The NBA embraces all fans with open arms this time of year.

Where to start? The 2017 NBA Draft Combine is underway. The lottery will soon determine the fate of those teams (un)lucky enough to have their names scribbled on pingpong balls. All the while, the playoffs look like a bracket ready to spit out the Cleveland Cavaliers and Golden State Warriors in the Finals yet again.

To top it all off, these happenings light the rumors mill ablaze. This offseason doesn't have the allure of, say, LeBron James going back home or Kevin Durant embracing the villain role. But it does have notables such as Carmelo Anthony and Paul George headlining the show.

So for those who left, come on back. For those still around, enjoy the show.

Don't sleep on the Toronto Raptors blowing up the roster up this offseason.

It's clear the Cavaliers have the Eastern Conference in a chokehold, hence the sweep of the Raptors in almost casual fashion. LeBron continues to age but viewers would be hard pressed to actually believe such a fact of nature. For the Raptors specifically, it doesn't help that Kyle Lowry and DeMar DoRozan are two of the worst star playoff performers of their time.

With Lowry heading to free agency, the Raptors might try to clear even more cap space by moving center Jonas Valanciunas, a nugget mentioned by ESPN.com's Zach Lowe recently.

"Trading Jonas Valanciunas loomed as the alternate cost-cutting measure, but no one needs a center. The most likely Valanciunas deals would return someone else's unwanted big fella," Lowe wrote.

Valanciunas is a traditional center. There was nothing wrong with that even five years ago, really. But it's a problem now because while Valanciunas is 7'0" and 255 pounds, the game keeps moving to smaller lineups and big men who can't run up and down the floor or space it with shooting aren't valuable (hence him getting 25.8 minutes per game this year).

So maybe the Raptors want to move Valanciunas, maybe not. Whether a team actually wants his skill set is another conversation entirely. 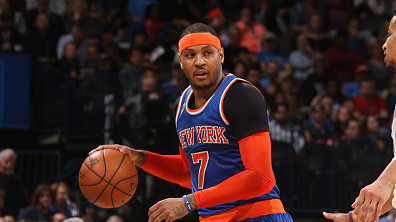 We can pen the above subhead with confidence because it's hard to imagine Carmelo Anthony is a member of the New York Knicks next year.

Anthony has always remained adamant he wants to stick with the Knicks and help build the team into a contender, a nice legacy-defining goal that seems to be fading by the minute. Team president Phil Jackson outright saying Anthony should probably leave town isn't helping things.

This puts Anthony in a bit of a pickle. Which team wants a 32-year-old forward on the downswing of his career set to have a cap hit north of $26 million in each of his next two years, per Spotrac, is hard to say.

The Miami Heat don't sound interested, at least, according to Barry Jackson of the Miami Herald: "One person in touch with the Heat said he does not expect a Heat pursuit of Knicks forward Carmelo Anthony, who's available via trade."

On one hand, team president Pat Riley knows how to rebuild his team with the gentle snap of a finger. On the other, he has plenty of cash tied up in Goran Dragic, has a young forward by the name of Justise Winslow he wants to keep grooming and seems committed to keeping the youth movement going with Dwyane Wade out of the picture.

If a team like the Raptors might blow it up because nobody can stop LeBron, a team like the Heat likely works from the basis that Anthony isn't the proverbial missing piece necessary to seize the conference.

Anthony has quality years left as a scorer, but at least one notable buyer in recent years doesn't have an interest in making the investment.

Like it or not, the Indiana Pacers have a Paul George problem.

George wants to win championships. It seems like a logical thing to say about any superstar, but George's situation is especially perilous. He loves his hometown Los Angeles Lakers, according to Mitch Lawrence of Sporting News, and he only has one more year on his current deal.

Indiana's inability to surround George with enough pieces to contend in LeBron's conference is highlighted by Larry Bird stepping down from his duties as president recently.

Where does that leave George and the Pacers?

Conventional wisdom suggests a small-market team like the Pacers would love to keep George in town for the long term. If he qualifies for certain media-voted teams, they can even offer him a bigger extension than any other team can offer.

But will the Pacers want to? Maybe not, according to Nate Taylor of the Indianapolis Star: "But some in the franchise, according to sources, are unsure whether the Pacers would be willing to sign George to such a lucrative deal to keep him."

How's that for an interesting development?

In a way, it makes sense. Paying George that much to stick around might only eat into the funds needed to even help him compete in the Eastern Conference. Some in the Indianapolis front office might think the odds of competing for a title in the long term are better if they build in a more traditional sense through the draft.

Interestingly enough, Lowe recently noted the Lakers might offer up prospects in a trade for George, which would mesh quite well with Indiana's rebuilding plans.

This feels like the world's easiest game of connect the dots. But the Lakers would need to want to give up valuable assets in the first place while knowing the Pacers might not want to pay George at all. And with such knowledge out there, the Pacers might not be able to get back the return they'd prefer in a trade.

So, yes, George's situation this offseason, even though he isn't a free agent, is by far the most interesting thing happening.