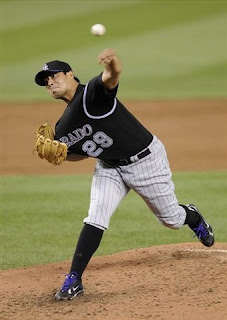 There are Rockies fans everywhere with purple faces, and it has nothing to do with face paint and team spirit. It has everything to do with them not breathing for a full half inning. Eight innings of excitement for Rockies fans were followed by one inning of hair pulling, heart racing gut wrenching baseball that ended up in the Rockies favor–barely. The Rockies held on for a 4-3 victory over the Giants, giving them a more comfortable 3-1/2 game lead in the NL Wild Card race.

For eight innings Jorge De La Rosa put on an absolute clinic. In his eight innings the lefty gave up just three hits, he walked two, and struck out nine. His biggest inning came in the sixth when De La Rosa gave up a four pitch walk to Nate Schierholtz before giving up a bloop base hit on an 0-2 pitch to pinch hitter Rich Aurilia. Both runners advanced a base after a wild pitch, putting two Giants in scoring position with no one out and the top of the San Francisco lineup ready to step to the plate.

Three months ago, De La Rosa would have collapsed. The only thing unpredictable about the result would be how the Giants would deliver, it seemed as if De La Rosa could find a new way to blow up every single game.

That Jorge De La Rosa, however, is nowhere to be found.

The ninth is when it got really interesting. With the Rockies up 4-0 Jim Tracy elected to go to interim closer Franklin Morales. Morales gave up three straight hits and a run before Tracy had seen enough. With runners on first and second base and no one out Rafael Betancourt stepped onto the mound in the toughest save situation in his career.

The Rockies were looking for a double play to get them closer to the win. That is exactly what happened when Juan Uribe hit a tailor-made ground ball to Troy Tulowitzki. Tulo rushed the ball to second baseman Clint Barmes who watched the ball hit his glove and trickle into the outfield. Just as the Rockies breathed a sigh of relief, the defense made it even more stressful.

With the tying run at third base, and still no one out, Betancourt did a masterful job.

He got Edgar Renteria, who had hit a grand slam off of him last time in San Francisco, to hit a lazy pop fly to Barmes at second base. Then he got Aaron Rowand to ground out to Todd Helton, allowing the third run of the inning to score. With the tying run in scoring position, Betancourt dug deep and got Schierholz to strike out on a 2-2 pitch, allowing the Rockies, along with the state of Colorado to let out quite possibly the largest sigh of relief in the Rockies 17 year history. As ugly as the ninth inning was for the Rockies, the win gives them a commanding three-and-a-half game lead in the Wild Card race with just 15 more games on the schedule.

The game will be remembered for the last inning, as it should be. However, ask any member of the Rockies organization why this team won the ball game and there will be no answer besides Jorge De La Rosa.

His value to this team cannot be understated. In April he found himself in danger of losing his spot in the rotation after starting the year 0-6. With the win on Wednesday night he finds himself with a 15-9 record. He is tied with Jason Marquis for the most wins on the ball club after not recording his first win until June.

The lefty has figured out what was holding his career back after three organizations gave up on him, despite his ace-like repertoire. His lack of success had nothing to do with him not being able to throw a good slider, or throw a fastball for a strike, but rather his problem was in his lack of confidence.

When bad luck seemed to strike De La Rosa, instead of battling through it and finding a way to minimize the damage, he would get down on himself. His body language would turn to a mope and those watching him on the mound could tell that he was wondering whether he was good enough to be pitching at that level.

After working hard, and even sitting down with the team councilor on a regular basis, De La Rosa has been able to forget everything that happened in the past and focus on what he can do at that exact moment. It has turned his career around, and on a must-win game in San Francisco, gave the Rockies a little more breathing room in their hunt for the playoffs.

The 2020 playoffs raised a lot of questions. How will each team answer theirs?

Winter Meetings Will Be Held Virtually Amid COVID-19

Winter Meetings Will Be Held Virtually Amid COVID-19