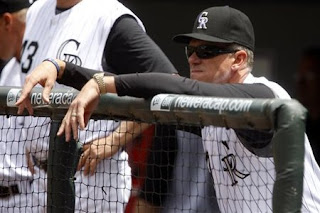 Make no mistake, Jim Tracy is the reason that the Colorado Rockies have a firm hold on the National League Wild Card race.

That said, Jim Tracy’s run of pushing all of the right buttons has come to an end.

When Tracy took over for Clint Hurdle on May 29, the Rockies were 12 games under .500 and 15-1/2 games out of first place in the NL West race. They were vastly underachieving and could not find their identity.

3-1/2 months later, the Rockies are a team that is known for never quitting, and finding a way to win on any given night. More importantly, they are known as a playoff contender.

With Tracy at the reins, things changed immediately. Clint Barmes was moved to the two-hole in the lineup, giving him the protection of hitting in front of Todd Helton. Tracy also planted struggling third baseman Garrett Atkins on the bench in favor of emerging star Ian Stewart.

Both moves paid off immediately. Barmes went on the biggest tear of his career, watching his batting average shoot above .290. He was hitting doubles and hitting home runs that was unmatched by any second baseman in baseball, including Philadelphia slugger Chase Utley.

Stewart became less hesitant at the plate and found a rhythm and his power stroke. He also brought a better glove with him to third base, improving the defense on the infield.

Beyond the lineup, Tracy also made a huge impact on the team’s pitching.

Clint Hurdle was known for sticking to pitch counts. Rarely would a starting pitcher throw more than 100 pitches. Regardless of the situation, Hurdle would go to his bullpen once the starting pitcher finished out the inning that he hit 100 pitches in.

The bullpen was a whole different story. Hurdle was known for going with the “hot hand” out of the ‘pen, which sometimes worked in his favor, but often times resulted in pitchers not knowing their role. In baseball, if there is one thing that a player hopes for, it is stability.

Tracy changed that quickly. Brad Hawpe was quoted as saying that he felt that Tracy made fewer decisions with his gut than Hurdle. He was more methodical about it and because of that, players knew their role.

However, in recent weeks, especially since the rosters have expanded after Sept. 1, it seems that Tracy is over-managing. Instead of methodically having a game plan, it looks as if Tracy has started to manage with his gut.

He is being too fine with the players and trying to force the situation, instead of relying on the talent he has on the field and letting the game play out.

One example is Barmes. The second baseman is well known for his defensive wizardry. He makes a great play nearly every day at second base, saving the starting pitcher pitches and runs.

The problem with Barmes, however, is that he is mired in a slump that has lasted since the All Star break and has seen his .290 batting average drop to .242 after an 0-for-3 performance at the plate on Sunday.

Since his tear in June, the league has figured out that Barmes struggles with breaking balls low and away. They are not strikes, but he cannot lay off of them. The league has adjusted to Barmes, but Barmes has yet to adjust to the league.

When Barmes steps to the plate, the outcome has become annoyingly predictable. He will either hit a weak pop up to the second baseman, or simply strike out on a pitch in the dirt.

His problem is that he is trying to pull everything to the left side, which makes him way in front of the off speed pitch, causing the pop up. Barmes has not figured out how to keep his weight back and foul off pitches that he cannot drive.

Despite Barmes’ struggles, Tracy has stuck with him. He refers to his excellent glove work at second base as his reasoning.

The problem is, with Barmes in the lineup Tracy helps his pitcher get one or two extra outs every night, but he sacrifices four outs at the plate.

Often, those four outs at the plate come with runners in scoring position when a base hit or a sacrifice fly would really help the team. If his glove is the reason he consistently starts, there is no reason that glove man Omar Quintanilla should remain stagnant on the bench.

He is every bit as good defensively as Barmes, but is better at playing small ball at the plate. He is quite capable of laying down a quality bunt or hitting a ball in the air when he needs to.

The better option, however, is to play Eric Young Jr. at second base. While scouts have said that his defense is sub-par on the infield, he has shown an ability to create an energy on the field and produce at the plate.

Young also possesses the ability to steal bases with his blazing speed. He creates a whole new dynamic for the Rockies lineup, but yet remains on the bench while Barmes continues to play his undisciplined style of baseball at the plate, hurting the Rockies' offensive rhythm.

Tracy has mixed and matched well since taking over, and is well deserving of the honor that most likely will be bestowed upon him of Manager of the Year.

However, his decision to leave Barmes in the starting lineup consistently is hurting the Rockies chances of capturing a playoff berth and winning their first-ever National League West championship.