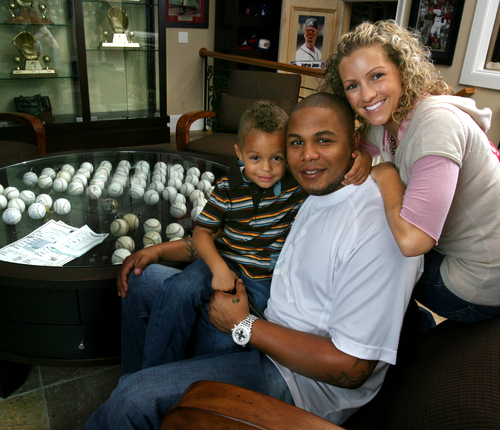 Andruw Jones pictured with his family is making a bid for the AL Comeback Player of the Year Award after his disastrous 2008 season with the Dodgers.

Jones was released by the Dodgers after the 2008 season and the Dodgers lost millions of dollars by signing him and will be paying Jones through 2014.

I was surprised the Braves didn’t sign him despite his bad season in 2008 because they could have signed him to a contract barely over the minimum major league salary.

The Braves have shown again this season they need some offensive help in the outfield. The outfielders have hit a total of 21 homers this season but that is an improvement over the 2008 outfield which hit less than 30 homers combined for the entire season.

Jones would have been a better option than signing Garret Anderson, considering they would have a Gold Glove center fielder in Jones.

Since his career 2005 season when he slugged 51 homers, the career of Jones has been in a tailspin. That year was followed by seasons of 41, 26, and three homers and he seemed to be washed up at the end of last season.

Jones needs only 15 homers to reach the 400 homer plateau and will be 32 all this season. He should be getting more playing time in the second half after playing in only 47 of the first 84 games played by the Rangers.

If he continues to hit with power the next few years, he has an excellent chance of hitting 500 homers and possibly 550 homers.

If he continues to hit well the rest of the season, he should win the Comeback Player of the Year Award for the American League. His 2009 contract includes a stipulation that he will receive $200,000 if he does win that award.

Jones has earned $102.4 million during his baseball career according to baseball-reference.com through the 2008 season. That doesn’t include the money owed to him by the Dodgers or the $500,000 base salary he will be paid by the Texas Rangers in 2009.

It will be interesting to see how Jones does with increased playing time in the second half of the 2009 season. The Rangers should be even better offensively in the second half if Jones hits well and Josh Hamilton can stay healthy the rest of the season and hit like he did last season.

Jones has come a long way since appearing to be washed up and barely making the Rangers, who had a plethora of outfielders who could hit well.

At 32, he may have many good seasons left but he has a lot to accomplish if he expects to make a speech on a summer day in Cooperstown, New York in the 2020s.