Here is what the Husky roster will look like after the end of the 2010-11 season (Assuming the Huskies end up with Josh Smith ).

Darnell Gant F
Scott Suggs F
Elston Turner G/F
Isaiah Thomas G
Juniors:
Clarence Trent F
CJ Wilcox G
Abdul Gaddy G
Sophomores:
Desmond Simmons F
Josh Smith F
In two seasons, Matthew Bryan-Amaning, Justin Holiday, Charles Garcia, and Venoy Overton will all be moving on.
There is also a chance Isaiah Thomas chooses to leave for the NBA at the end of junior year, or he might have already left at the end of his sophomore year.
There is also a strong possibility that Abdul Gaddy chooses to enter his name into the NBA draft after his sophomore year.

This means there are four scholarships open for sure, with two potential slots open as well. That leaves 4-6 scholarship spots to be filled by potential recruits. Whatever the end number is, it is evident that this class is important in shaping the Husky program for the future.

Here are the players that Romar is taking a look at to fill his roster with:
Tony Wroten may be one of the best players to ever play basketball in Seattle.
Veteran observers of basketball talent in the Seattle area have claimed he is the best they have ever seen of any talent at his age.
Right now, Wroten is only a sophomore in high school and he already had two offers from both Washington and Louisville. If the Huskies can land him, he would by far be the most-heralded recruit Romar has ever had.
Signing Wroten would set the tone for Romar's recruiting and potentially give him momentum in signing other highly-sought players. 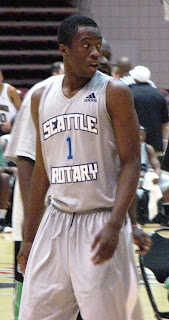 Angelo Chol is an up and coming Center from San Diego, California.
He is a little under-sized height wise at 6'8", but he is only a sophomore and probably is still growing.
He is the fifth ranked center in the Class of 2011. Although his post skills are not fully developed, he has the ability to hold position in the post, and its just a matter of time when he begins to dominate the painted area like Josh Smith.
He has a nice jump hook and can also hit the occasional 15 foot jump shot. He currently has two offers on the table from UW and Arizona St. He also has interest in Florida and UCLA. 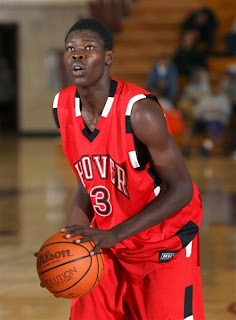 photo source
We profiled shooting guard Gary Bell back in March, and he was the second player the Huskies offered a scholarship to after Wroten.
I cannot but help to think about Adrian Oliver when looking at Bell. His best asset is his scoring ability, he averaged 19 PPG this past season.
He currently measures in at 6' and 170 lbs. He has a chance to lead his team to a championship after falling short by losing in a 4A semi-final game.
If Isaiah Thomas decides to leave early, Bell's recruitment becomes that much more important. He will be a guy to keep an eye on if you live near the Seattle area. 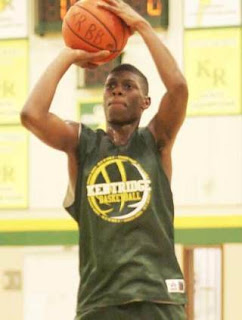 What's your take on the potential Class of 2011 for the Huskies?

‘The Shop’ returns with a special episode ahead of Election Day. Tap and watch LeBron and Barack Obama Friday, 9pm ET

How Teams Should Handle Their FAs 🔍

Big decisions for every team this offseason. @AndrewDBailey looks at how teams should handle their own free agents ⬇️

How Teams Should Handle Their FAs 🔍

The NBA and NBPA extend deadline to Nov. 6 for either side to serve notice on terminating CBA