After Terrelle Pryor's first four starts of 2013 as the starting quarterback of the Oakland Raiders, it appeared as though he could be the future of the franchise. Pryor completed 68.3 percent of his passes with four touchdowns and two interceptions in those starts.

In the past three games, Pryor has completed just 53.2 percent of his passes with one touchdown and seven interceptions. It's pretty clear that Pryor has either regressed as a passer or the Raiders were just able to hide his deficiencies for the first few games.

Pryor's ability to make plays with his feet is second to none, but if he's going to be a franchise quarterback, he's also going to have to be a competent passer. Although the Raiders don't have a great offensive line or receivers, Pryor is mostly to blame for his own regression.

If Pryor did well for four games with basically the same supporting cast, a regression can only be on him or the coaching staff. It's true that the offensive line and, to a lesser extent, the wide receivers aren't helping him, but that has been an issue all season. Pryor needs to make the plays when he gets the opportunity, because he isn't going to get a ton of help.

Oakland's offensive line isn't great, and that certainly has impacted Pryor. In fact, Pryor's struggles started in Kansas City, where he was sacked nine times and pressured virtually all afternoon.

While it's easy to blame Pryor's poor play on the offensive line that would be to ignore his obvious struggles. Pryor would be better with a good offensive line, but so would any quarterback. The ability to handle pressure by adjusting protections, finding hot reads and manipulating the pocket are a big part of a quarterback's job.

On the third play from scrimmage, Pryor hit Denarius Moore for a gain of 27 yards after running around behind the line of scrimmage and throwing off his back foot in the end zone. While fun to watch, it was a dangerous throw that Pryor was lucky to complete.

The better play for Pryor would have been to execute the play as designed, and he had Juron Criner wide open on the shallow cross. Although the offensive line allowed quick pressure, there was no reason Pryor shouldn't have been able to get Criner the ball.

Left guard Lucas Nix and left tackle Khalif Barnes looked like well-greased turnstiles on the play, but instead of stepping up through the pressure and flipping the ball to Criner, Pryor bails out to his right. Pryor ends up being cut off to the outside.

Pryor has an amazing ability to make plays with his legs, but they can't always hide his weaknesses and those of his supporting cast. As the season has progressed, it seems like the pressure is just as much in Pryor's head as it is real.

At the end of the half against the Eagles, Pryor threw the ball away when he got quick pressure. Sebastian Janikowski was still able to hit the 53-yard field goal, so this was another example of a poor play that didn't hurt the Raiders.

Pryor had a timeout to work with, so he should have flipped it to Rashad Jennings to pick up a few yards. A few yards in that situation would have resulted in a higher percentage field-goal attempt. Just because Janikowski was able to render the play moot, doesn't mean Pryor couldn't have made a better play.

The first two examples didn't even hurt the Raiders, which is why they were highlighted. Pryor's teammates are occasionally picking him up, even if they are also letting him down. The offensive line can certainly get better, but Pryor needs to make the plays when they are there to be made.

Pryor also still makes too many plays that leave you scratching your head. When there is pressure, there is a good reason why Pryor might not be seeing open receivers.

Pryor ends up getting sacked on this play and nearly fumbles after trying to run back to his left. You don't see wide receivers this open very often, but Pryor didn't throw the ball. The play was by design, so it's even more puzzling why Pryor made the decision he made.

Pryor drifts and fades in the pocket often and tries to extend plays instead of manipulating the pocket and trusting his receivers to get open. It wouldn't be hard to make the argument that Pryor isn't running enough when those receivers don't get open.

When Pryor was doing well for the first four games, he was making one or two quick reads and then using his legs to pick up whatever yardage he could. The Raiders may have given Pryor a little too much too fast in an attempt to stay ahead of defenses.

On this 3rd-and-4 from the 26-yard line, right guard Mike Brisiel allows quick pressure. Instead of taking the running lane and picking up the yards himself, Pryor runs backward and to his left and is ultimately sacked.

Even a non-running quarterback would recognize in this situation that the best course of action would be to get the first down with his legs. Pryor tries too hard to make plays with his arm, which is actually hurting the offense and his productivity.

Another example of what Pryor needs to work on is throwing his receivers open. Receivers in the NFL aren't always going to be wide open, but they might be open enough to get them the ball. A good example came in the red zone against the Eagles with the Raiders trailing 7-0.

Criner runs a post route on 2nd-and-6 with a six-man protection scheme. Pryor had plenty of protection, and the linebackers were sucked in close to the line of scrimmage.

Criner's route was susceptible to being undercut by the defensive back unless Pryor threw it to a spot where only Criner could make a play on the ball. In this case, Pryor rolled out to his left, faded backward seven yards and threw incomplete for Criner trying to work his way across the back of the end zone.

Not every quarterback is perfect, but Pryor has a lot to work on before he's considered a viable passer. If it wasn't for Pryor's ability to make plays with his legs, he'd be one of the worst quarterbacks in the league. Pryor still has eight games to turn things around, but his lack of progress and regression in recent weeks isn't a good sign.

Pryor has an uncanny ability to make his supporting cast look both better and worse than they actually are. The receivers and the offensive line share some of the blame; this isn’t a Pryor-bashing piece that fails to acknowledge his weak supporting cast.

A defensive back blitz means that there is a linebacker covering Rod Streater, but Pryor isn't able to escape the quicker defender to exploit that mismatch. Out of an empty set, the blitzer is Pryor's responsibility and there has to be a hot read.

It's on Pryor to identify prior to the snap where the blitz might be coming from and make the appropriate check at the line of scrimmage. Streater then has to recognize the safety blitz and adjust his route to give Pryor a quick throw. We'll give Pryor the benefit of doubt here and say that Streater made the mistake.

Receivers are getting open as Greg Olson has done a fantastic job calling players, but Pryor isn't finding them or doesn't have the time to find them. The receivers need to do a better job of adjusting to the defense to give Pryor a safety valve when defenses send blitzes.

Injuries have been a problem, but more so run-blocking than in pass protection. The biggest issue has actually been starting left guard Lucas Nix, who Pro Football Focus has graded the worst player in football (subscription required).

Against the Eagles, Brisiel also had a horrible game. Even with hot routes and Pryor's ability to use his legs to escape pressure, pressure that comes through so quickly is tough on a young quarterback.

Coming into the game against the Eagles, Pryor was the least blitzed quarterback in the NFL, according to the Fox color analyst Tim Ryan. This is partly because he's been so good when blitzed and partly because teams don't need to blitz him when they can get pressure without the blitz.

Pryor is like a lot of quarterbacks in that he's a lot less effective when under pressure. Pro Football Focus data supports this assertion, as Pryor has a negative-14.8 grade under pressure and a positive-5.5 grade when not under pressure.

The lack of protection could certainly be one of the reasons we haven't seen more progress from Pryor. Pryor is concerned about pressure, so he can't really work on the other aspects of his game that need improvement.

A good start for getting Pryor back on track would be benching Nix, encouraging Pryor to use his legs to run for positive yardage when his first couple of reads aren't open and getting more help from the wide receivers. In the end, it's still going to be up to Pryor to make the most of his opportunities.

There is a lot to like about Pryor from his off-the-field demeanor to amazing athletic ability, but he still has a lot of work to do. Pryor and the Raiders will look to get back on track against the New York Giants on Sunday. 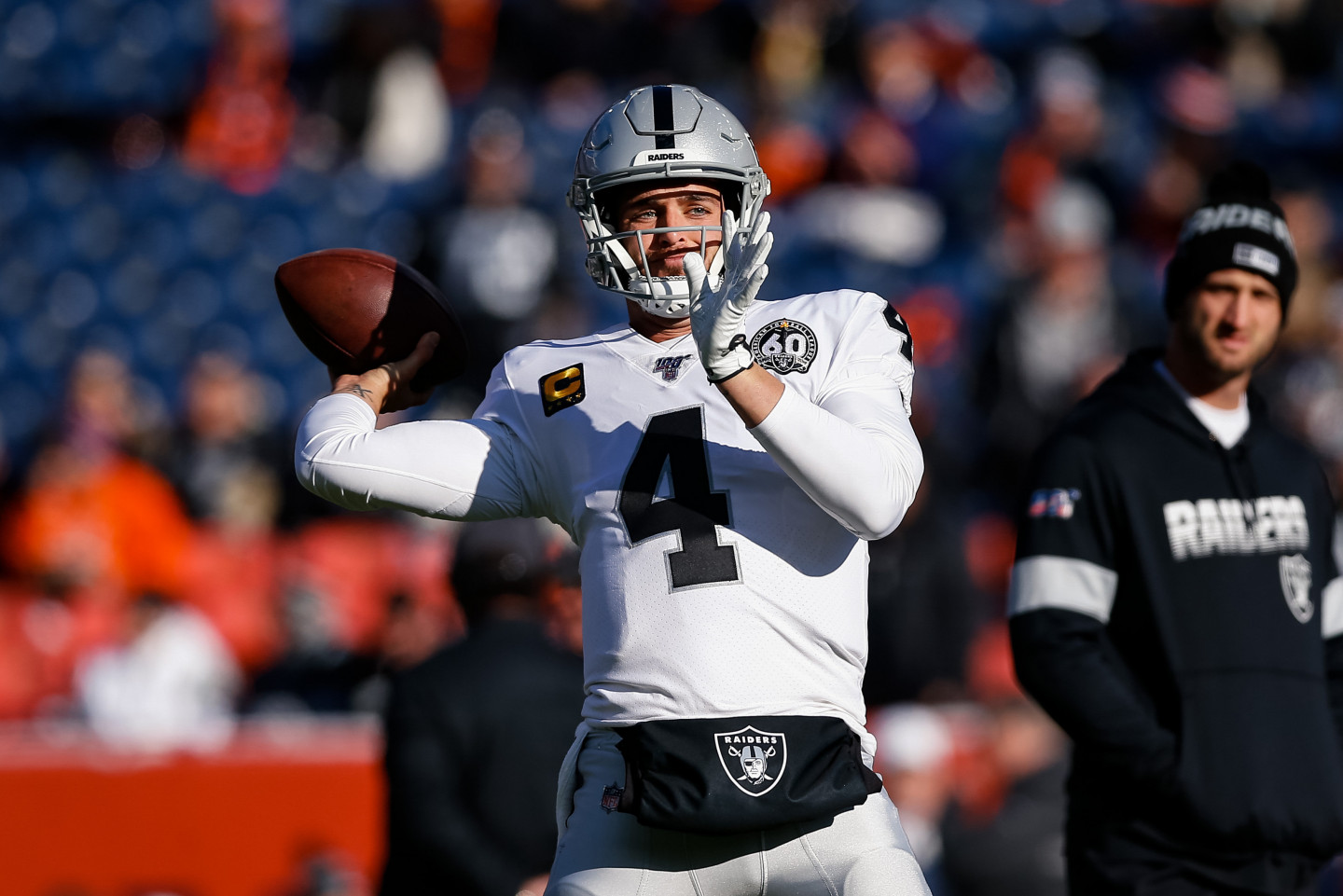