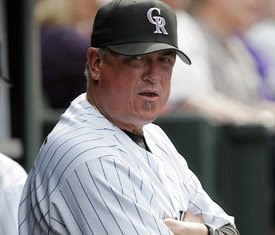 After a 97-minute rain delay in Pittsburgh, the Colorado Rockies came back from the clubhouse flat and found themselves on the short end of a 7-4 score.

It's not as if the Rockies never showed up. In fact, after the top of the second inning the Rockies held a 3-0 lead on a double by Ryan Spilborghs and a home run from Clint Barmes.

Then came the bottom of the third inning.

Aaron Cook, an All-Star, and lone bright spot in a dark 2008, gave up four runs in the bottom half of the third inning, quickly giving up the lead that his offense bought him.

After the rain delay, the bullpen did not fare much better, and the offense could only muster one run the rest of the way.

The Colorado Rockies have become so predictable. A game like Saturday night's becomes so typical that it would be a complete shock if the squad did not play as they did.

Usually the word "flat" is used to describe a team that has a bad game, or a bad streak, where it seems as if they had a late flight and never really got into their groove. It happens when a team is noticeably tired, or when they have seemingly given up on a game before it is even close to over.

It is when it seems like everyone on the team is thinking about something else, anything but the task at hand.

The thing about the term "flat" is that it is supposed to be used on rare occasions.

When they face a top notch pitcher, instead of changing their approach they simply swing. They strike out like it is going out of style.

When their starting pitcher doesn't have it, instead of fighting to get some runs off of the oppositions starter, they simply roll over and wait for tomorrow.

On a night like Saturday, when the offense shows up, it can disappear somewhere in the clubhouse of a 97-minute rain delay.

In the first few weeks, it was easy to blame the failures on bad luck. It was easy to say that it was early and the team was yet to play in sync. That excuse was legitimate in April.

As the middle of May approaches, and the Dodgers' lead over the Rockies closes in on double digits, the excuse that the Rockies are not hitting on all cylinders just doesn't fly anymore. They have had their chances to get in sync.

The fact of the matter is, these Rockies are not a good team.

They may have talent. They may have a drive to win. They can pitch and they can hit, but they can't play as a team, something that Manager Clint Hurdle always prides himself in.

The fact is, something has to change. This problem is not just a 2009 problem. This is the exact issue that held the club back in 2008.

Early in '08, Colorado could blame the pennant hangover. That excuse worked for April and May of '08. For the last 12 months, there has been no excuse for the failures of this team.

If the talent is on the team and the depth is there, but the results are still lacking, there is only one direction to point.

The fact is, while the Rockies remain hopeful, they are not playing as if they have any chance or thought of playing meaningful games in September and October.