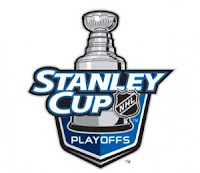 Someone please help me out with this one.

Okay for the second time in as many games, the NHL has scheduled two playoff games on the same night one half-hour apart. I can understand that, of course, as all teams involved are East Coast teams. Sure no one wants a game to start at 9:30. I do get that. For cyrin’ out loud, show the frickin’ games though.

I live in the DC metro area, so naturally, I’m going to see the Caps regardless. Versus has the NHL contract, so I understand they have the rights to the NHL playoff games.

For the local games here in DC though, the local sports channel shows the game. Okay. Fully understandable. They want in on the cash cow that is NHL broadcasting.

What I absolutely do not get is that when the local sports channel shows the Capitals game, Versus blocks out the channel; completely blocks it out!

I know for an absolute fact, with today’s television technology, they have the ability to show one game in one area and another in a different viewing area. In fact, now that the Caps game has just ended, Versus will now show the remaining half hour of the Boston-Carolina game.

Please tell me why they cannot give up the right of the local game to the local sports station and show the remaining game. You can explain to me about money and rights, bla bla bla. You cannot, however, convince me it’s better for the league to one, schedule two out of two playoff games at the same time, and two, not show both of those games.

Someone gets an F for that one!