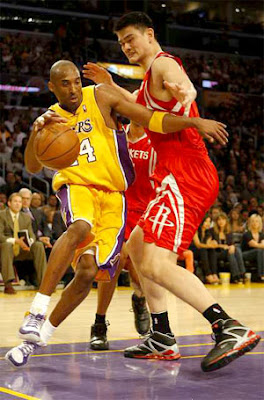 NBA Playoffs Second Round Match–Up
No. 1 Los Angeles Lakers vs. No. 5 Houston Rockets

The Lakers didn’t have to wait long to find out who their second round opponent would be, as the Houston Rockets took care of business at home and dispatched the talented, young Portland team.

This will be a tough series for the Lakers due to the fact that it is the playoffs. The regular season does provide an indication of what to expect, although it must be said that the intensity and level of play are higher in the playoffs.

The Lakers have Andrew Bynum back and are at full strength; however, he failed to get on track in the Jazz series.

The Jazz still have some players nursing injuries. The Lakers were 4–0 in the season series against the Rockets by the following scores:


The Lakers, as expected, beat the Utah Jazz, but did show signs of a leaky defense and issues maintaining leads. The Rockets come into round two after impressively dispatching the young Portland Trail Blazers in six games.

The Lakers, led by All-Stars Kobe Bryant and Pau Gasol and a deep bench, are facing a tough defensive team in the Rockets whose defense appears to have improved in the playoffs. Both teams are seeking to build on their success in round one.

The Rockets are elated to have finally advanced to the round two and feel that they’re ready to beat L.A. The Lakers know what areas of their game that are in need of improvement and have been working to correct them in practice. A key will be to not to come into the series too confident or complacent.

Brooks doesn’t have the size to consistently be effective against the Lakers' long front line. He will have to have success shooting outside. Derek Fisher did what he had to do in round one, but will have to knock down timely shots to stretch the defense.

Shane Battier has been in the starting lineup numerous times due to injuries of himself and Wafer. Von Wafer has started some games, but has been dealing with back spasms but will play. The combination of Battier and Ron Artest will take turns defending Kobe.

Both are solid defenders.  Placing Battier on Kobe will affect his offense and the Rockets need him to knock down three-point shots. Kobe is on a mission to win another ring. He will be a nightmare for whoever attempts to guard him. He has played the role of facilitator early and closer late.

Ron Artest will start out checking Ariza but will have to exert a lot of energy guarding Kobe Bryant. Artest's offense, like Battier’s, will suffer due to the energy needed to defend Kobe.

Ron Artest was up and down in the first round series but has shot badly against the Lakers this season.  He attempted 36 shots from three point range in the series against the Blazers and made only 10. Artest could be highly effective in the low post.

Trevor Ariza is a slasher who will attack the basket. He will have difficulty scoring on Artest but will need to remain active and could help get Artest into foul trouble. His improved scoring and range has been a huge surprise for the Lakers all season.

Luis Scola is a talented player that can score around the basket. He isn’t a shot-blocker but is a solid rebounder. He was very effective on pick-and-roll plays where he would spot up for a mid-range jumper instead of rolling to the basket.

This will be a key play for the Lakers to contain. Lamar Odom is a starter but he was asked to come off of the bench to impact the game with the second unit.

Odom is a huge key for the Lakers; his activity on both ends of the court are vital for the team’s success because he has the potential to average a triple-double. He will be a match-up nightmare for Scola attacking the basket.

This is a match-up of two All-Star centers. The Rockets do a good job of establishing Yao Ming early in the game but tend to go away from him being a focal point of the offense late in the game.

Yao is a tough match-up for whoever defends him but he is content being a decoy and getting his teammates involved. Pau will have to stay grounded and play good position defense and force Yao to take a contested shot over him.

The same will apply for Andrew Bynum when he faces Yao as a starter or as a reserve.
Pau is a talented offensive player with a wide array of moves around the basket, but his deadliest attribute is his ability to pass the ball and find his teammates.

This is a match-up that Yao has to win for the Rockets to be competitive in this series. The Lakers respect his talent as well as look to take him out of his game by attacking the basket, hopefully getting him in foul trouble early.

For the Rockets, Von Wafer played well in the first round and enjoys playing against his former team. He has scored 20+ points against the Lakers twice. Kyle Lowry, Carl Landry, and Chuck Hayes have all had success and were effective in the first round.

For the Lakers, Sasha Vujacic, Andrew Bynum, and Jordan Farmar have struggled to make an impact. These players have the talent to be effective but haven’t put it together as of yet. Shannon Brown has been effective bringing the team energy and solid defense, as well as knocking down shots. He was 6-for-9 from behind the arc in round one.

Prediction
This will be a tough series that the Lakers will win in five Games.