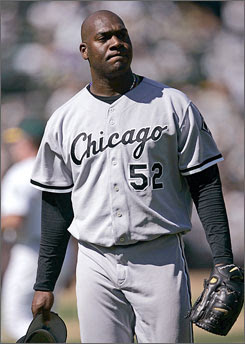 I always wonder about how managers deal with the various attitudes and personalities on a roster. Baseball is a marathon, not a sprint; which means there are going to be lots of ups and downs. It's easy to deal with a player when he's going good, but what about when he's not going good?

For example, take look at the following quotes from Ozzie Guillen and pitching coach Don Cooper regarding SP Jose Contreras. Contreras has had success in the majors before, but is struggling right now:

"It's not his velocity. ... It doesn't look like he has the confidence now to
let the ball go," Guillen said.
Chicago pitching coach Don Cooper said,
"We've got to get [his confidence] back. That's our focus," Cooper said. "He's
frustrated. Everyone wants better results."

How exactly will Cooper and Guillen bring back Contreras's confidence? Is that by working with him on his mechanics daily? Or how about giving him a pep talk? How about watching a previous game where Contreras pitched well? Or could it be as simple as doing nothing and letting Contreras build up his confidence naturally? Player personality should play a big role in determining how the coaches bring back his confidence.

In addition, should Guillen skip Contreras in the rotation to let him work on his stuff or keep throwing him out there hoping that he figures it out? Would removing Contreras from the rotation completely kill his confidence?

And one thing that I've wondered is, does a player's position matter in how a manager deals with him when he's struggling?

For example, Angels relief pitcher Scot Shields is off to a terrible start in 2009, which Mike Scioscia attributes to his confidence:

"Scotty's just not repeating pitches," Scioscia said. "What makes him so good is
that he's almost like a gunslinger out there. He's fearless and he goes after
hitters and finds a way to make pitches. Right now that confidence level isn't
there, and that presence on the mound isn't there. But he'll get it back."

Because Shields is a relief pitcher, will Scioscia try to bring his confidence back by throwing him out there in big spots as to say, "hey, I know you're struggling right now, but I believe in you." The hope there would be that Shields would follow up with a couple of good performances in a row, which could pull him out of his funk. Or maybe Scioscia would try to ease Shields back into the swing of things by having him pitch in a less pressure packed situation, such as the 6th or 7th inning in the hopes that Shields responds to less pressure by throwing the ball better.

If you had the choice, how would you handle Scot Shields?

It's fascinating to note how differently these two situations will be handled. The goal remains the same: bring back the player's confidence, but because Shields is a relief pitcher, he will have many more opportunities to pitch. Contreras, on the other hand, has four days in between starts to think about his poor outing and work on his mechanics for the next one.

Confidence is what you make of it. Some say it's acquired, while others say your born with it. Either way, we can see through Shields and Contreras the issues that might run through the mind of manager or coach as he tries to help a struggling player.