I think I’d be hard-pressed to find anyone who seriously predicted the Tampa Bay Rays to win the American League East in 2008. They shocked everyone by going from 66 wins and the majors’ worst record in 2007 to 97 last year, en route to making a World Series appearance in their first postseason. They are young and full of upside-laden talent, and that talent gelled into a championship contender almost overnight. But that begs the question: what teams have a chance to pull a Tampa Bay in 2009?  There are a handful of teams that are similar to the Rays going into 2008, in that they have plenty of young players with big upside.  The Detroit Tigers shocked the world in 2006 and the Colorado Rockies in 2007. So lets look at the teams that look like they could do it this year.

Don’t laugh. This team finally looks like it has the right amount of young talent to have a breakthrough campaign, and they made some shrewd moves in the off-season to guarantee at least slight improvement. Because the Royals have been so dreadful since the 1994 strike season, people my age don’t realize- and older generations forget- that the Royals used to be one of baseball’s best teams and biggest markets. Peter Gammons’ blog today got the idea for this article rolling, and he does a good job selling this team to us.

With a rotation led by young star Zack Greinke, they look to have a solid foundation of pitching. Gil Meche is good enough to be a #2, and Kyle Davies has some upside that he could reach as soon as this season. There are several candidates for the final two rotation spots, including the recently-signed Sidney Ponson. In a move that was probably to take some pressure off Greinke, Meche has been tabbed their opening-day starter. But Greinke should be the ace, and if he has a Cy Young-caliber season, this could be one of the toughest rotations in the league. The bullpen, meanwhile, lost Ramon Ramirez and Leo Nuñez to trades, but still has Joakim Soria who emerged as an elite closer in 2008 and could eventually be a top-of-the-rotation starter, which is what he really wants to be. They acquired Kyle Farnsworth via free agency for added depth.

The offense for Kansas City is by far their biggest candidate for improvement in 2009; after all, it’s pretty difficult to be worse than their 691 runs scored in 2008- an average of only 4.27 runs a game- and .269 team batting average. There are young, high-upside talents in the lineup, led by Alex Gordon, the second-overall pick in the 2005 draft. Gordon had a stellar college career but has yet to live up to his lofty expectations. But he is still only 25 and this year would make sense for him to break out. He’s been encouraged to take a more relaxed approach this spring, and that could translate to a big jump in his numbers. The lineup also includes Billy Butler, who also has yet to live up to his expectations but entered camp in better shape than last year. For now he’ll be splitting time with new acquisition Mike Jacobs, but could win the starting job if he has a good April. Another great new acquisition for them is Coco Crisp, who will provide a good leadoff bat, plenty of steals and much-improved center field defense.

The Royals aren’t without their flaws, but neither are any of the other AL Central teams. The Tigers or Indians might not have enough pitching. The White Sox are in transition and could have bullpen issues beyond Bobby Jenks. And the Twins’ lineup beyond Joe Mauer and Justin Morneau doesn’t exactly scare anyone. So this could be the year the Royals shock everyone by making a huge turn-around. I don’t think a 10-win improvement is out of the question, and a 90-win season would be overwhelmingly shocking to the masses but shouldn’t be. This team has some nice talent just waiting to break out.

(Video Courtesy of Protect the Plate)

I wrote an article earlier this month about the Reds and their hopes to turn around what has been a miserable last few years. They have plenty of young talent, some that has already broken out and others that could as soon as this season.

Edinson Volquez leads the rotation along with fellow flamethrower Johnny Cueto, and Volquez has already proven to be ace material. If he can keep up what he did in 2008, and Cueto takes another step forward, they could be the most formidable 1-2 punch in the division. Aaron Harang can only improve upon his abysmal 2008 in which he lost 17 games and saw his strikeout rate drop like an anvil, and looks to be heading in the right direction after his latest outing. Bronson Arroyo had an up-and-down 2008 but is still one of the most solid mid-rotation starters in the league. Homer Bailey is the wild card of the group, and could finally pitch up to the expectations to which he’s been held for a few years now. If he does, they could have one of the best rotations in the entire national league.

As much potential as their pitching staff has, the Reds’ lineup has even more. Jay Bruce has long been one of the top prospects in the game and at 21 is good enough to break out this season. Even if he doesn’t, it won’t be long before he becomes a five-tool superstar. He can hit for average and middle-of-the-lineup power, has above-average

speed and a strong arm, and could be the next Jim Edmonds in center field. Yes, he’s that good. And he’s been really putting his game together this spring. Joey Votto is another young star on the Reds who had a mini-breakout in 2008, hitting .297 with 24 home runs and 84 RBI. Brandon Phillips already has a 30-30 season under his belt, and 2008 was considered an off year despite going 20-20. Edwin Encarnacion had a streaky 2008 but ended up with over 20 home runs anyway.

It will be very tough for the Reds to even sniff the division title in 2009 with the Cubs aiming to repeat, but it’s not too much of a stretch to predict this team to finish second or third. I think they’ll at least make it over .500, and a breakthrough season cannot be ruled out.

I know the Marlins weren’t that bad in 2008. In fact, they were pretty good. But I still see room for a big improvement. Like, 97 wins-big. Despite what some people may think, the Marlins are one of the most well-run organizations in baseball. They have a 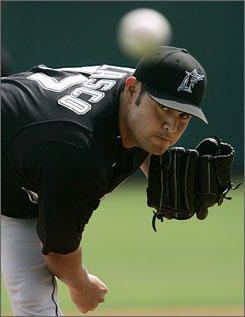 great team of scouts that contribute to them always drafting top-end prospects, while floundering for a few years to get top picks. Then when they have enough young talent, they compliment them with veteran presences that give them a World Series contender. Then once they win the championship, they have a firesale for younger prospects and the cycle starts all over again. It’s pretty brilliant, even if they are always in the basement of league attendance.

This year, they do not have too many veterans but this young group is getting better and could easily be this year’s version of the Rays. Ricky Nolasco has already had his coming-out party with 15 wins, a 3.52 ERA, 1.10 WHIP an 186 strikeouts in 212 innings, and he still may only be the third-best pitcher in the rotation. Josh Johnson and Andrew Miller are beasts who have yet to put it all together, but if they do this year could give the Marlins the best top-3 in the NL East. Their bullpen, despite losing Kevin Gregg to the Cubs, is also improved with the additions of Leo Nuñez, Kiko Calero and Scott Proctor. Matt Lindstrom played for Team USA in the World Baseball Classic and should be the closer to start the season.

As for offense, it does pretty much revolve around Hanley Ramirez. Not much needs to be said about him; 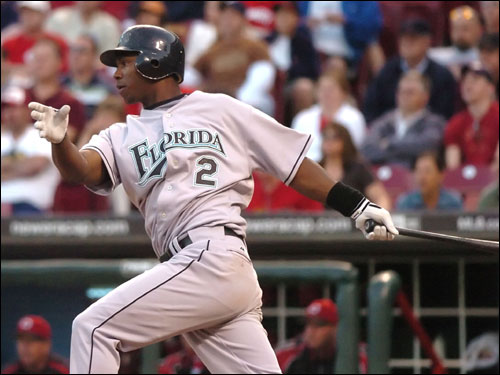 he’s one of the two or three best all-around players in baseball. He will hit 3rd this season after batting leadoff to start his career, with new addition Emilio Bonifacio likely taking over leadoff duties. Cameron Maybin- one of their top prospects and one of the big prizes of the Miguel Cabrera deal along with Miller- is another candidate. Despite trading away power hitters Mike Jacobs and Josh Willingham for more speed, they still have power in the middle of the lineup with Ramirez, Jorge Cantu, Dan Uggla and Jeremy Hermida filling it out.

With their added speed and strong young pitching, this team is looking a lot like the 2003 team that won the World Series. Is Josh Johnson this year’s Josh Beckett? It’s about as probable as it was for Beckett in 2003, so take that for what it’s worth. But even in the loaded NL East, the Marlins look like a strong candidate to be the season’s biggest story.

In terms of likelihood, the Marlins look like the best bet to have a breakout season, since they’ve already proven they can play above-.500 ball. But after doing my research on these teams, none of them would really surprise me if they broke through. It’s tough to gauge how the AL and NL Central divisions are going to play out in 2009, so if the Royals and Reds break out they could even contend for the division. If the Marlins win the NL East, they will win the World Series. Call that a prediction.