"The Bulldog", as Orel is known, wanted to give Dodger fans a treat by having fellow 1988 World Series hero and current Arizona Diamondbacks manager Kirk Gibson catch his first pitch.

Gibson respectfully declined the offer and had this to say about it:

"I'm a Diamondback," Gibson said. "I'm the manager of the team. I respect Orel tremendously. He knows that. It's not disrespect towards him. If I was out of baseball I would have done it, but I'm in baseball and I've got different colors on tonight and tomorrow."

One would have to respect Gibson's decision; he is somebody who takes team loyalty very seriously and didn't want his players to see him do something symbolic for the opposing team.

Dodger fans were still treated to a nice moment as Clayton Kershaw stepped in to catch Hershiser's pitch.

Gibson is still loved by Los Angeles, and many believe his number should have been retired by the team many years ago. Although the retirement of his jersey would open the floodgates for many other well deserving Dodgers. 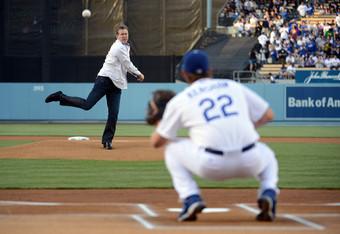 Historically the Dodgers only retire the numbers of players who are inducted into the Hall of Fame.

While it would have been very nostalgic to see "Gibby" catch a pitch from Hershiser, his declination wasn't surprising.

Gibson will most likely not be in the best of moods on July 31. That's when his Diamondbacks return to Dodger stadium.

Kershaw ‘Fired Up’ for 2020, with a Little Added Excitement

Kershaw ‘Fired Up’ for 2020, with a Little Added Excitement