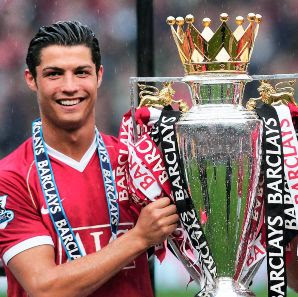 The 23-year-old Portuguese star is the first from his country to win the coveted "Ballon D'Or" award, which is given by France Football, since Luis Figo in 2000.

CR7 has spoken often about his chances of winning this despite protestations from opposing fans. At one point he actually declared himself not only the best footballer in the world, but second and third too.

He scored a remarkable 42 times in 49 matches as United secured a memorable league and European Cup double.

This award has been presented since 1956 by the French football magazine France Football, it is awarded to the player considered to have performed best over the previous year. The first to lift this honour was Blackpool player Stanley Matthews.

Prior to 2007, the player had to be a member of a club based within UEFA's jurisdiction in order to qualify for selection; and until 1995 a player also had to be of European nationality to be eligible.

The 2007 change in rules saw players from Qatar, the United States, Mexico, Brazil, and Argentina named on the shortlist alongside those from European clubs.

Since October 2007, 96 football journalists from around the world have decided the winner from a shortlist of 50 compiled by France Football.

Add this title to the fact Manchester United are current Premier League Champions and Champions of Europe things look rosy right now. Ronaldo is also favourite for the World Player of the Year too.....and I don't think many will argue with that!

Can Manchester United also go on to win the World Club Cup in Tokyo too? The mind boggles.