Philadelphia Phillies: 10 Reasons the Phillies Should Consider a 4-Man Rotation 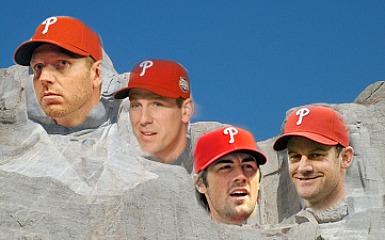 In a December to remember, the Philadelphia Phillies acquired the most-coveted MLB free-agency gem in Cliff Lee.

Lee gave the Phillies their fourth legitimate ace and the group was christened R2C2.  This group has the potential to be historically good, which has gotten a lot of people thinking: Why do they even need a fifth starter?

While the Phillies have not expressed any interest in a four-man rotation in the regular season, with four pitchers that are this good, talk has to be going around.

This list is devoted to analyzing why the Phillies might consider going to a four-man rotation in 2011.

A 4-Man Rotation Can Still Have Days to Rest 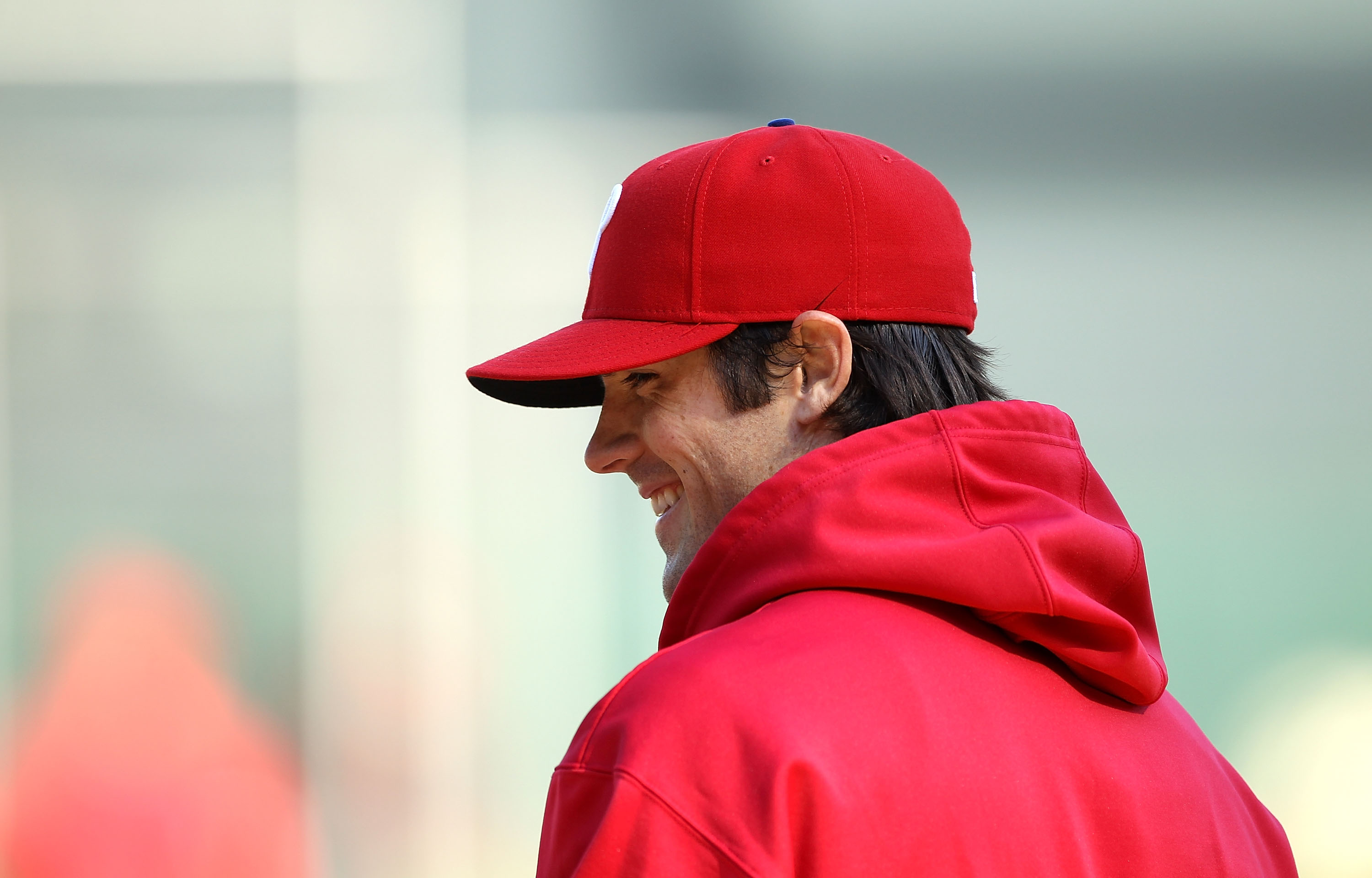 Let’s look at it this way: If the Phillies were to go to a four-man rotation, they would not be looking for each starter to pitch 40-42 games in the regular season; that would be too much.  The Phillies would still give their guys a day off every now and then, and have someone like Vance Worley or Kyle Kendrick pitch for a start.  This would still constitute a four-man rotation.

Because the pitchers can be given days off, they will probably only pitch about 38 times this season.  This strategy would not weaken the pitchers’ arms much because if they ever felt overworked, they could ask for one of their days off.

Roy Halladay Is Accustomed to Pitching a Lot 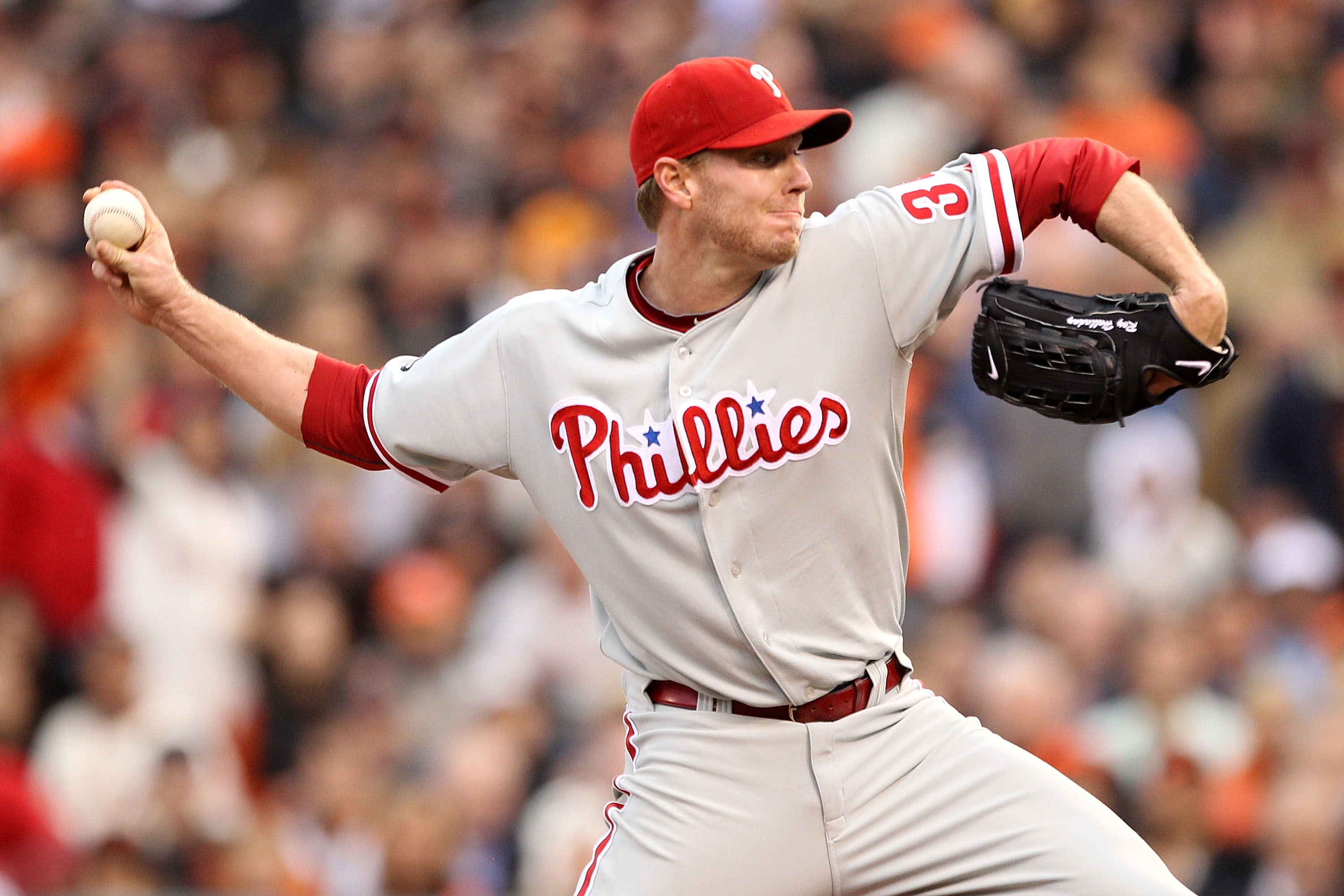 Naturally, going to a four-man rotation would entail all of the four to pitch more often and more innings.  This adjustment would not be such a monumental change for Roy Halladay.

The seven-time All-Star and two-time Cy Young Award winner has pitched over 220 innings in seven seasons, including the last five straight.  Halladay’s most innings pitched in a season was 266.  If the starters were to all make 38 starts and pitch an average of seven innings each start, that would be exactly 266 innings pitched.

In 2010, Halladay averaged about 7.5 innings per start, which would mean that in 38 starts, we would see a new career-high (which is no surprise).

Since Halladay has pitched more than 220 innings in each of the last five seasons, he looks ready to set a new career-high.  From 2009 to 2010, Halladay pitched 11.2 more innings, a feat which he could repeat in 2011.

Even if the Phillies do go to a four-man rotation, they won’t let Halladay pitch nine complete games again because they know it will be a long season.  This means that Halladay would probably only pitch about 270 innings in the season, which would not be a big change.

Roy Oswalt Can Pitch As Much As Halladay 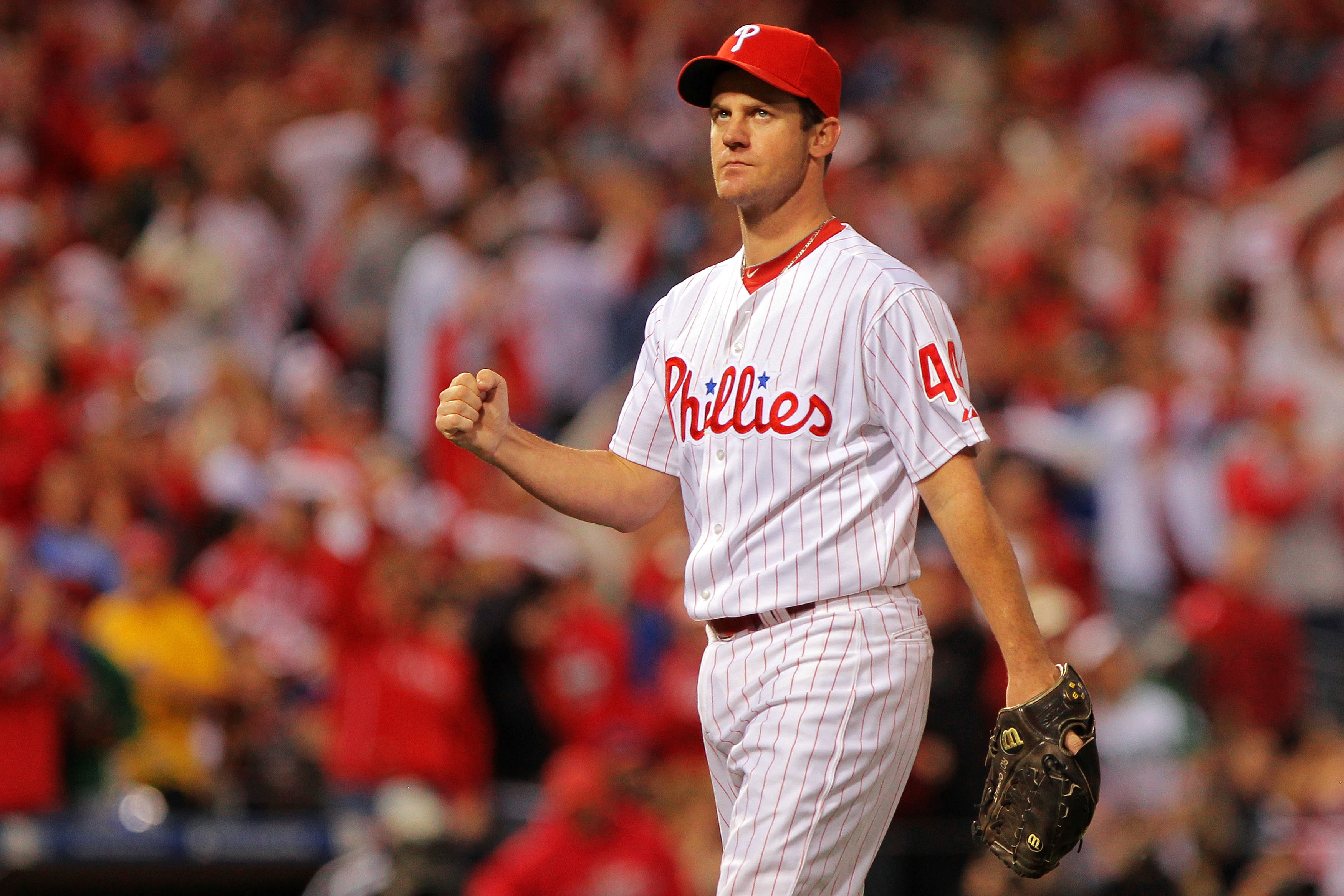 Roy Oswalt, the three-time All-Star, has handled a big workload in his career.

Oswalt has pitched over 200 innings seven times in his career and made 35 starts in a season twice.  As mentioned previously, if the Phillies went to a four-man rotation, each pitcher would probably have a few days off and pitch about 38 times in the season.  For Oswalt, 35 starts to 38 would not be a big jump at all.

Oswalt has always had the potential to pitch a lot of games in the season, even if he doesn’t pitch nine complete games like Halladay.  Oswalt often pitches into the seventh or eighth innings of games, but he does not complete them.  This means that Oswalt would be used to pitching about seven innings per start (maybe less) if the Phils go to a four-man rotation, so it would not be such a big change for him either.

Oswalt is looking for his first ring and he’ll do anything to get it.  If he has to pitch a career high in innings and starts, there’s no question about if he’ll do it.

Lee and Hamels are both good pitchers and it has been said that good players can adjust to any conditions.  This is yet another way for them to prove that they are some of the best pitchers in the game.

Lee wants to win his first ring and he knows that this season will probably be his best chance of his career, so he’ll do anything that’s needed.  Hamels is seeking his second ring, but he is still one of the most underrated players in the game today and he wants to change that.  Going to a four-man rotation and winning the World Series this season would be a great way for these guys to show everyone that they are not to be taken lightly and to show just how much they are worth.

The Fifth Pitcher Can Be Trade Bait 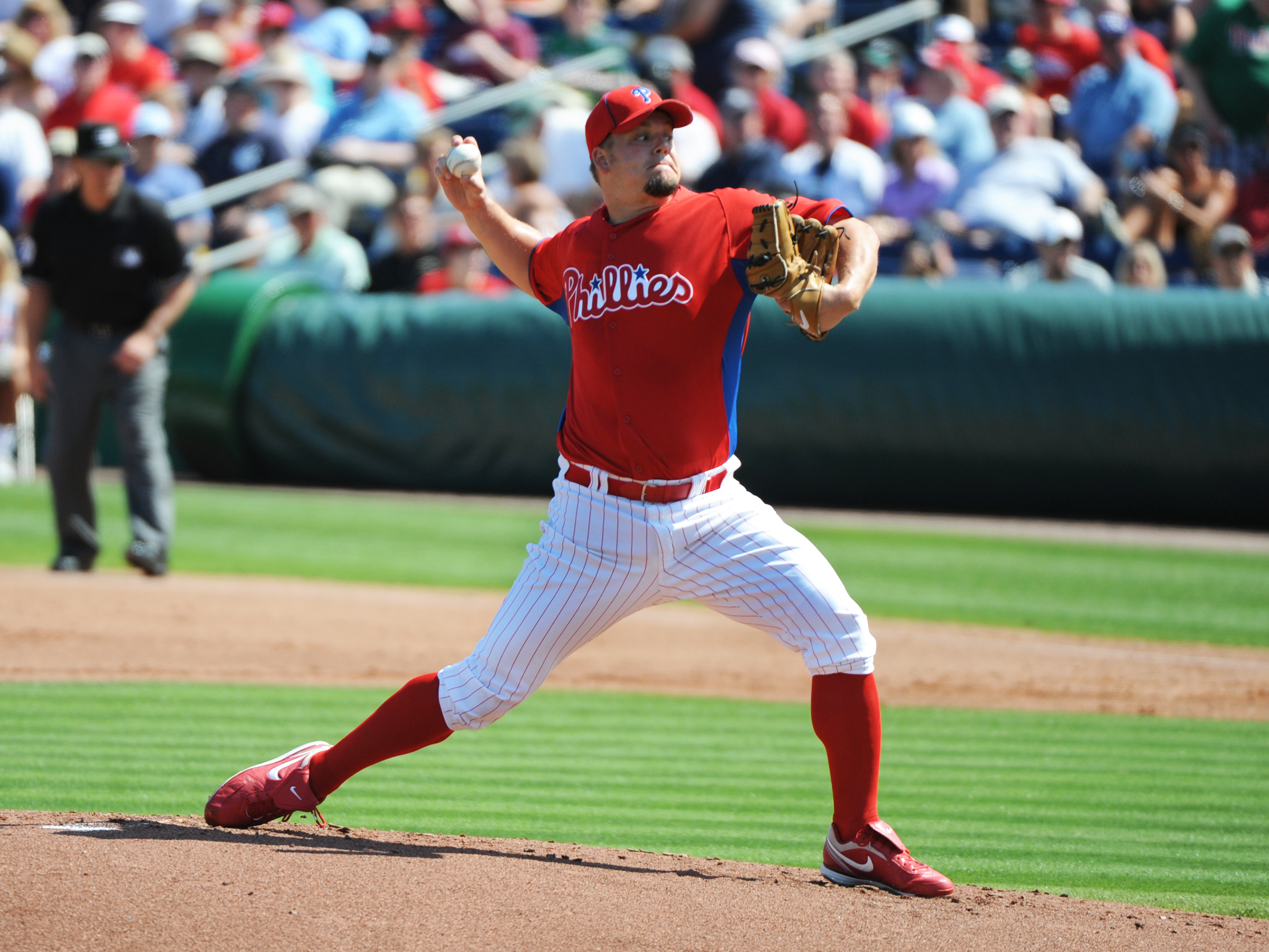 If the Phillies were to go to a four-man rotation, what would they do with the fifth guy?  They’d probably trade him.

If Blanton were to be cut from the rotation, they could get quite a bit from trading him to a team like St. Louis, which needs a pitcher because of injury problems.  The Phillies still need a good right-handed bat and trading Blanton would be a good way to get a decent right-hander who could play over half the season.

Say Oswalt were to be traded to St. Louis because he only has one more year on his contract and the option is pricey. They could trade Oswalt and Raul Ibanez for Matt Holliday to get a better outfielder and really make their lineup dangerous.  Sure, it’s a long shot that they would get Holliday, or even trade one of their aces, but it could happen.

The Phillies still have needs in the bullpen and in their batting order, so why not trade one of their guys to fill a hole?

Get Used to Their Playoff Rotation 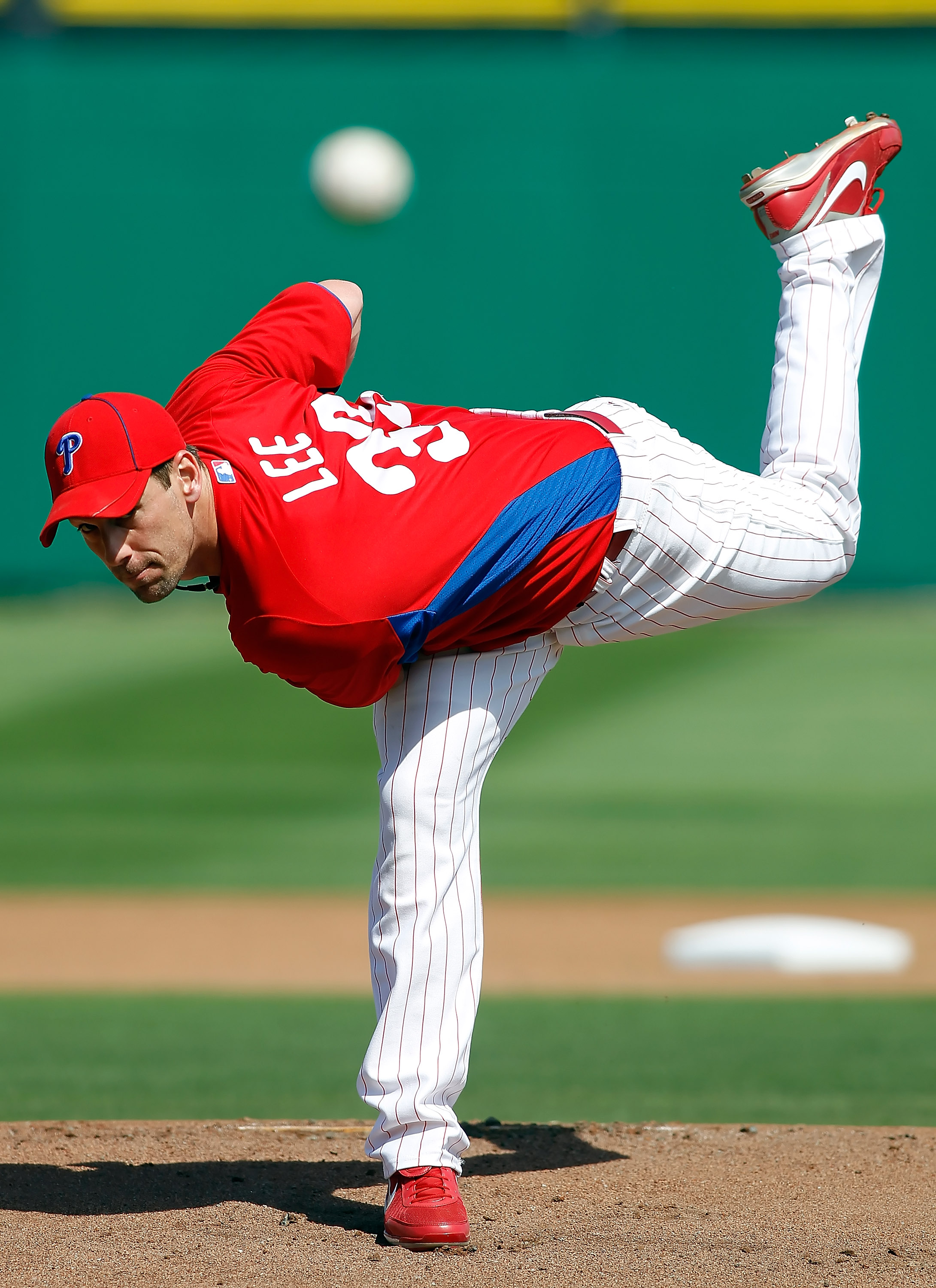 When the Phillies make it to the postseason, they will undoubtedly go to a three-man or four-man rotation.

In the last four years, the Phillies have always gone with a four-man rotation in the playoffs, so there really isn’t any reason to think that they won’t do it again.

The Phab Phour should probably get used to pitching in a four-man rotation since they will be in the playoffs when they prove whether they are for real or not.  Everyone is expecting a World Series title and nothing less, but if they are going to get it, they will need to be used to their four-man rotation.  Obviously, the only way to do this would be to use a four-man rotation in the regular season.

To Fight off the Braves 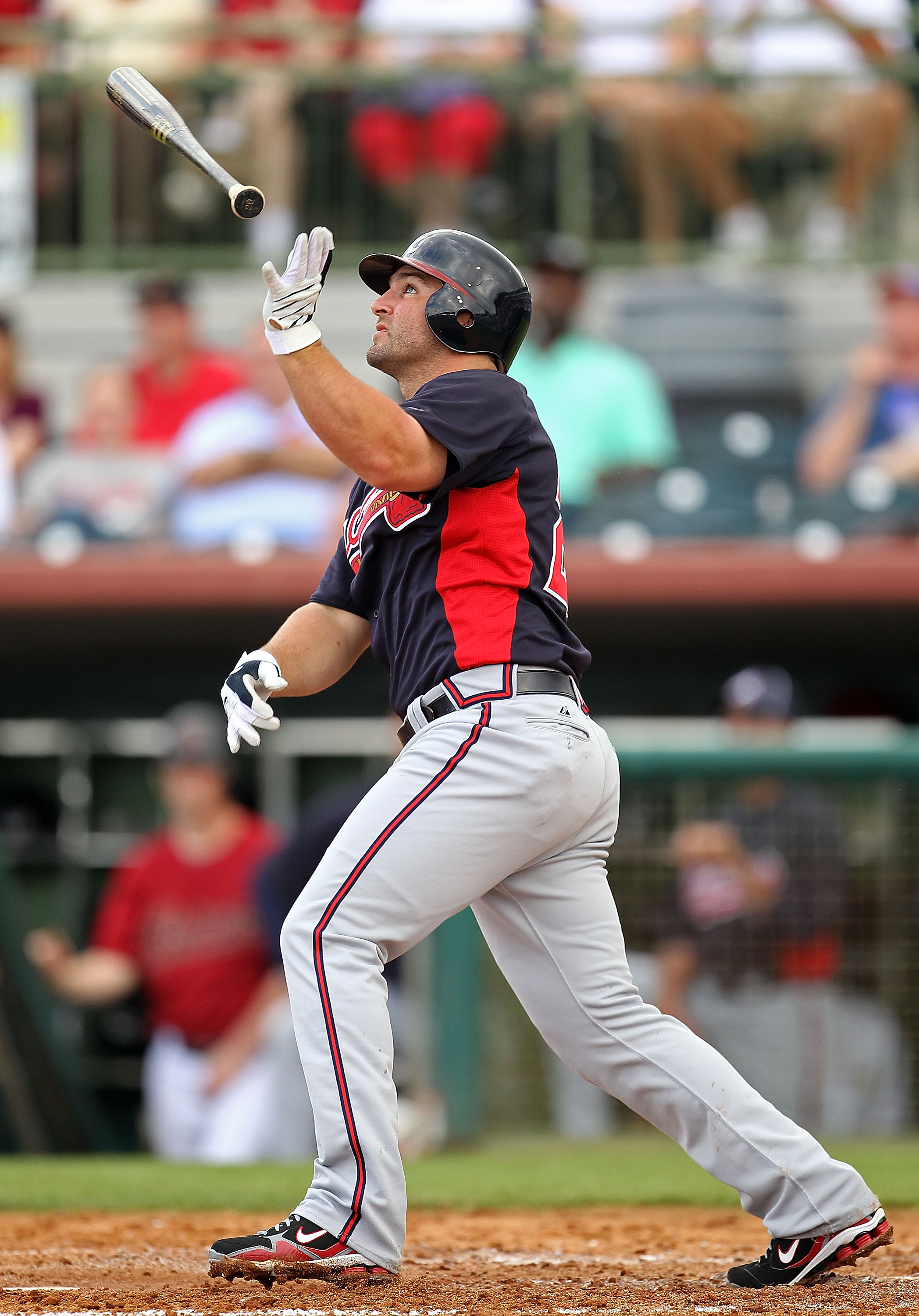 In the offseason the Atlanta Braves acquired second baseman Dan Uggla.  Uggla is an All-Star and a Silver Slugger, and he is obviously a big pickup.

The Braves’ only hole in the postseason in 2010 was at second base.  Uggla will more than fill the gap with his impressive offensive numbers.

With Uggla on their team, the Braves look very good and could potentially go one-two with the Phillies in the NL.  Because the Braves are so good now, the Phillies will need to fight them off this season and using a four-man rotation would do so.  If the Phils go with their Phab Phour, they will surely win more games and therefore put more distance between them and the Braves.

To Utilize Their Bullpen 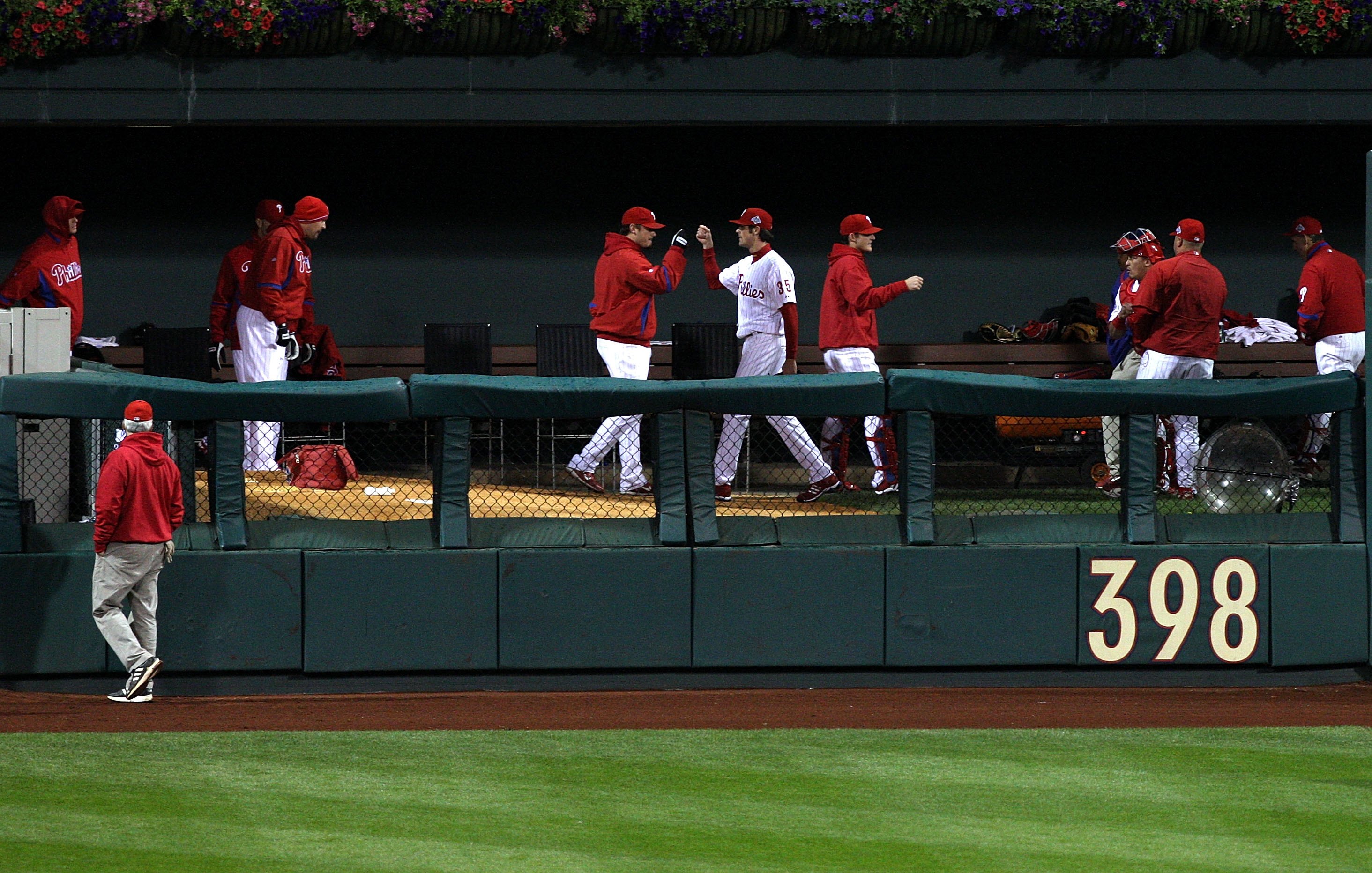 The Phillies’ current five-man rotation would not utilize the bullpen often.

With pitchers like Halladay and Lee, who can both pitch complete games just about every other start, the bullpen would essentially be a waste of space on the roster.

Of the Phillies’ five pitchers, the only one who can’t go seven or eight innings in almost every start is Joe Blanton.  That means that the bullpen would have to pitch more than two innings in a game once or twice a week.

While the bullpen did not look spectacular over the last two years, they have been improving. Brad Lidge and Ryan Madson are ready for a comeback, not to mention that Jose Contreras and J.C. Romero are both good relievers who should be utilized fully.

If the Phillies go with a four-man rotation, the pitchers would not pitch as many innings in every start and the bullpen could be used as much as most normal teams'.

To Cut out the Weak Link 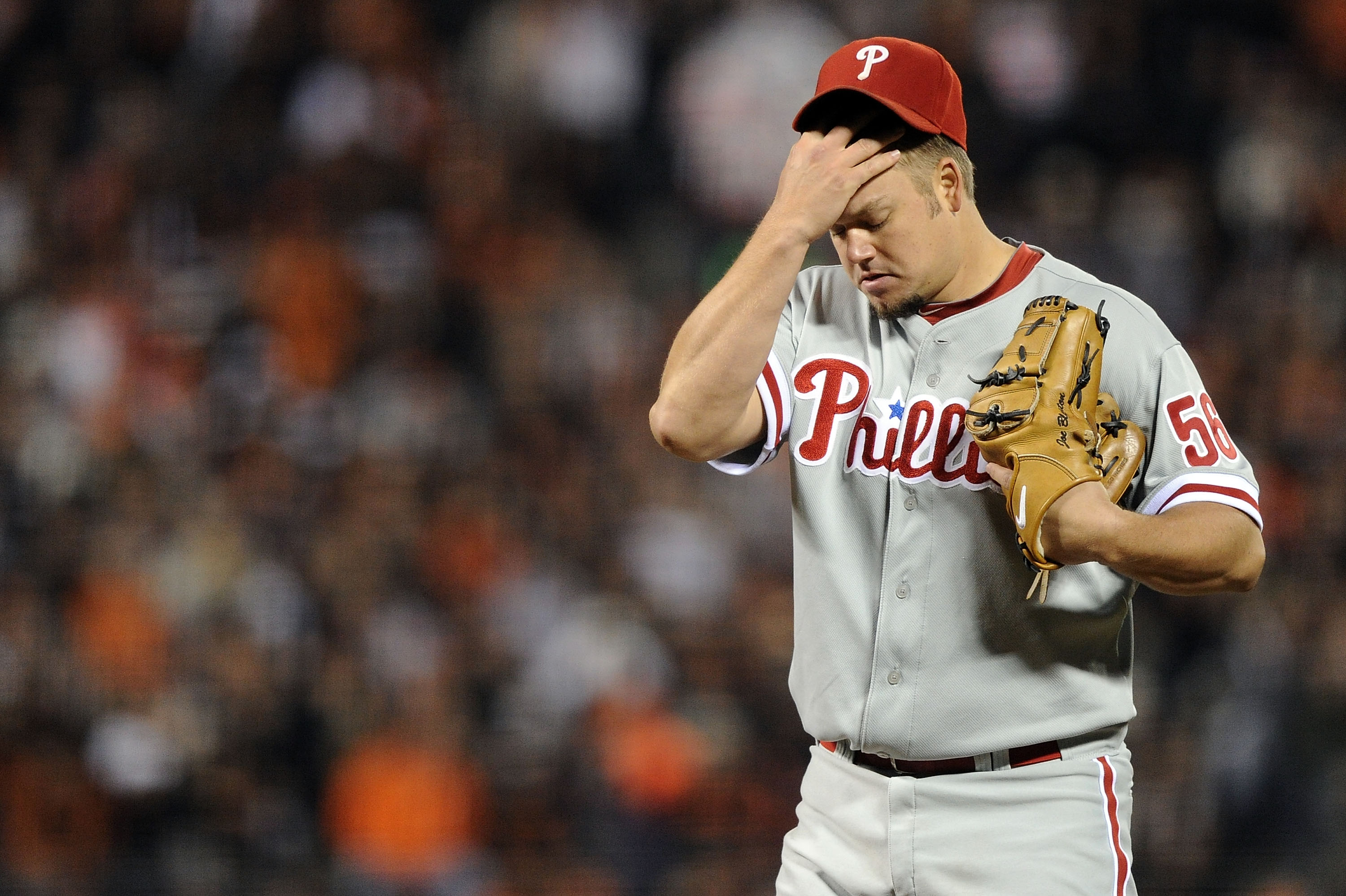 Odds are, if the Phillies go to a four-man rotation, they will probably get rid of Joe Blanton.

Blanton is currently the worst starter for the Phils, and he would be the one that other teams would have to attack to win games against Philadelphia.  If the Phillies were to demote, trade or release Blanton, however, there would be no holes in an amazing four-man rotation.

The Phillies have a chance to use four Cy Young candidates as their pitching staff and not have any weak links whatsoever.  If they were to do this, then they would become a historic team. 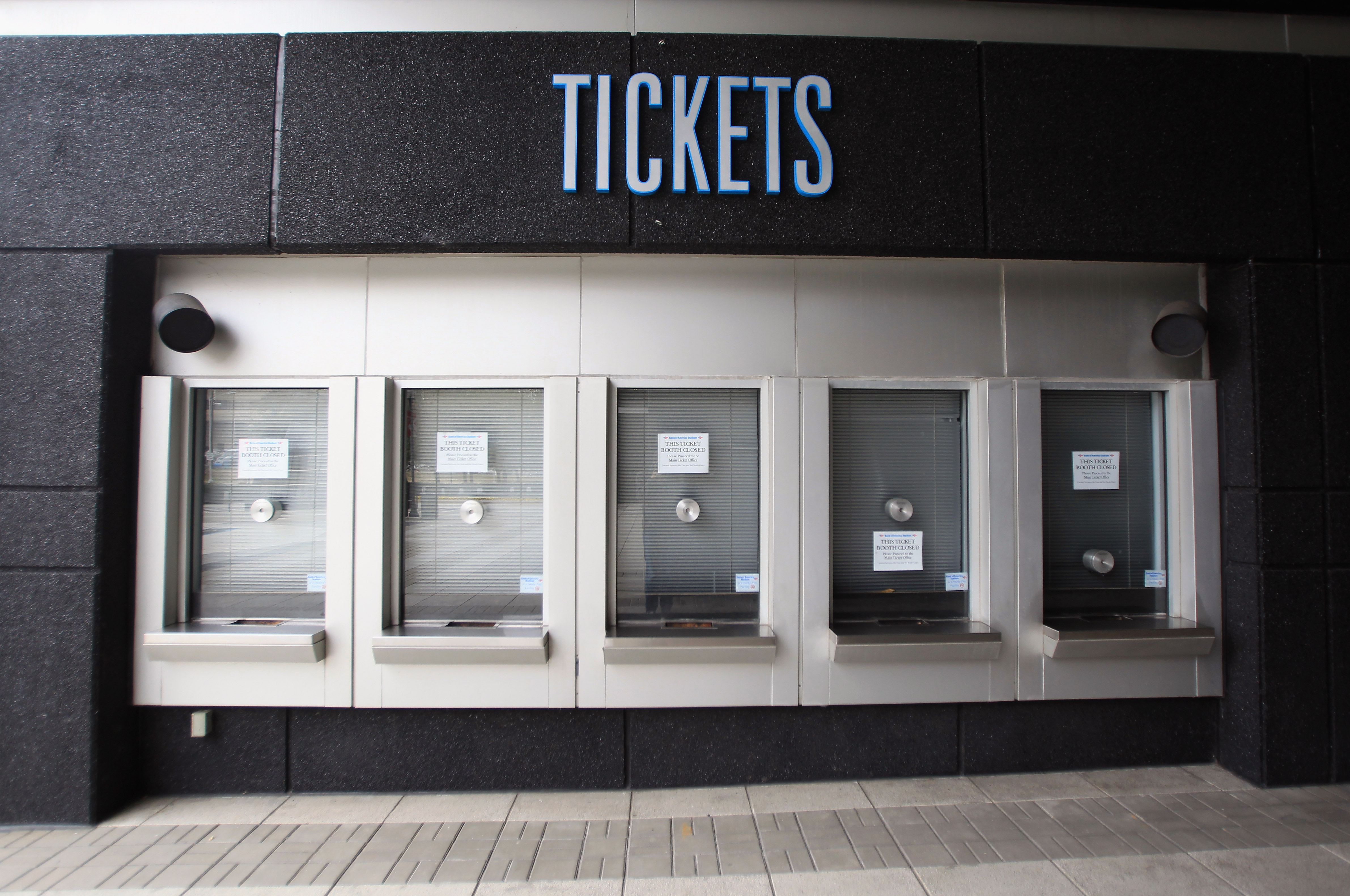 If the Phillies were to go to a four-man rotation, they could sell more tickets because in a rotation with four All-Stars, who would settle to see Joe Blanton pitch?  Ticket sales are usually the highest when All-Stars pitch because they keep the crowd interested.  If the Phillies only had R2C2 pitch, then more of their fans would come out to games to watch them.

As a Phillies fan, I would much rather see Cliff Lee pitch than Joe Blanton.

If ticket sales go up, the Phillies will have more money to spend and they can consistently bring in more talent, be competitive every year and build a bigger fan base by winning.  All of this can happen from the Phillies going to a four-man rotation.