Regardless of what sport they root for or what city they're in, they always seem to find that one team they can't stand and they'll do anything they can to hold them down, jeer them or explain them away.

Boise State is one of those teams that a lot of college football fans find easy to hate. But why is that? Why do so many fans hate this football team or the university itself? Have they done something to offend you? Did they insult you in some way, or does their continuous winning somehow make you bitter?

I grew up in California's Central Valley, right in the middle of Fresno State country. So, needless to say, I continue to follow Fresno State to this day.

That being said, unless the Bulldogs are matched up with the Broncos, I become a fan of Boise State because I want to see them do what no one wants them to do: Make it to the BCS National Championship Game in January.

Nothing would irritate BCS fans more than to see the team that plays on the "smurf turf" or what they call, and what I've heard called, "a gimmick," make it to the biggest game in college football.

Most would tell you that the Broncos shouldn't get anywhere near the game, for no other reason than the conference they play in. A team like this from a conference like that shouldn't even be mentioned in the same sentence as the likes of Alabama, Georgia or dare I say, Tennessee.

I talked with Nate Kuester of Fox 12 in Boise, Idaho yesterday afternoon and we got on the subject of Boise State. I explained that I believe Oregon to be the best team in the country and that the BCS title game will probably end up being Auburn and Oregon if things continue to go the way they've gone.

That being said, it's no disrespect to Boise State; it's the truth of the BCS, whether we like it or not.

Oregon has the highest-scoring offense in the country right now and could probably run just about any team off the field, save for a select few. They've been scoring at will, and there hasn't been much that anyone has been able to do to stop Darron Thomas or LaMichael James.

On the flip side of the coin, the Auburn Tigers are being led by one of the best players, if not the best in the country, quarterback Cam Newton. I'd go as far as to say he is the reason they are where they are at this moment in time.

Are they unbeatable? So far, yes. But with a showdown looming with Alabama at the end of the season, they'll have a chance to prove who they really are.

Another conversation that came up between Kuester and I was the fact that ESPN analyst Robert Smith has discredited Boise State's win over Virginia Tech earlier this season. In fact, he said the exact thing that most said about the Broncos' win over Oregon last season.

During the ESPN BCS show on Sunday, Smith said, "I'm trying to keep an open mind about all this. But I'm not so sure Boise State plays Virginia Tech today, they beat them."

No disrespect to Robert, but that's not keeping an open mind. That's having the same opinion as most "experts," so that's more of a closed mind.

For whatever reason, most people want to say that while Oregon got better last season, Boise State stayed the same, which is just not true.

By the same token, those same people will say that Virginia Tech is much improved, which they are, but so is Boise State. Play that game on a neutral field or, as I told Kuester yesterday, even play it at Virginia Tech's home field, and the result isn't any different.

You can't take a win away from Boise State for no other reason than what you believe could have happened had these two teams played later in the year, whether it was last year against Oregon or this year against Virginia Tech.

If you are going to do that, can't we hold that same line of thinking when it comes to LSU and Florida? A few weeks later, maybe Florida wins that game instead of LSU being gifted a win. So, does that mean we can discredit the Tigers' win at Florida?

Do you hear ESPN saying the exact same thing about other teams around the country or trying to discredit any other team in college football? No, and that's why I don't know how Robert Smith can say, "I want to keep an open mind," and then try and discredit them.

This is a Boise State team that, I believe, could give anyone a solid challenge.

In the Fiesta Bowl against Oklahoma, Boise wasn't given a chance to beat the Sooners. When they did, in a game that was called one of the best college football bowl games in history, the discreditors were quick to point out that the Sooners were without quarterback Sam Bradford, and the Broncos wouldn't have won had Bradford been able to play.

A year ago against Oregon, after the Ducks ran off seven straight wins in winning 10 of their last 11 games prior to their bowl game against Ohio State, people began to say Boise State wouldn't have beaten Oregon had this game been scheduled later in the year.

A year later, it was their win against Virginia Tech that was put under the microscope. Most of the college football world wanted to say just how bad the Hokies were, especially after their loss to James Madison the following Saturday.

Now, it's gone from "the Hokies are horrible, anyone could beat them," to "Boise State couldn't beat the Hokies if this game was later in the year." Which is it?

You can give me the SEC argument or the Big 10 argument of "they couldn't hang with a legitimate conference," but it's all hearsay. This Boise State team, not the one from five years or three years ago, hasn't played the Big Ten or the SEC this season. So the arguments are going to remain nothing more than opinion, no matter which way you slice it.

I've said this before and I'll say it again, put money aside, call up the best schools in the country, and get the games done. But here's the problem with that line of thinking. The likes of Ohio State, Oklahoma, Texas, Alabama, Auburn, Florida and every BCS team that isn't in the Pac-10 won't schedule Boise State.

Why? Because they'd rather pay San Jose State, the worst the WAC has to offer, a hefty sum of money for an easy win than pay any amount to bring Boise State in for a real challenge.

On the other side of that, Nebraska did attempt to schedule Boise State starting in 2015, but the deal apparently died off when Boise State allegedly wanted more than a $1 million payday to go to Lincoln. Shake yourself, Boise, you're not going to get that kind of payday from anyone.

If you want respect, if you really want to shut fans up, negotiate a price that's reasonable and get the game done.

The longer Boise State dances around the bigger BCS conference schools, and the more those schools dance around Boise State, the more this argument is going to continue and the more we'll continue to go round and round about it, ending up at the same point.

Hate Boise State if you want, hate the blue turf that they play on, but respect the team and the head coach, Chris Petersen, who continues to say all the right things and goes about his business the right way.

Because when they raise the Coaches' Trophy and the rest of football watches them celebrate, I'll be able to sit back and smile. The team that was told they didn't belong just proved the opposite on the biggest stage in college football.

But, unfortunately, the BCS computers won't let that happen. And until that changes, Boise State may be on the outside looking in for a long time to come. 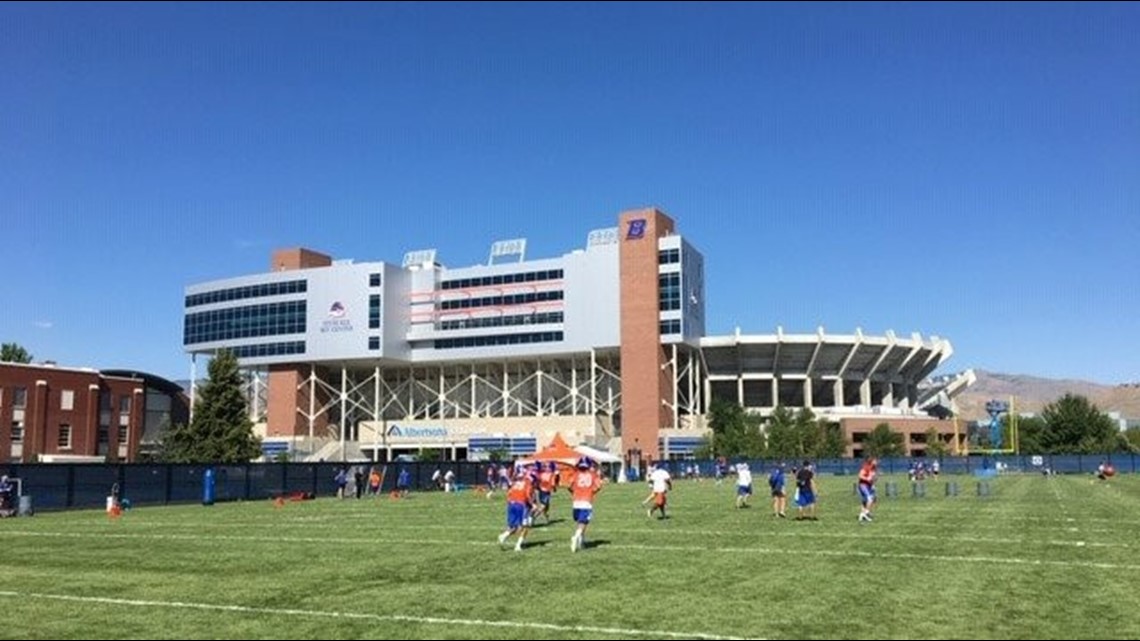