On the strength of 21 points and seven boards from DaJuan Summers, Georgetown knocked off then No. 15 Memphis 79-70 in the Verizon Center to run their record to 7-1. Sixteen days later, after the Hoyas went into Hartford and knocked off then No. 2 UConn, Georgetown was sitting pretty. They were 10-1 and ranked 8th in the country with wins over UConn (a No. 1 seed in the tournament), Memphis (a No. 2 seed), and Maryland (a No. 10 seed). 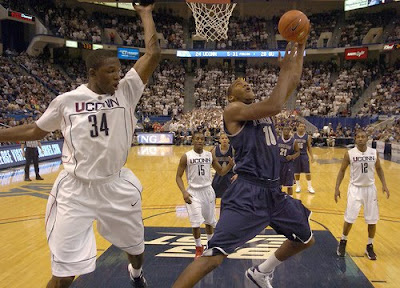 Georgetown moved into the Top 10 after opening the Big East season with an emphatic win in Hartford last season.
(photo credit: Obsessed with Sports)

It was difficult to find someone that wasn't smitten with the Hoyas as many considered them a real threat to unseat Louisville, UConn, and Pitt atop the Big East.

Fast forward three months, and a loss to St. John's in the Big East tournament seals Georgetown's fate as an NIT team.

Finishing a season losing 13-of-19 games will do that to you.

Why am I bringing this up now?

After winning two games against ranked teams this week, Georgetown is once again on the precipice of the Top 10. And once again, shop owners on M Street can hear the rumblings of a Hoya fan base expecting a run at another Big East title.

Its not unwarranted, as Georgetown is sitting pretty as one of just 12 teams (four in the Big East) still undefeated. But keep in mind, this Georgetown team is not much different than last year's group.

And wins over Butler and Washington are not quite the same as Syracuse beating UNC and Florida. Or Kentucky rolling through the Heels and the Huskies. Hell, one could even argue that Kansas State's wins over Dayton, Xavier, Washington State, and UNLV are more impressive.

Simply put, neither the Butler Bulldogs nor the Washington Huskies are playing anywhere near the potential that made them borderline Top 10 teams in the preseason. Butler has yet to get anything out of Matt Howard, who can't seem to stay out of foul trouble, and does not appear to have the size, length or athleticism up front to compete with the best teams in the country. Their win over Ohio State came with out Evan Turner in the line-up.

Washington simply isn't playing defense right now. No matter how well Isaiah Thomas and Quincy Pondexter are playing (which is debatable at times), the Huskies are not going to be a great team until they start getting stops and scoring in transition.

My point isn't to say the Hoyas did not impress me in these two wins.

They flew to New York and took down Butler in Madison Square Garden on Tuesday before flying out to Anaheim to beat Washington on Saturday. That is a lot of miles to travel in one week.

It was more than just the wins that caught my attention, however.

It was how they won.

On Tuesday, Greg Monroe dominated Butler inside, and while he was less efficient than the ideal (24 points and 15 boards on 9-20 from the floor and 6-10 from the line), it is a good sign that Monroe is capable of over powering a smaller team inside. 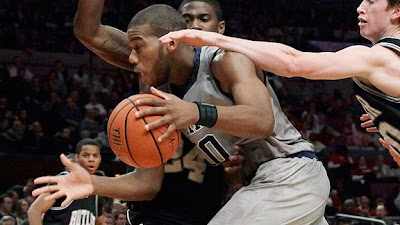 Then on Saturday, Monroe was playing a bigger, more athletic Washington team that has a tendency to gamble on defense, and Monroe was able to play facilitator in the Hoyas offense, finishing with 15 points, eight boards, and six assists.

Against Butler, Austin Freeman finally snapped out of his offensive funk, hitting 4-5 from three and scoring 18 points. Against Washington, Julian Vaughn scored a career-high 18 points while grabbing seven boards, proving that the Hoyas finally have some help in the paint for Monroe.

In fact, it now seems like the Hoyas have five guys on their team that are legitimate scoring threats.

Combine that with the stifling defense that the Hoyas played in both games, and it wouldn't be a stretch to think that Georgetown could be in the hunt for a Big East title come February.

But isn't that what we all thought on Dec. 30 last season?

As the Hoyas still have a major, and possibly fatal, flaw—their lack of depth—I caution any Georgetown fan currently contemplating purchasing Final Four tickets to wait.

On January 18, the Hoyas will be a third of the way through their Big East schedule, having hosted St. John's, UConn, and Seton Hall (who is also undefeated) as well as having traveled to DePaul, Marquette, and Villanova. Also thrown in that mix are home dates against solid mid-majors in Harvard and Old Dominion.

While that isn't quite the same as the gauntlet that was last season's Big East, it is a tough eight game stretch nonetheless. Go 7-1 or 8-0, and yes, I will be convinced that this is a team that can fight for a Big East title.

But go 4-4 or 3-5, which is a conceivable possibility, and this may be a team that has to fight to get into the NCAA Tournament.

And while I think that the former is a much more likely outcome than the latter, I caution Georgetown fans to take a wait-and-see approach before assuming that the Hoyas will be a title contender.