Miami Heat All-Star Jimmy Butler appeared on Wednesday's episode of The JJ Redick Podcast to discuss his time as a member of the Philadelphia 76ers with former Sixers teammate JJ Redick.

Butler specifically mentioned a lack of leadership plaguing his tenure in Philadelphia:

Butler was traded from the Minnesota Timberwolves to the Sixers last season, and he went on to appear in 55 regular-season games and 12 playoff games for Philly before getting sent to Miami during the offseason as part of a sign-and-trade deal.

Butler and Redick also talked about an incident that occurred during a film session in Portland between Butler and Sixers head coach Brett Brown. At the time, ESPN's Adrian Wojnarowski and Ramona Shelburne reported that some witnesses considered it "disrespectful" and "beyond normal player-coach discourse."

Butler explained that he simply decided to speak up after a previous instance in which the team sat through a film session in silence: 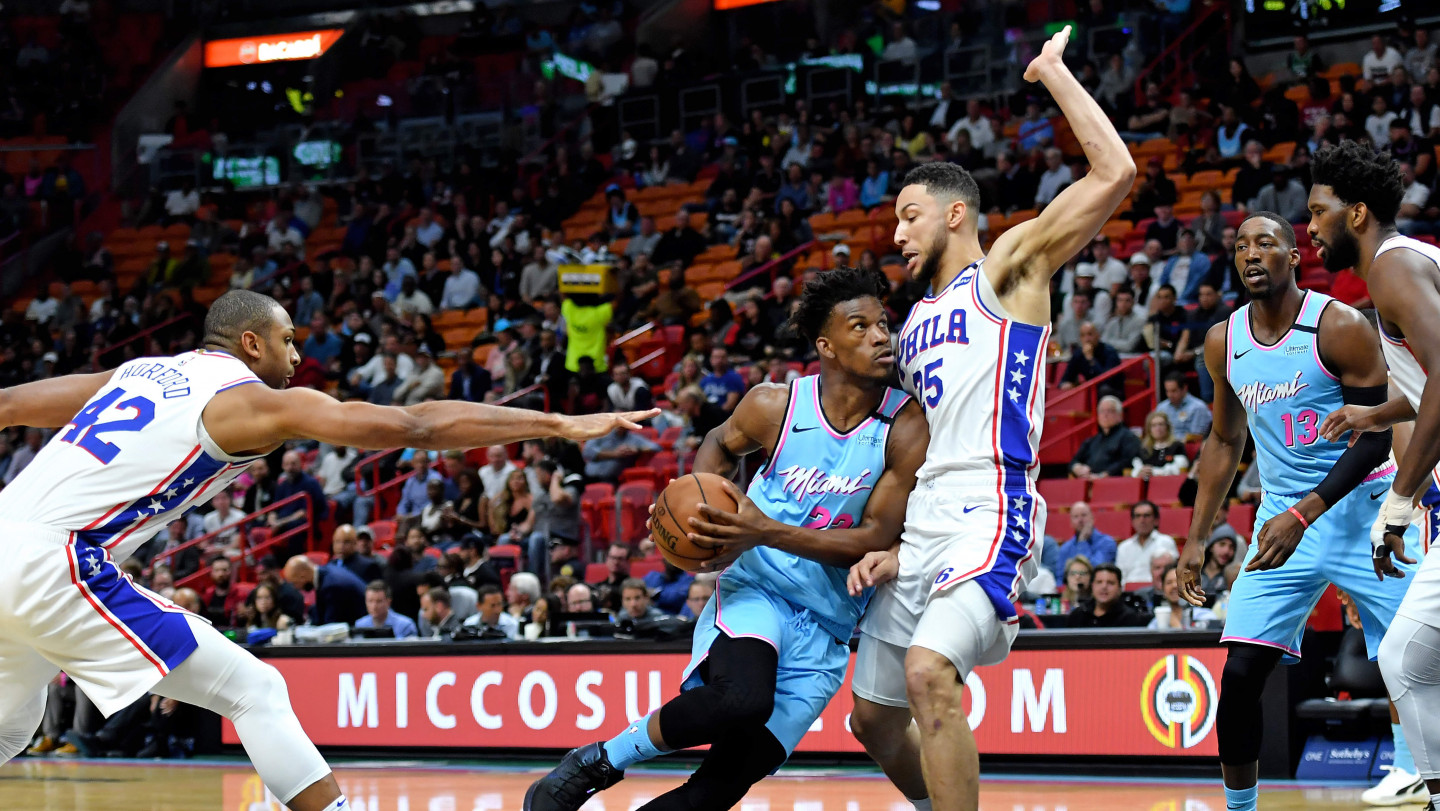 "We're all sitting in there, and nothing got accomplished, at all. So I was like, and I told you this as we walked out: 'JJ, why would I ever go back in there again? Nothing's getting accomplished. Nobody's saying nothing to anybody and we're just sitting in here watching film, and you can literally hear the thing just clicking, and we're all just looking around.'

"So I come to you, I said: 'JJ, why would I go back in there again? We didn't do nothing. Nothing got accomplished.' So, now we fast forward to how many other weeks is over there and we're in Portland, and that happens during a film session because, once again, wasn't nobody saying nothing. So who was the individual who finally decided to finally say something?"

While the report regarding that incident may have added to the notion that Butler was difficult to work with, Wojnarowski and Shelburne did note that Brown told people within the Sixers organization that he had "no issues" with the exchange and felt it was "within the confines of the relationship that he has developed with Butler."

Redick brought up an aspect of the incident that involved guard T.J. McConnell. Redick joked that Butler "threw him under the bus" by saying, "T.J. wants more pick-and-rolls" when Brown asked what offensive changes the players wanted to make.

Butler denied calling McConnell out by name but said he had spoken to five people who expressed a desire for Brown to make some offensive changes. When nobody spoke up during the meeting, Butler said he locked eyes with McConnell.

While Butler recalled McConnell waffled a bit when put on the spot, he wanted McConnell and everyone else to know one simple fact: "It's OK to speak your mind."

The lasting memory some may have of Butler's tenure in Philadelphia was the decision to have him handle the bulk of the ball-handling duties during the playoffs after point guard Ben Simmons did so for essentially the entire regular season.

Butler admitted to asking Brown to handle the ball more often, but he said he felt it was a mistake to make such a drastic switch:

"Cool, but I would be pissed. I'm not going to complain about it, but I don't think that was the best way of doing it, in my opinion."

There were high hopes for Butler and the Sixers during the postseason, but they were eliminated in the Eastern Conference semifinals by the eventual NBA champion Toronto Raptors in seven games.

That marked the end of that particular iteration of the Sixers, as Redick signed with the New Orleans Pelicans during the offseason and Butler went to Miami.

There has been plenty of speculation with regard to why Butler decided to leave a contender for a Miami team that won just 39 games last season, but he offered some clarity on Wednesday's podcast:

"Somebody told me a main reason that I didn't go back was because somebody asked: 'Can you control him?' Like: 'Can you control Jimmy? If you can control Jimmy, we would think about having him back.' I was like: 'You don't gotta worry about it. S--t, can't nobody f--king control me.' For one, I ain't just out there doing no bulls--t, but the fact that you're trying to control a grown man? Naw, I'm cool. Because I don't do nothing that's just drastically f--king stupidly crazy. I do not do that. So don't sit here and come at me with the: 'Oh, we gotta try to control him.' Nah, you good. Don't even worry about it. ... You ain't gotta worry about me coming. If that's what y'all worried about, if that's what y'all worried about, I think man, good luck to y'all."

The decision to leave for Miami has paid dividends for both Butler and the Heat, as Miami is fourth in the Eastern Conference at 41-23 and has already surpassed last season's win total. The Heat are also three games up on the sixth-place Sixers.

With Butler in the fold, the Heat have seen big man Bam Adebayo develop into an All-Star and other young players such as Kendrick Nunn, Tyler Herro and Duncan Robinson become key contributors on a winning team.

The Sixers are still a dangerous team with the likes of Simmons, Joel Embiid and Tobias Harris leading the way, but Butler and Heat may be a far bigger threat to take down the top-seeded Milwaukee Bucks in the playoffs.