According to Ian Begley of SNY.tv, two first-round picks is the "baseline" of where negotiations would start if and when the Raptors seriously discussed the possibility of sending Ujiri to the Big Apple.

Ujiri is under contract through the 2020-21 season with the defending champions.

This comes after Begley reported Dec. 7 there are some "people in positions of influence" with Madison Square Garden who are "obsessed" and "enamored" with Ujiri. Begley also reported Wednesday that there are a number of members within the Knicks organization who "fully expect president Steve Mills will be replaced."

Replacing him with someone with Ujiri's resume would be an impressive move for a struggling Knicks franchise that hasn't been to the playoffs since the 2012-13 campaign.

Ujiri was with the Denver Nuggets from August 2010 through May 2013 and won the Executive of the Year in his final season with the team. He was notably part of the front office that traded Carmelo Anthony from the Nuggets to the Knicks.

He has been with Toronto since he left Denver, and the Raptors have made the playoffs every season under his guidance. His biggest move came when he traded DeMar DeRozan as part of a package that brought back Kawhi Leonard and Danny Green. 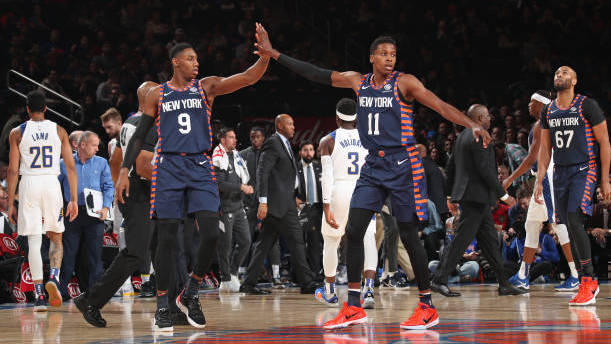 It was a massive risk since DeRozan was a fan favorite and longtime Raptor and there was no guarantee Leonard would return after the one season remaining on his contract expired. While he didn't return, he led the Raptors to their first championship in franchise history.

The Knicks are in full-on rebuilding mode. Ujiri would give them someone who knows how to build a winner, but first-round picks are key in the rebuilding process. It would be a hefty price to pay for one of the league's best executives.