The juggernaut that is the Los Angeles Clippers is rounding into form.

Los Angeles improved to 16-6 on the season and 9-1 in its last 10 games with a 117-97 victory over the Portland Trail Blazers on Tuesday at Staples Center. Paul George and Montrezl Harrell led the way in the latest effort, helping their team defeat its Western Conference foe for the second time already.

As for the Trail Blazers, they are just 8-13 after their three-game winning streak came to an end.

Los Angeles had the chance to light up the scoreboard seeing as how it is fifth in the league in offensive rating compared to Portland at No. 21 in defensive rating, per NBA.com, and it did just that.

Any offense with Kawhi Leonard and George is going to have a sky-high ceiling, but it was about more than just the primary two playmakers in Tuesday's contest.

Harrell was particularly aggressive in the post, attacking Portland's weak interior defense and consistently finishing at the rim. The Trail Blazers had no answers for him flashing into openings and even scoring off the bounce, especially with the attention Leonard, George and Lou Williams require every time they have the ball. 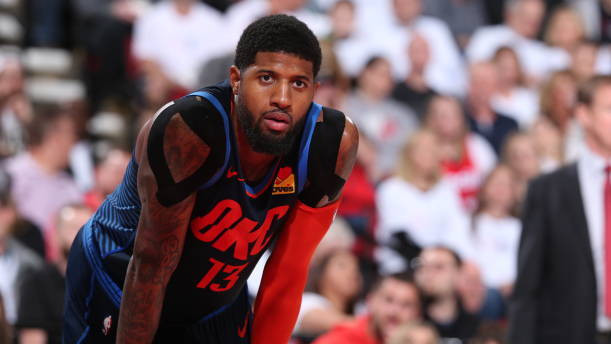 Montrezl Harrell gets *another* late bucket at the end of a quarter tonight. Despite a 3-10 night from the free-throw line, he's up to 21 points.

Elsewhere, Patrick Patterson spotted up in the corner a number of times waiting for the extra pass, and Patrick Beverley took advantage of his open looks from the outside.

The scariest part for the rest of the Western Conference is the reality that Leonard and Williams shot a combined 7-of-29 from the field, and the Clippers still won with relative ease. Leonard is arguably the best player in the league, while Williams spearheads the second unit, but neither one needed to play at his best to come away with a win over a potential playoff opponent.

The TNT broadcast emphasized the fact that George and Leonard still haven't practiced together with the former returning from shoulder surgery and the latter bouncing back from a knee injury. That hasn't stopped the Clippers from playing as well as anyone in the league of late, and the role players deserve plenty of credit.

When the stars are practicing together and all the pieces start to jell and fully find a rhythm, it will be championship-or-bust in Los Angeles.

Regardless of Tuesday's performance, Carmelo Anthony's success has been one of the biggest storylines of the early season.

Portland signed him on Nov. 19, and it was fair for fans to assume he'd be a role player at best who was asked to provide a scoring burst off the bench considering he hadn't played since November 2018. He has instead been a revelation who scored 25 points against the Chicago Bulls, 19 points against the Oklahoma City Thunder and 23 points in a Bulls rematch in his prior three games.

Carmelo Anthony has just been named the NBA's Western Conference Player of the Week. No matter what happens from here, that's flat-out remarkable and says a tremendous amount about not just what he's still got, basketball-wise, but his mental discipline as well.

Anthony thrived in the space created by playing alongside Damian Lillard and CJ McCollum in all three of those victories and is the reigning Western Conference Player of the Week because of it.

It was a different story against Los Angeles' defense Tuesday.

The Clippers made a point of taking away his three-pointer and contested his looks whenever he slowly backed down a defender. Despite two quick baskets in the second quarter, he shot just 2-of-9 from the field and picked up a frustrating offensive foul in the fourth when the Trail Blazers were attempting to come back.

Anthony has still been an incredible story, but his game fell off in the face of elevated competition in Los Angeles.

The Trail Blazers host the Sacramento Kings on Wednesday, while the Clippers are at the Milwaukee Bucks on Friday.