Bentley, a senior, appeared in just one game this season, throwing for 142 yards, a touchdown and two interceptions in a 24-20 loss against North Carolina on Aug. 31. A season-ending foot injury cut his year short after that game, however.

Despite the injury, Bentley still had an impact on the Gamecocks this season, as head coach Will Muschamp said in October, per Jordan James of 247Sports.com:

"He's being a great teammate. He's helping these young quarterbacks. He's not been able to travel with us, as far as when we fly and drive long distances. Our training staff has not wanted him to do that. He's been at all of our home games and all of our practices and all of our meetings. In the training room constantly supporting our guys. He's been exactly who you think he’d be."

For his career, Bentley has thrown for 7,527 yards, 55 touchdowns and 32 interceptions, completing 62.5 percent of his passes. Due to only playing one game this season, however, he'll have another year of eligibility and can switch programs without having to sit a year as a graduate transfer.

Jake Bentley leaves South Carolina 2nd in school history in comp % (62.5), 4th in passing yards (7,527), 3rd in passing TDs (55), 3rd in completions (626). Could have set most of school's career passing marks had he stayed healthy (or returned and won back starting job).

Jake Bentley thanks fans who supported him 'through thick and thin' during his career with a footnote in his goodbye letter. Never has a #Gamecocks QB received as much flack on social — just or unjust — during his career. He's THE defining player of the Will Muschamp era.

That will give Bentley the opportunity to seek out a contending team in need of an experienced upgrade at quarterback. In his four years at South Carolina, the Gamecocks have gone just 26-25. While the team went 9-4 in 2017 and won the Outback Bowl over Michigan, they've gone just 4-8 this season.

That means that a pair of freshmen this past season—Ryan Hilinski (2,357 yards, 11 touchdowns and five interceptions) and Dakereon Joyner (168 passing yards, 107 rushing yards and a touchdown, six receptions for 46 yards)—will battle for the starting gig next season.

Hilinski mostly handled the starting duties this year, with injuries limiting Joyner. But the athletic and versatile Joyner should have the chance to earn a larger role, or even the starting job, this spring.

Feel for #Gamecocks Dakereon Joyner. Decided to stick around as QB3, assumed he'd get action as QB2 following Jake Bentley's injury in the opener, but instead was relegated to minimal action in 6 games. Blown season. Wasn't healthy at times, but truly underutilized athletically.

Incoming 4-star quarterback Luke Doty is another player to throw into the mix at the position next season. South Carolina will have options in the post-Bentley era. 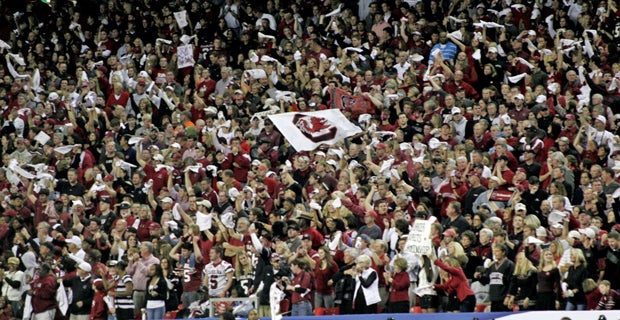 POLL: Which SEC team would you add to 2020 schedule?

POLL: Which SEC team would you add to 2020 schedule?