Heading into the final week of the regular season, the 2019 Heisman Trophy is Joe Burrow's to lose.

The senior quarterback has taken full advantage of a revamped LSU offense and turned in a spectacular year. Through 11 games, Burrow boasts a 78.9 completion percentage with 4,014 yards at a scorching 10.9 yards per attempt. He's thrown 41 touchdowns to only six interceptions while leading second-ranked Tigers to an 11-0 record.

All season, Burrow has been the reason for LSU's success. He's cracked the 300-yard mark in nine games, and the only exceptions are a 278-yard, five-touchdown day against Georgia Southern and a 293-yard, three-score day opposite Florida.

Burrow is such a favorite that Caesars has pulled Heisman odds from the board, instead simply listing a prop of whether he'll win. And in all likelihood, Burrow will host the prestigious award at the official event in New York on December 14.

Should that happen, Burrow will join quarterback Billy Cannon (1959) as the only Heisman winners in program history. 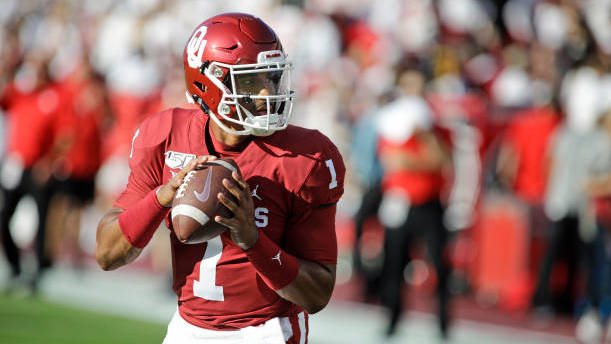 But a player who chases quarterbacks on the field is also making a serious charge at Burrow for the trophy. Ohio State coach Ryan Day agrees.

Ryan Day says Chase Young “deserves to be in New York” as a finalist for the Heisman.

Chase Young slipped in the Heisman discussion when the NCAA levied a two-game suspension on the superstar edge-rusher. The brief absence followed a sensational day against Wisconsin when the junior collected five tackles for loss and four sacks.

Upon his return, though, Young wrecked then-No. 8 Penn State for a career-high nine tackles with four takedowns for loss and three sacks. That improved his season totals to 19.5 tackles in the backfield and an FBS-leading 16.5 sacks.

And back into the conversation he flew.

Granted, his absence combined with Burrow's excellence may be too much for Young to overcome. LSU's quarterback hasn't played a bad game all season, and that remarkable level of consistency will be rewarded with various individual awards.

But if Burrow leaves the slightest window open, Young is perfectly positioned with two national showcases.

While LSU hosts Texas A&M before playing a stout Georgia defense in the SEC Championship Game, Ohio State travels to 13th-ranked Michigan during rivalry week. Then, the Buckeyes will play either Minnesota or Wisconsin for the Big Ten title.

No matter what, it's fair to expect both Burrow and Young in New York alongside a few others.

Oklahoma quarterback Jalen Hurts has totaled 4,340 offensive yards and 47 touchdowns, while Ohio State signal-caller Justin Fields has 43 passing and rushing scores to just one interception. Oklahoma State running back Chuba Hubbard has racked up 2,002 yards from scrimmage and 20 touchdowns too.

Barring a shocking sequence of events, they're no longer serious contenders to win the Heisman. They should, however, finish in the Top 10 of voting with Wisconsin's Jonathan Taylor, Alabama's Tua Tagovailoa and Clemson's Trevor Lawrence.