Perhaps what the Los Angeles Dodgers need after seven straight years of disappointing postseasons is some kind of game-changing spark.

For instance, a trade for the best shortstop in Major League Baseball.

The Dodgers, who bowed out of the first round of the 2019 playoffs after losing in the World Series in 2017 and 2018, could do exactly that if they strike a deal with the Cleveland Indians for Francisco Lindor. And according to Jon Paul Morosi of MLB.com, they are interested in the four-time All-Star:

#Dodgers expected to pursue Francisco Lindor via trade this winter. My story on one of many offseason possibilities the Dodgers (and #Indians) are considering. Story: https://t.co/9WRvCrP0o5 @MLBNetwork @MLB

Lindor shouldn't need an introduction at this point. He started playing like a superstar immediately upon arriving in the majors in 2015, and he's hardly slowed down in four seasons since then.

According to Baseball Reference, Lindor has been worth 28.6 wins above replacement in his five major league seasons. That's first among shortstops and fifth among all position players after only Mike Trout, Mookie Betts, Nolan Arenado and Jose Altuve, who have four MVP awards between them.

On top of all this, Lindor will turn just 26 on Nov. 14, and he's projected by MLB Trade Rumors to earn a reasonable $16.7 million salary in 2020. He'll have still another year of arbitration eligibility in 2021 before he reaches free agency.

These are important distinctions, especially in relation to Betts, who's also on the trading block. The Boston Red Sox's 27-year-old right fielder is a better player than Lindor, but he's projected to earn $27.7 million in his final season of club control. Such things complicate his trade value.

Put another way, Lindor is the shiniest trade chip the Dodgers can possibly pursue this winter. But if they really want him, they better be ready to pay up.

The Indians don't have to pawn Lindor off for less than he's worth. As ESPN's Buster Olney covered, they can just as easily move him ahead of the 2020 trade deadline, next winter or ahead of the 2021 deadline.

There's also, of course, the reality that the Indians aren't in a rebuilding phase. Even in falling short of a fourth straight American League Central title in 2019, they still won 93 games. If they do trade Lindor now, it will only be because they sniffed a golden opportunity to shed payroll and recoup young talent they could plug in right away.

For the Indians, one ideal Lindor deal might function like the Trevor Bauer trade and bring back a young, cost-controlled major leaguer (Franmil Reyes) and a name-brand prospect (Logan Allen).

Another possibility would be something more akin to the Miami Marlins' trade of Christian Yelich, who was more controllable than Lindor is now but not yet an MVP-caliber performer, to the Milwaukee Brewers in January 2018. That one brought back a four-player package headlined by one elite prospect (Lewis Brinson) and two lesser top-100 prospects (Monte Harrison and Isan Diaz).

For the Dodgers, asks like these aren't too outlandish.

The Dodgers and Indians might base a trade around 23-year-old outfielder Alex Verdugo, who could slot into right field in Cleveland and stay there through 2024. Tony Gonsolin, a 25-year-old right-hander who teased some potential with a 2.93 ERA in the majors this season, could be a secondary piece.

If the Indians would rather pluck from the Dodgers' seventh-ranked farm system, they could go hard after shortstop Gavin Lux or righty Dustin May. Even if the Dodgers were to balk at basing a deal around either of them, a multi-player package fronted by Keibert Ruiz might be good enough for Cleveland.

The 21-year-old catcher is MLB.com's No. 33 prospect, and he's just about MLB-ready. The Dodgers could then throw in No. 75-ranked righty Josiah Gray and No. 87-ranked shortstop Jeter Downs.

Granted, either of these scenarios would cause nervous jitters in a Dodgers front office that's generally been risk-averse since Andrew Friedman took control in 2014. But the potential reward would be more than enough to justify going through with a trade for Lindor.

Hypothetically, the Dodgers could put him at shortstop, move Corey Seager to third base and slide Justin Turner across the diamond to first base. Newly minted Gold Glover Cody Bellinger could take up permanent residence in right field. Those moves would likely be a net positive defensively.

Meanwhile, the Dodgers could upgrade the top of their lineup by sticking Lindor in either the leadoff or No. 2 slot, which were somewhat weak relative to their Nos. 3, 4 and 5 slots in 2019.

A Lindor trade can therefore only make the Dodgers better on both sides of the ball. That's a frightening thought for the competition, as they were already the National League's best offensive and defensive team in 2019.

If the Dodgers can get this done, they'd only have to patch up holes in their pitching staff. Re-signing Hyun-Jin Ryu and adding a reliever or two would do the trick.

Whatever the case, there's no good reason Lindor shouldn't be front and center in the Dodgers' offseason plans. It's as simple as them needing him and his price being one they can afford. 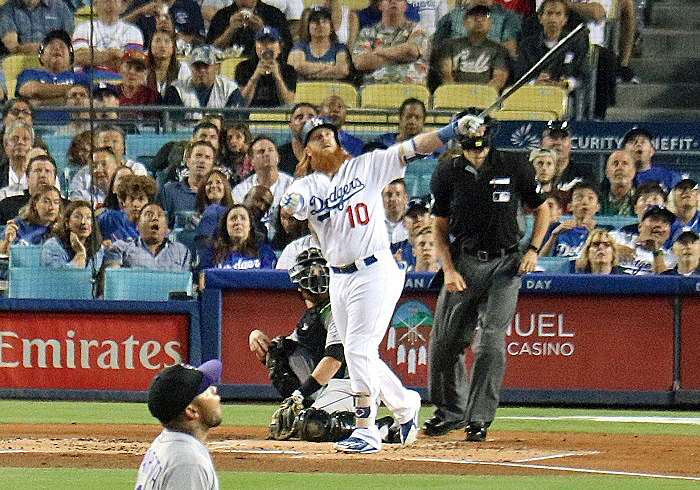