As Karl-Anthony Towns prepares to return to the court following his two-game suspension, the Minnesota Timberwolves star explained what led to his altercation with Joel Embiid.

Per The Athletic's Jon Krawczynski, Towns made it clear he was doing what was necessary to defend himself against the Philadelphia 76ers center.

"I ain't going to take nothing," he said. "That's a very ... talented player. I just had to defend myself in that situation."

Towns and Embiid were ejected in the third quarter of Philadelphia's 117-95 win over Minnesota on Oct. 30 for getting into an altercation on the court. Ben Simmons also became involved when he held Towns on the ground as coaches and players for both teams attempted to settle the situation down.

"There was not a lot of talking. It kind of happened out of nowhere," Embiid told reporters after the game. "I just did what I had to do. ... It happens."

Towns downplayed the brawl when talking to reporters following the loss, saying it was a "competitive game."

The NBA issued both Towns and Embiid two-game suspensions without pay for the incident. 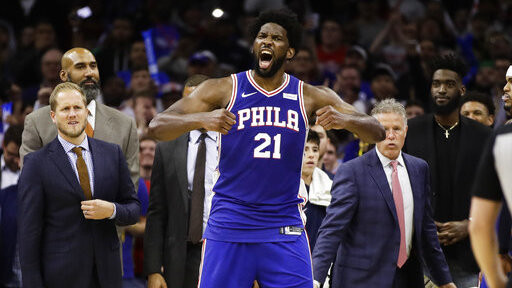 Getting Towns back in the lineup will be a boost for the Timberwolves, who are off to a strong 4-2 start this season.

Towns looks like a potential MVP candidate through his first four games. The two-time All-Star is averaging 27.3 points, 11.5 rebounds and 4.0 assists per game and is shooting 52.9 percent from three-point range.