The 4-star dual-threat quarterback announced on Twitter Sunday that he committed to Alabama after previously committing to USC in July 2018:

Young also posted a note thanking USC head coach Clay Helton and saying, "I will always have love for the University of Southern California":

It's a disappointment for USC, considering Young is a Santa Ana, California, native out of Mater Dei High School.

After Bryce Young’s flip to Alabama, USC’s highest rated recruit for the upcoming class on 247Sports is No. 291.

According to 247Sports, Young is the nation's top dual-threat prospect and compares best to Seattle Seahawks quarterback Russell Wilson. Greg Biggins expanded on that while scouting the 5'11", 183-pound QB in November:

"Plays with a poise and savvy beyond his years. Never looks flustered or nervous in the pocket. Has improved his touch and accuracy on the deep ball, but it’s an area we think he can continue to get better. Has an advanced feel in the pocket and is excellent going through progressions and finding his secondary targets. Has an extremely high football IQ and will have no problem picking up a complex college playbook. Is a natural leader, a winner and the guy you want leading your team on a last-minute drive."

Young's poise could be especially beneficial for Alabama, as junior quarterback and reigning Heisman finalist Tua Tagovailoa could bolt for the NFL following this season.

Young has played four games as a senior for Mater Dei and has already thrown for 14 touchdowns opposite one interception to go with five rushing touchdowns, according to MaxPreps. His total high school statistics include 9,994 yards, 108 touchdowns and 16 interceptions as a passer as well as 870 yards and 21 touchdowns as a runner. 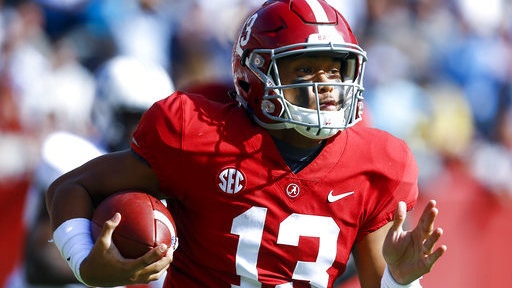 Stick to Football is live from Madison, Wisconsin! We discussed Antonio Brown, USC and also had on B/R's very own Adam Kramer to discuss his Jonathan Taylor feature.

Alabama AD Greg Byrne: 'Our goal is to play this fall'

Alabama AD Greg Byrne: 'Our goal is to play this fall'