A timetable for USC Trojans receiver Bru McCoy's return to the football field remains unclear, as he has dealt with a "fever of unknown origin" the past seven weeks.

"They cannot figure it out," Horace McCoy, Bru's father, told Ryan Kartje of the Los Angeles Times on Thursday of the doctors his son has seen. "I cannot tell you how many specialists we've got him in front of, just to try to figure this damn thing out."

Per Kartje, the teenager has been treated for a variety of illnesses, including flu, strep throat and legionella. However, he continues to have a mysterious fever.

Coming out of high school, McCoy was rated by 247Sports as a 5-star recruit and the No. 9 overall prospect in the class of 2019. He initially committed to USC at the All-American Bowl in January but opted to transfer to Texas just weeks later after then-Trojans offensive coordinator Kliff Kingsbury left for the NFL to become the head coach of the Arizona Cardinals.

McCoy transferred back to USC in June, which Chip Brown of Horns247 reported was the result of the Southern California native feeling homesick.

OFFICIAL: Freshman Bru McCoy is back at USC. #FightOn https://t.co/YgS6Pfkw4M

The 6'3", 210-pound wideout is currently awaiting the NCAA's decision on his eligibility waiver. If it is denied, he will have to sit out the 2019 season. But that is secondary at this point, as the Trojans will not allow the freshman to take the field until his fever is gone.

Horace McCoy acknowledged that the situation has not been easy on his son.

"All this kid wants to do is play football," Horace told Kartje. "He wants to work out with his buddies and get on the field and do what he does best. You get tried in times like this. He's as positive as he can, but he's frustrated."

USC coach Clay Helton revealed on Thursday, per Kartje, that Bru has been able to attend team meetings in the meantime and is "actually getting a little better." 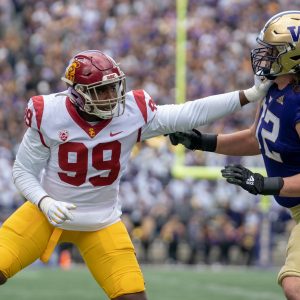