According to CNN's Jill Martin, Jordan issued a statement that read, "I want to congratulate LeBron on achieving another great milestone during his amazing career."

James pulled even with MJ at 32,292 points during Wednesday's 115-99 loss to the Denver Nuggets before surpassing him with a second-quarter layup, which led to a celebration inside Staples Center: 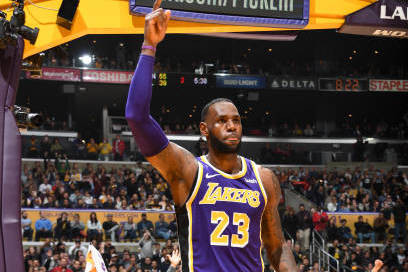 LeBron finished the game with 31 points, and he now sits fourth on the all-time scoring list with 32,311 career points, which puts him roughly 1,300 points off Kobe Bryant in third.

While passing his idol on the scoring list was a feel-good moment, it wasn't long before James and the Lakers were brought back to reality, as they lost their fourth consecutive game and sixth out of the past seven.

The loss dropped the Lakers to 30-35 on the season, and they are now 6.5 games out of a playoff spot in the Western Conference, which will be a tough hill to climb with just 17 matchups remaining.

The biggest separator when it comes to LeBron and Jordan, though, is championships. James has won three titles across nine career NBA Finals appearances, while Jordan won a title each of the six times he reached the Finals.

Until LeBron comes closer to matching Jordan's total of six championships, MJ supporters will always have a rebuttal to those who believe James is the superior player.

If the Lakers manage to land another superstar during the offseason, such as New Orleans Pelicans big man Anthony Davis, then James and the Lakers will be back in the conversation. Failing that, it is clear L.A. doesn't yet have a roster capable of making a deep playoff run, let alone making the postseason.

While several question marks surround the Lakers and their prospects for success in the immediate future, there is no denying James' status as one of the all-time greats. He's now about 6,000 points away from surpassing Kareem Abdul-Jabbar as the NBA's most prolific scorer ever.