CLEVELAND — Channing Frye makes it a point to check up on a lot of the teammates he's had over his 13-year career.

From Nikola Vucevic, Evan Fournier and Aaron Gordon in Orlando to Kyle O'Quinn in Indiana to his cousin Tobias Harris now in Philadelphia, Frye goes out of his way to see how his former teammates and their teams are navigating throughout the season.

For one ex-teammate, he doesn't have to look far. LeBron James, who helped Frye win his lone championship ring in 2016 with the Cleveland Cavaliers, is now in danger of missing the playoffs for the first time in 14 years. His Los Angeles Lakers are 30-34, 5.5 games back of the San Antonio Spurs for eighth place in the Western Conference.

Despite what seem like insurmountable odds, Frye and those who have played with and coached James refuse to count him out.

"I don't care if there was one game left and LeBron had to win two," Frye told Bleacher Report. "I'd still wait until the last second to doubt him."

As it stands, the Lakers have 18 games remaining to try to leapfrog both the Spurs and ninth-seeded Sacramento Kings to sneak into the postseason. Making up fewer than six games in this time isn't impossible if Los Angeles was playing well, but the Lakers have continued to struggle even since James returned from his groin injury Jan. 31. 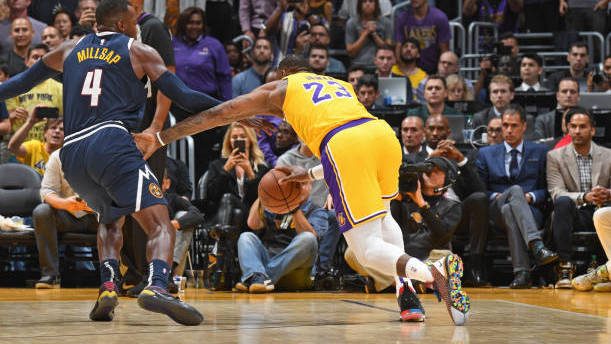 Injuries have plagued Los Angeles outside of James as well. Starting point guard Lonzo Ball has been out since Jan. 19 with a sprained ankle and has no guarantee he'll return this season. Second-leading scorer Kyle Kuzma is now out up to a week with an ankle injury of his own, and Brandon Ingram is questionable to play Wednesday against the Denver Nuggets with soreness in his right shoulder. Key contributors Rajon Rondo, Tyson Chandler and JaVale McGee have all missed time too.

As if that weren't enough, the Lakers will finish the season with the eighth-toughest remaining schedule, per Tankathon, and still must face the Nuggets, Golden State Warriors, Milwaukee Bucks, Toronto Raptors, Oklahoma City Thunder and Portland Trail Blazers.

So, why the faith that James can still throw a group of banged-up, inexperienced youngsters on his back and reach a 14th straight postseason?

"Listen, no one gave us an effing inkling when we were down 3-1 or when we were fourth in the East," Frye said, referring to the 2016 NBA Finals and the Cavs' regular-season finish a year ago. "Then something happens when it's crunch time, and [LeBron] just steps to another level. I'm not doubting him or that team."

Frye has seen firsthand what doubting James can bring, after all.

Most left the Cavs for dead after Kyrie Irving was injured during Game 1 of the 2015 NBA Finals. Already missing Kevin Love, James still pushed the Warriors to six games.

Finishing fourth in the regular season last year meant little to James, who didn't let the trade of Irving or an injury to Love in the Eastern Conference Finals stop him from carrying Cleveland into the Finals for a fourth straight year.

Of course, his greatest accomplishment will forever be in 2016, when making the Cavaliers the first team in 33 tries to come back from a 3-1 deficit in the Finals to win.

"We've seen in the past anything can happen," Love told B/R about James' Lakers still making the postseason, a likely nod to the then-unprecedented Finals comeback.

When the Cavs were down 3-1, ESPN BPI projections only gave them a 3 percent chance to win the series. Those odds for James and the Lakers to even make the postseason now are worse, however.

According to Basketball Reference, Los Angeles has just a 0.1 percent chance to reach the playoffs. For comparison, those are the same odds they give to teams like the Charlotte Hornets, Brooklyn Nets and Detroit Pistons to win the Finals. Not exactly a ringing endorsement.

Still, if anyone can pull it off, why not James? Another of his former Cavs teammates, Richard Jefferson, would still take the 34-year-old over any player in the league.

"Do I still think that LeBron James is the best player in the world? Yes. Is the guy injured? Yes. Has the guy played a lot of basketball? Yes. Could it be Father Time? Yes, but I still believe that if you were to put him in a seven-game series with the same amount of talent as any other player, I still believe that he comes out victorious. That's just me because, honestly, I haven't seen anything different in the last 13 years," Jefferson said on the Bucher & Friends podcast.

While those who have played alongside him refuse to doubt James, the lack of supporting cast and a brutal Western Conference will have a lot to say over the final six weeks of the season.

Love pointed out the considerable amount of time it can take for a team to come together, a process delayed by James' 18 missed games. The 2014-15 Cavs started the season just 19-20. Thus far, the Lakers are a hair better (24-22 overall) in games where James has suited up.

Therein lies yet another problem for L.A: After failing to trade for Anthony Davis, Magic Johnson and Rob Pelinka didn't add any significant talent to the roster to give James a fair shot at another playoff run. A single All-Star isn't enough in today's NBA.

"It's tough to win [with just one All-Star]. You look around the league at the moves teams are trying to make by adding a second guy or even a third guy, a superstar, you almost need that to get over the hump," Cavs head coach Larry Drew told B/R.

"Looking at our situation here over the last few years, having Bron here and Kyrie here along with Kevin, that was a terrific combination," he continued. "That was the beauty of it. Even if you have a superstar player, you can't expect them to carry you every single night. If you can get one or two of those guys each night, you put yourself in a position to win. You now have to approach every game like a playoff game if you're in their position."

While James had Love and Irving to fall back on in Cleveland, the number of able bodies around him are quickly growing thin.

Most superstars wouldn't be given a chance to crawl out of this kind of playoff hole, especially ones in their mid-30s. Still, if those who've shared a court with him refuse to doubt his capability, maybe we shouldn't either.

As Jefferson put it: "We've all marveled at his ability to defy Father Time, very similar to a Tom Brady. When I look at this situation, I don't think we're seeing the end of LeBron James."