Stephen Curry suffered a mild right foot sprain against the New Orleans Pelicans on Tuesday, per a team report.

Earlier this year, Curry gave the Warriors a scare on Nov. 8 against the Milwaukee Bucks when he suffered an adductor strain in his left leg.

The Warriors struggled during Curry's absence, going 5-6 in 11 games. However, they have gone 41-16 since he returned on Dec. 1 and have since clinched the Western Conference's No. 1 seed.

Entering Tuesday, Curry has been tremendous through 68 games. The two-time NBA MVP leads Golden State with 27.6 points per game and is shooting 43.7 percent from three-point range.

While most teams would be devastated by Curry's injury, the Warriors have the luxury of turning to Kevin Durant, DeMarcus Cousins and Klay Thompson to keep their offense moving at a rapid pace as they head into the playoffs. 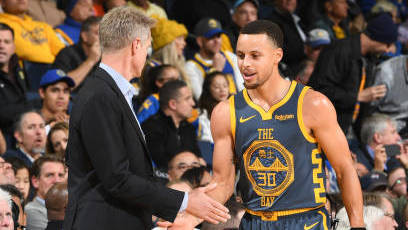