LAKELAND, Fla. — There we were, Miggy and me, in the tunnel off the dugout, when the Detroit Tigers big man paused to explain himself.

"I'm not trying to be a dick," Miguel Cabrera says.

He was talking about what happened a couple of hours earlier on this spring day, though there was no need for an explanation. I had approached him before batting practice to say hello, and he waved me off and said he couldn't talk right then. Now, with batting practice finished, he had something to get off his chest.

Cabrera hasn't always been the most chatty fellow, but I've almost always found him cooperative and, often, playful.

But these are different times. Cabrera turns 35 April 18. He is coming off the worst season of his career. His 6'4", 240-pound body has been battered, and his team has been ransacked.

Gone are the years when the Tigers were annual World Series contenders. Now Cabrera is an island unto himself in a rebuilding organization that lost 98 games last year, surrounded mostly by a dugout full of hopefuls and maybes. In 2017, the Tigers traded ace Justin Verlander, slugger J.D. Martinez and second baseman Ian Kinsler. This year they may deal shortstop Jose Iglesias, starter Michael Fulmer and whomever else might net young prospects as general manager Al Avila pans for gold.

Owed $192 million through 2024, according to Baseball-Reference.com, Cabrera himself will not be afforded a shot to win somewhere else. No chance anybody takes that contract off Detroit's hands.

"I say to God, 'Thank you for giving me the chance to be here,' and that's it, you know?" Cabrera tells B/R. "I never take anything for granted. I'm thankful to be here. There's no issue about what's going on."

From a distance, an assembly line of stars exiting Motown check their rearview mirrors in the way former teammates do when they understand the competitive fire of one of their own is fenced in.

"He's trapped in it," former Tigers star Torii Hunter, now a special assistant in baseball operations for the Minnesota Twins, tells B/R. "But one thing about Miguel, he's going to go out and take care of business. I don't know if guys will walk up to this guy. He's a superstar. But all of those young position players should go up and ask him a lot of questions.

"At this point, this is where you give it back. All the winning, all the playoff experience, the Triple Crown, the home run titles, everything he's put into this game and learned, he's got to give it back to these young guys. That's how you help rebuild."

Yes, Cabrera says. He is on board.

"I'm here to play," he says. "I'm not here to give my opinion of what's going to happen. I'm here to do my job, to help win games and to help the process."

Cabrera sees the earthmovers all around him and feels the tremors. He has known Avila since he was 15. Avila signed him with the then-Florida Marlins organization in July 1999. They have a mutual trust, which is no small part of the reason Cabrera isn't about to make waves.

"He understands what his role here can be, and he's a professional," Avila says. "You know, you sign a contract, you come to play. You come to win and you're a pro."

Avila says Cabrera reported in great shape, having worked harder than ever this winter. He had to. Father Time shows no mercy. And Cabrera must be especially diligent about his back, which he injured during last year's World Baseball Classic and which wound up sabotaging his 2017 season. So when he waves off an interview en route to getting his back worked on, it's understandable.

"It's tough, man," says Justin Upton, who spent most of the last two seasons in Detroit but is now playing alongside Mike Trout and Albert Pujols with the Angels. "Miggy is a competitor. He wants to win. And when a team is going through a rebuilding process, it can be tough on a player, energy wise."

Even the smallest things can be a challenge. No, Cabrera says, he does not even know the names yet of some of his new teammates. Then again, he says with a sly smile, that's nothing new.

"I've been here for 10 years and most of my teammates, I don't even know their names," he says.

C'mon. Even in the old days, Miggy?

"No," he protests. "Even in the old days. You can ask any player if I know every name and he'll say no."

So what, then, did you call them?

Hunter, in Florida, and Kinsler, in Arizona, both roar with laughter when they hear this.

"That's so true. That's 100 percent true. And he has this funny way of saying it. He sticks his hand out and says, Bro…bro…broohhh."

Kinsler says, "He knew my name, but then, my locker was right next to his, so he'd better.

"But…now that you say that, maybe he didn't."

Though Cabrera may not know his teammates' names, he understands that he is expected to help guide a new-look clubhouse through what promises to be a difficult season ahead.Mike McGinnis/Getty Images

On the field, he's performed with a singular determination that has boosted his luster. He played through a sports hernia for the last six weeks of the '13 season before the Tigers' last, best chance at a World Series title fizzled against Boston in the ALCS.

"He just mowed through it," Hunter says. "He should have been sidelined, but he knew we needed him in the playoffs. I've had it before. I played through it for five weeks, and I couldn't go no more. This guy played through it. I'm tough. That guy's tough."

Cabrera refused to allow trainers to examine him during that time because he knew they might order him to the sidelines. Finally, he relented on one condition: You can look at me, Cabrera told them, but you have to promise that whatever you find, you allow me to stay on the field.

"Absolutely true," Hunter says. "And some of the balls hit in the gap became singles that should have been doubles, but he was still getting clutch hits and we were still scoring runs."

He thinks about this as he watches a reconstruction that rivals anything on the Detroit-area freeways.

"I'm here to do what they ask me to do, and they ask me to play baseball and do everything on the field, and it's worth doing," he says. "I have nothing to say about rebuilding because it's none of my business.

"I just have to be ready to play, you know?"

Cabrera worked extensively on his core over the winter because of past injuries and because he's reached the age where it is difficult to get the body to do what you ask of it. Playing catch-up for the rest of the season following last spring's back injury, he finished at .249/.329/.399 with 16 homers and 60 RBI in 130 games. In his mid-30s, Cabrera's Triple Crown-peak surely is ancient history. But as the greatest right-handed hitter of our generation and one of the best ever, Cabrera is determined to bend Father Time to his will, rather than vice versa.

"You want to see that kind of talent on contending teams," says Martinez, Cabrera's old teammate, who now is with a strong Red Sox club. "That's when you get to appreciate it."

No, this transition is not going to be easy on Cabrera's body, and it sure as hell isn't going to be easy on his psyche. Keeping himself in one piece while giving of his time and energy to the future faces of the Tigers around him will be laborious and, at times, exhausting.

"Why not rebuild a team around Miguel Cabrera if he's going to give it all back?" Hunter asks. "What's in his mind is nothing but wisdom. If I was going to rebuild a team, it would be around a Miguel Cabrera, a Mike Trout, a Bryce Harper, so [others] can learn what is this guy doing to be the best. What does it take?

"I was in Detroit for two years and had a chance to watch him work behind the scenes. I'm thinking a guy like that doesn't have to work as hard. But he worked just as hard as anybody in that clubhouse. He came down to the cage, and it was like his office. He hit, he did what he had to do, and when it was time, it translated on the field."

Now Cabrera's influence can be just as wide-reaching, as long as he remains on board with the plan.

"For the two years I was there, we laughed so much that my abs are still hurting," Hunter says. "With Prince Fielder, Miggy, myself, Victor Martinez, Austin Jackson…we had a great time over there. As far as character and a guy who wants to laugh, check. I want him on my team no matter what."

Last year, though, was no laughing matter as Avila steered the organization and its fans into the unenviable task of rebuilding. He dug back into his past when he was with the Marlins, recalling how out of the ashes of the 1997 World Series team came the '03 world champions led by two players he signed: Cabrera and ace Josh Beckett.

"So I know it can work," Avila says. "It's just a process. Hey, we tried, right? And now you can't push the envelope any more. You hit a brick wall, the payroll got to a point where it was not sustainable anymore and you're not going to go three years over the luxury tax. [The Yankees and Dodgers aren't] doing it, and we certainly weren't going to do it. So, time to start over."

Miggy understands the process, Avila says. "He's a professional, and he's been great."

As we chat in the tunnel's darkness, Cabrera says he hopes he's still here when the light again appears. He appreciates everything he's been through in Detroit. And he appreciates the Tigers' rich history. Hall of Famer Al Kaline and former slugger Willie Horton still frequent the ballpark, and Alan Trammell and Jack Morris will be inducted into baseball's Hall of Fame in July.

"You're talking about big names," Cabrera says. "You've got to have respect for these guys as a player because of all the good for the city. They've already done it. … You're dreaming to make it that far," he says of the Kalines and Trammells. "… Now, we're still here, and we want to do something special for the city."

So he discusses how it is not fair to talk about him or anyone else in the same breath as those who already have helped shower Detroit with World Series trophies and golden memories. No, there is no need for Miggy to explain himself, to emphasize that he's not trying to be a jerk. There is a monumental task ahead of him and, now more than ever, his work is cut out for him.

How to count service time for Tigers’ brightest prospects in 2020 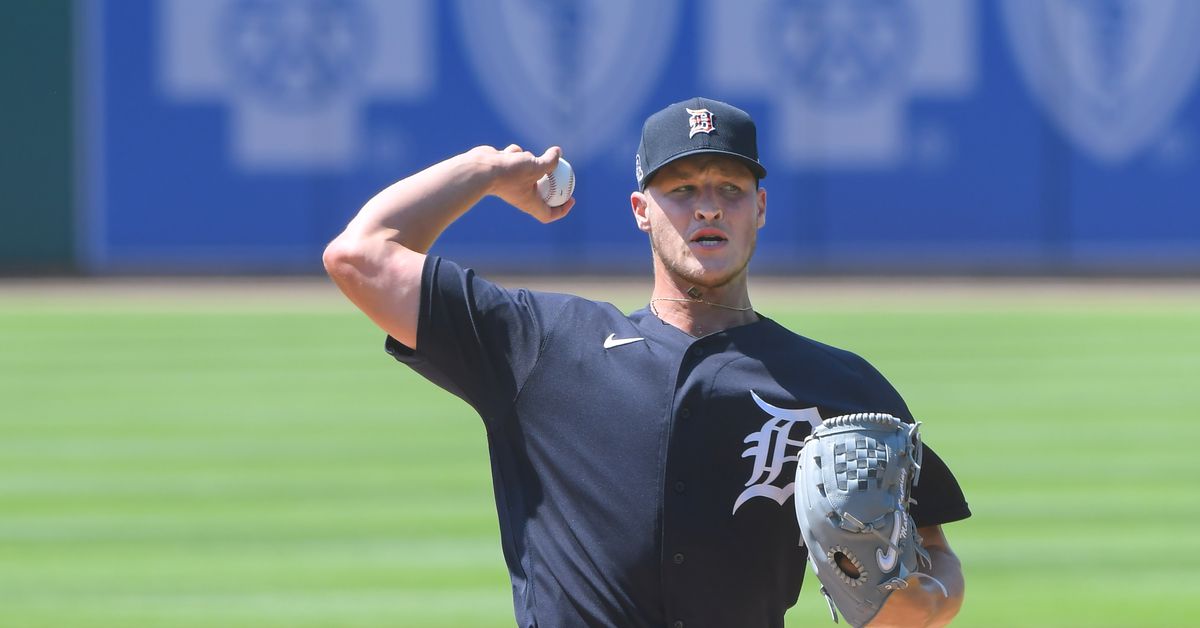 How to count service time for Tigers’ brightest prospects in 2020

Patrick OKennedy
via Bless You Boys

The All-Star Comparison For Spencer Torkelson

The All-Star Comparison For Spencer Torkelson