Six sacks ago, Adrian Clayborn was as close to anonymous as any career NFL player.

The 29-year-old Atlanta Falcons defensive end was picked in the first round of the 2011 draft, spent four years with the Bucs and is now in his third season with Atlanta. In all that time, he's garnered few headlines about anything he's done on or off the field beyond contracts or injuries. In other words, he's like most athletes in the NFL: dedicated, skilled and completely off all but the most hardcore fans' radars.

Until Sunday, that is, when he took Dak Prescott down a franchise-record six times. It was the first time a player had six sacks in an NFL game in a decade, and only the fifth time a player had ever reached that mark in NFL history. While it's true he was taking advantage of a woeful performance by Dallas Cowboys left tackle Chaz Green (a similar situation to most players with six-plus sacks in a game), the accolades rolled in nevertheless, as well as a hefty performance bonus breathlessly reported by outlets across the country.

"It's definitely strange," Clayborn said a phone interview with B/R. "I'm not used to it—no offense, I just don't really like the spotlight or all the attention. It's cool, but just different for me I guess."

That spotlight—for however long it lasts in the fickle NFL media cycle—reveals a player who's not just remarkably talented and hard-working, but also thoughtful and engaged.

Clayborn was born in St. Louis with a disorder called Erb's palsy. Nerves in his upper arm were damaged as a result of a neck injury suffered during birth (and at 11 pounds, Clayborn's was not easy), so he spent his childhood going to physical therapy. He still can't extend his right arm all the way.

His late father was incarcerated for much of his childhood, and his 21-year-old brother was shot and killed when he was just 10. Clayborn pushed forward despite those hardships and the physical challenges he faced, and wound up at Iowa. Since joining the NFL, he's had to overcome four serious injuries to his knees and arms. Add up all the adversity Clayborn's overcome, and six sacks start to look like child's play.

Despite the fact that he's not the star of the team, Clayborn was among the most outspoken players on the Falcons when President Donald Trump came down on Colin Kaepernick. He rebuked the president on Twitter for saying NFL players were "privileged."

As an NFL vet, he has better perspective than most on the league's various challenges and controversies. Like every player, he has an exceptional story that usually gets ignored in favor of takes on his talent or lack thereof. Here, Clayborn, the NFC's Defensive Player of the Week, talks about the sacks, the NFL and how Falcons coach Dan Quinn is more woke than you'd think.

Bleacher Report: While you were playing, did you have any sense that you were breaking a record?

Adrian Clayborn: Nah, I was just out there playing. I didn't know they counted the second one as a sack; I thought it was just a tackle. So I wasn't really counting, but then they started putting it up on the board ... it was so surreal, I couldn't believe it.

Clayborn: I was more than fine with one sack. That alone is a great day for me.

B/R: What's been the funniest reaction you've gotten so far?

Clayborn: Some of the memes people have made on Twitter and Instagram are pretty funny—just putting the crying Jordan face on Dak [Prescott] and stuff. Family and friends have been texting me, telling me that it's long overdue and that they're happy for me.

B/R: With the Falcons, it hasn't been a perfect season so far. Has there been a moment when things kind of clicked, and you felt like maybe the team had finally shaken the Super Bowl loss?

Clayborn: We started out the season great, 3-0. We were clicking. Losing the last four out of five or whatever, I don't want to go back to last season, but the beginning of that season wasn't that great either. We lost our first game of the season. We had a rough start, and then we started clicking towards the middle and by the end, we really got going. It's the NFL, you're not going to win every game, and we're back on the right track now.

B/R: You've had some season-ending injuries in the past, including last postseason when you tore your biceps just after returning from both an MCL and meniscus tear. What does having a game like this mean in that context, of coming back from an injury?

Clayborn: It's just an awesome feeling. After this last injury, I was gonna hang it up. I was just mad at the world, mad at everything—why'd this happen to me?

Once I calmed down, after probably a month, I just thought about it more. It really was my fault, I shouldn't have stuck my arm out there. I shouldn't have done this, I shouldn't have done that. Once I got past that—really, once I got off the stupid brace and started moving around and feeling better about myself, I knew I was ready to come back for another year. I'm so glad I didn't quit, that I came back for one more season. It's been great to have that game, to have it all be worth it—the surgery, the rehab and all that stuff.

B/R: Sometimes it can seem like fans don't totally get what goes into rehabbing an injury.

Clayborn: It's definitely tough. Getting back from the MCL tear, feeling good and having it happen again really sucked. The good thing was I'd been through it before: with the ACL on my right knee, with the other bicep. Once I got over it, I knew what I had to do to get back.

B/R: What do you think is the biggest misconception people have about playing in the NFL?

Clayborn: Some people maybe take for granted how hard this game is, and how hard it is to get sacks—to even be on the field. People just think we have all these talents. It's very rewarding, but it's a hard game.

B/R: It seems like you may have raised the bar for yourself with last week's performance—some fans might be expecting this many sacks every week.

Clayborn: I hope they don't think that [laughs].

B/R: How has the NFL changed since you were first drafted?

Clayborn: I guess I'm considered an old guy now in the NFL. I definitely feel like it's younger. It's a young league. It could just be me getting older.

B/R: You were recently fined for a hit on Tom Brady—you'd only been fined once before and won your appeal. Are you planning to appeal the fine?

Clayborn: I appealed it—had the call last week, waiting to hear. Hopefully, I win it again, because it wasn't a dirty hit or anything. It wasn't high. We'll see—would be nice to have that money back.

B/R: Is that a point of pride, keeping your record clear of those kinds of fines?

Clayborn: Yeah, definitely. I'm definitely not a dirty player. I'd never try to do something vicious like that—plus, I don't want to hurt myself.

Clayborn: Definitely. I think [Brady] and other quarterbacks get more protection—maybe just because they're more pocket quarterbacks and not necessarily runners, I don't know. Guys like Aaron Rodgers and Cam [Newton] and all those guys definitely get hit a lot more, and a lot more violently.

B/R: I'm a Seahawks fan, and seeing the hits Russell Wilson takes can be rough.

Clayborn: He takes a beating.

B/R: I'm hoping you guys go a little easy on him on Monday.

Clayborn: That is not the plan [laughs].

B/R: I know being born with Erb's palsy meant that you spent a lot of your youth going to physical therapy. Did that prepare you in any way for what it takes to be a professional athlete?

Clayborn: I was a kid, so I didn't really think of it as anything but going to physical therapy, going through life. But it definitely made me work harder than my peers in playing basketball, baseball and football. I had to figure out ways to beat people in my own unique way, which helped me prepare for college and the NFL.

B/R: You were pretty vocal about the NFL protests back in September. Now that things are a little quieter, how are you feeling about the movement and ensuing controversy?

Clayborn: I think things are headed in a positive direction. I know here with the Falcons, we're working on doing things in the community to bring police and people in the neighborhood together to talk about all of it. To have dialogue. I've seen around the league that other teams are doing the same thing. This is what is needed.

It was ugly with people making the protests about the flag, which they weren't. But this is what it was all for.

B/R: At the time, you pointed out Trump's assertion that NFL players are privileged was pretty flawed. Is that a topic you've covered at all in the locker room?

Clayborn: We've talked about it a little bit. Dan Quinn, he's very honest with himself. He knows he's a white man, and that he could never know what it feels like [to be black]—but he has empathy. He's told us that many times.

We're a pretty open and honest team, and that's what I love so much about us. We communicate well, and when there are issues on the field or off the field, we bring it up.

B/R: Your late father was incarcerated when you were a kid. Does that make this issue—specifically, the calls for criminal justice reform—more personal?

Clayborn: I didn't really think about it like that, but I've definitely seen police brutality. I've witnessed it. By no means am I saying that that's all police, but it definitely needs to be changed. I've heard nothing but good things [about the NFL protests] from family and friends in St. Louis, who have thanked me for speaking out on it. All positive.

B/R: You tweeted recently about getting tested for performance-enhancing drugs an...unusual number of times.

Clayborn: I got tested three weeks in a row a couple weeks back. It was no big deal, I was joking as far as [being mad about it]. I'm not trying to hide anything, so I don't really care. Just five minutes out of my day.

3 drug test in 3 weeks😡😡. NFL you are wasting your kits. This is not the body of someone that take steroids if you haven’t noticed lol

B/R: Do you feel like you get tested when you perform particularly well?

Clayborn: Prior to that happening, I don't think I was performing well, so it definitely wasn't that. I don't know why it was me, but I don't know how random it is. I don't take steroids, so I don't care—they can test me all they want.

B/R: What do you do in your downtime?

Clayborn: In the season, not much. A lot of relaxing. I golf in the offseason, got my dogs—hang with them. I'm a big movie watcher. I saw It, that was good, the new Saw movie, that was good—I saw the movie Split, that was crazy.

B/R: What about music?

Clayborn: I listen to a lot of Atlanta-based rappers now—2 Chainz, Future, Migos, all those guys.

B/R: Have you met any of them?

Clayborn: I've seen them, but I've not met them. That's all Julio [Jones].

B/R: Maybe they'll say hey once they hear about your sacks.

Clayborn: That would be pretty cool. 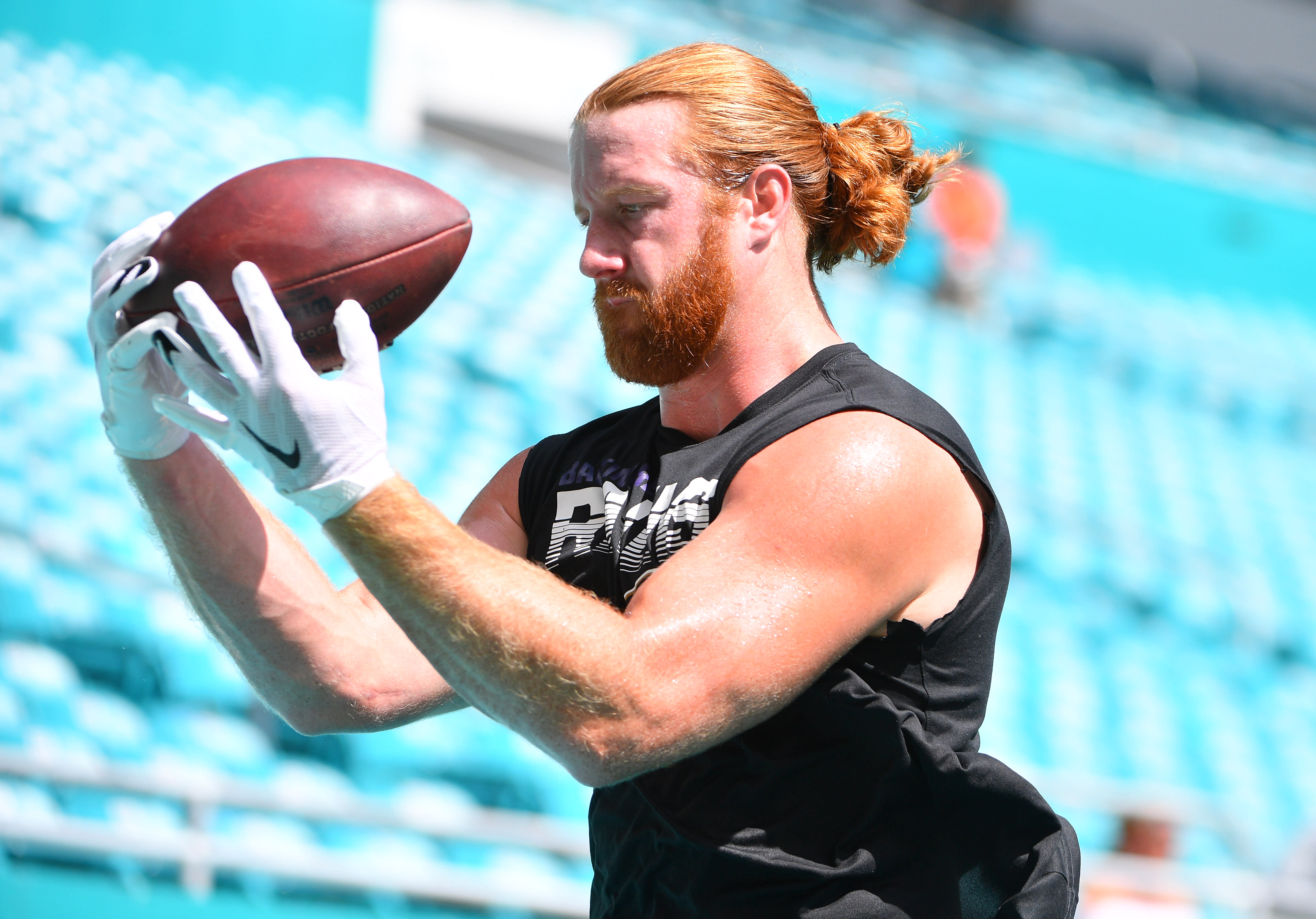