Claude Giroux has seen his points total drop each of the last three seasons. He finished 2016-17 with 14 goals, his lowest over the course of a full season since 2008-09.

The Philadelphia Flyers captain has, especially over the last two years, seen his eight-year, $66.2 million contract become an albatross. His deal holds a $8.275 million cap hold through the 2021-2022 season and a no-move clause, meaning Giroux has final say on any deal.

The Flyers appear open to making a move themselves. Bob McKenzie of TSN appeared on Montreal's TSN 690 and said the Flyers are looking at potential deals, though nothing is imminent.

Per Chris Nichols of FanRag Sports, McKenzie said: "They did say that there have been a couple of calls recently from teams asking just, 'Is he available? Would he be available? Would they consider going down that road?'

"And the Flyer answer is very simple: A) He's got a no-move clause, B) We'll obviously listen."

The Flyers have one problem: It does not appear Giroux is remotely willing to leave Philadelphia.

"Ah, I haven't really thought about it. I've been in Philly for nine years, and I don't plan on leaving. Like I said, it's not for me to make those decisions, and I'm not leaving," Giroux told reporters in April.

While not to the same extent, there are parallels here one could draw between Giroux and Carmelo Anthony in the NBA.

Like the Flyers, the New York Knicks are in the midst of a rebuilding stage and have young stars ready to take the spotlight. Like the Knicks, the Flyers have an extremely talented but expensive former franchise face who is taking a up a lot of cap space.

Like Anthony, Giroux has final say on whether he gets traded.

The difference here is years committed. While the Knicks could realistically buy Anthony out and get out from under their uncomfortable situation, Giroux's contract does not have an end in sight. The Flyers still like having him around and it's possible he'll return to form next season, but the contract issue isn't going away.

On this date in Flyers history: Giroux wins game 3 in overtime of the 2010 Stanley Cup Finals 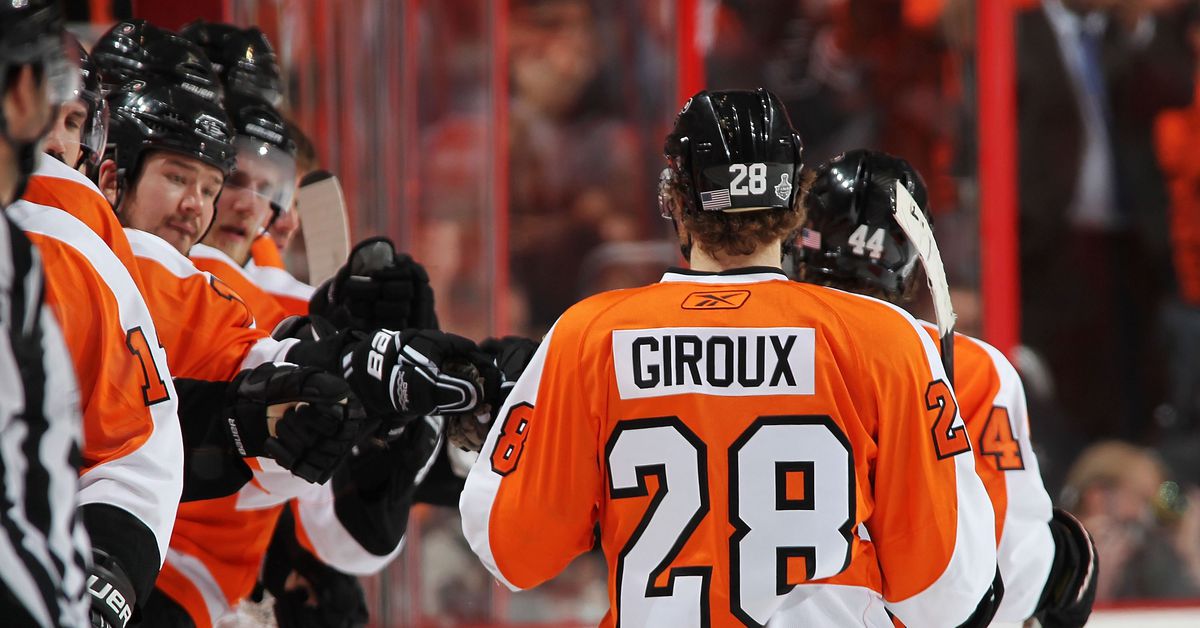 On this date in Flyers history: Giroux wins game 3 in overtime of the 2010 Stanley Cup Finals

Catching Up With A Possible Flyers Draft Prospect: Sam Colangelo

Catching Up With A Possible Flyers Draft Prospect: Sam Colangelo