Quarterback Sam Bradford's future with the Philadelphia Eagles was in question after the team acquired the No. 2 overall pick in the 2016 NFL draft from the Cleveland Browns on April 20 and selected quarterback Carson Wentz.

Bradford Comments on Prior Trade Demands

"I was frustrated," Bradford explained, per Les Bowen of the Philadelphia Daily News. "Not sure my head would have been here those two weeks."

According to Jimmy Kempski of the Philly Voice, Bradford admitted that issues finding a trade partner played into his decision to return to the Eagles:

Bradford on whether he came back because trade market dried up: "Partly so."

Per Eliot Shorr-Parks of NJ.com, Bradford didn't express any regret regarding his trade request despite the media firestorm it created.

According to Bob Grotz of the Delaware County Daily Times, Bradford is of the belief that his teammates are fully supportive of him as the starting quarterback:

Bradford says guys conversations with teammates tell him "guys are behind me 100 percent, &amp; that's all you can ask for as a QB.." #eagles

Per Dave Zangaro of CSN Philly, Bradford said it was agent Tom Condon's suggestion to request a trade after the Eagles selected Wentz with the No. 2 overall pick in the NFL draft.

While Philadelphia is clearly grooming Wentz as its quarterback of the future, Bradford pledged to help him along the way, according to Lorenzo Reyes of USA Today:

Bradford says he'll do what he can to help Carson Wentz: "If I don't do that, I think it's not having respect for the game." #Eagles

Bradford's future with the Eagles is very much in question, but he is back to being committed to the team for at least the 2016 campaign.

"My feelings haven’t changed," Eagles coach Doug Pederson said, per Zach Berman of the Philadelphia Inquirer. "He’s my guy. He’s the No. 1 guy. I just want him to embrace that."

"Bradford has rejoined the [Eagles] after a two-week absence," reported ESPN.com. "The quarterback rescinded his trade demand and reported to the NovaCare Complex on Monday, agent Tom Condon told ESPN's Sal Paolantonio."

ESPN's Adam Schefter provided a statement from Bradford upon his return:

Connor Barwin told SportsRadio 94 WIP that he received a text from Bradford stating the quarterback would report to the Eagles' offseason program on Monday, according to David P. Woods of the Score. NFL Network's Ian Rapoport also reported Bradford informed the Eagles of his decision to report.

Barwin told SportsRadio 94 WIP on May 6 that he expected Bradford to be back in a week or two, per Dan Graf of Fox Sports:

I spoke to him, and I'll let him come out and speak to you guys and say what he has to say or wants to say, but I think, obviously, he maybe didn't see it coming and was surprised by it. But I expect him to be back in the next week or two and be the starting quarterback next year.

He's still on the team, he has to come to work and be the quarterback. ...

From my conversation with him, it sounded like he is coming back sooner rather than later, so we'll wait and see. I know he'll be here for the mandatory stuff. But, again, this is just my casual conversation with him. You guys will have plenty of time to talk to him, and he can show up when he wants to be here.

"I haven't really talked to him, but word on the street, from guys that have, is that he'll be back pretty quick and be ready for OTAs," Eagles offensive lineman Lane Johnson said in an interview with 97.5 The Fanatic, via Arun Srinivasan of the Score. "I expect him to be back, this week or probably next week, that's the word on the street, anyway."

Frank: 'I Think [Bradford Is] Going to Retire'

During an appearance on Quick Slants, Reuben Frank of CSNPhilly.com said he believes Bradford will step away from the game:

Roseman Comments on Bradford in Wake of Trade Rumors

"'No,' [Eagles executive vice president of football operations Howie Roseman said on ESPN's Mike and Mike] when asked if the Eagles would trade Bradford," per Cork Gaines of Business Insider.

Roseman continued: "We're going to do what's in the best interest of our team. ... You know, I have not spoken to him. I have not reached out to him. So I would probably have to go and talk to some people here and ask them the same question."

"No, Sam's our starting quarterback," Roseman said April 28 when asked if the team would trade Bradford, per Bob Grotz of the Delaware County Daily Times.

Roseman also reiterated his support of Bradford to Comcast SportsNet's John Clark (via Chris McPherson of PhiladelphiaEagles.com) following an April 25 report from Schefter that Bradford had requested a trade away from the Eagles:

"I want to reiterate our support for Sam Bradford and go back to our statements last week - that Sam is our starting quarterback," Roseman said. "His agent and Sam know how we feel about him. These workouts are voluntary. We look forward to seeing Sam again in the near future."

As a follow-up question, Roseman was asked if there was concern that Bradford will not show up for the mandatory portions of the offseason program.

"No, I think you talk about Sam and what a pro he is," Roseman said. "Him and his agent, we've worked well together for a long period of time. He loves to play the game. We look forward to seeing him soon."

Roseman insisted April 20, per NFL.com's Kevin Patra, the team is moving forward with Bradford as the starter: "Let me be clear, [Bradford] is our starting quarterback. We told Sam that. We intend to support him and the moves we made this offseason we believe will give us a chance to compete this season."

Bradford Reportedly Not Responding to Pederson

Schefter reported prior to the NFL draft that the Denver Broncos didn't expect the Eagles to trade Bradford to them or any other team. Denver would go on to trade up in the first round of the draft to select quarterback Paxton Lynch.

On April 27, Rapoport reported the Broncos had preliminary talks with the Eagles surrounding Bradford, but "no compensation was discussed," and the Eagles are "not inclined to move him."

That report came a day after Mike Klis of 9News cited a "prominent" source when reporting the Broncos had reached out to the Eagles about acquiring Bradford, but the asking price was too high.

Jeff Darlington of NFL Network said the New York Jets have no interest in Bradford, and the quarterback is not interested in playing for San Francisco 49ers head coach Chip Kelly, per 95.7 The Fanatic. 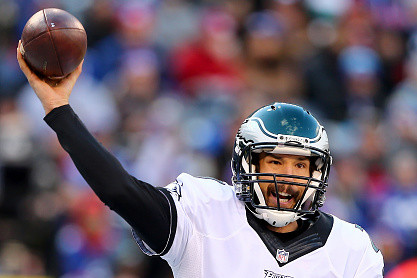 Condon told SiriusXM NFL Radio the Eagles haven't given him permission to seek a trade, but Bradford will not participate in voluntary workouts, per Alex Marvez of Fox Sports 1.

Condon also said Bradford is looking for a place where "he's going to stay for a long time if he plays well," per Marvez. Condon added Bradford wants to know "he's the man, not holding a place card wondering where he's going at the end of the year."

Charles Robinson of Yahoo Sports reported Sunday that Bradford has not asked the Eagles to trade him and "has no plans to do so." However, Schefter reported Monday morning the "Eagles have been informed [Bradford] wants to be traded and he will not be showing up for their offseason program any longer."

Robinson responded to Schefter's report, stating that he was "lied to outright" if Bradford has requested a trade. Rapoport added Monday the "Eagles were blindsided by Sam Bradford's trade request but have not budged on their view: He is their starter. That remains the case."

Cole reported on April 21 that Bradford was likely to ask for a trade out of Philly: 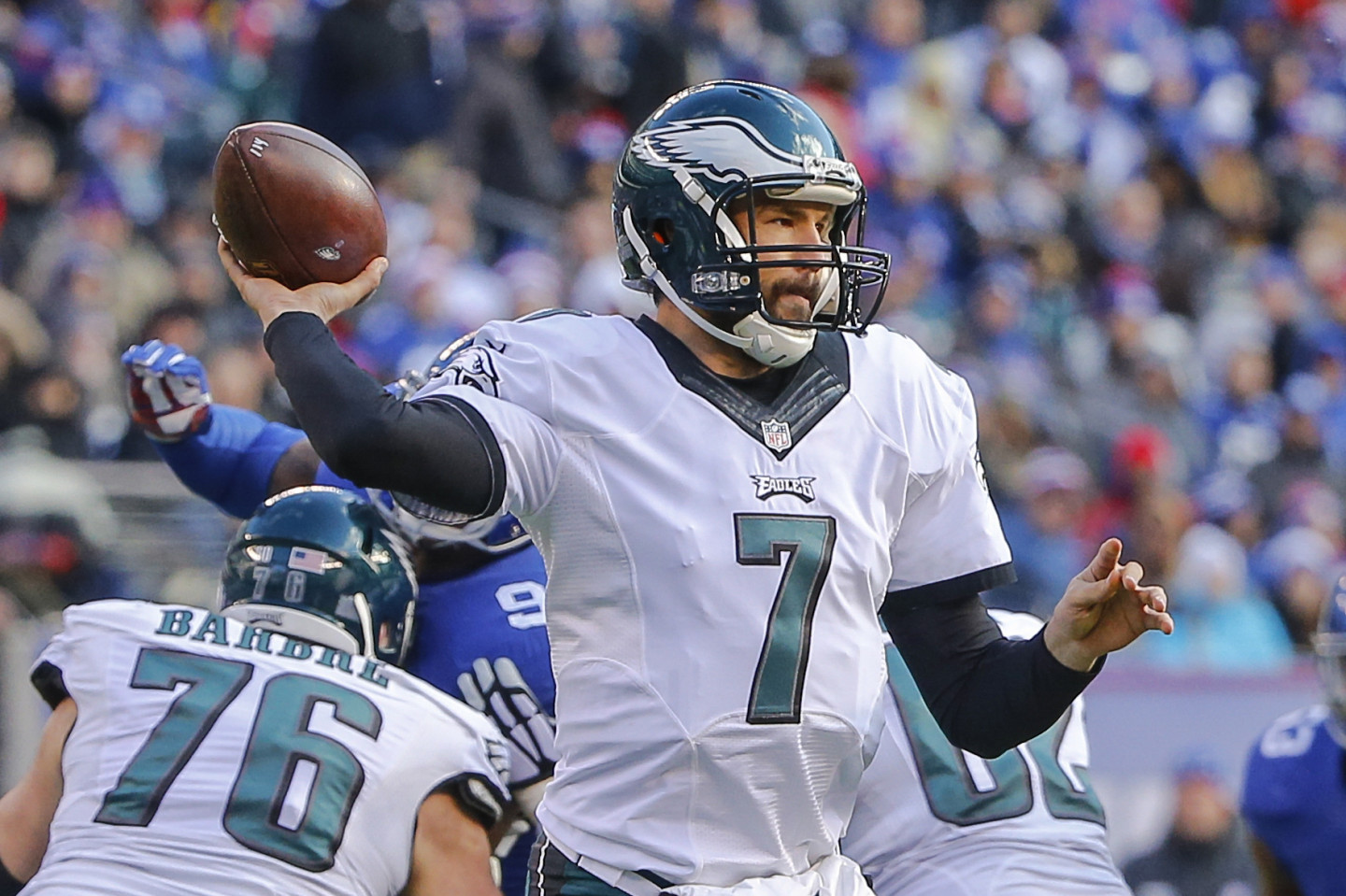 Schefter reported on April 20 that Bradford was upset about the Eagles' decision to trade up and what it means for his long-term status as their starter:

The Eagles' acquisition of the No. 2 overall pick means they will likely select a quarterback: either Carson Wentz or Jared Goff.

While that leaves Bradford's standing in a state of flux, Rapoport reported the move won't result in a trade involving the No. 1 overall pick of the 2010 draft:

The #Eagles aren't trading Sam Bradford. Instead, they created a situation where their rookie QB doesn't have to play for a year (or two).

Bradford went 7-7 in 14 starts for the Eagles last season, throwing for 3,725 yards, 19 touchdowns and 14 interceptions.

Philadelphia also signed quarterback Chase Daniel during the offseason due largely to his familiarity with Pederson during their time together with the Kansas City Chiefs.

Bradford signed a two-year contract worth an average of $17.5 million annually in March, but it is unclear if he will see the end of that deal.

Although the Oklahoma product is likely the favorite to start in 2016 regardless of what the Eagles do with the second pick, he may not be given a long leash.

Trading up in the draft came across as a vote of no confidence in Bradford, but in terms of winning games during the upcoming season, he may still be their best option under center.