So someone on the public Ivy message board has decided to deride our Austin Knowlin (pictured above), saying he isn't among the top five receivers in the Ivies.

I beg to differ, but I'm willing to put up or shut up with my own top-five list.

Some of my top five are really too much a part of a total wide receiving crew to fairly separate as individual players. 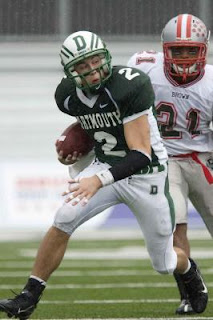 And he even was willing to sacrifice some of his receiving stats to play QB when he was needed.

Dartmouth will probably continue to struggle this season, but expect McManus to put up bigger receiving numbers in 2009.

He led the team in yards and was the go-to guy on just about every 3rd-and-long or 3rd-and-goal. As a rising junior, he has a lot of upside.  Whoever becomes the starting Big Green QB next season will surely see McManus as his best friend. 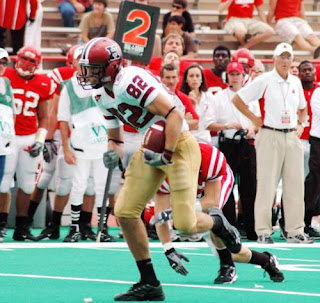 Luft may not be as quick or elusive as many other wide receivers in this league...but he doesn't have to be.

However, a big reason for his success was the rhythm he established with now-graduating QB Chris Pizzotti and that won't be there automatically with the new QB this season.

Luft also benefitted and will continue to benefit from his fellow receivers, like the very elusive Adam Chrissis and the tough Chris Lorditch, both of whom joined Luft in ripping the Columbia secondary apart when they faced the Lions last season.

But the big question mark is whether Luft and company will remain as dangerous without a QB as talented and tough as Pizzotti. 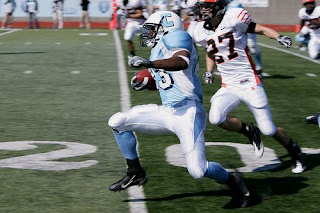 "AK" saw his numbers fall last season, but none of the other top receivers in this league has had to play with three different starting QB's and radically different systems over the past two seasons. And he's the only one of the top receivers with a QB who runs as often and as well as Millie Olawale.

Knowlin's ability to get open, even when everyone in the stadium knows the play is to him, is his best attribute. He's also a great breakaway threat and can often bounce off tacklers despite his smaller size.

Knowlin has some good supporting cast members in Taylor Joseph, Mike Stephens, and Nico Gutierrez (when healthy, especially in 2007), but he has nothing like the help Luft enjoys at Harvard and the receivers at Brown enjoy.

Knowlin's added role as a killer punt and kickoff returner isn't technically what makes him a great wide receiver, but it helps. 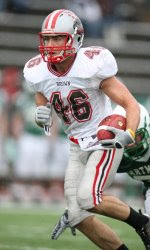 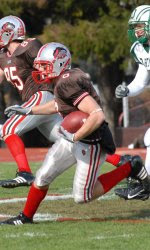 Buddy Farnham is the anti A-Rod. He puts up huge stats and delivers in the clutch. In key wins over Harvard and Penn last season, Farnham was the guy who had the big scores at the crucial moments.

Farnham keeps in the family as the son of Brown all-time great receiver Mark Farnham, class of 1980.

Bobby Sewell is equally "clutch" and his ability to line up almost anywhere on the line of scrimmage and move around a lot before the snap drives opposing defenses crazy.

Some of Farnham and Sewell's shine might wear off this season with a new QB at the helm, but what they've accomplished in two varsity seasons already has made them Brown legends.

Unless head coach Phil Estes pulls a Nick Hartigan clone out of a hat this summer, expect Brown's "Killer B's" to rack up big stats again as receivers and as runners on trick plays and reverses.

Walters is a better kick returner than a receiver, but he's dangerous and often gets open down the sideline. He's another player who will have to cope with a new QB this season.

Another tandem that works better as a team. Neither one really knocks your socks off alone, but together they should give Yale's new starting QB a decent weapon this fall.