The 139th Kentucky Derby is inching closer, which means thoroughbred racing's epic Triple Crown is set to kick off.

It's been 35 years since we've witnessed a Triple Crown winner. The last to accomplish the remarkable feat was Affirmed in 1978. In 2012, I'll Have Another came painfully close, winning the Kentucky Derby and Preakness Stakes only to be scratched from the Belmont Stakes because of a tendon injury.

With a deep and talented 20-horse field set to run the legendary 1 1/4-mile dirt track at Churchill Downs, there are sure to be a few surprises.

But for now, let's get to know a few of the early favorites to win this year's Run for the Roses.

Winner of four straight races, Orb looks like one of the biggest threats to win the first leg of the 2013 Triple Crown at Churchill Downs this May.

Orb has three victories in three starts in 2013, including an incredible win in March's Florida Derby at Gulfstream Park. He won the Fountain of Youth Stakes a month earlier.

Joel Rosario will sit atop Orb on Derby day, taking over for John Velazquez. But regardless of who's riding Orb at Churchill Downs, he'll be one of the favorites to win. Orb has shown he can win from any post and in any fashion.

Whether he jumps out to the front or is hanging back through the first few furlongs, Orb is strong on dirt and has done nothing but win as of late.

Well-known horse trainer Todd Pletcher has been working with three impressive colts this year, all of which look poised for strong finishes at the Kentucky Derby. The first Pletcher-trained horse to keep an eye on is Verrazano.

The colt has yet to finish second or worse in a single race, and has posted big-time first-place finishes at the Tampa Bay Derby and the Wood Memorial Stakes, beating out fellow 2013 Kentucky Derby challengers in Java's War and Normandy Invasion in the process.

Verrazano will be ridden by John Velazquez at Churchill Downs this May. Velazquez is best known for jockeying Animal Kingdom to a Kentucky Derby victory in 2011.

Can he do it again two years later atop Verrazano?

Another promising Todd Pletcher-trained horse to watch for this May is Revolutionary, who edged Mylute in March to win the Louisiana Derby at the Fair Grounds.

Overall, Revolutionary has won half of his six career starts, making him a serious threat in the 139th Run for the Roses. Plus, he'll be ridden by well-known jockey Calvin Borel, who has jockeyed three horses to victory at the Kentucky Derby since 2007.

Keep in mind that the tandem of Pletcher and Borel has won the Kentucky Derby before, in 2010 behind the stellar performance of Super Saver.

Last year's Kentucky Derby-winning trainer Doug O'Neill (I'll Have Another) will be watching over Goldencents at Churchill Downs. The three-year-old colt put forth a strong effort in the Santa Anita Derby, running towards the top from start to finish and posting his second win of 2013.

The man who will be riding Goldencents on May 4, needs no extra motivation either. Jockey Kevin Krigger is only the second black jockey participating in the Run for the Roses since 1921 according to Men's Journal's Ryan Goldberg.

As if there weren't enough intriguing storylines surrounding Goldencents this spring, the colt is co-owned by Louisville basketball coach Rick Pitino, who led the Cardinals to a national championship this April.

A Road to Victory in the Oaklawn Stakes

A Road to Victory in the Oaklawn Stakes

Castellano Given All-Clear After COVID-19 Positive 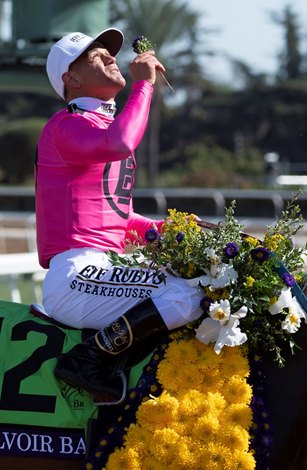 Castellano Given All-Clear After COVID-19 Positive