"The source of Williams’s struggles is somewhat elusive, but injuries — including a banged-up right (shooting) wrist and sore right elbow — have surely played a role. He also has a left-ankle injury that will probably require surgery next summer. Williams said it is not the bumps and bruises, but his general comfort level, that is to blame."

These injuries could certainly influence why Deron Williams isn't the .507 shooter he was back in 2007-2008. I would like to posit another reason for his decease in efficiency, though. Take a look at Deron's current shot distribution chart for the 2012-2013 season, and pay special attention to his shots near the rim. 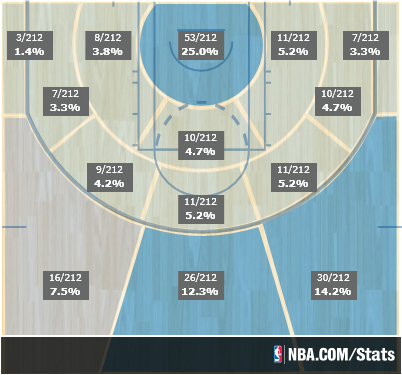 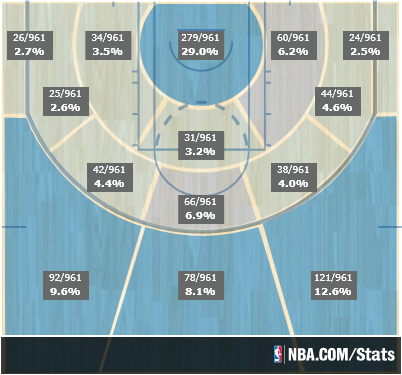 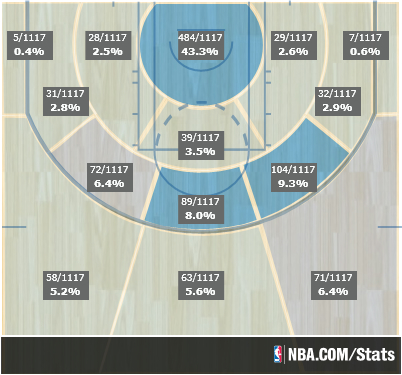 Deron Williams has roughly maintained the same level of accuracy on long two-point tries, though. In 2007-2008, Williams was 46 percent on long twos, which is only three percent better than his current mark from that range (via HoopData).  Williams' free-throw percentage has also held steady over the last two years. Subjectively, it doesn't look like he's shooting any differently than he used to.

The problem, as I see it, is that so many of his attempts happen far from the rim. It could be a matter of diminishing athleticism, but I would hazard that offensive scheme has its impact. In the flex-cut Jerry Sloan system, Deron Williams received screens below the three point line, as part of a constantly moving offense. This allowed for many driving lanes to the rim, many shots at the basket.

With the Nets, Deron Williams more often finds himself in isolation, dribbling above the arc. Sometimes, shooting well has little to do with your shooting form. This could be one of those instances.