Roda Antar celebrates his goal against UAE in September

Few matches in international football have brought collective joy to an entire nation, filling its people with short-term optimism and a feeling that they are on top of the world. The 2007 Asian Cup final was one such occasion, when war-torn Iraq fielded a team combined of Muslim and Christian players, defied all odds and overcame all obstacles, ending with Younis Mahmoud lifting the Asian Cup. That was a special moment. The events of autumn 2011 were similar for Lebanon, who may finally be on the verge of launching themselves onto the world stage.

Make no mistake about it, nobody realistically expects Lebanon to progress to the 2014 World Cup Finals, but the achievement has already been made. In 2011, they hit their worst world ranking in the team’s history but nevertheless progressed past their World Cup preliminary, winning against Bangladesh 4-2 on aggregate. Optimism was soon diminished when the next round’s draw took place, however, with the Cedars placed alongside South Korea, Kuwait and UAE (who had beaten Lebanon 7-2 only a few months earlier), all of which were far stronger—and, for that matter, richer.

However, we sit here in December and, barring an unlikely set of results in the final matchday, Lebanon will have made it to the fourth round for the first time in their history with a 2-1 home win against the team that finished fourth at the 2002 World Cup. From a campaign that started with a 6-0 defeat in Korea, the transformation under Coach Theo Bucker has made for a magical autumn in Lebanese football.

In a region where issues such as politics and religion take centre stage, on matchday, football triumphs all. Lebanese children and public sector workers were allowed home early on November 15th to make it to Camille Chamoun Stadium or to their television screens to witness what the government hoped would be a unifying moment for what up until now has been a failing national team. Those on the field didn’t disappoint. The giant-killing sent shock-waves through Asian football, Korea only this week sacked their coach in response to the defeat. 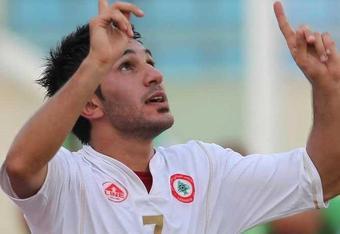 So what changed since the return game in Seoul?

In short, the answer is the management. Bucker’s first game was the 6-0 defeat, but the foundations were being set for a rapid transformation. Veteran players (the only Lebanese to play in Europe) Youssef Mohamad and Roda Antar were persuaded to end their international exile and contribute to the World Cup campaign.

Antar missed the game in Seoul but returned to captain the team to a surprising 3-1 home win the next week against UAE, a comeback with goals from Mohamad Ghaddar, Akram Moghrabi and Antar himself. UAE swiftly sacked their Slovenian coach due to the defeat to such a lowly ranked nation. Such a result was written off as a spectacular but anomalous game. However, the most important aspect of the win was what it did for the next game a month later.

Five thousand fans (impressive for Lebanon at the time) turned out in Beirut to watch the UAE win, but more than 30,000 filled the stadium to watch the national team draw 2-2 with Kuwait. Again exceeding all expectations, Hassan Maatouk, the wonderkid of Lebanese football, scored a brace which should have been enough for victory if it weren't for a late own goal denying Lebanon the win.

Still, momentum was firmly with Lebanon, who in November travelled to the return game against Kuwait with still-limited expectations but a strong travelling support. After enduring relentless pressure for 45 minutes and an injury to star man Youssef Mohamad, the away section of the crowd erupted as a beautiful flowing move set Mahmoud El-Ali to score one-on-one with the goalkeeper. Lebanon resolutely held on, helped by some magnificent goalkeeping from a man who has been consistently at the top of his game all qualification, Ziad El-Samad.

Lebanon now knew they could host Korea with no fear, a team who themselves had changed dramatically from that which thrashed the Cedars in September. With now close to full capacity inside the Camille Chamoun Stadium, defender Ali Al-Saadi raised the roof within five minutes, lashing the ball home to give Lebanon the lead. Korea equalised from the penalty spot, but they failed to capitalise on their path back into the game as El-Ali won a penalty of his own before halftime, allowing Abbas Atwi to calmly slot home a goal which will go down in Lebanese history.

Despite facing one of the best teams in Asia, the defence held strong, El-Samad produced a magnificent flying save to deny a header from finding the net, much to the delight of on-watching President Michel Sleiman.

Antar nearly put the result beyond doubt, but his effort came off the post. Nevertheless, Lebanon stayed firm and produced a famous victory that has all but secured their passage to the next round, a first for the national team. This result was made all the more remarkable by the absence of Mohamad, Maatouk and only a place on the bench for former Al Ahly (Egypt) striker Mohamad Ghaddar.

Delirious scenes followed the final whistle—players were in tears, fans had turned the stadium into a cauldron of noise and President Sleiman had made to the field to celebrate with the team. Politicians were quick to react via Twitter, with PM Mikati and former-PM Saad Hariri offering their congratulations on an event that everybody in the country knew meant something to its people.

When people talk of Qatar 2022 as not having any footballing culture, they neglect the passion that Arabs have for football. Lebanon was a case in point. A team with no history of success unanimously cheered on by its population and a result celebrated by them as if the nation had accomplished something in the grand scheme of things more notable than winning a game of football.

Should the expected happen and Lebanon is included in the next round, they will face the heavyweights of Asia and will probably not finish in a qualifying place for the 2014 finals. Nevertheless, you can expect that the team will play with no fear, believing that anyone who comes to Beirut can be defeated. Lebanese football is on the rise, and the public has a team to be proud of.

For the first time in years, tens of thousands of people flooded a Lebanese football stadium to cheer on their national team. For a country that still suffers from political instability, the future looks bright—on the football pitch at least.