Everyone also knows who the super-rookies are, such as Derrick Rose, OJ Mayo, and Greg Oden.

What about the under-the-radar players, who are making significant contributions for their teams and have taken their games to another level? Who are the NBA Rising Stars this season? Here are the ones that stand out:

With Mike Dunleavy unavailable to start the season, the Pacers needed someone to fill the starting role. Not only has Marquis Daniels played well in that role, it may be his permanent job in Indiana.

The undrafted guard from Auburn got the starting position due to Dunleavy unable to return from his injury. But as a starter, Daniels is putting up great numbers and may retain his starting job for the future. He is averaging 15.9 ppg, while shooting 45.4% and is also grabbing 5.8 rpg. He also has the ability to drive to the basket to get easy scores. His defense isn’t too shabby either, although it still needs improvement to test the best guards.

If Dunleavy is unable to return to last season’s form, Daniels could become a star in Indiana next to Danny Granger.

The Clippers have very little to be excited about for the rest of the season, who are a horrid 4-16 and virtually out of playoff contention. One of the lone bright sports for the Clippers season is the improving play of Al Thornton.

Prior to the Clippers acquiring Zach Randolph, Thornton had been the Clippers’ go-to man. In only his second season, he is improved in virtually every statistical category. The 6’ 8” forward is averaging 16.5 ppg on a respectable 45.4-percent shooting, while contributing 5.3 rebounds, one block, and getting to the line almost five times per game.

Things can’t really get worse for the Clippers in the future, so expect Thornton and the rest of the team to make improvements going into the 2009-10 season.

Many wondered if Biedrins could be the Warriors’ future center for years to come. Despite the Warriors putrid start, Biedrins appears to be justifying his six-year $63 million contract extension by putting up career numbers.

Last season, Biedrins averaged nearly a double-double at 10.5 ppg and 9.8 rpg, and provided energy on both ends of the floor. His biggest flaws, however, were his poor free throw shooting, few post moves, and lacked the ability to finish with the right hand. This season, however, he has shown some major improvements. Although he still needs work on free throws, he has developed more moves in the post and is better able to finish with his right hand.

The improvement in his game has led to career highs points (14.9), rebounding (11.9, second in NBA), and blocks (1.5). At only 22-years old, the Warriors will expect to see greater things from Biedrins in the future.

The Kings are far past their powerhouse team beginning a decade ago that started several deep and memorable runs into the playoffs. The Kings have become a lottery team and have struggled to develop young players.

The Kings are once again headed to the lottery, but not without seeing the improvement of John Salmons. Salmons in the starting role has vaulted himself as the second leading scorer on the team, increasing his scoring average, from 12.5 ppg a year ago, to 19.3 ppg this season. He is also shooting 50 percent from the field, an impressive number for a guard-forward. He is also chipping in a three per game, making 42% percent of those attempts, and also getting to the line 4.5 times a game.

Although they are already out of playoff attention, the Kings have young talent to work with, and Salmons will be a large part of the team’s development.

When Carlos Boozer was placed on the injured list on November 21, the Jazz needed someone to step up in the post. Fortunately, they had a young strong back up in Paul Millsap, and he has filled the starting role admirably.

While the Jazz are hoping to get Boozer back soon, Millsap’s physical style of play is getting the job done on both ends of the floor. In the past eight games, he is averaging over 18 ppg while shooting 56 percent, and is grabbing almost 12 rpg. His also provides a physical defensive presence as well, something that is still lacking in Boozer’s defense. In the same span, Millsap is averaging 1.6 steals and one block a game, compared to Boozer’s averages of 0.9 and 0.3, respectively.

While Boozer’s return will surely send Millsap back to the bench, the Jazz are fortunate to have another star big man in their future, if they can keep him.

David Lee has always provided consistency in points and rebounding. David Lee as a starter has provided him the opportunity to become a star in New York.

Lee has always been a solid contributor, providing a double-double nearly every night. Since Zach Randolph was traded to the Clippers, Lee has been on a tear and put up some incredible numbers. Over the past nine games, Lee has averaged 18.1 ppg on 65 percent shooting, while also grabbing 14.5 rebounds (second behind Dwight Howard in that span). Against the Warriors, he exploded for 37 points, 21 rebounds, and three steals.

David Lee could be a fan favorite in New York, especially if the Knicks can make the playoffs. But that love may only last until 2010.

After missing the entire 2005-06 season, and 84 games over the past two seasons due to injury, Nene Hilario finally appears completely healthy, and is showing how good he really can be.

Nene is a major factor for the Nuggets surge this season. The main reason is because he is the most efficient big man in the NBA. He is averaging a career high 15.1 ppg, and chipping in 7.1 rpg, but those aren’t his more impressive numbers. He is making 63.3 percent of his field goals, tops in the NBA, while also making 75.6 percent of his free throws. His great improvement is his shooting ability, which allows him to take the mid-range shot or drive to the basket. He provides a strong defensive presence as well, adding 1.6 bpg and averaging 1.5 steals.

With the addition of Chauncey Billups, the Denver Nuggets have a new defensive identity, but will it be enough to finally carry them past the first round of the playoffs?

Granger was in my last season’s Most Improved article, and I am so impressed with his game that I am sticking him in this article too. He was on my last year’s fantasy team that won me a championship, and I picked him again this year and he has led my team into the top two spots (Yahoo! 12 team H2H).

In only his fourth season, Granger is already deserving of an All-Star spot. He has improved almost every facet of his game every year, and emerging as a true super star. Although Granger has struggled in his past few games, he is still averaging a career-best 23.1 ppg, good for seventh in the NBA, while hitting a respectable 44.6 percent of his shots.

He is also hitting 2.6 threes per game at a 37-percent rate. while also providing defense, blocking 1.6 shots, and getting one takeaway a game. The scary thing for this guy is that he is only going to get better. Listed as a 6’ 9” guard-forward, he is a nightmare to match up with because he can get his shot off at will.

He still needs to improve on parts of his game, such as driving to the basket more and getting to the foul line more often, something Dirk Nowitzki does extremely well. But this guy is still a stud and Indiana could be seeing something very special emerging in the near future.

In only his third season, Rajon Rondo is already emerging as one of the better point, and if he continues to improve, he could soon be one of the best point guards in the NBA.

Fresh off the Celtics’ championship year, Rondo has taken his game to another level, and is making life easier for the “Big Three.” He is averaging career highs in assists (7.6), rebounds (4.9), steals (2.3), and is shooting 52.4 percent from the field, an astonishing number for a point guard. During the Celtics’ 12-game winning streak, he is averaging 12.5 ppg, 8.5 apg, 6.0 rpg, and 2.4 spg, while shooting 57 percent from the field. He is looking very comfortable in the Celtics’ offense, pushing the ball at every opportunity and finding the open player.

The Celtics look as dominant as ever, and if Rondo continues to play at this level, there’s no reason to doubt that we will see another green banner in June.

Most figure the Nets to be in rebuilding mode after a dismal last season and trading away Richard Jefferson and Jason Kidd. Thankfully for the Nets, Devin Harris didn’t get that memo, which could result a return to the playoffs much sooner than expected.

The Dallas Mavericks traded away two first-round draft picks, paid $11 million, and traded Devin Harris to obtain Jason Kidd in the hopes he will bring Dallas a championship. I would think most Dallas fans are groaning at the decision (I know I am), especially with every big game Harris puts up. This year Harris is putting up spectacular numbers, thanks to a vastly improved mid-range jumpshot, and extra freedom provided by Nets coach Lawrence Frank.

So far, Harris is averaging 24.4 ppg, which is sixth in the NBA. Equally impressive is that he is hitting 48.5 percent of his shots on midrange jumpshots and frequent drives to the basket.

He is also first in FTM (9.2) and second in FTA (11.2), while also dishing out a career high 6.1 assists and averaging 1.4 steals. Harris also makes terrific decisions and takes care of the ball, averaging only 2.2 turnovers per game. More importantly, he has replaced Vince Carter as the leader of the team, and it has been evident in several games this year.

Harris has broken 30 points in six games this season, including a 47-point outburst against the Suns and 38-point performance against the Pistons, both resulting in victories. In fact, whenever he does break the 30-point mark, the Nets are 6-0. They are 11-5 when Harris plays and 0-3 when he does not.

Harris will be selected as an All-Star, is the frontrunner for the Most Improved Player Award, and could be a possible MVP candidate. More importantly, if the Harris can keep up the same level of play, the Nets could be seeing the playoffs for many seasons to come.

EDIT (Deserving mentions): Here are names and brief summary of players that I omitted and overlooked, but definitely should be on this list.

I completely overlooked his guy since the return of Brad Miller. But even though Hawes has been sent to the bench, his production has not gone down, and  he could be the Kings future PF-C. He is posting 12.4 ppg on 48.9-percent shooting, while grabbing 7.3 rebounds and blocking 1.8 shots. He is also chipping in about one three per game.

Duhon is finally putting together a great season, and is looking a lot like Steve Nash under D'Antoni's system. He is averaging 12.1 ppg, dishing out 8.3 apg (good for third in the NBA), hitting 1.6 threes and  85.7-percent of his FTA, while also averaging 1.2 spg. His only blemish is his low FG-percentage, but he has been picking up the slack since losing Zach Randolph and Jamal Crawford, including a 22-assist effort against the Warriors.

Ariza has been the Lakers' best guy off the bench, providing instant energy and defense. His play has led to career-highs in points and rebounds, but also provides excellent perimeter defense, and is averaging two steals per game. He will be the go-to defensive guy to guard the opposing stars.

Joe Harris on Re-Signing: ‘Definitely, Why Wouldn’t You?’ 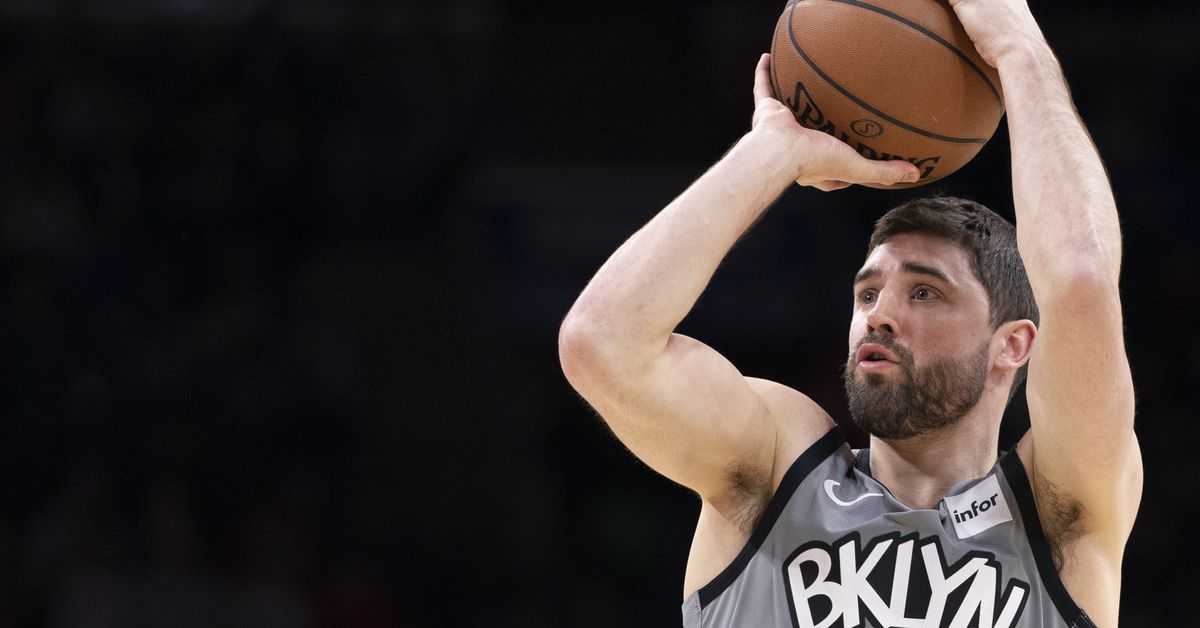 Joe Harris on Re-Signing: ‘Definitely, Why Wouldn’t You?’