Theo Epstein has been given permission to discuss the vacant general manager slot in the Chicago Cubs organization.

This doesn't mean he's leaving. He might chat with the Cubs and decide that it's not an ideal situation for him to step into. In addition, there is still one year remaining on Theo's contract with the Red Sox. In order for him to sign with the Cubs the Red Sox would need to be compensated. What that compensation would be is a very important question. Would it be money? Would it be players? An existing major leaguer or a prospect? Theo is just about the highest profile general manager in all of major league baseball.

That doesn't mean he's the best general manager but it does increase his value, and for a Cubs franchise seeking to turn around a tradition of losing in the nation's third biggest market behind New York and Los Angeles, he would be a huge step toward changing the Cubs "lovable loser" image.

That's probably not the case though. Regardless of one's opinion of Red Sox ownership it would be very tough to deny that they are a competitive and savvy ownership group. Like all people they are not infallible and so mistakes have and will continue to be made. An Epstein departure would not necessarily be a massive mistake or a fatal blow to future championship prospects. 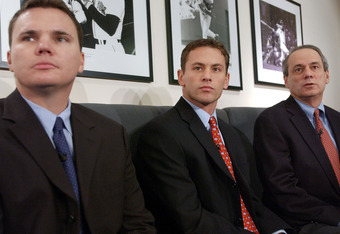 Terry Francona's departure only becomes a distaste for the franchise if the replacement is a failure. The Los Angeles Lakers had a collection of both established and future superstars when they won the 1980 NBA Finals. Following a disappointing 1980-81 season, the Lakers fired head coach Paul Westhead. This was a controversial move at the time, but the replacement, Pat Riley, proved to be exactly what the team needed, and the "Showtime" dynasty was born.

Following the 2007 season the New York Yankees parted ways with manager Joe Torre. Torre had led the Yankees to six World Series appearances and four World Championships. That's about as impressive a legacy as anyone could have ever expected of the manager. Yet the Yankees felt he had lost his effectiveness and chose to let him go and hire Joe Girardi. The 2008 Yankees were a work in progress. The 2009 Yankees were world champs.

Perhaps Epstein's departure will clear a path for not just a replacement but an upgrade at the general manager position? If there is an upgrade to be made, who are some names that fans should be on the lookout for?

The first name that jumps to mind is Ben Cherington. Cherington, who currently serves as Vice-President Of Player Personnel for the Red Sox, was briefly the co-general manager back in the off season following the 2005 season. Under his watch the Red Sox made a trade with the Florida Marlins in which top prospect Hanley Ramirez and pitcher Anibal Sanchez were sent to the Marlins for Josh Beckett, Mike Lowell, and Guillermo Mota. That deal was the catalyst for the 2007 World Series Title. 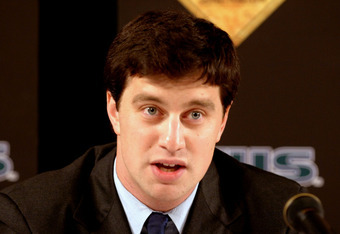 Cherington, who graduated from Amherst College in Western Massachusetts, has been in the Red Sox organization since the 1997 season when he was brought on board by former GM and fellow Amherst grad Dan Duquette.

A Cherington hire would be one that would seek to bring a known commodity into the fold. The top Sox brass, John Henry, Larry Lucchino, and Tom Werner all know Cherington, and his promotion to general manager would be unlikely to rock the Red Sox boat too dramatically.

If the Cubs were able to pry away Theo from Boston then perhaps Boston would look to pry another existing general manager away from a rival franchise?

Andrew Friedman would have to top that list. One of baseball's youngest GMs, Friedman is known for producing exactly what the Red Sox seem to be lacking. Consistent, durable, and young starting pitching. While highly touted Red Sox prospects like Clay Buchholz and Jon Lester have been injured or inconsistent the Rays rotations of homegrown talent is a who's who of starters who are the envy of every major league franchise.

David Price was a number one overall pick, and the Red Sox success means they won't have one of those anytime in the near future but Wade Davis (third round 2004 draft) , Jeremy Hellickson (fourth round of 2005 draft)  and Matt Moore  (eighth round 2007 draft) were all mid round steals that Friedman mined out of the MLB Draft. Those types of finds would serve a Red Sox team that has struggled with consistent pitching quite well down the road. 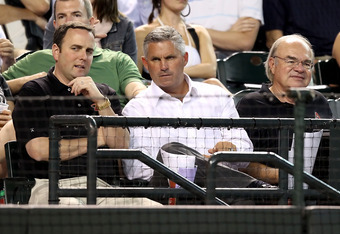 When Theo was away from the front office in the winter of 2005-06 Cherington was among two men primarily responsible for handling general manager duties. The other is current San Diego Padres GM Jed Hoyer.

Hoyer who worked for the Red Sox's current ownership group from 2002 until 2009 would also represent a young and familiar face in the same vein as Cherington. Hoyer however would bring with him more actual GM experience. He'd also likely cost a bit since he's currently under contract in San Diego until the conclusion of the 2013 season, and has a 2014 option.

The Red Sox could also look to bring in someone slightly older and with a variety of big league experience. Should they look in that direction then current Arizona General Manager Kevin Towers could be a man the Sox might want to look to.

Towers, who is in the midst of a two-year contract in Arizona, has brought immediate and dramatic results in the desert. The Diamondbacks who were among baseball's worst teams in 2010 are currently playing in the NLDS against the Milwaukee Brewers. They won the National League West with relative ease, never letting up against the likes of Defending World Series Champs the San Francisco Giants.

Towers has general-managed the Padres as well as the Diamondbacks and has been in executive positions since 1995.

The Red Sox fans, players and ownership are all waiting now to see what happens with regard to Theo Epstein. Stay or go the Red Sox ownership is about to enter a very important off season, and the franchise's future success—or failures—are likely to be determined behind the scenes in the next few weeks.