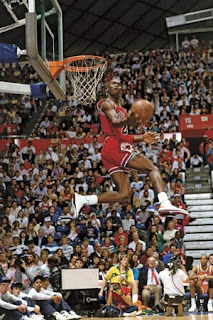 So to start out the basketball edition, I'm starting out with my favorite team and favorite all-time player. Today, we look back Michael Jordan's 1988-89 season. I'm using the default scoring for Sporting News and Yahoo! fantasy basketball games. So here's the scoring system for each:

Note: For those that are not familiar with basketball, triple-double means reaching double digits in at least three of the following categories: points, rebounds, assists, steals, and blocked shots.

It can be argued that Jordan had his best statistical all-around season in 1988-89 after leading the league in scoring again, and setting season-highs in rebounding and assists. Jordan's 15 triple-doubles on the season was also a season high for him.

He didn't record his first triple-double until January 3 which was the team's 28th game of the year. After missing a game against the Boston Celtics because of a groin injury, Jordan had one of his best periods of play not long after.

In the NBA playoffs, Jordan helped lead the Chicago Bulls to Eastern Conference Finals. It was in the opening round against the Cleveland Cavaliers that Jordan hit the famous jump shot over Craig Ehlo in the clinching Game 5 win.

In the next round, Jordan had a triple-double in the opening game against the New York Knicks, and the Bulls eventually won the series 4-2. Chicago advanced to play the Detroit Pistons in the Eastern Conference Finals. The Bulls actually held a 2-1 series lead against Detroit, but proceeded to lose the final three as the Pistons went on to win the NBA Title. Jordan averaged 34.8 points, 7.0 rebounds, and 7.6 assists per game in the playoffs.

If anyone wants to suggest a past player, you may do so by commenting. I only ask that we try to keep it before 1995. Also, statistics are tougher to find in the early era of the game because they weren't tracked as well. Just something to keep in mind.

Thanks for viewing, and be sure to check the Blog List of friends to the right of this page for more great reads!