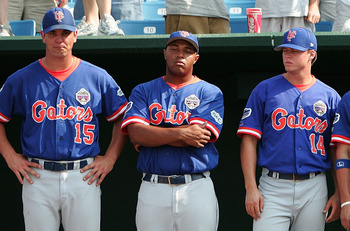 One of the teams competing in this weekend's Gainesville Super Regional was supposed to be there. The other barely made it into the field at all.

Florida, of course, was the team that was expected to make it this far. One of the better teams in the nation all season long, Florida continued its dominance with a clean sweep through the Gainesville regional this past weekend.

Let's compare the two clubs and take a look at what to expect come this weekend.

Florida pounded the ball during the regular season and continued that dominance at the plate during last weekend's regional. The Gators scored 33 total runs in their three wins over Manhattan and Miami (twice).

As a team, they have a .311 batting average. Individually, Mike Zunino leads the Gators in average at .371 and in home runs with 16. Preston Tucker had a huge weekend in the regional, driving in 11 runs. He leads the team in RBI with 65.

Best of all for Florida, they get contributions up and down their entire lineup. They have seven regulars hitting over .300.

The Bulldogs of Mississippi State had quite a bit more trouble offensively. They hit .282 as a team and only have three regulars hitting over .300.

They have been hotter as of late, though. They scored 18 runs in their three wins this past weekend, including seven runs in a championship game win over top seed Georgia Tech.

Jarrod Parks is their top offensive performer and really makes their offense go. He leads the team in average at .365, on base percentage at .513 and is tied for the team lead in RBI at 36. Nick Vickerson provides much of the power as he leads the Bulldogs in doubles with 16 and slugging percentage at .539. He was second on the team in homers with seven, trailing only Jonathan Ogden who hit eight.

Florida's dominance doesn't end at the plate. They also boast one of the more talented pitching staffs in the nation.

Dual aces Karsten Whitson and Hudson Randall were solid all year with 2.42 and 2.38 ERAs, respectively. They continued their run of good outings in the regional round in victories over Manhattan and Miami.

Brian Johnson missed the regionals after being knocked out by an errant throw from catcher Mike Zunino in the SEC tournament and he is expected to miss the Super Regionals as well. Alex Panteliodis will step into his starting role. He got the win in the regional final game against Miami and might be asked to do something similar if this Super Regional goes to a deciding third game.

Nick Maronde, Greg Larson, Tommy Toledo and Steven Rodriguez are all solid bullpen arms. Closer Austin Maddox was injured while playing first base in the regionals, but there is hope that he will be back for this weekend.

Just like on offense, Mississippi State doesn't have the depth that Florida does on the mound. They do have some solid arms, particularly in the bullpen. Caleb Reed, Darryl Norris and Taylor Stark sports ERAs of 1.40, 2.49 and 3.12, respectively.

The Bulldogs don't have a true ace in the starting rotation, but they pieced it together well in the Atlanta regional. Luis Pollerena, after only starting three games all season, pitched six shutout innings on the way to beating Southern Miss. Evan Mitchell (6-1, 3.47 ERA) will also be looked to for a start against the Gators.

Both teams field the ball well.

Mississippi State has an almost indentical .973 fielding percentage as a team. Like Florida, their catcher, Wes Thigpen, is good defensively. He only has three errors on the season.

The downfall of the Bulldogs' defense is the play of their shortstop, Jonathan Ogden. He leads the team in errors with 18 and has an alarmingly low .922 fielding percentage. For this reason, I give the edge to Florida. Shortstop is the most difficult position on the field, and as such, you need someone who is rock steady over there.

Kevin O'Sullivan is on the way to leading the Gators back to Omaha, trying to do what they couldn't last season: win a national championship.

O'Sullivan has his players peaking at the right time. The offense, pitching and defense are all clicking and the team seems to be having a ton of fun on the field.

Mississippi State is trying to get back to Omaha for the first time since 2007. John Cohen did a great job as coach of Kentucky and has continued his success at Mississippi State, but he has yet to get a team over the hump and into the College World Series.

The Bulldogs have momentum on their side. After just barely getting into the field, they have rattled off three straight wins over three different teams in Atlanta. They will need to keep that momentum up and then some to have success against Florida.