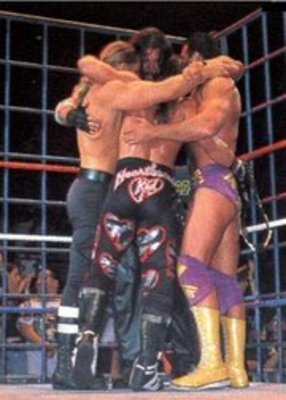 As wrestling fans, we hear plenty of terms when patrolling the IWC, and one of those terms is "kayfabe."

But exactly what does it mean?

Well, according to Wikipedia, kayfabe is "the portrayal of events within the industry as 'real.' That is, the portrayal of professional wrestling as being genuine or not worked."

Someone like Kane plays a role. He is kayfabe "The Big Red Machine," but in actuality, he is Glen Jacobs.

So, an example of someone breaking kayfabe would be John Cena calling Kane "Glen."

Of course, there have been numerous instances when a wrestler or group of wrestlers breaks kayfabe, which is essentially like an actor breaking character.

But what are the worst kayfabe-breaking moments in WWE (and WCW) history? Let's take a look.

I'm honestly not sure if this is more breaking kayfabe, or just flat-out hilarious.

Mean Gene Okerlund was just about to interview Rick Rude and Bobby Heenan when the SummerSlam logo behind them came crashing down and scared the you know what out of Mean Gene.

Mean Gene: I know you're scared, but you've got a pretty big audience watching you!

Look, I don't know if this is technically an instance of breaking kayfabe, but Mark Henry definitely does something wrong here and most certainly goes off script.

He's supposed to be chasing the members of the Nexus, but he somehow winds up in front of them.

Really? How does that happen?

Anyway, I'm going to consider this "breaking kayfabe" because Heath Slater pushes Henry out of the way as a way of saying, "dude, what the hell are you doing? Run behind us, you moron."

And, for that, I would like to thank Mr. Slater and Mr. Henry.

There are some words you just can't say on TV. The "N-word" is one of them.

But that's exactly what Booker T said when cutting a promo during a feud with Hulk Hogan.

And once Booker realizes what he said, his reaction is absolutely priceless. He immediately drops his hands to his face, briefly smiles and then turns his back to the camera.

Can you dig it, sucka?

This clip is just one giant clusterf**k.

In a 46-second span, Vader laughs when he flubs one of his lines; Sunny looks like she wants to laugh as well; and then Road Warrior Hawk inadvertently walks in on the interview and realizes what he's done.

The look on Hawk's face is hysterical, as he breaks kayfabe rather than trying to cover it up.

In late 2009, Randy Orton and Kofi Kingston were in the midst of a heated rivalry that many thought would elevate Kingston to permanent main event status.

That is, until—at least in the view of Orton—Kingston did something "stupid!"

During a match between the two on Raw, Kingston was out of place at the finish of the bout, and Orton apparently thought that Kingston telegraphed the ending of the match, which was Orton winning with the RKO.

After Orton hit his finishing maneuver, he yelled "stupid!" multiple times at Kingston, while also mouthing some inaudible obscenities. 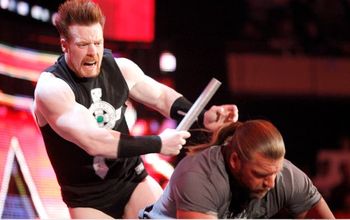 On March 28, 2010, Shawn Michaels lost a "Career vs. Streak" Match against The Undertaker at Wrestlemania 26, and the following night's episode of Raw was HBK's farewell show.

But, early on the Raw show, Triple-H was attacked by Sheamus with a steel pipe as he cut a promo before the crowd about the career of his best friend, HBK.

Still, that didn't prevent Triple-H from appearing later on the same show—showing no side effects—to embrace Michaels at the top of the entrance ramp.

I know the WWE likes to think we forget what happened in the past, but that's just ridiculous.

9. Bobby "The Brain" Heenan Freaks out

In the WCW days, there was a reason why Brian Pillman was called "the Loose Cannon."

During a match with Eddie Guerrero, Pillman was on the outside of the ring near the announce table when he saw that Guerrero was about to jump off the turnbuckle with an offensive attack.

So, Pillman abruptly grabbed Bobby Heenan—who was announcing at ringside—as a way to protect himself from Guerrero. "The Brain" didn't like that too much, and responded by saying, "what the f**k are you doing?"

He then stormed out of the arena, the match stopped and Guerrero exchanged some choice words with Pillman.

But, like a true pro, Heenan returned to call the rest of the match. Still, seeing Heenan have a major freakout on live TV was quite entertaining.

When Goldberg debuted in the WCW, he immediately went on a massive win streak in which each victory involved him hitting his signature moves on his opponents and then getting the pin.

That was all fine and dandy for most wrestlers who jobbed to him. Except Steve Regal, a.k.a. William Regal.

Regal, who is regarded as a very good in-ring technician, refused to job to Goldberg because he wanted to prove to WCW officials that he could outwrestle the rookie. So, he went balls to the wall in the ring, hitting Goldberg with stiff punches, going off script and refusing to take the pin as quickly as he was supposed to.

Eventually, Regal did take the pin, but his little stunt cost him his job with WCW.

Anyone else think that this was awesome? Because I sure do.

At the 2004 Tough Enough Challenge, Kurt Angle issued the "who wants to get in the ring with me?" challenge to the remaining contestants on the show.

His challenge was accepted by former MMA fighter Daniel Puder, who was supposed to—at least according to the script—simply fall down and let Angle beat the living crap out of him.

Well, Puder would have none of it. He chose to be Mr. Tough Guy—pun intended—, and put Angle in a submission hold instead.

In case you were wondering, Angle was indeed pissed because someone so new to the wrestling business decided to go off script. And as for Puder, he would actually go on to win the competition, though he'd never make it very far in the WWE.

In March 1996—just three days before Wrestlemania XIV—Shawn Michaels and the rest of D-Generation X were in the ring at Wrestlemania weekend, and HBK was cutting a promo in front of the live crowd.

Then, some idiot threw a battery at Michaels, which hit him square in the noggin. HBK was none too pleased.

He immediately left the ring and headed backstage, where he stayed for more than five minutes as he argued with Vince McMahon over his behavior. Remember, this is the HBK that no one really liked—the brash, cocky star—not the man he would later become.

Anyway, Michaels eventually calmed down, made his way back to the ring, and the rest is history.

At Bash at the Beach in 2000, WCW was on its last legs and Jeff Jarrett and Hulk Hogan were feuding over the WCW World Heavyweight Championship.

Well, as it turns out, Hogan wanted to hold the strap, but Jarrett had no interest in jobbing to Hogan. So, Hogan decided to go to the head of WCW's creative department, Vince Russo.

The following mess is what happened as a result.

And we really wonder why WCW died?

OK, I know that this match technically isn't from the WWF/E or WCW. But Antonio Inoki is a member of the WWE Hall of Fame, so I'm including it here anyway.

Plus, the dude goes nuts against The Great Antonio in this match.

Apparently, The Great Antonio tried to turn this match from a work to a shoot, but Inoki was the one who actually accomplished that. He just wails on Great Antonio with soccer kicks that make Randy Orton's "punt" look like they come from a third-grader.

I don't care what anyone else says, those kicks were legit. 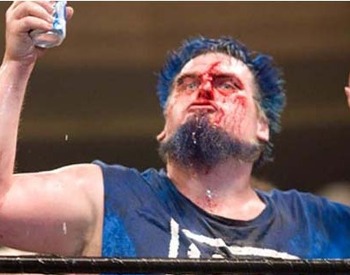 At ECW's One Night Stand in 2005, the show concluded with Stone Cold Steve Austin inviting all the wrestlers who were backstage into the ring for a frosty one, and then subsequently suggesting they have a giant brawl.

Well, they did. Especially JBL.

JBL—who had developed a reputation as a backstage bully—targeted the Blue Meanie from the get-go, because the two had already had some issues with each other.

Apparently, JBL decided it would be a good idea to break character, legitimately attack a co-worker and bust him up pretty badly.

Good for you, JBL. It takes plenty of guts—OK, maybe stupidity—to do that. 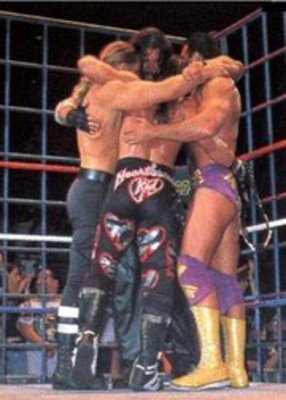 In 1996, Kevin Nash (Diesel) and Scott Hall (Razor Ramon) were on their way out of the WWE and headed for the company's rival promotion, WCW.

But before Nash and Hall bolted, Nash had one last match at a WWE live event against longtime friend Shawn Michaels. At the time, HBK and Hall were faces while Nash and Triple-H were heels.

Perhaps most importantly, though, Hall, Nash, Michaels and Triple H were all known as "The Kliq," a group with an incredible amount of backstage influence in the then-WWF.

So, after the match between Nash and Michaels, Hall and HBK, the two faces, embraced in the middle of the ring.

No big deal, right? Not until Triple-H and Nash joined in, and two heels and two faces hugged it out in front of a packed crowd at Madison Square Garden, making everyone wonder what on Earth they just witnessed.

After all, bad guys aren't supposed to be friends with the good guys. 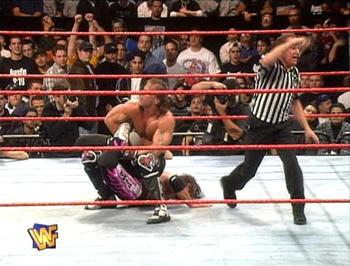 Who hasn't heard about the Montreal Screwjob by now?

The basic gist goes something like this: Bret Hart was the WWF Champion, but the higher powers in the company knew that he was leaving for WCW. Vince McMahon did not want Hart to pull an Alundra Blaze—a.k.a. taking a WWF title to WCW and throwing it in the trash on Nitro—so he decided to screw Hart over, without him knowing it.

At Survivor Series, a match was scheduled between Hart and Shawn Michaels, and only Vince, Michaels and referee Earl Hebner knew that Hart was going to lose his title defense via his own finisher, the Sharpshooter, on Canadian soil.

At the end of match, Michaels locked in the submission on Hart, and Hebner called for the bell even though Hart clearly never tapped out.

An infuriated Hart then spit in Vince McMahon's face and left the WWE, not returning until 2010 when he and HBK finally buried the hatchet.