NHL Playoffs: The Most Creative Things Done with the Stanley Cup 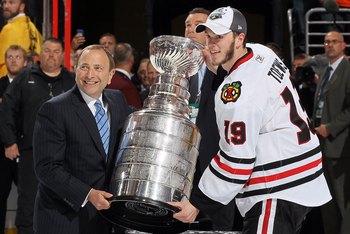 The editors at B/R suggested that someone write a little something about the plight of hockey's coveted Stanley Cup.  While the following exploits of Lord Stanley's Cup will put a smile on your face; one can't help but wonder what things this Cup has seen and had done to him that never made it's way to the press. Much like the happenings at a college frat house on a Saturday night, some stories are only told among the original culprits to protect the guilty and the innocent at the same time!

Before we get to the list, here are a few interesting facts about the Cup:

4) Thanks to the 1994 New York Rangers, the Cup was given an official escort/handler from the Hockey Hall of Fame to keep it safe beginning in 1995 (More on this later!)

Here are some of the most creative things players and coaches have done with Stanley in recent years ... 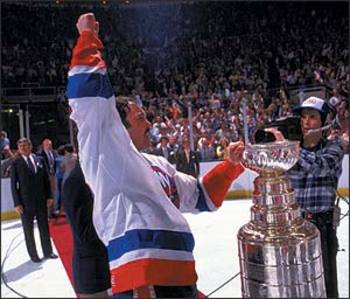 While researching for this article, there were several articles from employees of the Hockey Hall of Fame sharing their tales from escorting the Cup over the years when players had their days with the trophy. According to many of these fine folks, many players have allegedly slept with the Cup ...  Trottier is one of the few willing to openly admit it.  He wanted to wake up and have it right next to him to make sure it wasn't a dream! 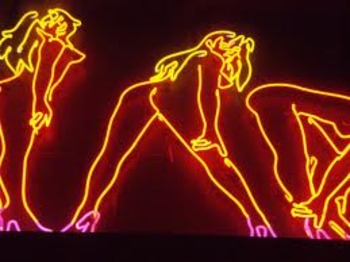 According to folklore, in 1987 under the leadership of Mark Messier, Stanley was a guest at  Mark's favorite Edmonton strip club, The Forum.  The day after winning the Cup, he and the boys took Stanley for a visit to their favorite place to unwind.  Apparently, Stanley received his first lap dance there.  Of course, there is no photographic evidence to this effect yet Messier has never denied it ...  Stanley just blushes when asked about it.

1991: The Pittsburgh Penquins and Mario Lemieux 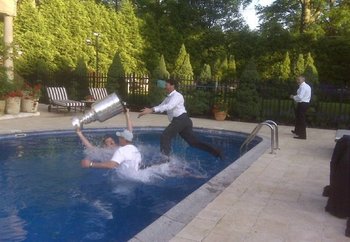 The Cup Doing the Backstroke

Per the photo, Stanley took a swim at Mario Lemieux's house when Phil Bourque accidentally fell into the pool with him.  History has, oddly, credited Lemieux with this feat yet as the evidence shows, Bourque is the one to blame.  They were surprised to find out that the Cup didn't float; someone had to fish it out of the pool later.  According to the HHoF, chlorine is not a good thing for Stanley's fair complexion either.

1993:The Montreal Canadiens and Patrick Roy 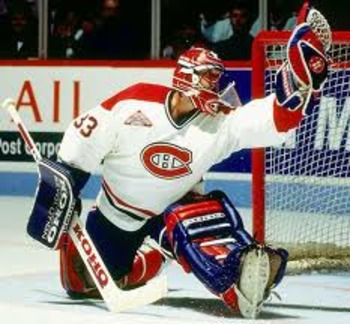 From what we can glean, the story of Stanley taking a dip at the pool at Mario Lemieux's house two years prior hadn't made it's way to the Canadiens' camp, because he took a similar bath at the home of Patrick Roy in 1993.  Unfortunately, there is no photographic evidence of the event, yet it has been retold time and time again.

This was the first year that players were given their own full day with Stanley to do as they wished. 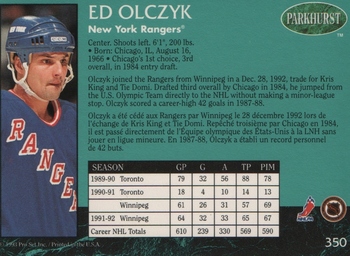 The New York Rangers had one hell of a time after beating the Vancouver Canucks in a seven-game series.  They had such a good time that starting the following year, Stanley has had to have a chaperon from the HHoF ever since.

Messier had such a good time with the Stanley in 1987 that he decided to do it again in 1994 — this time Stanley was taken to a strip club called "Scores."  I guess after seven years without seeing naked women, Messier felt he was overdue for some female attention.  What a nice guy!

The next day, a hung over Eddie Olczyk took Stanley to Belmont Race Track.  While Eddie denies this last part, it was reported that Kentucky Derby winner Go for Gin used the Cup as a feed bag.

Is it any surprise that after the Rangers, the HHoF had someone with our poor boy Stanley at all times? Sadly, handlers have said that after 1994, strip clubs were off limits. (Party poopers!) 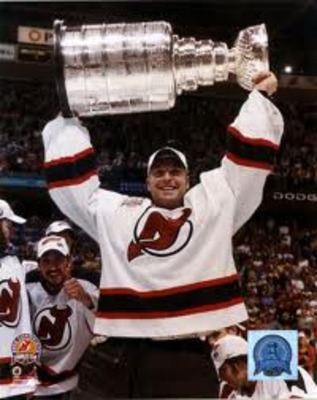 After defeating the Detroit Red Wings in the NHL's first-ever all American Cup Final, legendary goaltender Marty Brodeur decided that since strip clubs were out of the question, taking Stanley to the movies might be a good idea.  At the theater, he put popcorn in the bowl and let kids eat out of it.  That was pretty cool of him, bet the kids loved it!  I wonder what movie they saw?  Maybe The Net? 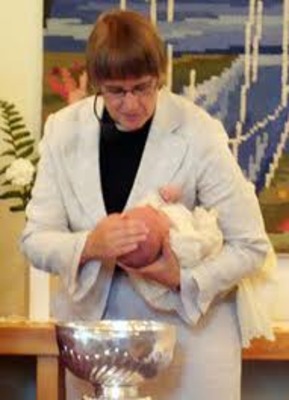 After the Avs swept the Florida Panthers in four games, Sylvain had his daughter, Jade, baptized in the Cup on his day with Lord Stanley. This was the first ever recorded baptism that Stanley oversaw.

In 2007 when the Detroit Red Wings won the Cup Tomas Holstrom, on his Cup Day, let his cousin borrow it for the baptism of his seven-week-old daughter in Sweden. 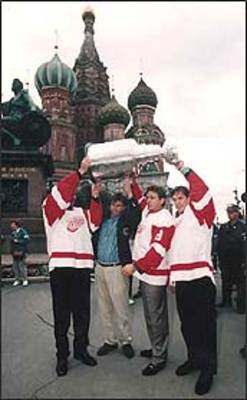 The Cup in Red Square

After sweeping the Flyers in four games to win the Cup for Detroit, Lord Stanley made his first-ever trip to Russia with HHoF curator, Phil Pritchard (You know, the guy who does the Capital One commercials with the CSR "Peggy?")

Igor Larvinov, Slava Kozlov and Viacheslav Fetisov all met Phil in Moscow to welcome Stanley to Mother Russia before each having their own day with the Cup.  Stanley must have some killer frequent flyer miles! 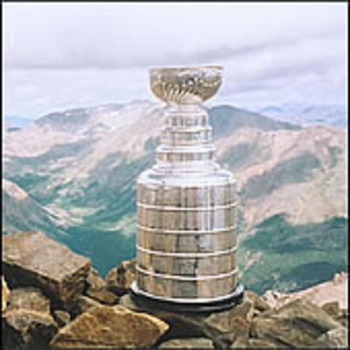 The Avs VP Mark Waggoner, an avid, mountain climber, decided that Stanley needed to see the world from a new perspective.  He, Stanley and some friends humped up Colorado's 14,000-plus feet Mr. Elbert, the second highest mountain in the US.  Stanley apparently liked the view! 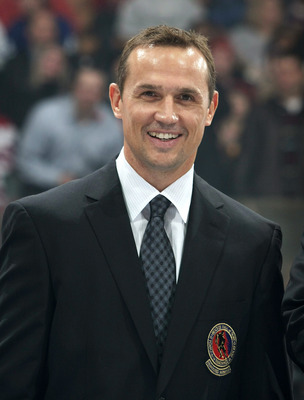 As with those who have slept with Stanley, others have even admitted to showering with it.  Based on the picture, I would say that Steve certainly showered with Stanley —they both clean up pretty good, don't they?  I wonder if they washed each others' backs too?  Hmmm ... 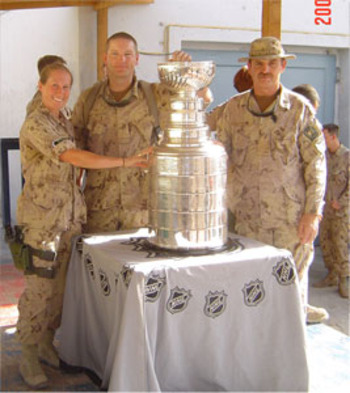 Stanley with Canadian Troops in Afghanistan

While on the ice, one can certainly find a great rivalry between the US and Canada, yet when it comes to our troops, we are all on the same side.  During 2007 and 2008 Stanley made a few trips to Afghanistan and other parts of the Middle East to have a grip and grin with the Troops.  Above, Canadian troops greet Stanley in the blistering sun.  I hope they put some sunscreen on the old boy—his fair complexion makes him very delicate. 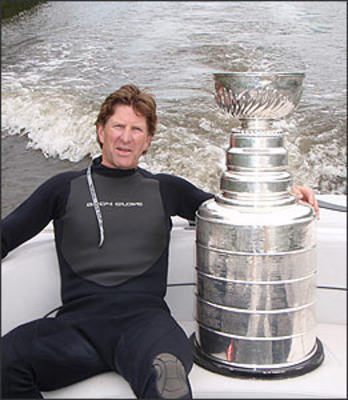 The 2008 Stanley Cup Champion coach, Mike Babcock wanted to take Stanley water skiing.  Those traveling with the Cup from the HHoF at first misunderstood, thinking that Mike wanted to take the Cup on the skis with him.  After clarification, Mike just wanted it on the boat, safe and sound, but in view while he water skied in his native Saskatchewan.

Stanley seems to often have activities that involve water, doesn't he?  They drink out of him, take him swimming, in the shower and now water skiing.  Thankfully, he is basically waterproof! 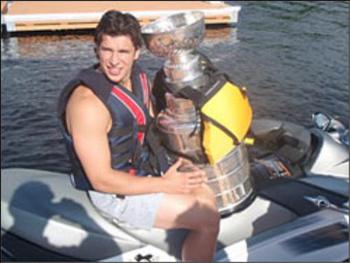 Sid certainly made the best of his day with Stanley, there are some great shots of him asleep with Stanley in bed with him.  Sid also decided to take his new buddy on the water.  Again, those from the HHoF were a bit leery of the idea and made Sid put a life jacket on Stanley, just in case.  If he did fall off, the jacket would keep him afloat long enough for someone to rescue him before he drowned. 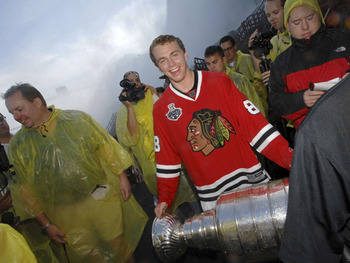 Patrick Kane decided to spend his Cup Day embracing some of the local flavor and sites of Western New York State.  Here, Kane gives Stanley a rare up-close and personal with Niagara Falls, located just a short drive from his native Buffalo.  Also, in keeping with local tradition, Stanley visited one of the Kane's favorite wing joints and Patrick and others enjoyed eating wings complete with blue cheese dressing out of the Cup. No shots of Stanley with any cabbies or in limos unfortunately. 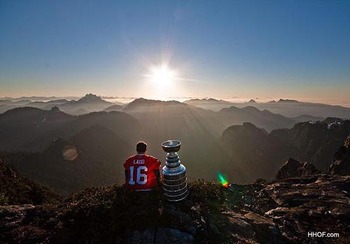 Then Blackhawk Andrew Ladd, now with the Atlanta Thrashers, poses above with Stanley, in his native British Columbia, Canada. As a Hawks fan, of all of the photos out there of players with Stanley, this one is my favorite.  I thought it would be the perfect shot to end this slideshow. Ladd had reached the proverbial pinnacle of his career and taking some time to reflect on his achievements with a breathtaking view made perfect sense.

Now, all we have to do is sit back and wait and see what creative ideas the Canucks, Sharks, Bruins or Lightning will have when their turn comes to spend the summer touring with Stanley.

What would you do if you won the Cup?