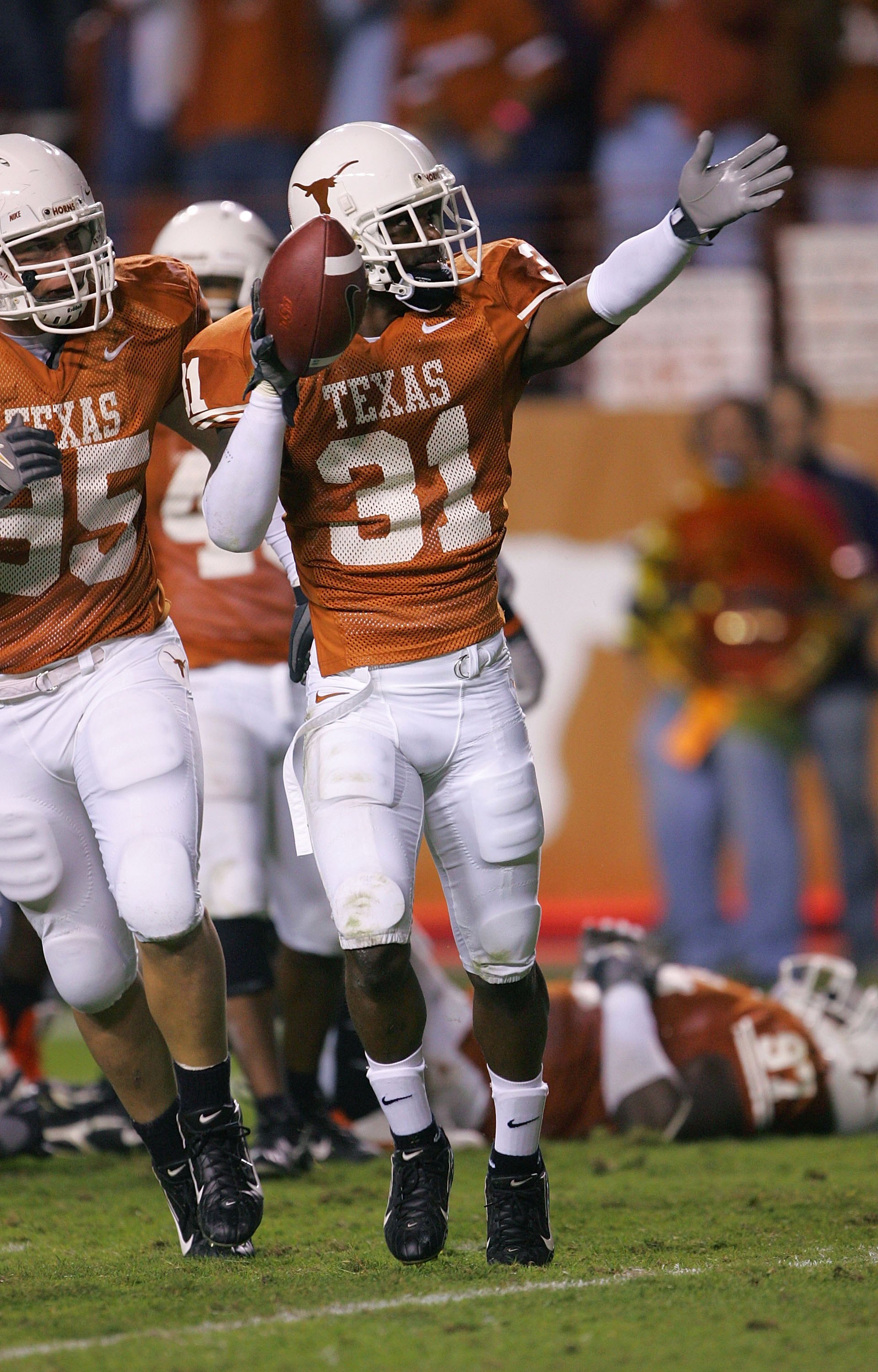 There's a reason why the Texas football program has earned the moniker "DBU" over the past 20 years. The Longhorns have seen multiple players make a huge impact in Austin, then move on to the NFL to do the same.

Even the most hardcore Longhorn fan may not recognize several of the names on our list of the top 10 defensive backs in Texas football history.

Sit back and enjoy today's installment of the Texas Top 10: The 10 Best Defensive Backs in Longhorns history! 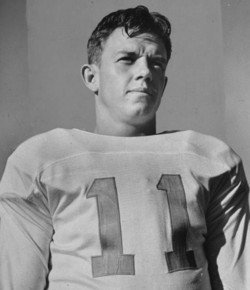 A multi-purpose star for the Texas Longhorns during the early 1940s, Temple native Noble Doss is most well-known for his "Impossible Catch" in a 1940 game against the undefeated Texas A&M Aggies, leading the Longhorns to victory.

To this day, Noble Doss is tied with another member of our Texas Top 10 in all-time career interceptions with 17. His seven interceptions in 1940 is also good for second place in Texas history.

Noble Doss lived in Austin for most of his life after a short stint in the NFL, and worked as a local insurance salesman. 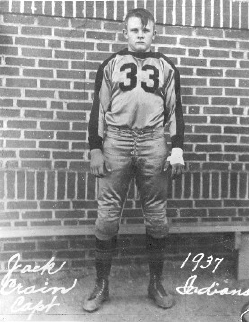 "Jackrabbit" Jack Crain, a teammate of Noble Doss during the late 1930s and early 1940s, is still a large part of the Texas football defensive record books.

Doss and Crain led the resurgence of Texas football from several struggling seasons during the 1930s.

Crain returned seven interceptions for a total of 160 yards during the 1940 season, one of the top performances in the history of Texas defensive backs.

After his career at Texas, Crain went on to serve in the U.S. Navy during World War II, and upon his return to Nocona, Texas served several terms as a member of the Texas House of Representatives.

Jack Crain passed away in October 1994. 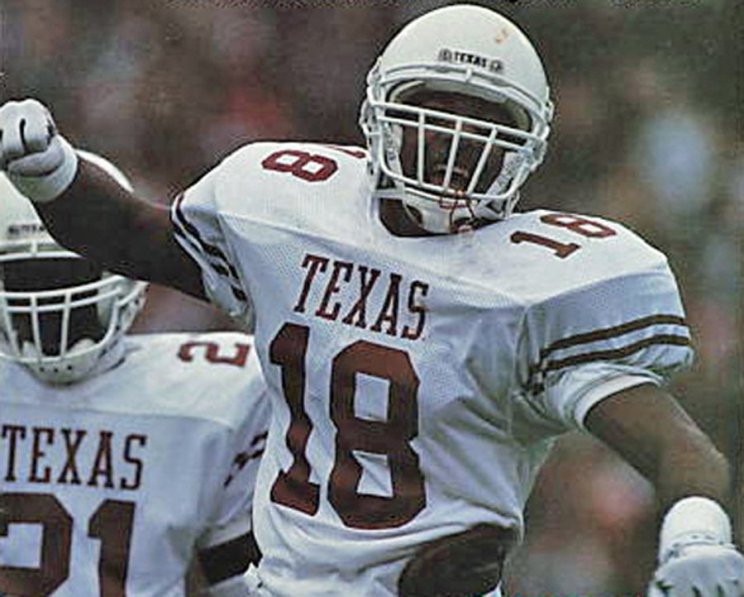 Stanley Richard was an imposing presence in the Texas Longhorns' defensive backfield. An impressive athlete with the innate ability to find the ball, Richard was one of the best defensive players of the 1980s for the Texas program.

An All-American in 1990, Richard is fifth all-time on the Texas career interceptions list with 13, sixth all-time in career pass breakups with 44 and his six interceptions in 1988 ties him with several others as second all-time.

Following his career at Texas, Richard played seven years in the NFL with the San Diego Chargers and Washington Redskins. 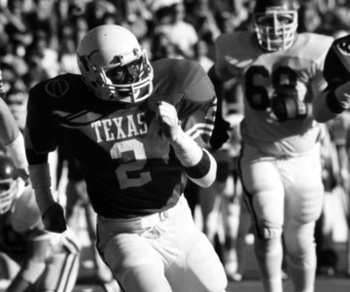 A two-time All-American at the University of Texas, Jerry Gray was one of the best defensive backs in the history of the Longhorn program.

His seven interceptions in 1984 is good for second all-time and his career total of 16 is the third-best in Texas history.

Gray went on to play seven seasons in the NFL with the Los Angeles Rams, Houston Oilers and Tampa Bay Buccaneers before starting his coaching career as an assistant with the Buffalo Bills in 1994. 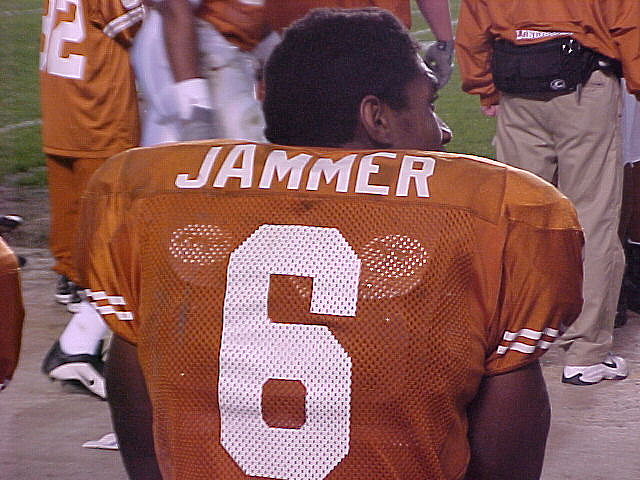 Angleton, Texas native Quentin Jammer is one of the most electrifying defensive backs Texas has ever seen.

If you needed a big play at an important time in the game, look no farther than No. 6.

Jammer was always in the right place at the right time, as evidenced by his 24 pass breakups in 2001. His 57 career pass breakups are second all-time in the Texas record books.

Quentin has enjoyed a fruitful NFL career, playing for the San Diego Chargers since the 2002 season, totalling 525 tackles and 14 interceptions. 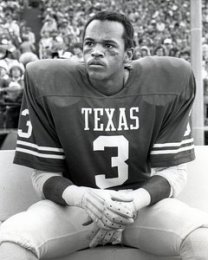 Cade's six interceptions in 1983 is one of the best single season performances of all-time as are his eleven career interceptions.

His 37 career pass breakups are also in the top seven in Longhorns history.

One of the only members of our top 10 to have a brief career in the NFL, Cade only played two seasons with the Green Bay Packers in the mid '80s, his short career ending after an arrest for sexual assault of his girlfriend led to a 15-month sentence in jail, ending his playing career.

Derrick Hatchett was the best Texas defensive back of the 1970s, making a mark in several defensive categories for the Longhorns.

Hatchett's six interceptions in 1979 and career total of 15 interceptions are both in the top five in Texas history, and his 55 career pass breakups are good for third all-time.

Hatchett played three seasons at Texas and went on to play briefly in the NFL over a three year career with the Houston Oilers and Baltimore Colts. 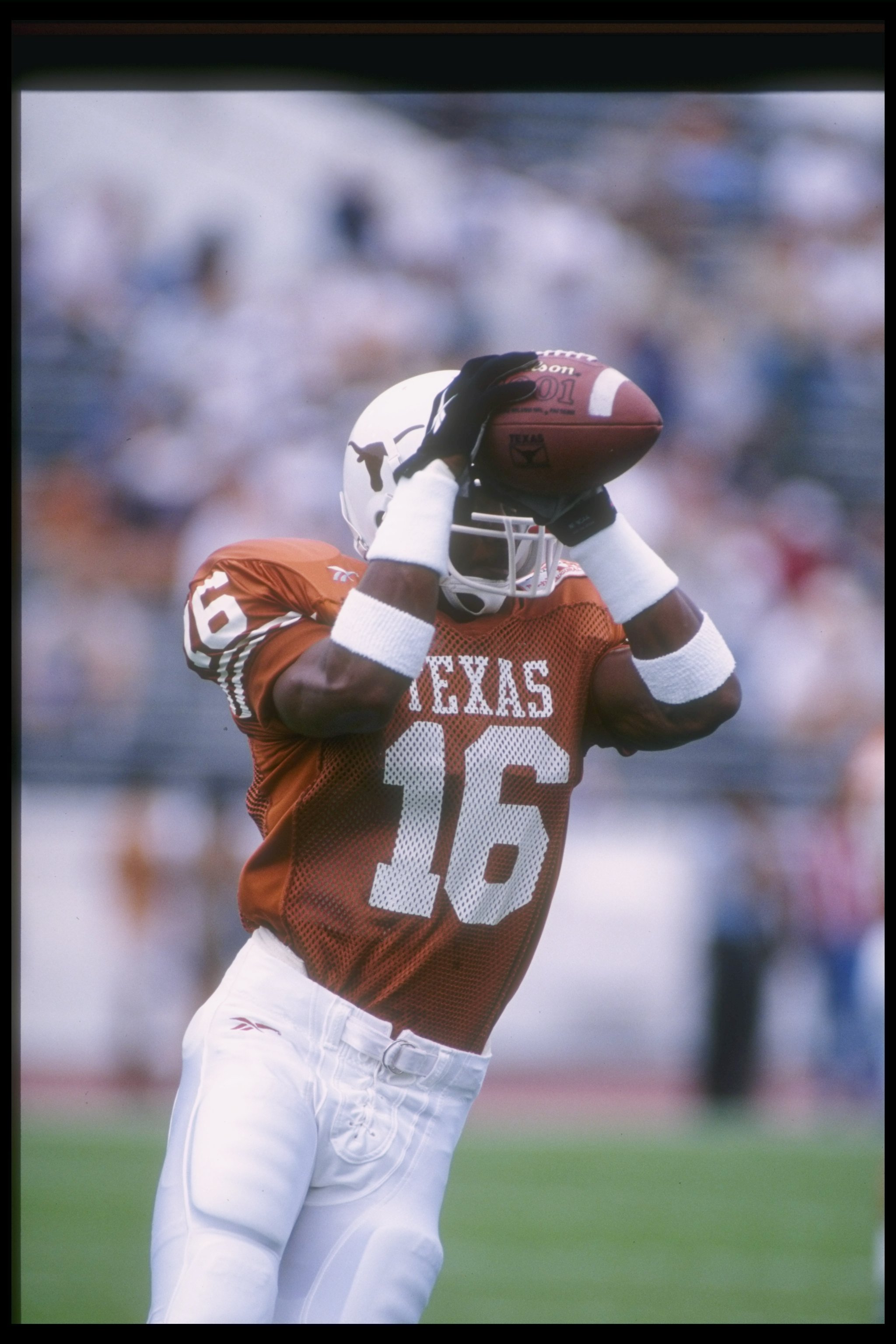 Tyler, Texas native Chris Carter has one of the most repeated names in the defensive record books for the Texas Longhorns.

Carter's marks include the following:

Carter's ability to break up passes, smother opposing receivers and make the tackle both in the backfield on blitzes and in the open field caught the eyes of NFL scouts from an early point in his career.

Carter had a complete game, second only to our No. 2 and No.1 defensive backs who are enjoying successful NFL careers today.

He played a total of five seasons in the NFL with the New England Patriots, Cincinnati Bengals and Houston Texas before retiring from football in 2002. 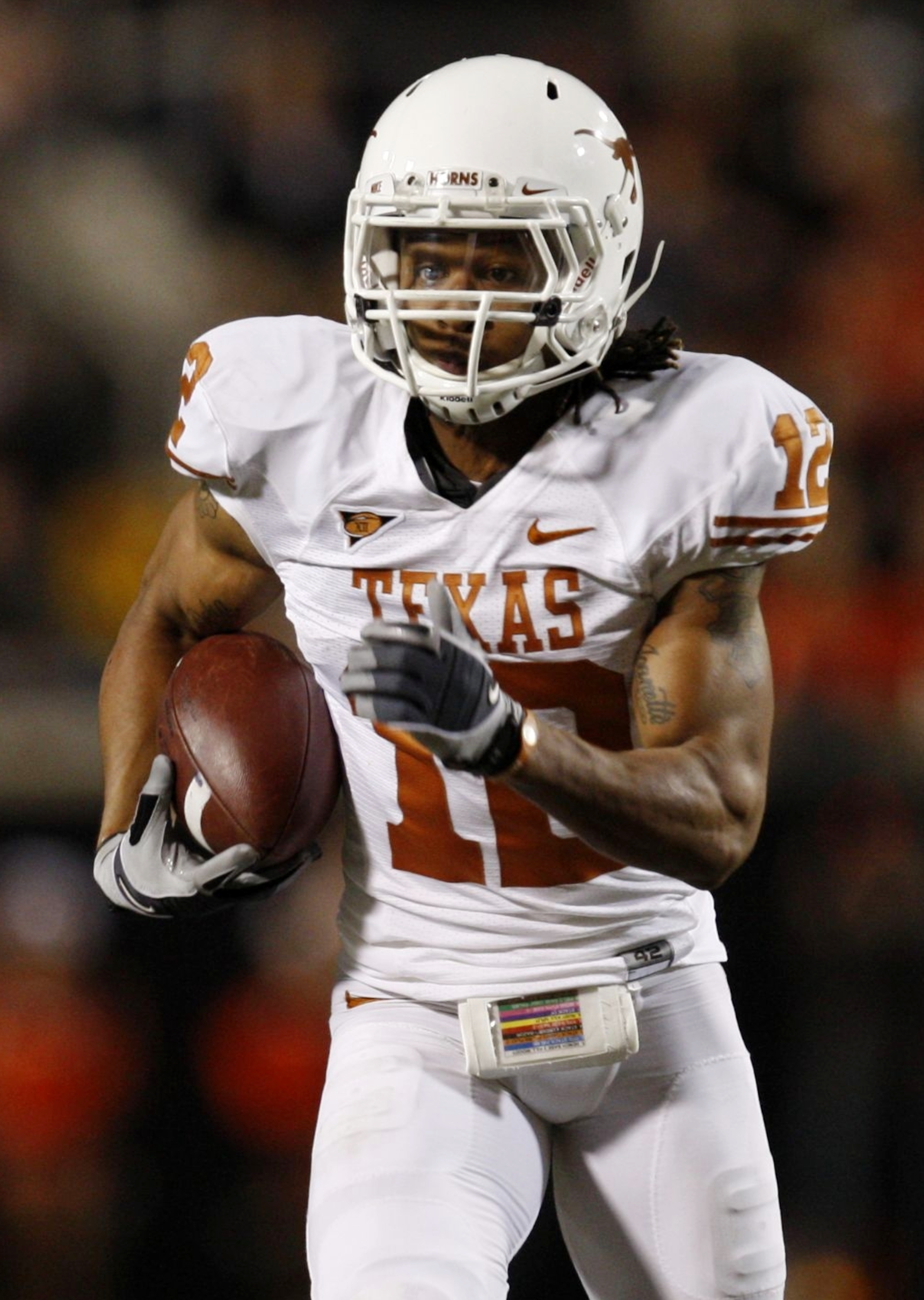 While he only played two seasons on the Forty Acres, dominant defensive back Earl Thomas certainly left his mark on the Texas football program.

Thomas' eight interceptions in 2009 (2 of which he returned for touchdowns) were almost all athletic and high flying plays.

His nose for the ball, extreme athleticism and innate ability led to his early exit from Texas as he was drafted by the NFL's Seattle Seahawks with the 14th overall pick of the 2010 NFL Draft as one of the youngest eligible players.

Earl Thomas will have a long and prosperous NFL career, and before it's done could go down as the greatest defensive back "DBU" has ever seen. 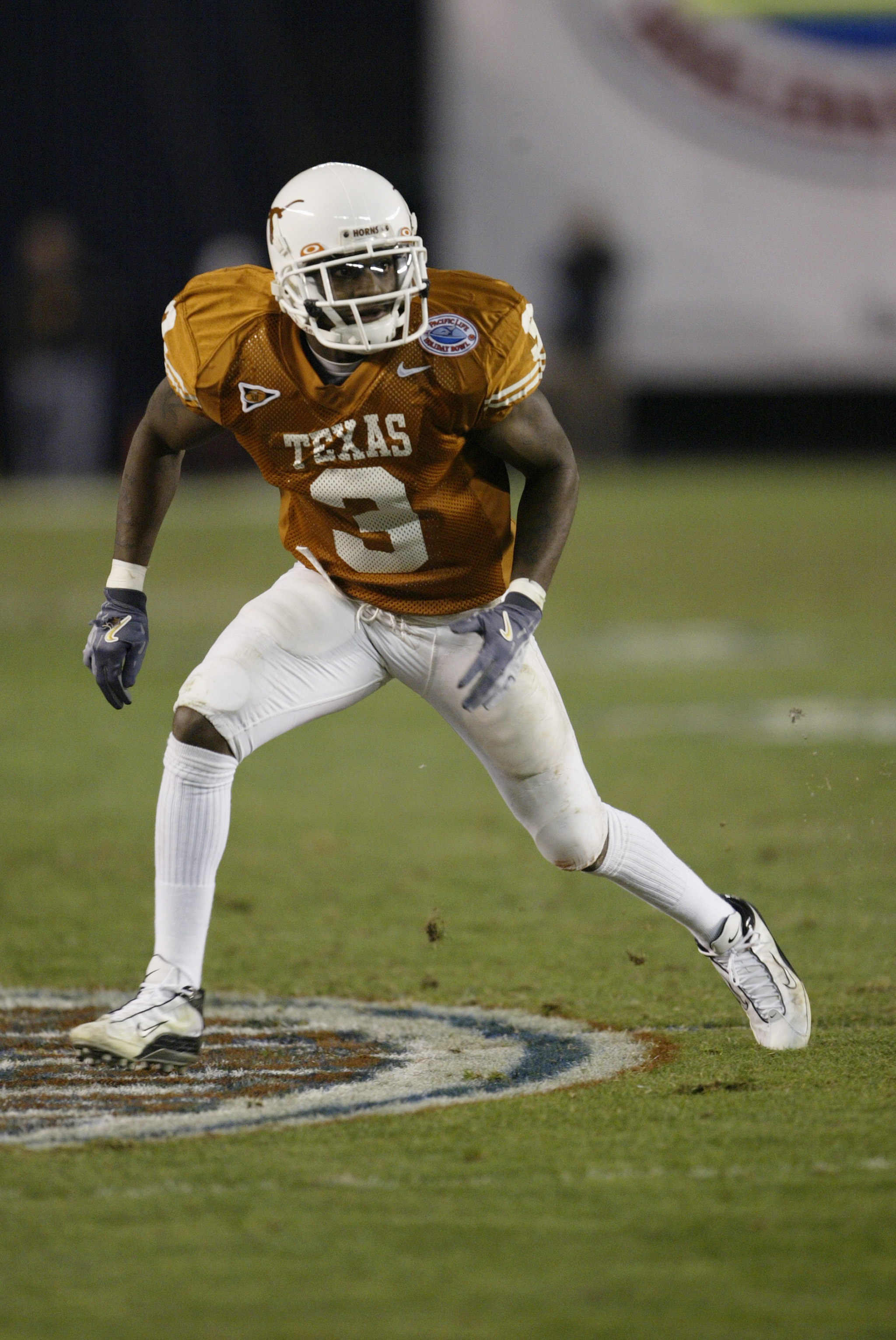 When you think Texas defensive backs, you think Nathan Vasher.

He is the unquestionable No. 1 all-time in the great tradition of secondary stars at the University of Texas.

Vasher not only was an intimidating presence in the defensive backfield for Texas but was also a feared kick and punt returner, returning kicks for a total of 1,314 yards (the all-time best), two of which were brought back for touchdowns.

His single season and career kick return yardage averages are also among the best.

Nathan Vasher is the watermark against which all other Texas defensive backs are judged and our No. 1 all-time.