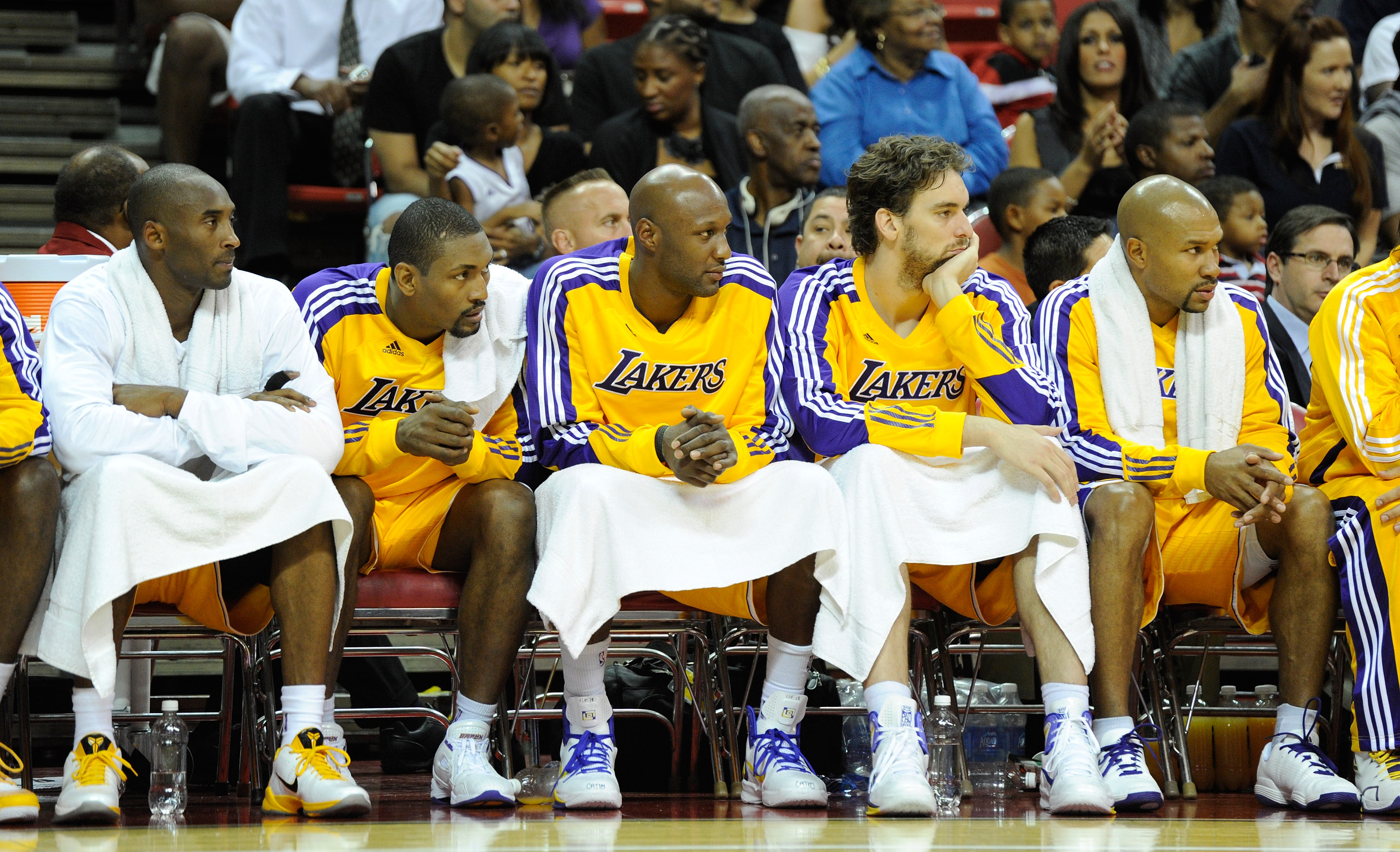 The Los Angeles Lakers are feeling the heat.

No, not the Miami Heat, but the heat the NBA's best teams feel when they aren't playing quite like they should be.

Phil Jackson's crew is currently slated as the No. 3 team in the Western Conference playoffs, but after a seven-game winning streak in January, the Lakers are barely above .500 at just 6-5.

So just what's wrong with LA? And what are the team's top concerns moving forward?

Well, let's take a look at the 10 biggest questions facing the Lakers. 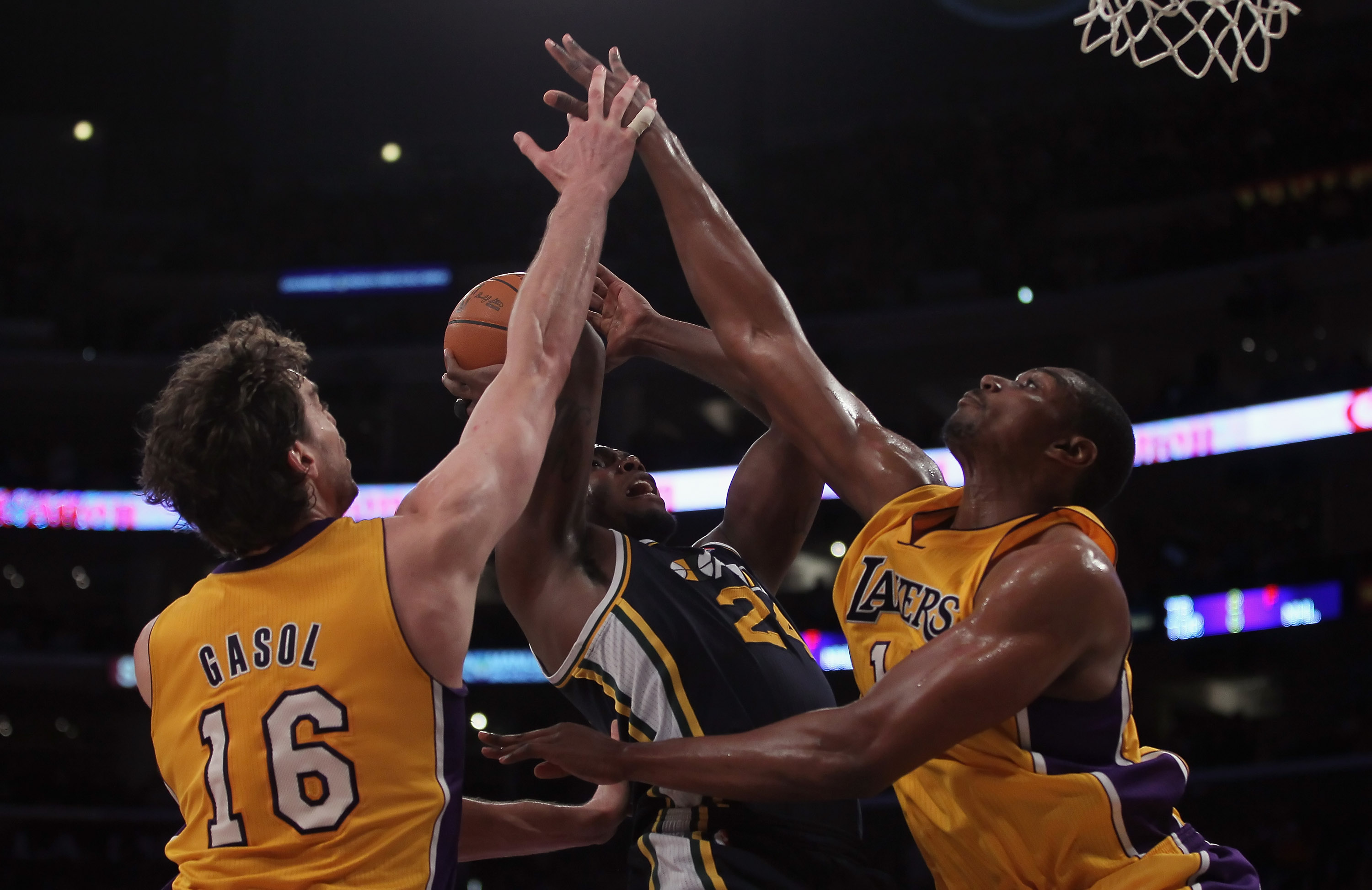 The Lakers' frontcourt is largely a three-man show with Andrew Bynum, Pau Gasol and Lamar Odom taking up the majority of the minutes at forward and center.

That's partly because of how well the "big three" play, but another injury to one of them, like Bynum, would give the Lakers some serious frontcourt issues.

9. Is Trading Andrew Bynum For Carmelo Anthony a Smart Decision? 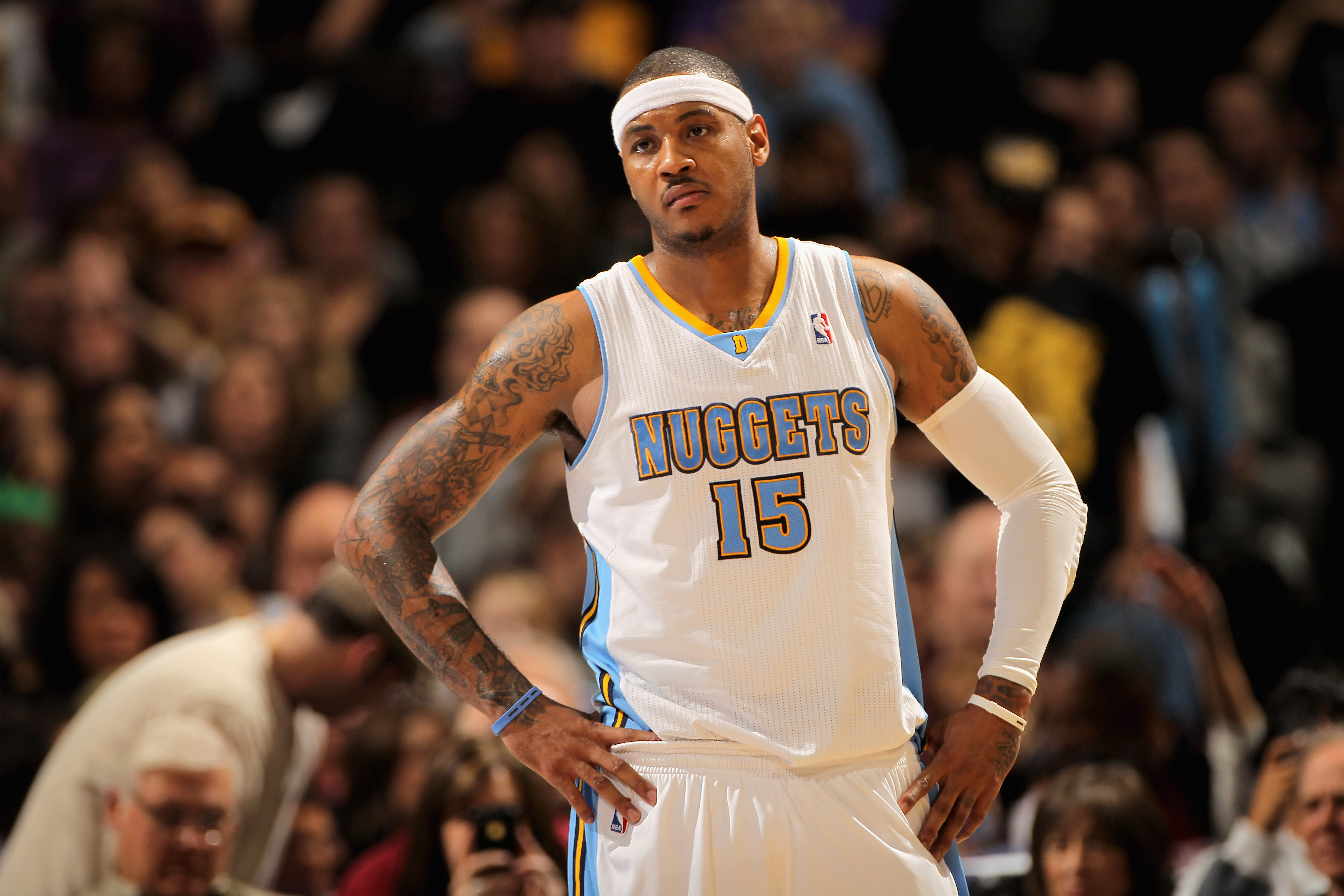 If and only if Carmelo Anthony is willing to sign an extension, then a potential Anthony for Andew Bynum swap might be worth it.

I say might because young, quality centers are a lot harder to come by than scoring small forwards who struggle on the defensive end.

Clearly, the Lakers' offense would be hard to stop with Anthony playing next to Kobe Bryant, but how much would Los Angeles have to give up for the Denver Nuggets star?

If it's Bynum and Ron Artest, Bynum and Lamar Odom or even Bynum and Shannon Brown, that's too steep a price for Anthony, especially if he's a short-term rental. 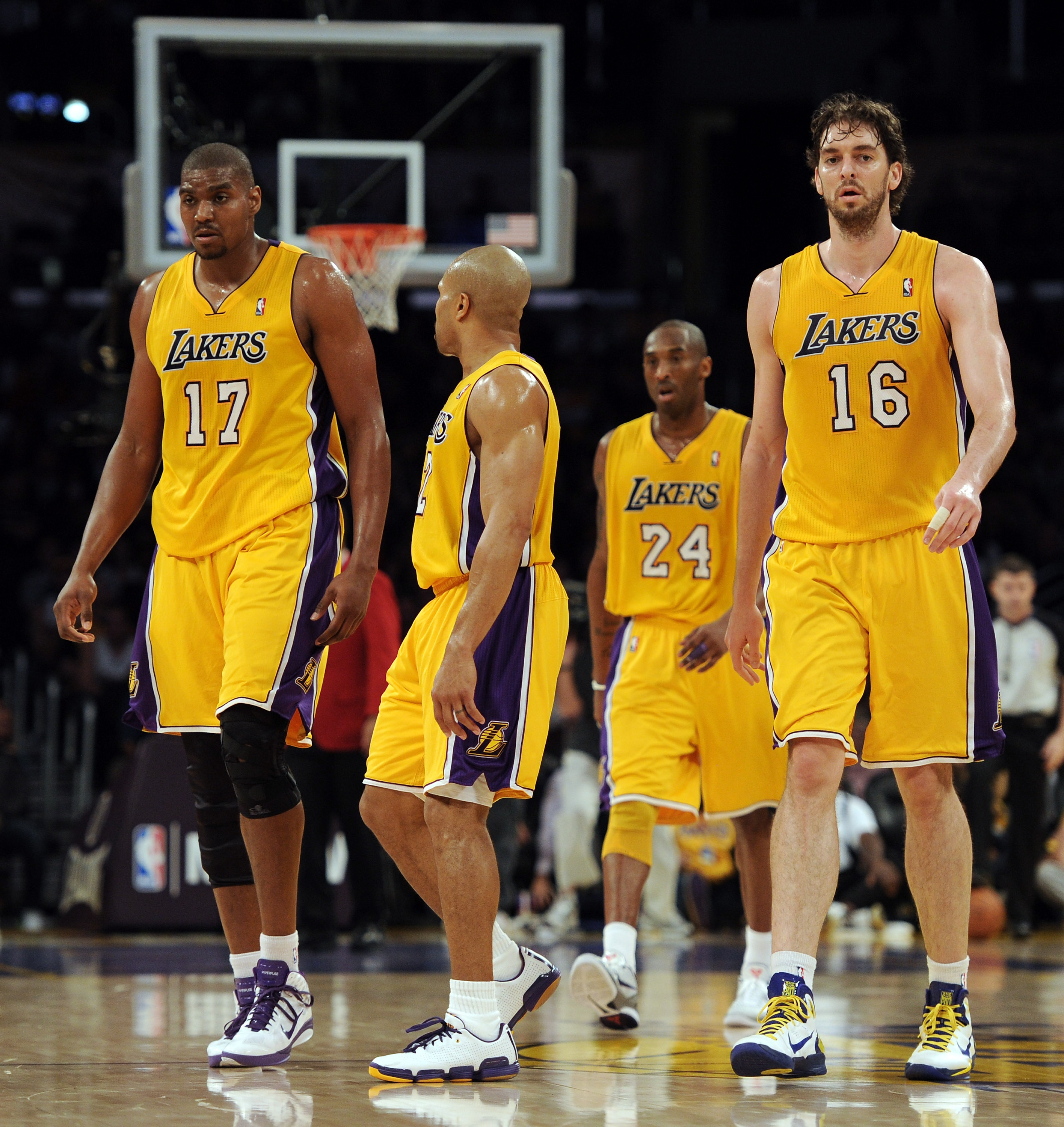 The average age of the 14 players listed on the Lakers roster is 29.5 years old.

And here are the ages of some of the team's key players.

As evidenced by the Boston Celtics and the Lakers themselves, sometimes age doesn't matter.

But at some point, it will. And that time could be approaching for the Lakers.

7. Can The Lakers Stay Afloat If Another Major Injury Occurs? 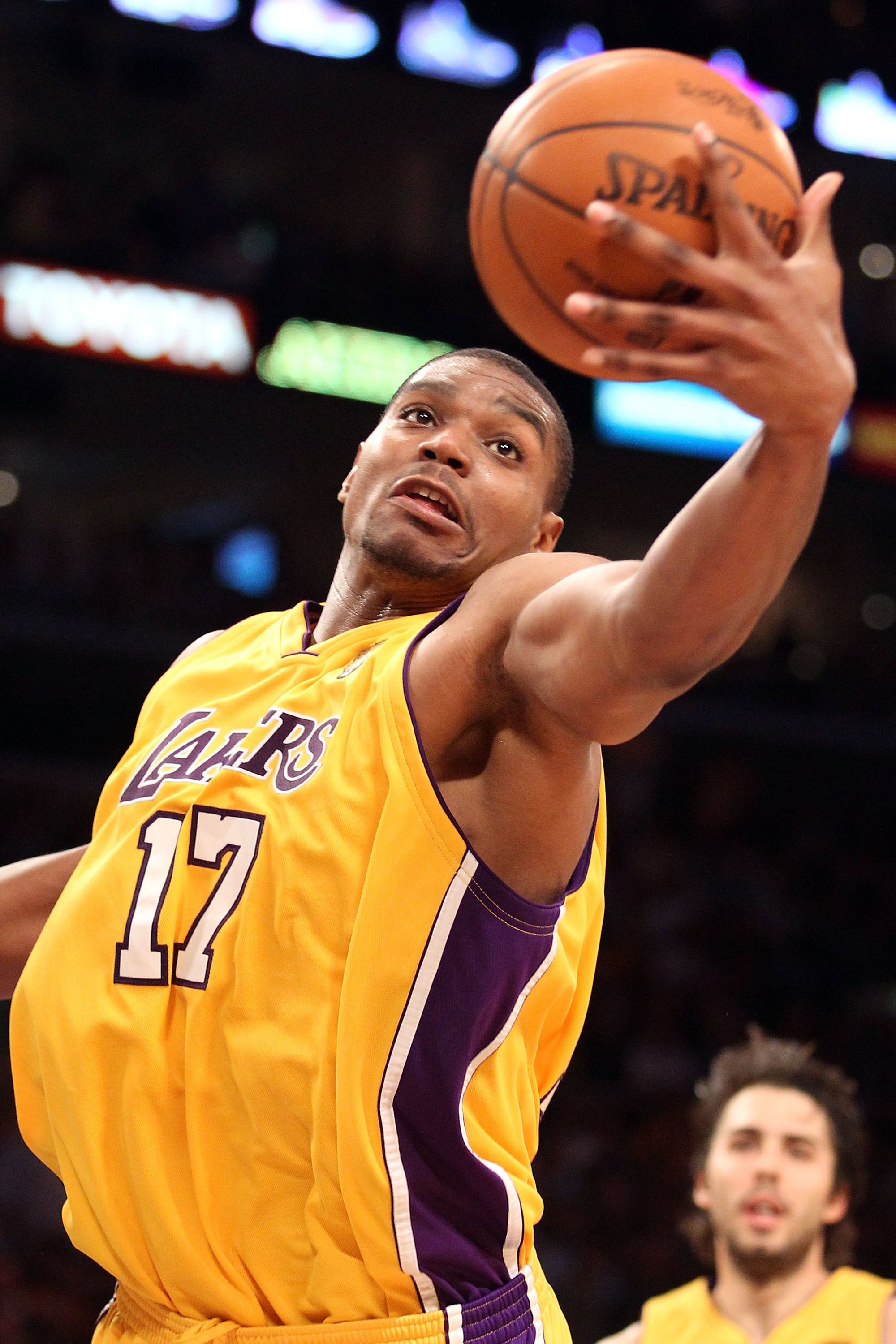 The Lakers stayed on course playing without Andrew Bynum for the first 27 games of the season, going 20-7 before Bynum's return.

The question remains, however, of how an extended layoff from not just Bynum but any star might affect the team's play.

What if Pau Gasol misses 10 games? What if Lamar Odom is out for the first round of the playoffs?

The Lakers have weathered this type of storm in the past, but there's always that chance the ship sinks this time around.

6. Can They Beat The San Antonio Spurs? 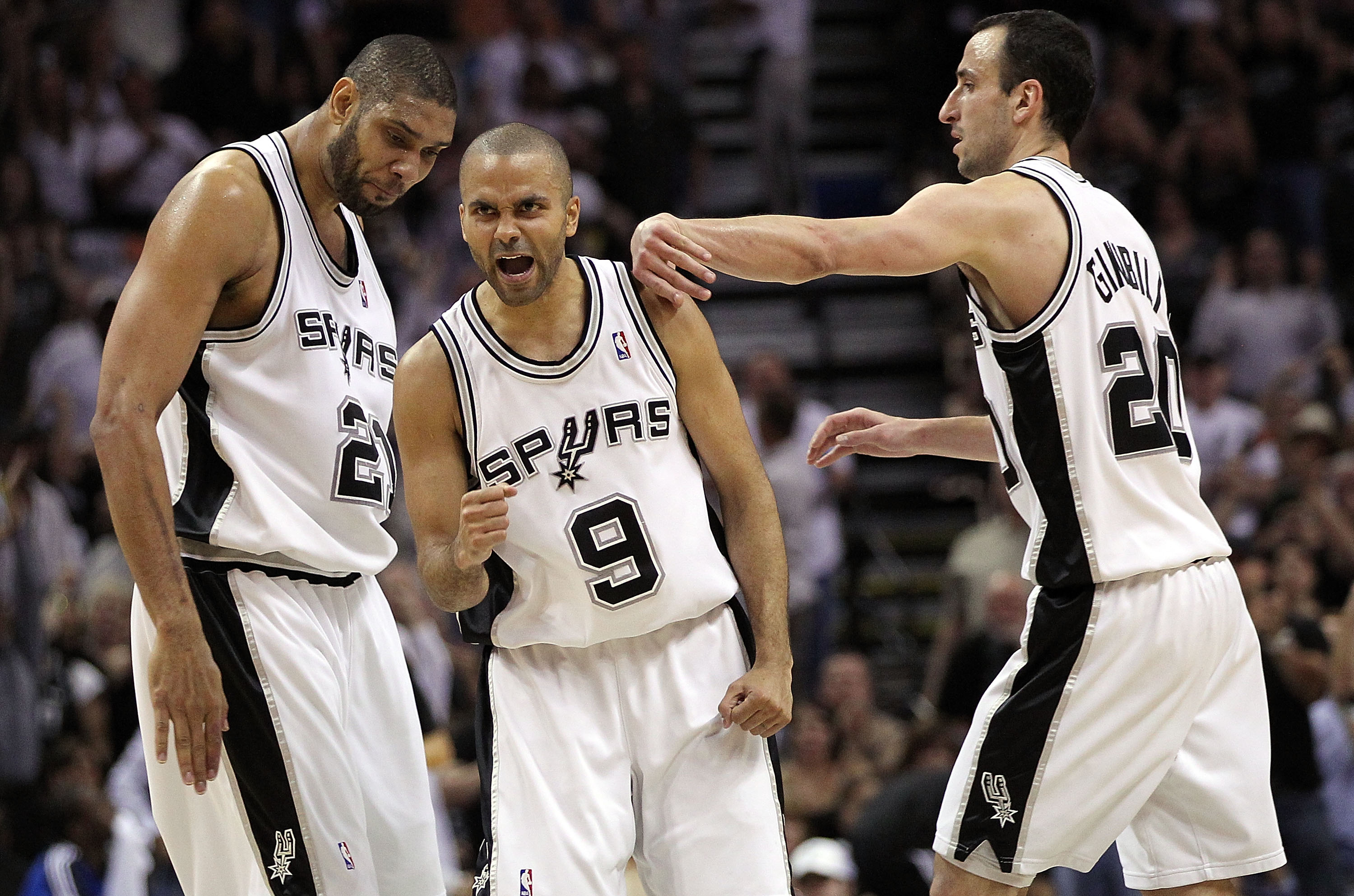 Everyone expected the San Antonio Spurs to be a playoff team this season.

But this good? I don't think so.

San Antonio is also 2-0 against the Lakers this season, though one win came on a last-second tip-in.

But still, the Spurs have been the best team in the NBA throughout the entire 2010-11 season.

Can anyone take them down?

5. Should The Lakers Start Worrying About Their Future? 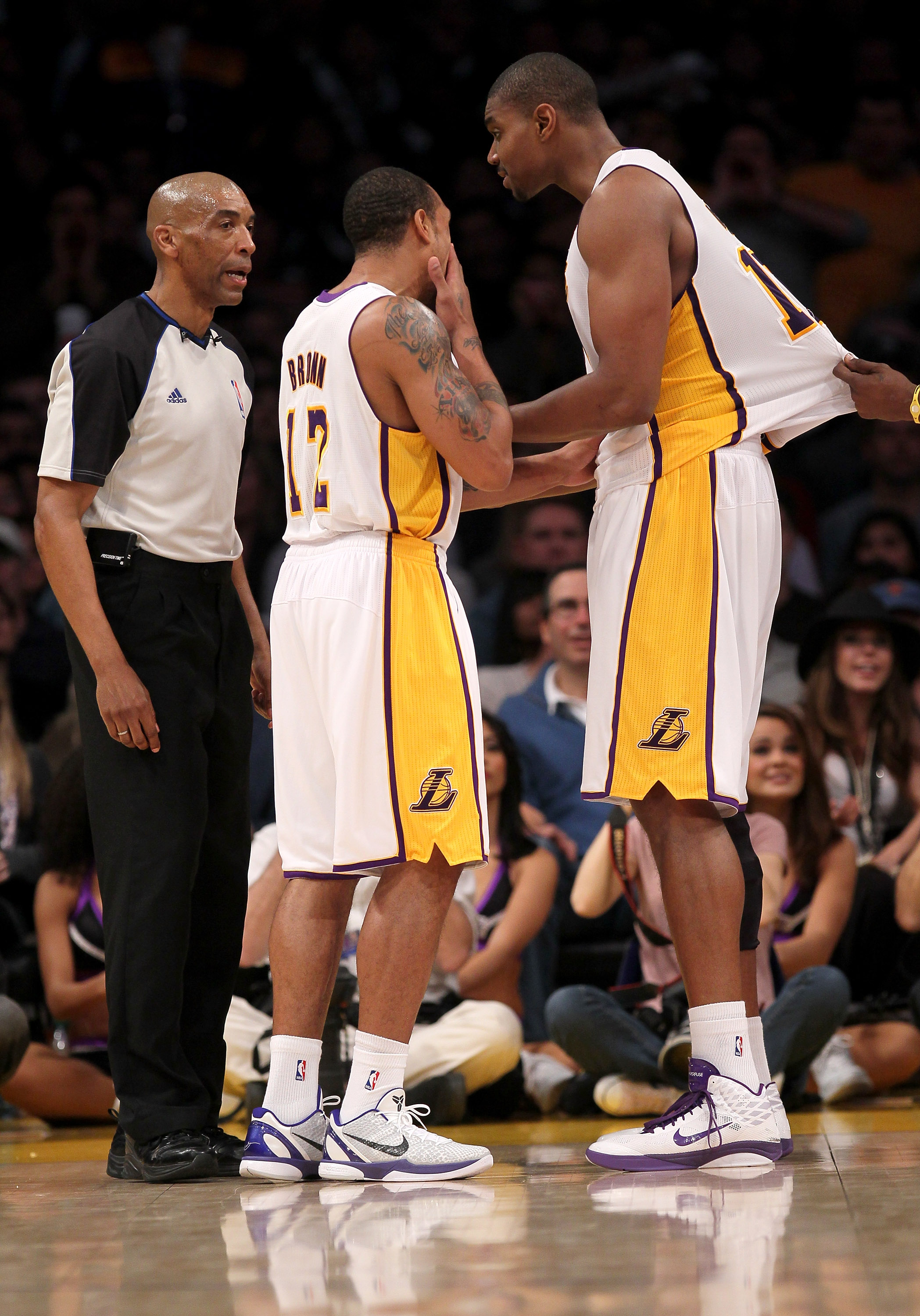 As you already know, the Lakers are one of the older teams in the league.

In turn, that makes the team's future more than just a little bit cloudy.

Shannon Brown, 25, and a healthy Andrew Bynum, 23, are two very solid building blocks for the future, but the only other players under 30 years old are Derrick Caracter, 22, and Devin Ebanks, 21.

Sure, those guys could develop into quality NBA players, but neither has the makings of a potential superstar.

Though the Lakers seem to be incredibly concerned about their current roster, they might want to think about the team's future, too.

4. Is Kobe Bryant's Career Almost Over? 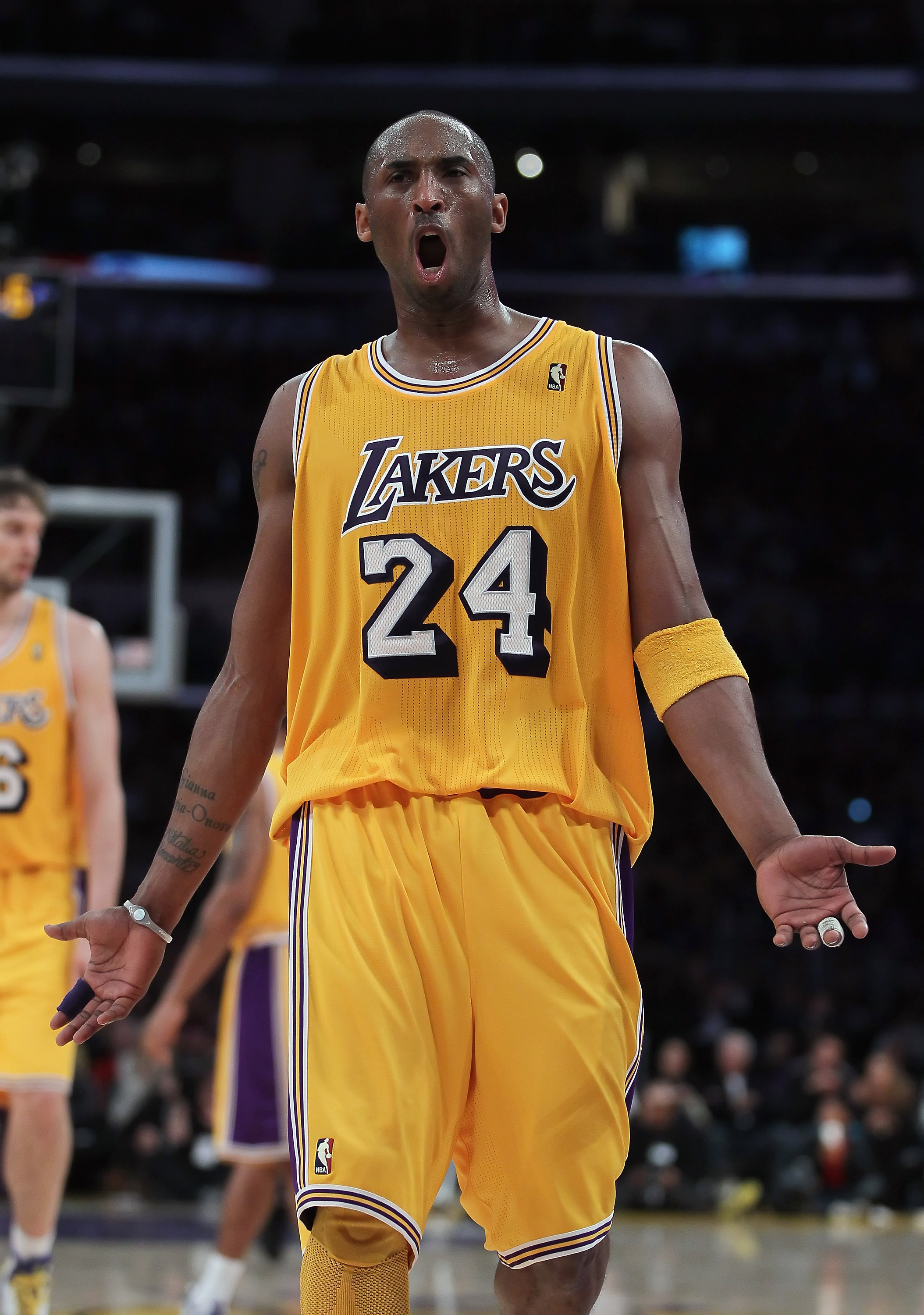 A typical 32-year-old in the NBA would have maybe 10 or 11 years of experience, but Kobe Bryant is in his 15th NBA season.

And that's 15 years of some hard-fought battles.

Bryant has played in 1,073 career regular season games, in addition to 198 career playoff games and a number of games with Team USA.

His engine has more mileage than any 32-year-old in league history.

You have to wonder when it's going to run out of gas.

3. Is Ron Artest Hurting The Team's Chances Of Winning Another Title? 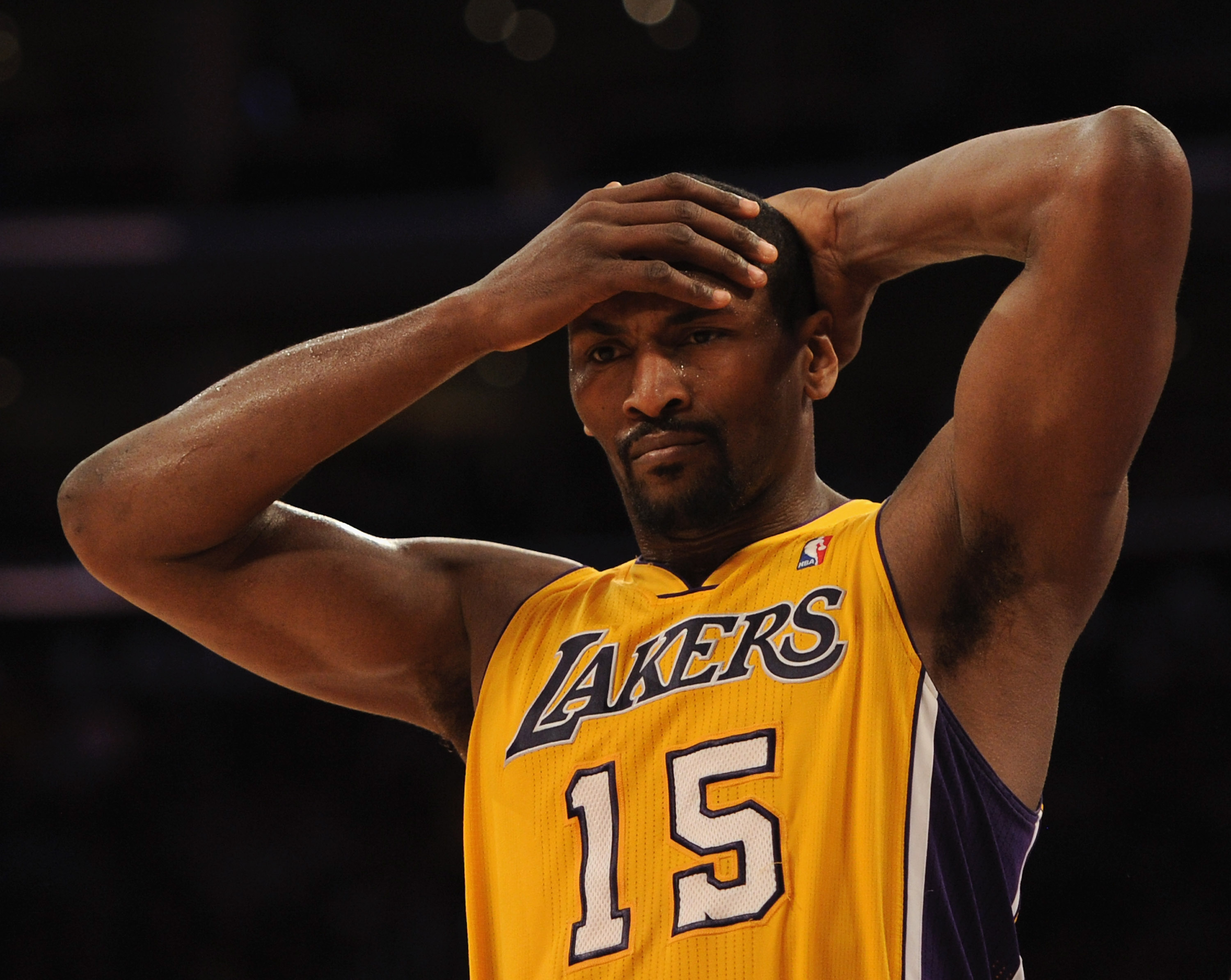 Unless you're Ron Artest's No. 1 fan, the only answer to that question is "absolutely."

After a successful first season in Los Angeles, Artest is undoubtedly having his worst season as a pro.

During the 2010-11 campaign, Artest is averaging career lows in points, rebounds, assists, steals and blocks. He is also averaging his fourth-worst field goal percentage and his second-lowest free throw percentage.

He's also taken a step back on defense. Once the league's most feared defender (but still a good one), Artest simply hasn't been the lockdown defender the Lakers need him to be.

And if he isn't, then his main value to the team simply isn't there. 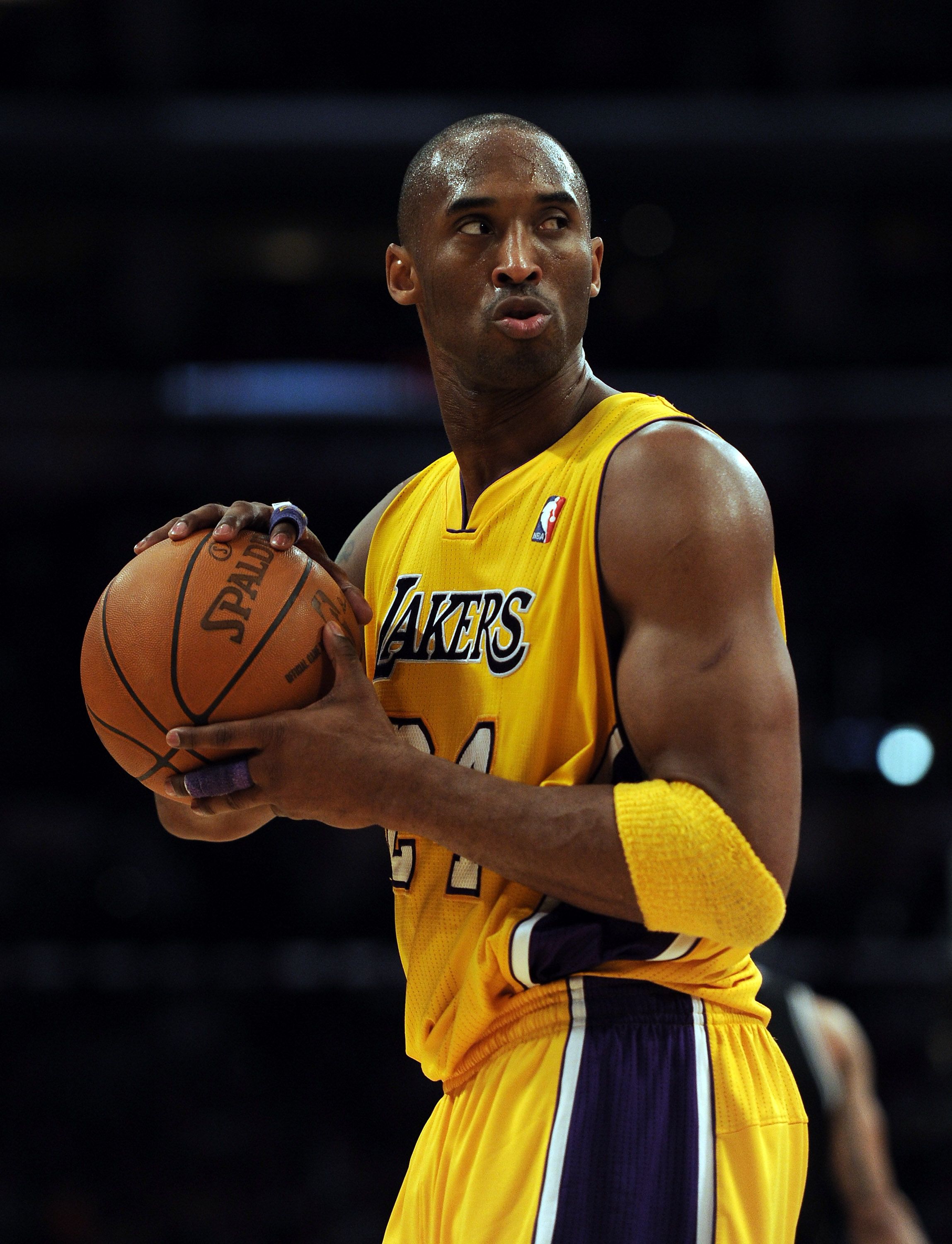 Kobe Bryant has the most important knee maybe in the history of sports.

If his surgically-repaired knee can't hold up through the regular season and the playoffs, then the Lakers' chances of winning a title don't just decrease; they go away completely.

But unless you're Ms. Cleo, you simply don't have any idea what'll happen to Bryant, his knee or his overall health.

1. Can They Win an NBA Title With Their Current Roster? 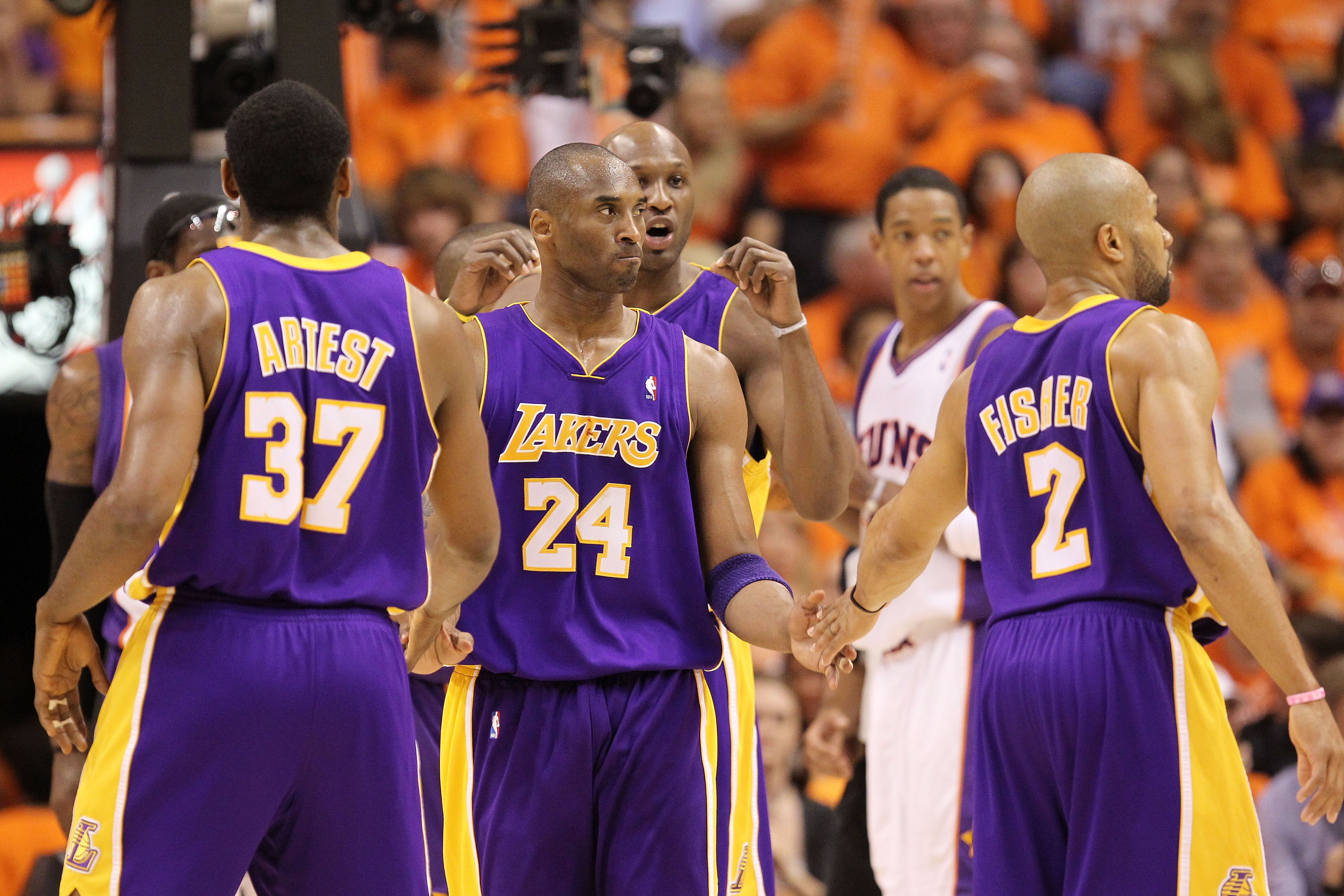 With the way LA has been playing as of late, the hot topic of debate among NBA analysts is whether the Lakers can win another title with their current roster.

The short answer is obvious: Yes.

Except for a few changes no one will ever blame the team's struggles on, like Sasha Vujacic and Jordan Farmar, the 2010-11 Lakers have the same team that won the 2010 NBA Finals.

Of course, this is this season and that was last season.

But the Lakers' return all the key pieces that led them to an NBA title less than a year ago, so this is indeed a roster that can get it done.