Miami Heat: 5 Weaknesses LeBron James and Co. Must Address, or No Championship 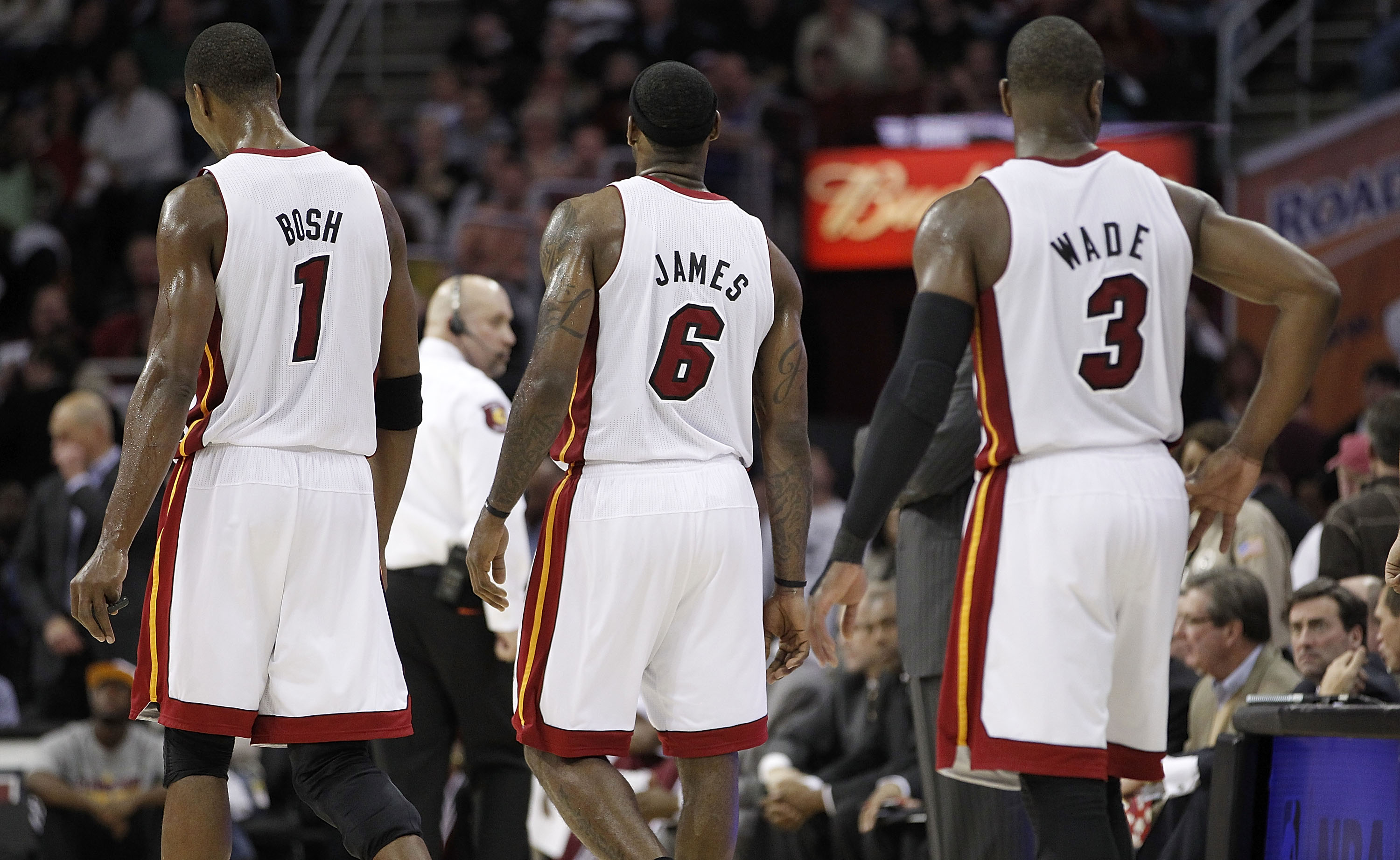 The Heat have arguably the best "Big Three" in the game right now, but they are still gelling as a team. Heat President Pat Riley has done a masterful job of piecing together a group of role players with the remaining funds under the salary cap.

The moment LeBron James and Chris Bosh joined Dwyane Wade and "his" Miami Heat, both the media and the Heat organization began to crank up the championship hyperbole. The pressure is being applied by the fans, opposing teams and the "Big Three" themselves. Nothing less than a championship will suffice.

The following are five weakness that must be addressed for the Heat to make a championship run. 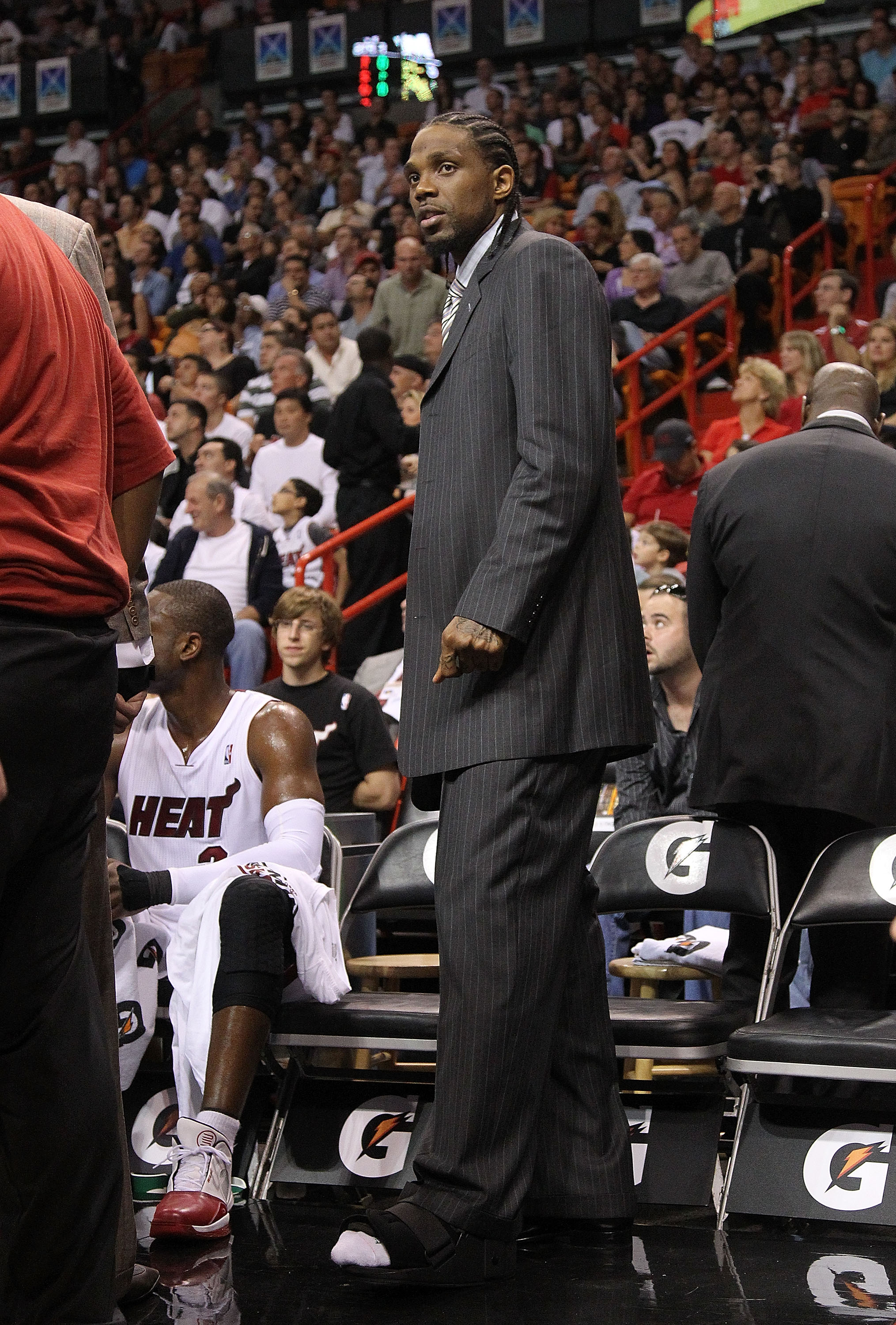 Udonis Haslem is the grunt that every championship team needs to do the dirty work. He is actually a highly skilled grunt, with 15- to 17-foot range on his jumper. Haslem suffered a foot injury and is out indefinitely. Pat Riley says that Haslem is not lost for the season, but does not know when he will return. Haslem says he'll be back by early April.

The facts are these: Haslem has a foot injury, and with a foot injury you never know. A player's estimated return from foot injuries is often unreliable. Players with these sorts of injuries generally need to be reintroduced into the lineup slowly by playing limited minutes until the adjacent ligaments are in game shape.

There have been several NBA players to have foot injuries and never returned to their original form. The most notable are Yao Ming, Bill Walton and one of the best shooting guards I ever saw, Andrew Toney. The reason you may not have heard of Toney is because he suffered a foot injury in just his fifth year, which was 84-85. Afterward, he was never great again.

The Heat may do fine in the regular season without Haslem. They will need him, or someone like him in the playoffs. Haslem is the Heat's best rebounder and their best low post and interior defender despite being undersized at 6'9". Rebounds and defensive stops are an essential element for the Heat to get James and Wade out in transition.

Miami can't count on Haslem to be at full strength for the playoffs. No one presently on the roster can fill his role, especially as a rebounder. The Heat need to trade for or sign a rebounder and defender to ensure that role is reliably filled in the playoffs. 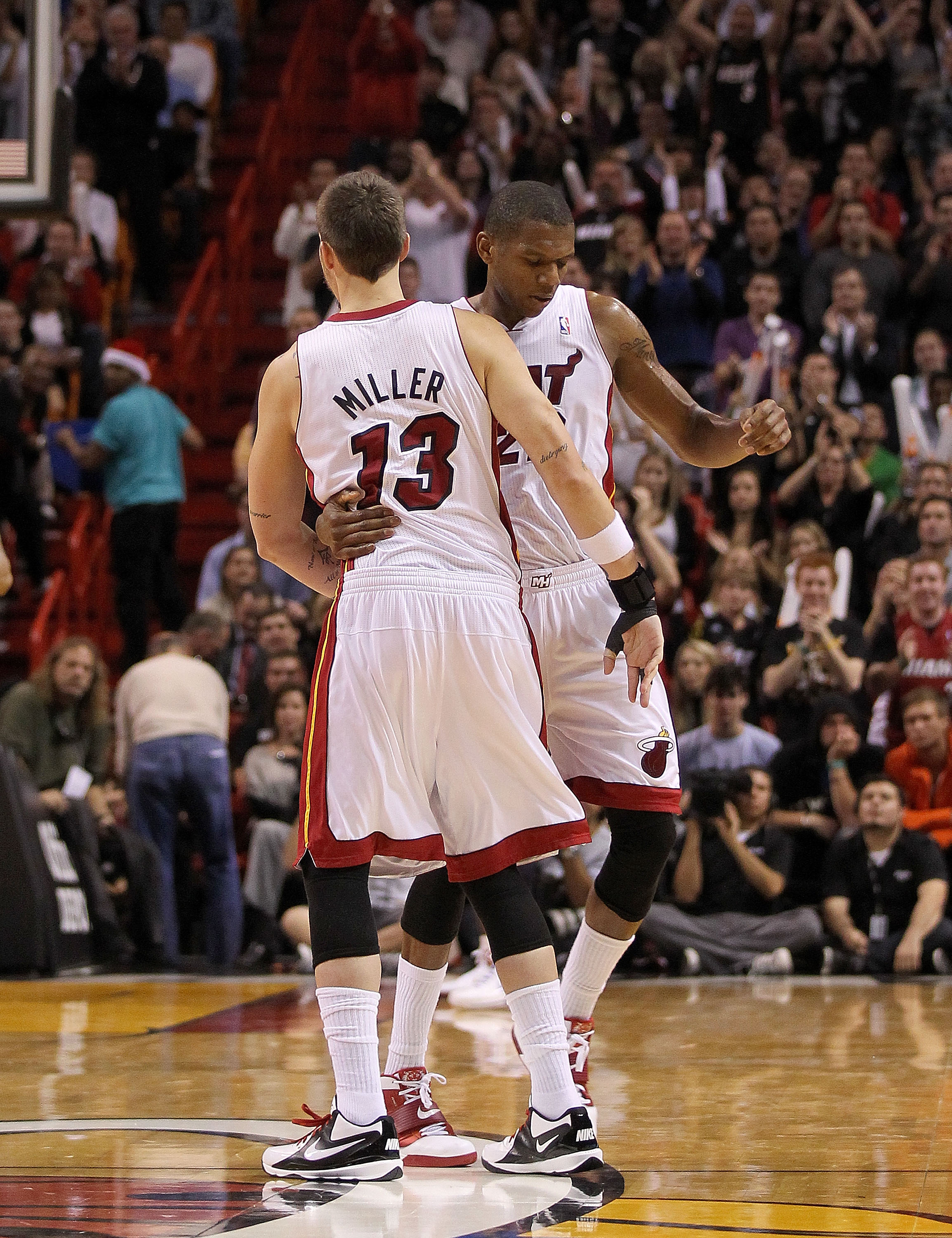 Other than the Heat's vaunted "Big Three," there is no other Heat player averaging as many as 7.2 ppg, 5 rpg or 2.3 apg. The only notable exception is Udonis Haslem, who was averaging 8.0 ppg, 8.2 rpg and anchoring the Heat's interior defense before suffering an injury after just 13 games.

The temptation is to say "that they are winning without contribution from role players." In the playoffs the best teams will play great transition defense to slow down James' and Wade's ability to score on the break. The great defensive teams will clog the paint and double team in the spots where the "Big Three" are most effective. 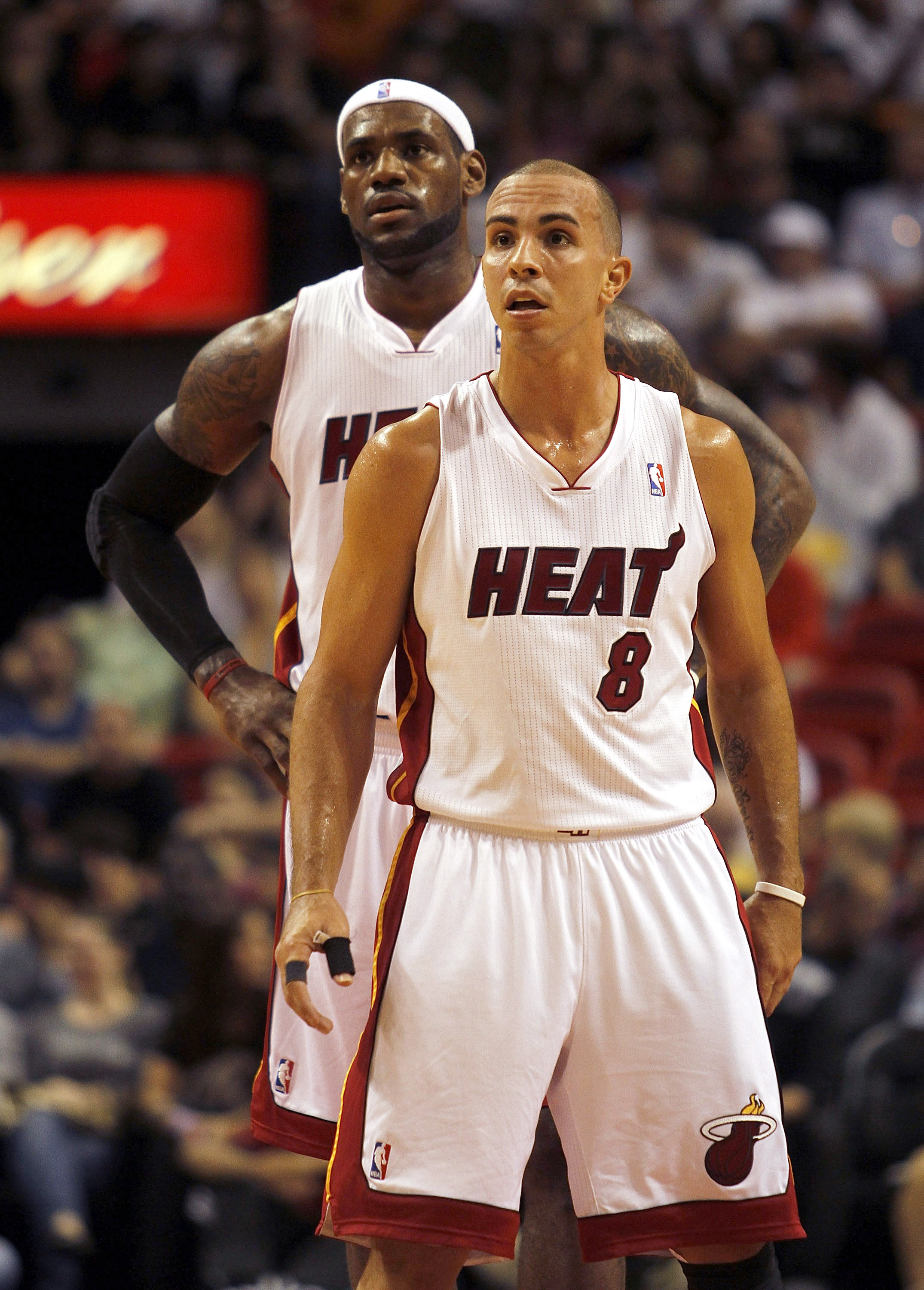 Carlos Arroyo's and Mario Chalmers' job is to bring the ball over half court under minimal pressure, give it to LeBron James or Dwyane Wade and get out of the way.

If Arroyo or Chalmers were deadeye shooters or more importantly, lockdown defenders, I could see the Heat continuing to make believe that they have someone playing point guard who is not named LeBron James. But they are not deadeye shooters, and the sham continues.

Many of you are going to look up Arroyo's stats and say, "But his field-goal percentage, .476, including .468 from three-point range, is pretty good." Unfortunately, these numbers are belied by his career percentages.

On this team, Arroyo is a catch-and-shoot player who gets the ball, standing alone at 15 feet because no one is afraid of him. He does not take enough three-point shots for his percentage to matter, and his 15- to 19-foot range does not improve the spacing for the Heat's Big Three to operate in the lane.

What is the short-term fix for this? Stop pretending LeBron is not the point guard and start Mike Miller. Miller is a lockdown, big-effort defender who is nearly healthy. Miller is a .405 3 point shooter for his career.

The Heat are already getting burned by quick point guards being guarded by Arroyo. Wade can guard any perimeter position. Starting Miller, when he is healthy, and putting Wade on the point guard will sure up the defense and add to the spacing in the half-court offense because of Miller's three-point shooting. 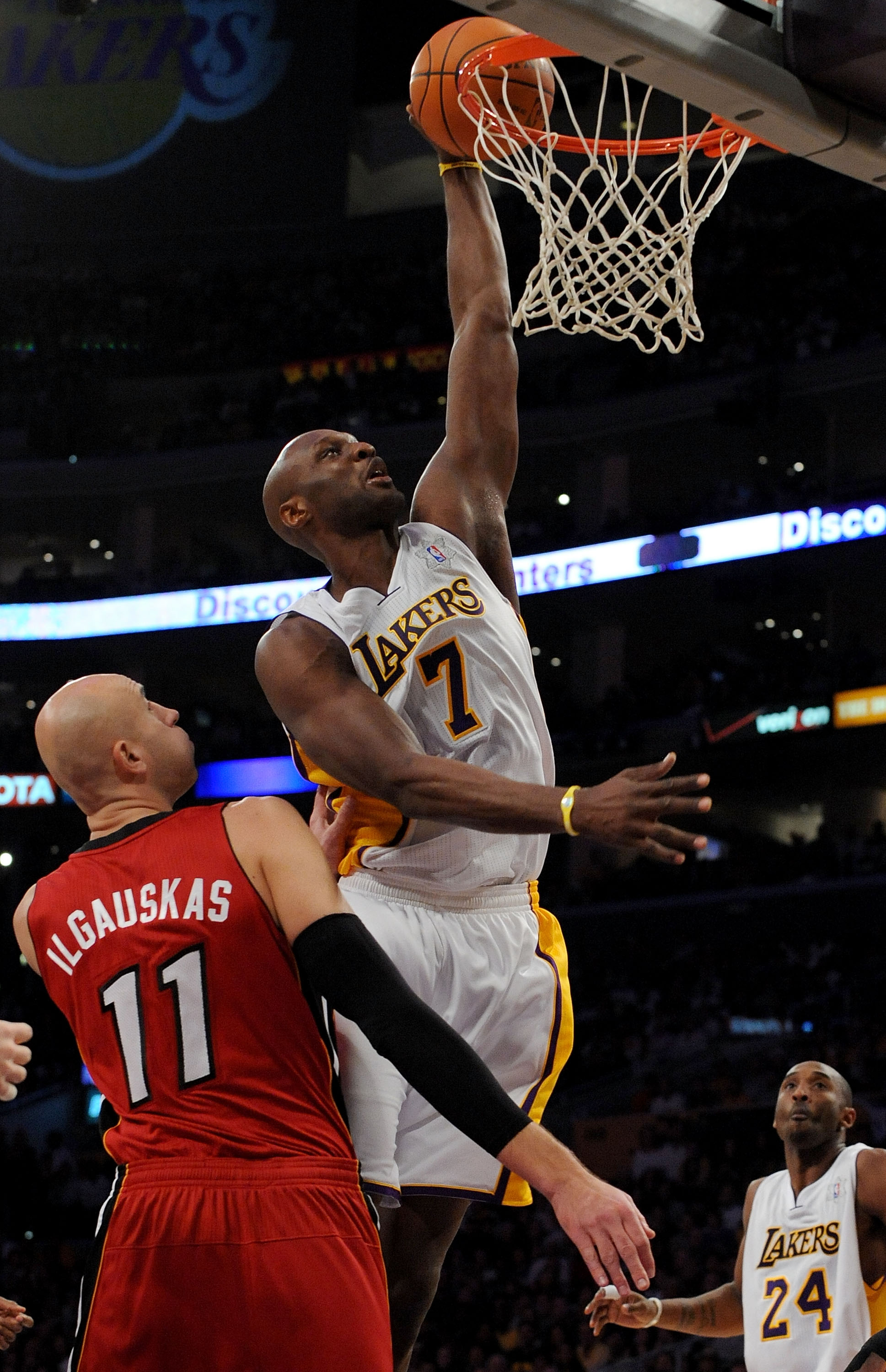 The Heat are one of the most highly ranked defensive teams in the league because their perimeter and transition defense is outstanding. However, their interior defense is manned by a group of geriatric gents who can be seen on the sidelines swilling Geritol and uttering phrases that begin with the words, "Back in my day."

Zydrunas Ilgauskas, Erick Dampier and 72-year-old Juwan Howard do a good job of defending players with a "back-to-the-basket" offensive game. Where they struggle is with big men who can run in transition, face up and shoot or take them off the dribble, forcing them to move their feet.

Joel Anthony is a good hard-hat, lunch-pail defender who is excellent at team and help defense, but he is undersized at 6'9". He is better at moving his feet than the codger brigade, but the longer post players tend to simply shoot over him.

The Lakers turned in a lackluster performance on Christmas day. Dwyane Wade said in a postgame interview that the Heat's perimeter defense was so good because they did not have to help down low. That's because the dunks and drives by Gasol and Odom happened so quickly that there wasn't time for them to help.

The Heat played well, the Lakers played poorly. Anyone who believes the Heat are 19 points better than the Lakers is mistaken. After Phil Jackson's analysis of that game, the Heat's interior defense will be exposed when next they meet.

In the playoffs, teams pound the ball inside. To win a championship they must be able to defend down low, whether it's back-to-the-basket, off-the-dribble or help defense. 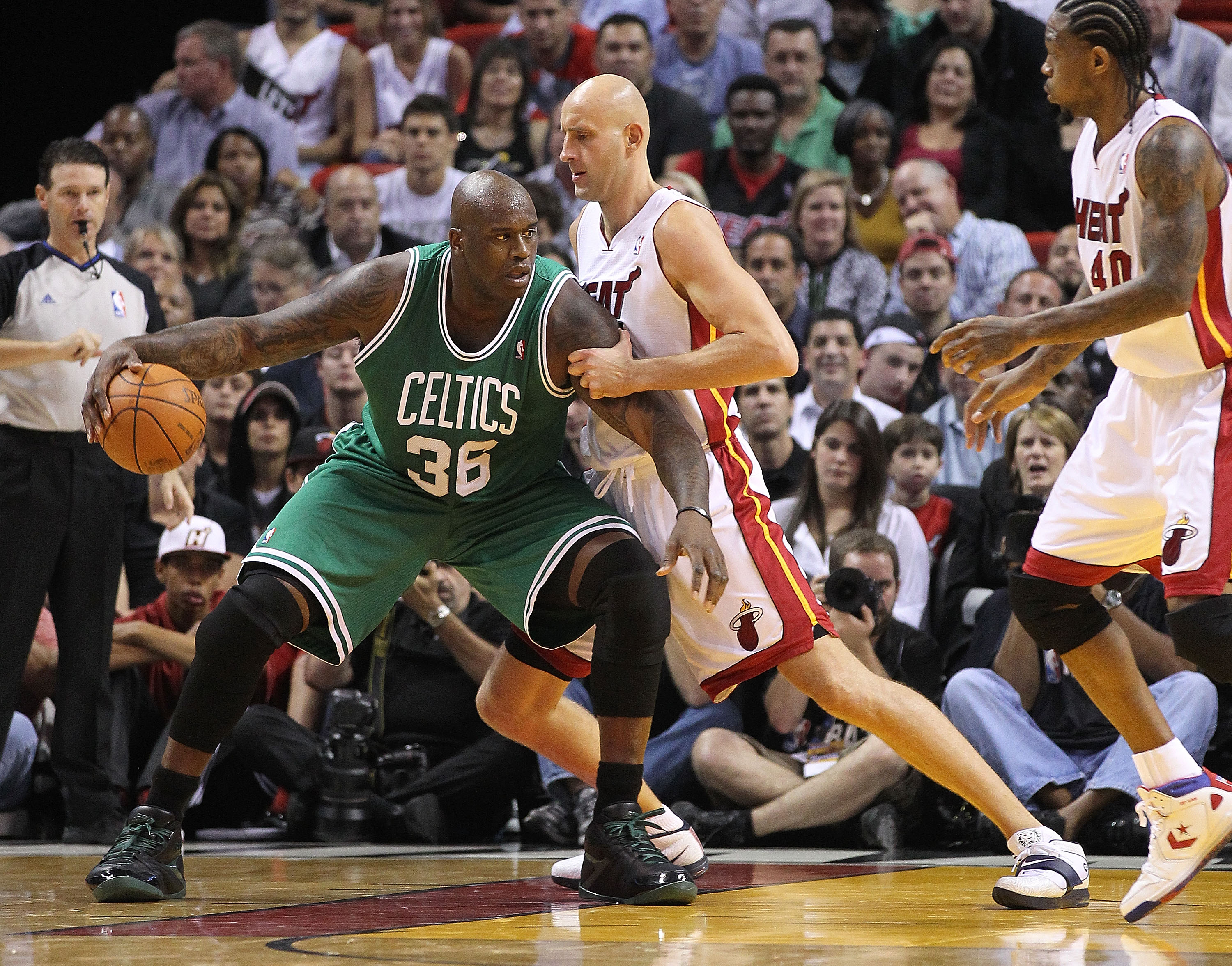 In the playoffs, each possession becomes more valuable. The games slow down, and half-court spacing and execution become the most important part of the offensive game. Recent NBA history proves that teams need a consistent low-post scoring threat to provide the proper floor spacing.

When a team establishes that a single defender cannot stop their low-post player  from "finishing strong at the rim," or making high-percentage shots in the paint, passing, cutting and driving lanes are created and space is surrendered for perimeter players to catch and shoot.

Kobe won with Shaq but never made it back to the Finals until the Lakers got Gasol. Wade never got to the Finals until Shaq came to the Heat and has only dreamed about them since. The Finals were just a fantasy for Paul Pierce until the Celtics acquired Garnett. Pierce and Ray Allen went nowhere the next year when Garnett was hurt. The Celtics got off to a great start in 2009-2010 with a healthy Garnett. Garnett got hurt, the Celtics slumped.

Garnett came back, but he wasn't quite himself, and the Celtics got to the Finals, even though many thought they would lose to the younger Cavaliers. The Celtics lost in seven to Kobe and Gasol after losing one of their post defenders to injury.

As a poignant aside, the Cavaliers lost the Eastern Conference Championship series two years in a row to teams with an offensive post threat.

Conversely, it seems every year there is yet another retooled, run-and-gun team taking the NBA by storm. Their teams are built around a great perimeter player such as the Phoenix Suns' lock for "the Hall" Steve Nash, Dirk Nowitzki, Kobe Bryant between centers or LeBron James. It's fun to watch these teams amass victories in the regular season, but they do not win championships

Chis Bosh is not a low-post scorer. He can score down low, but his inside scoring is set up by his face-up jumper from 15 feet. Bosh is playing well right now, but his game does not facilitate spacing and team execution the way a back-to-the-basket post player does.

Zydrunas Ilgauskas seems to fit in well with the Heat because he and LeBron have great "pick-and-pop" chemistry that they built together in Cleveland. His offensive game doesn't clog the middle, which enables the three young stars to drive the lane. Ilgauskas is too slow to provide a consistent low-post threat without clogging the lane.

What is the short-term solution? The Bulls had Bill Cartwright, Luc Longley and a bevy of less-than-dependable scorers in the post. What did they do? They stuck Jordan down there to shoot that indefensible turnaround, fall-away jumper, and that saw them through.

I don't know if LeBron has a post game, but he should get one. A passer like James in the post would be a devastating weapon. Whether it's James or someone they trade for, sign, or develop, the Heat are going to need a low-post scorer from somewhere if they are to win a championship.