NBA: Now That the Suns Have Made Some Magic, What Other Trades Should Happen? 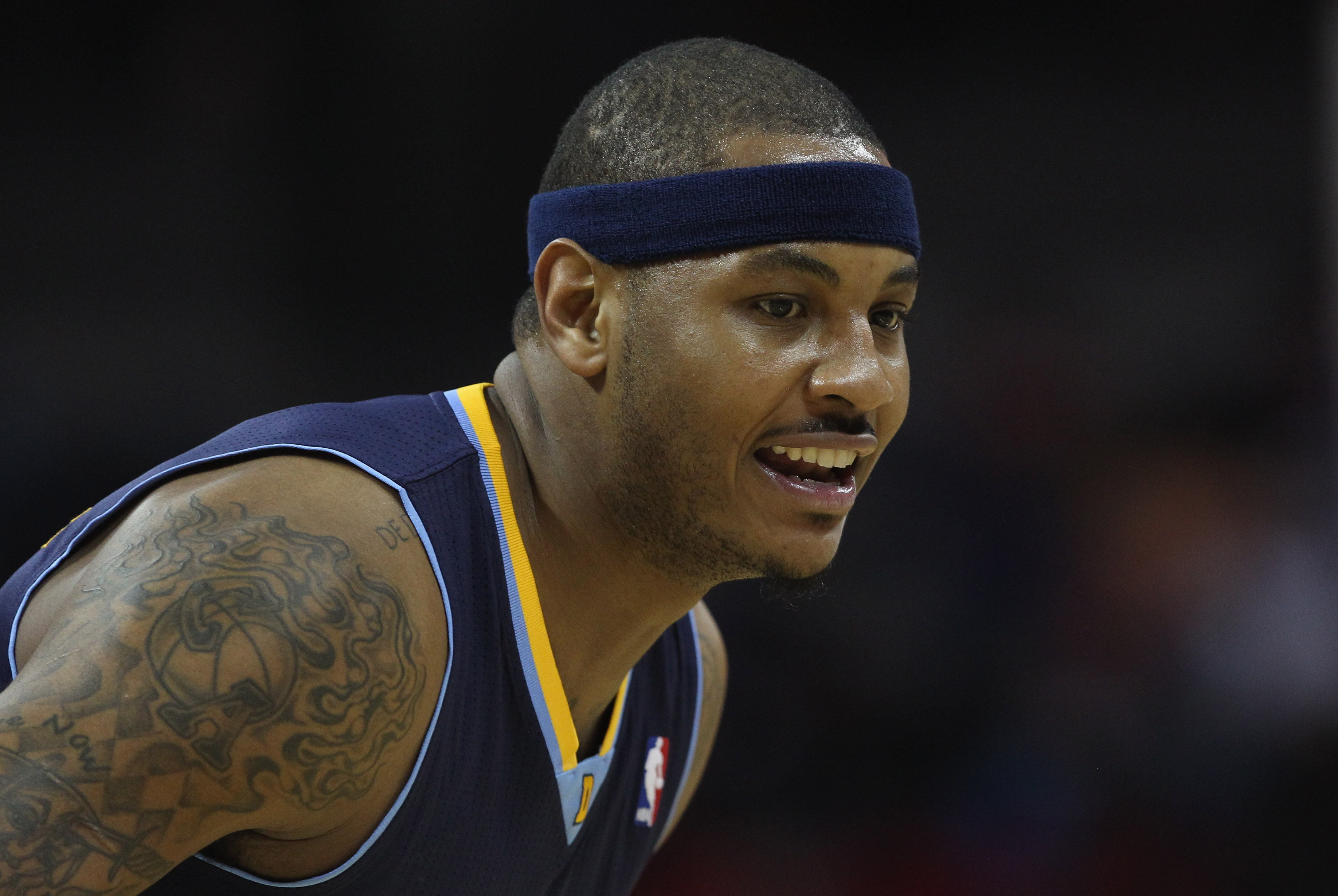 If the grass is greener and I'm this happy in Denver. Imagine how happy I can be somewhere else!Streeter Lecka/Getty Images

Gilbert Arenas has found himself in the trade rumor mill all season long. On Saturday, he was finally traded to the Orlando Magic in exchange for Rashard Lewis.

These moves were some of the biggest trades the NBA has seen in the last couple of years, with big-name players moving in both trades.

With these trades happening on Saturday, what other trades would make sense for some other teams in the league?

Here is a list of trades that should happen by the time the NBA trade deadline has passed. 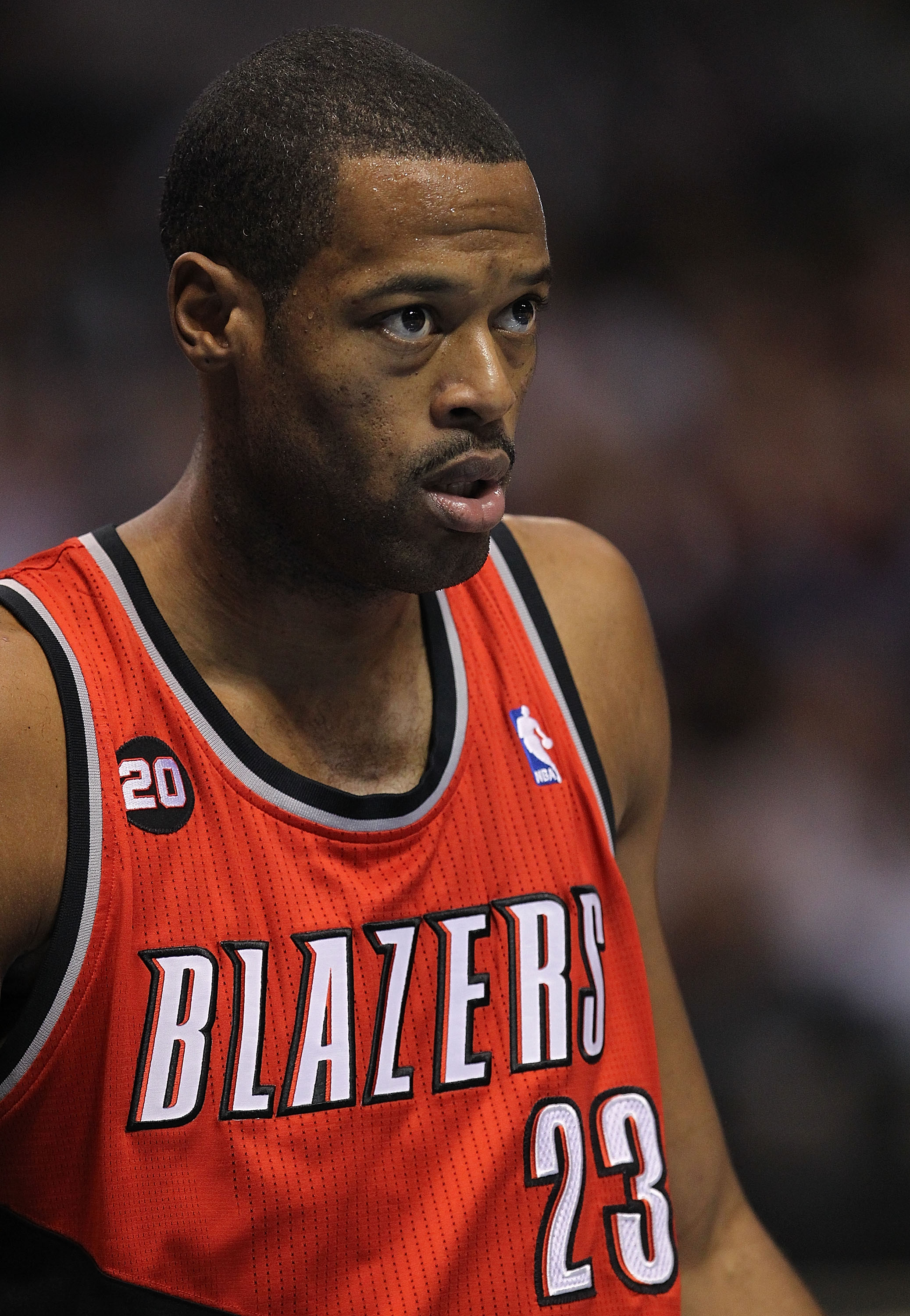 The Portland Trailblazers have gone from the most promising team for the future to a team that is ready to rebuild.

Brandon Roy's knees are going to ruin a career that would've been beautiful. The guy that Kobe Bryant has praised as the toughest cover in the league, or just simply "a bad boy," is having trouble staying on the court for more than 30 minutes a game. The Blazers are already trying to figure out what they should do with his minutes to prolong his career—and he's not even old.

This team is 14-14 and struggling as of late. Soon they are going to lose their eight seed to a team like the Suns or the Grizzlies who are playing better basketball. When that happens, it will be time to abandon ship.

The Blazers have a couple of veteran big men that other teams are going to covet. The Knicks are one of these teams. They have been linked to Joel Przybilla, but I think the team would benefit more by adding Marcus Camby. Camby has been in New York before, is still playing great defense and can get up and down the court with ease for a big man, and that is very important to coach D'Antoni. The trade would be as follows:

This trade makes sense for both teams. Expiring contracts mean a lot in the NBA, and Eddy Curry's is almost as fat as he is. With this trade the Blazers would get out of a two-year, $20 million contract that they gave to Marcus Camby. They'd receive a contract worth a little bit more that would allow them to sign a big name in the offseason.

Armon Johnson would be a throw-in for the trade, but would also provide the Knicks with a backup for Raymond Felton.

I know Knicks fans want Carmelo Anthony, but this team is an interior defender away from making a run in the Eastern Conference playoffs. Why throw away all the chemistry by getting rid of guys like Fields, Gallinari and Chandler when you can get a guy like Camby who fills the biggest need on a team that's already 16-12 and a six seed in their conference?

Melo to the Sixers 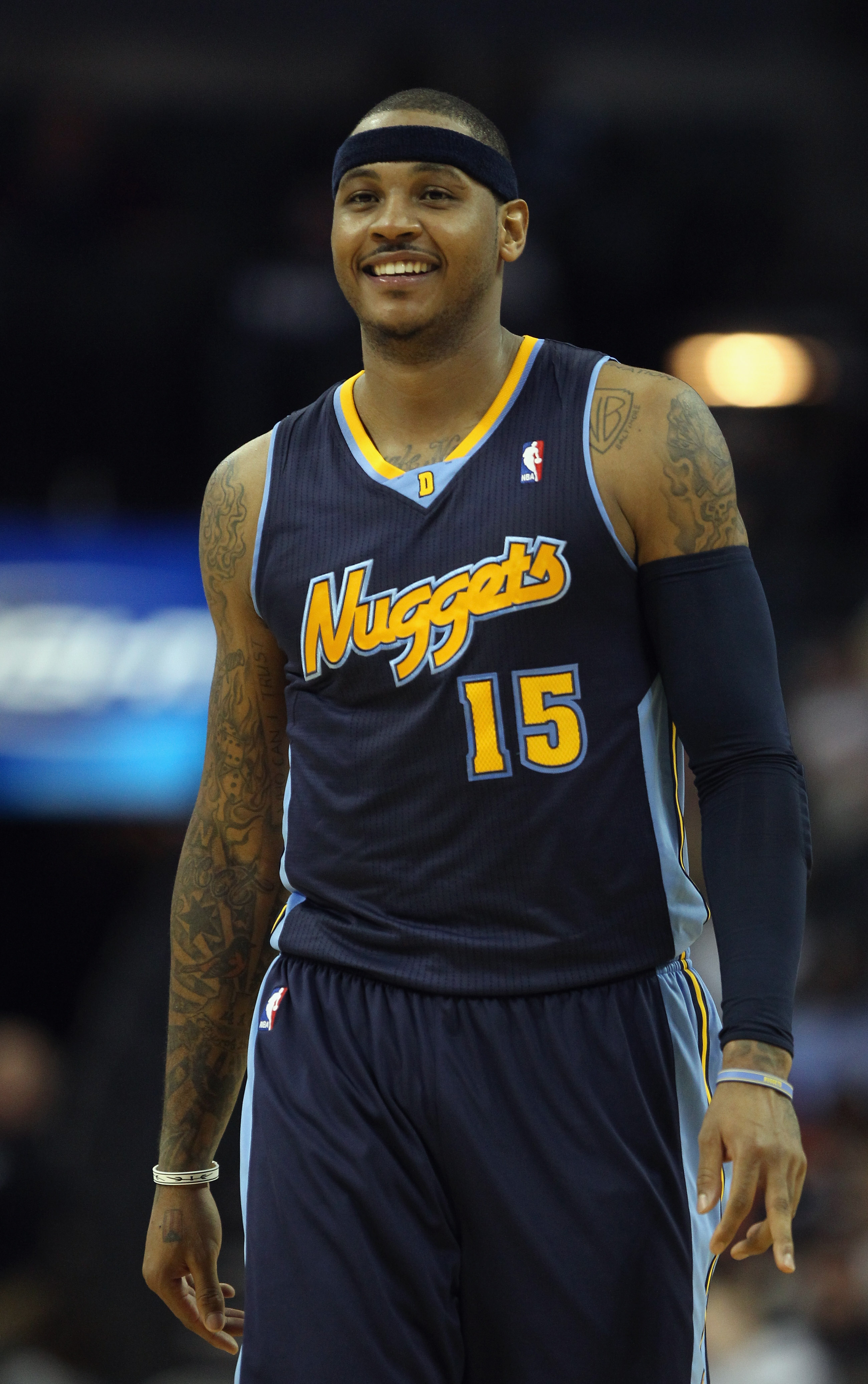 I guess I'll serve my time in Philly before "taking my talents" elsewhere.Streeter Lecka/Getty Images

Well, this is a trade that I feel would make sense for both the Nuggets and the Sixers. Carmelo Anthony wants out of Denver and the Nuggets have expressed interest in Andre Iguodala.

One problem with this trade is that Carmelo Anthony has said numerous times that he won't sign extensions with certain teams and the Sixers would be one of these teams. But, I don't think the Sixers should mind renting Carmelo Anthony. The trade would be as follows:

Andre Iguodala is a good player, but not a franchise player. He is, however, getting paid franchise-player money. The Sixers would be able to play with Carmelo Anthony for the season and if he walks after this year, they free up the cap space. Same goes for J.R Smith. These players can help the Sixers compete in the East for the rest of the season and playoffs. A lineup of Holiday, Smith, Anthony, Brand and Hawes sounds very good to me.

Meanwhile on the other side, the Nuggets receive a replacement at small forward for Anthony in Iguodala. They also get the expiring contract of Jason Kapono along with a promising young player in Thaddeus Young who has already proved he can contribute in this league. On top of the players, they are receiving two first-round picks. Now, this year's pick would be in the 15-20 range, but if Carmelo doesn't re-sign, the Sixers would be lottery bound again, which means the pick would be a good one.

This trade would put the Sixers in a good place for this season, and if Carmelo leaves, they can attract a big-name free agent in the offseason. The Nuggets, on the other hand, would still compete for the playoffs in the West with Iguodala, who's no slouch. They'd also be set for the future with some more cap space and young talent.

The Nets and Knicks have made offers, but nothing near what Philly can do for the Nuggets. 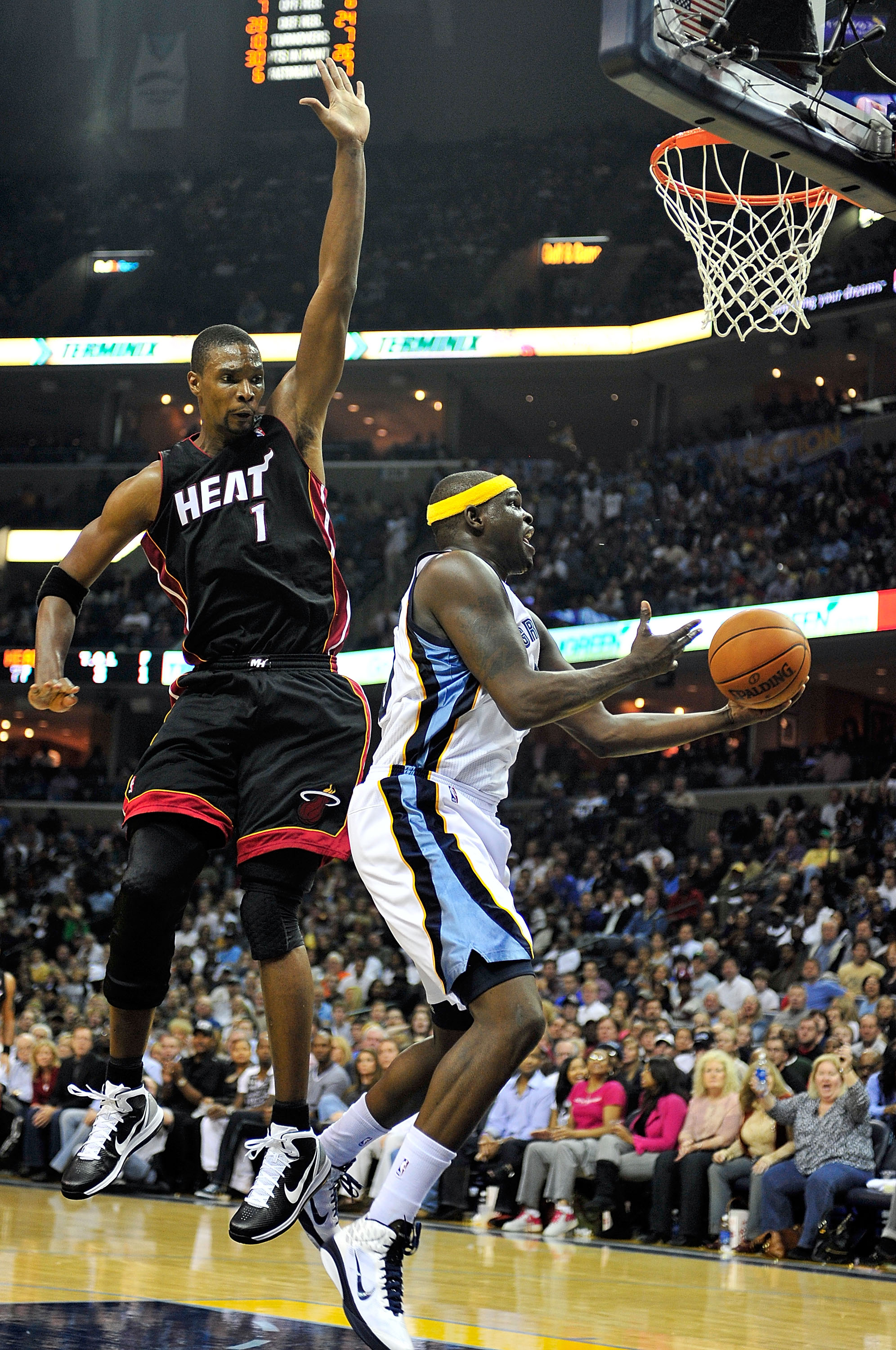 The better lefty power forward of the NBA...Grant Halverson/Getty Images

The Magic have just completed a series of big trades, but they're not done yet. The team still has an opening at power forward and too many talented players at the guard position (never too bad of a problem).

This team has a lot of talent with Gilbert and Dwight. Add Jameer Nelson and Turkoglu and it's enough to give them the shake-up they needed after under-performing the last couple of weeks. To get back to the championship, they're going to need a grinder who can play opposite Dwight and make opposing teams fear playing the Magic. Here's my idea:

Both Randolph and Richardson are expiring contracts. Both have been contributing this year, and although Randolph is the much better player in the trade, it would make sense for both teams to pull the trigger on this. Memphis is making a playoff push, but will probably fall short yet again. They don't want to pay Randolph the money he is asking for in the offseason and will probably lose him to somebody who does.

Memphis would be getting a player who can fill a gap at shooting guard for a team that seems to have lost faith in OJ Mayo (despite that performance against the Spurs last night) as well as a guy in Bass who would serve as a good spot starter the rest of the year or backup to Darrell Arthur, who I think can really fit in well if given the chance to star.

If they do decide to let JRich go, they'd be able to show Marc Gasol the money, and also draft somebody late in the first round along with their pick. Perhaps this first-rounder could be a cheaper Randolph replacement, but who knows?

Orlando would instantly become my favorites to win the NBA championship this year. Say what you want about Randolph's lack of teamwork, the guy hustles every night and is an absolute beast. Can you imagine what Nelson, Arenas, Turkoglu, Randolph and Howard could do together? This potentially would be the best offensive team the sport has ever seen. They'd be the only team ever that is capable of winning a championship without having capable defenders on the floor.

This trade, although unlikely, would really benefit both teams as Memphis is going to lose Randolph in the offseason for nothing and can actually pick up some talent, while the Magic would get the power forward they've been looking for.

Haywood, Butler to the Thunder 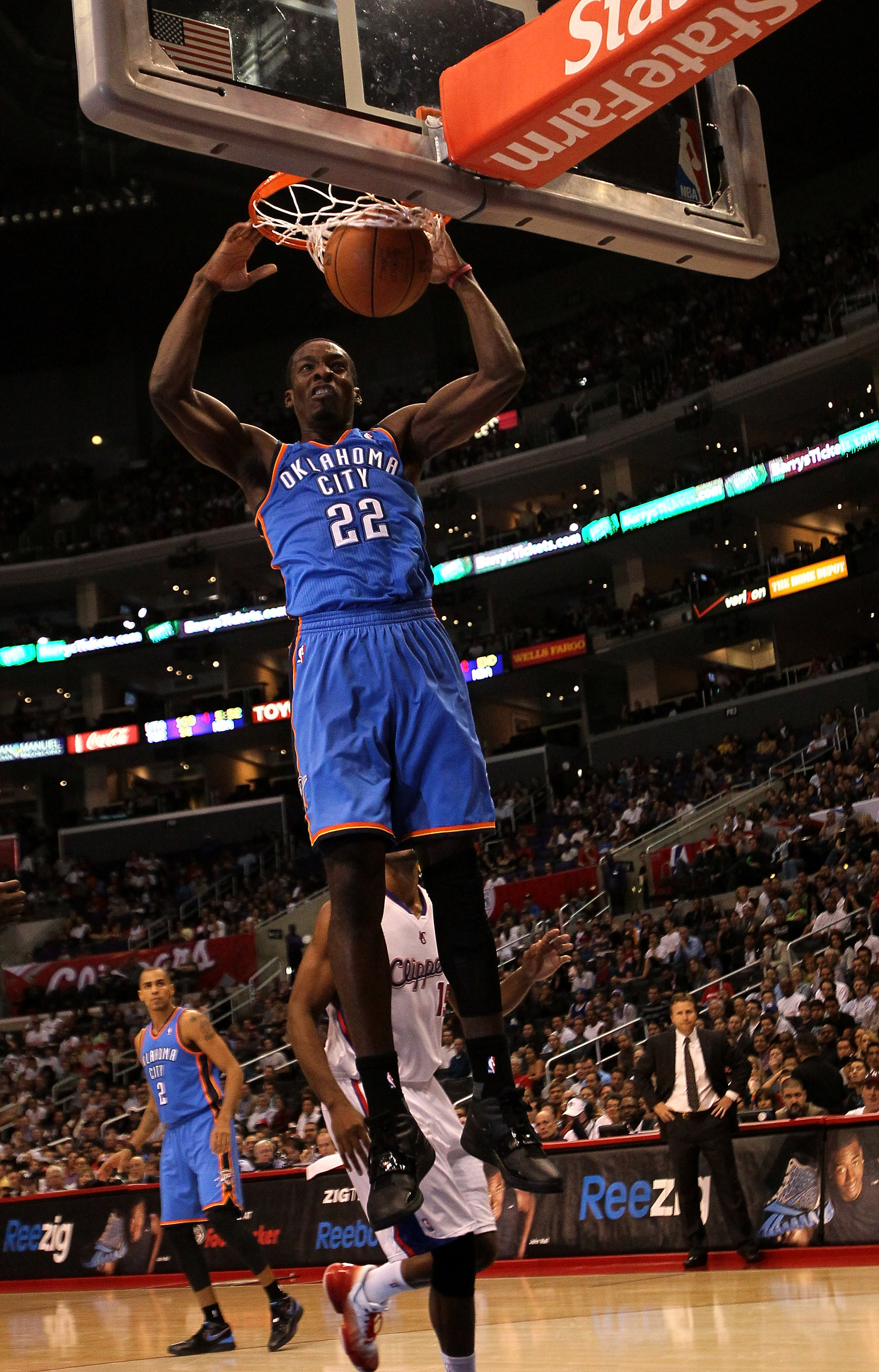 I know Cuban's going to pay me my money!Stephen Dunn/Getty Images

The Thunder have a great thing going for them. They are in a small market with loyal players and an incredible fanbase.

Kevin Durant and Russell Westbrook are budding superstars (Durant already, Westbrook soon) and the team is missing a few pieces that can put them over the top and help them beat the Lakers out in the West. The pieces they are missing can be acquired by doing this:

Caron Butler has been disappointing ever since being traded to Dallas and Tyson Chandler has emerged as Dallas' center for both the present and future. The team can use a young guy like Jeff Green to come in and play small forward (which I feel is his natural position). Marion has the ability to guard shooting guards, so if he played shooting guard and Green played small forward, defensively they wouldn't lose a step. They could start Terry at shooting guard if they're willing to break that whole "bring a guy who clearly should be starting off the bench" fad.

Green would give them another guy who could stretch the floor and score the basketball. Cole Aldrich would take the place of Haywood as backup center and he'd be able to come and play some good defensive minutes, while the Mavericks would ultimately have to eat Collison's bad contract, although he would make a better backup power forward than Brian Cardinal. Then again, so would Danny DeVito.

Oklahoma City on the other hand would finally be able to match up with the Lakers inside. Ibaka and Haywood would make a tandem that could cause Gasol and Bynum fits while Westbrook and Durant score at will all over the court. The Thunder would have to start Ibaka next to Haywood, of course, and they would probably try to bring Butler off the bench with Harden, which sounds like a great scoring duo to me. Especially for a second unit.

This trade would be two of the Western Conference powerhouses trading with each other to put each in the NBA's elite.

Prince and Hamilton to the Bulls 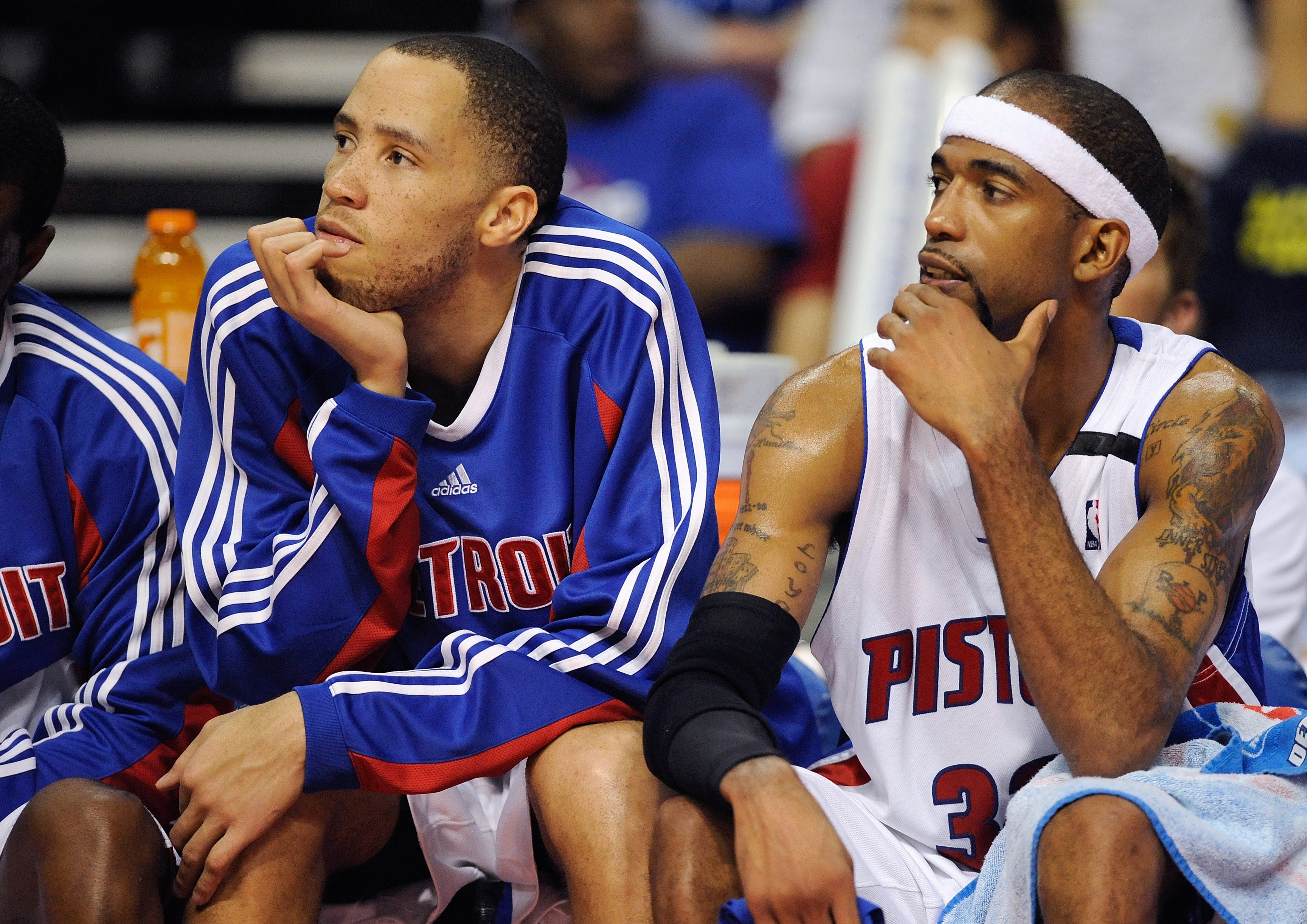 The Chicago Bulls are ready to compete for a championship...only after they fix their lack of a starting shooting guard. They also are without Joakim Noah for the next month or two, which leaves them needing a center to fill in for the meantime. Here's what I propose:

Detroit has been looking to rid themselves of Hamilton and Prince for almost three years now. They may have finally found a team that makes sense.

The Bulls would be losing their starting small forward, but picking up a starting shooting guard and a replacement for Deng. Hamilton and Prince have both won championships and could put that Bulls team over the top with their experience. They are also contributing still, even with their ages getting up there. Ben Wallace is in the same boat, and would serve as a perfect replacement for Noah. Rose, Hamilton, Prince, Boozer, Noah (Wallace for now) is much better than what they're doing now.

Deng is a good player who is overpaid, but can still contribute a lot. Ronnie Brewer is a good bench player with a lot of potential, and what team in the league couldn't use a guy like Korver?

The Bulls become contenders and the Pistons move another step forward in their rebuilding stage.