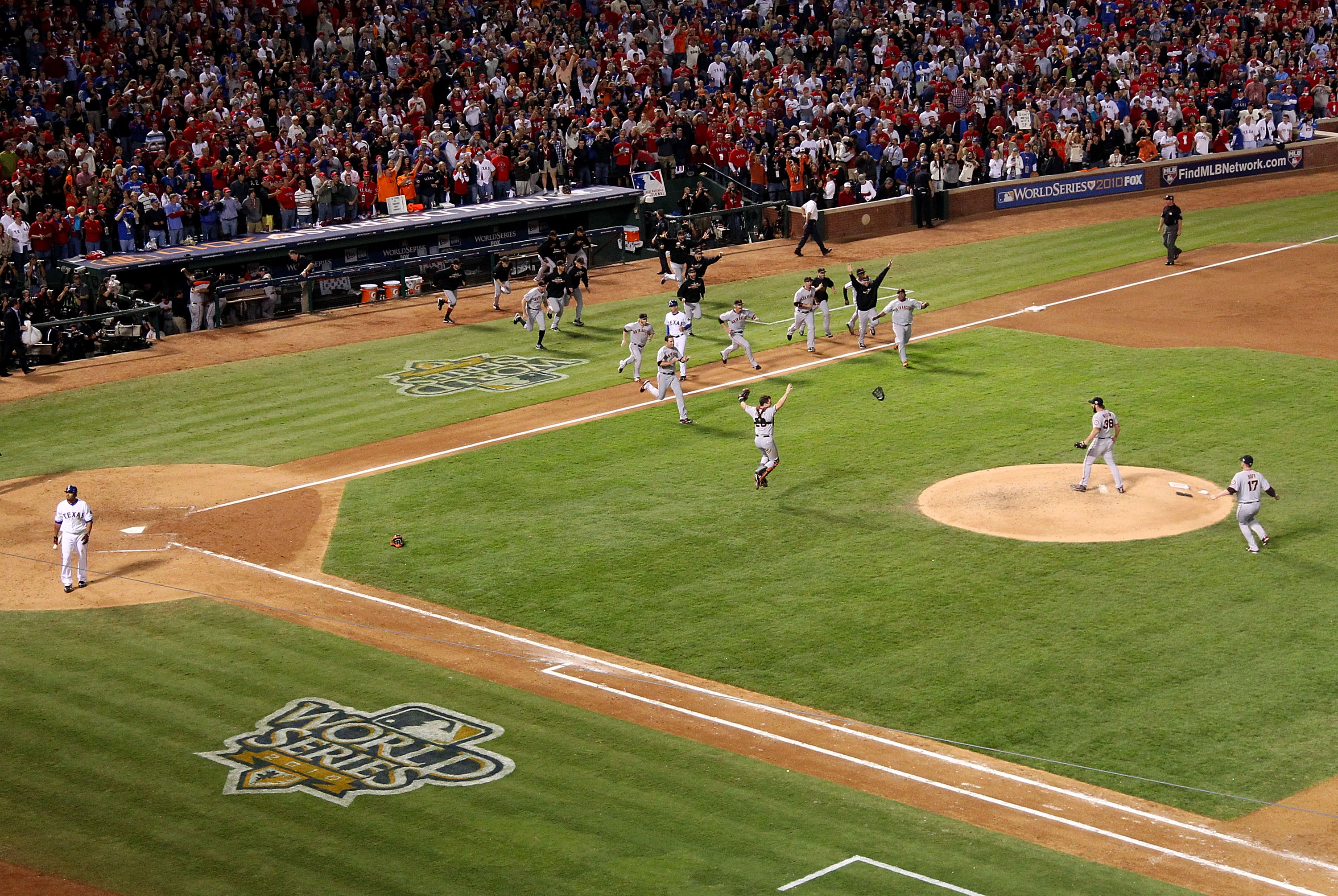 It was 1954 when Willie Mays made "The Catch" and propelled the New York Giants to a four game sweep of the Cleveland Indians in the World Series. In 1962, it was a well played Bobby Richardson that broke hearts in San Francisco after he snagged a Willie McCovey liner in the first appearance of the San Francisco Giants in a World Series. It was the Loma Prieta earthquake that stole to show of a four game sweep by the Oakland A's in the 1989 Battle of the Bay. And it was a game ball given to Russ Ortiz in the 2002 World Series that was the last good moment for San Francisco in a crushing defeat at the hands of the Angels.

But all is forgiven, at least for the next 4 months, because the Giants are sitting on top of the baseball world, propelled by one of the most dominant pitching staffs of all time and a three-run blast by the man with no left bicep, Edgar Renteria.

Let us take a closer look at the game which lifted the 56 year drought off of a team, a city, and a fan base and which shocked the world.

Innings 1-6: The Matchup Everyone Had Been Waiting For 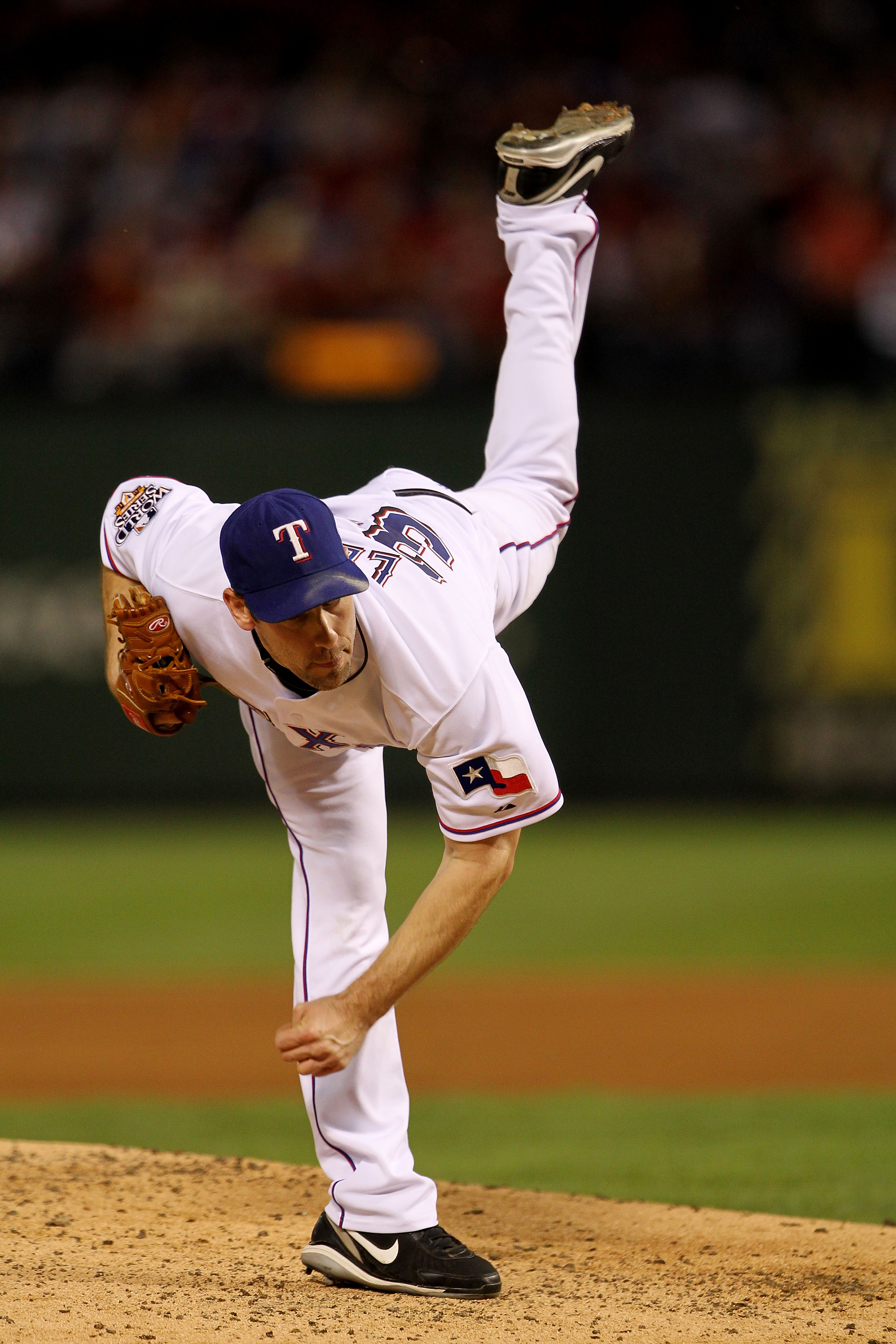 In the first game, the first Lincecum-Lee matchup, the two combined for 10 1/3 innings pitched, with 18 hits and 10 ER given up. However, through the first 12 innings pitched between these two aces, they had allowed only 3 hits and no earned runs, while striking out 11 and only issuing one walk.

Not a single baserunner had reached second base, and it never looked like either team was going to accomplish a single threat off of either Tim Lincecum or Cliff Lee. The only ball that was hit hard was in the sixth inning by Buster Posey, and that was still about 4 feet short of going out.

Everything about what these two pitchers were doing was dominant. They struck out twelve hitters, and each had less than 75 pitches through 6 innings. No spectacular defensive plays had to be made, and there was not one comfortable at bat taken.

The first six innings were truly captivating for all fans of the pitchers duel. I have personally never seen such a dominant performance from both mound masters. Truly a spectacle, I am honored to have seen it.

Inning 7: The Swing Of The Series 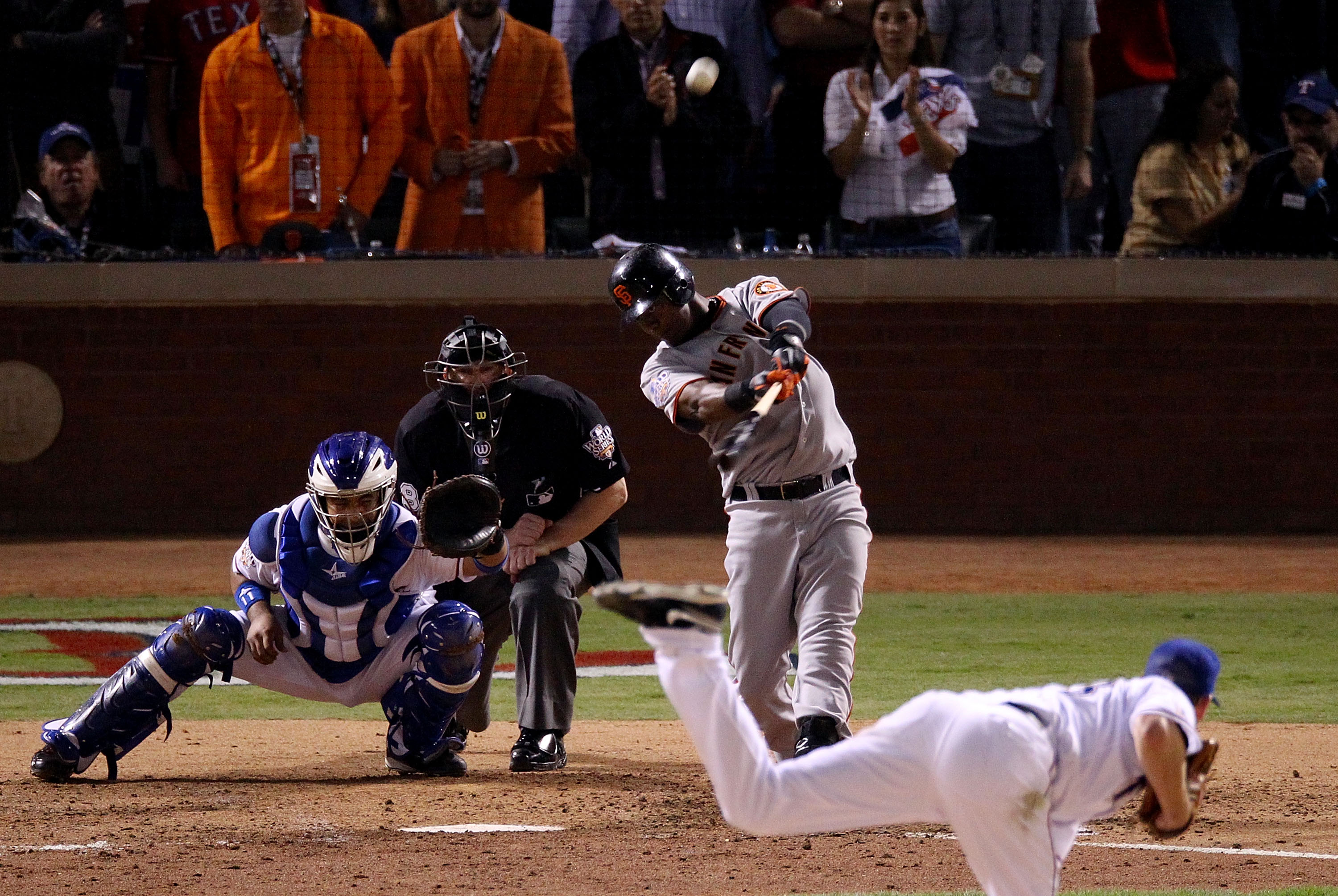 In the Giants' half of the 7th inning, a spectacular feat happened, a runner reached second base. Not only that, but there were runners on first and second with no outs, something that looked rather impossible against the arms throwing. It was then that Aubrey Huff layed down a terrific sacrifice bunt, and Cliff Lee made a spectacular play, narrowly preventing a bases loaded, no out situation.

Then, Pat Burrell, who was 0-10 with 8Ks, stepped to the plate. No shock, he struck out, possibly wasting the only scoring opportunity for either squad. Edgar Renteria was next, but before he entered the batter's box, Pat Burrell said "Pick me up Edgar", and Edgar didn't just pick up Burrell, he picked up an entire organization.

After two pitches up and out of the zone, one a cutter and one a slider, both up, and both about a foot off of Molina's target. Then, on a fastball that was meant to hit the outside corner, ended up at batting practice location, and Renteria joined an exclusive club only occupied by Yogi Berra, Lou Gehrig, and Joe DiMaggio as the only men with two World Series winning hits. Now that's a trio of ball players that any man would be honored to be in the same sentence with.

It was in the bottom of the seventh that Nelson Cruz went deep for the only Rangers run of the game. An impressive shot no doubt, but the only run that inning, as the Rangers went down quietly after that.

Innings 8-9: Closer Showdown, and The End Of An Age 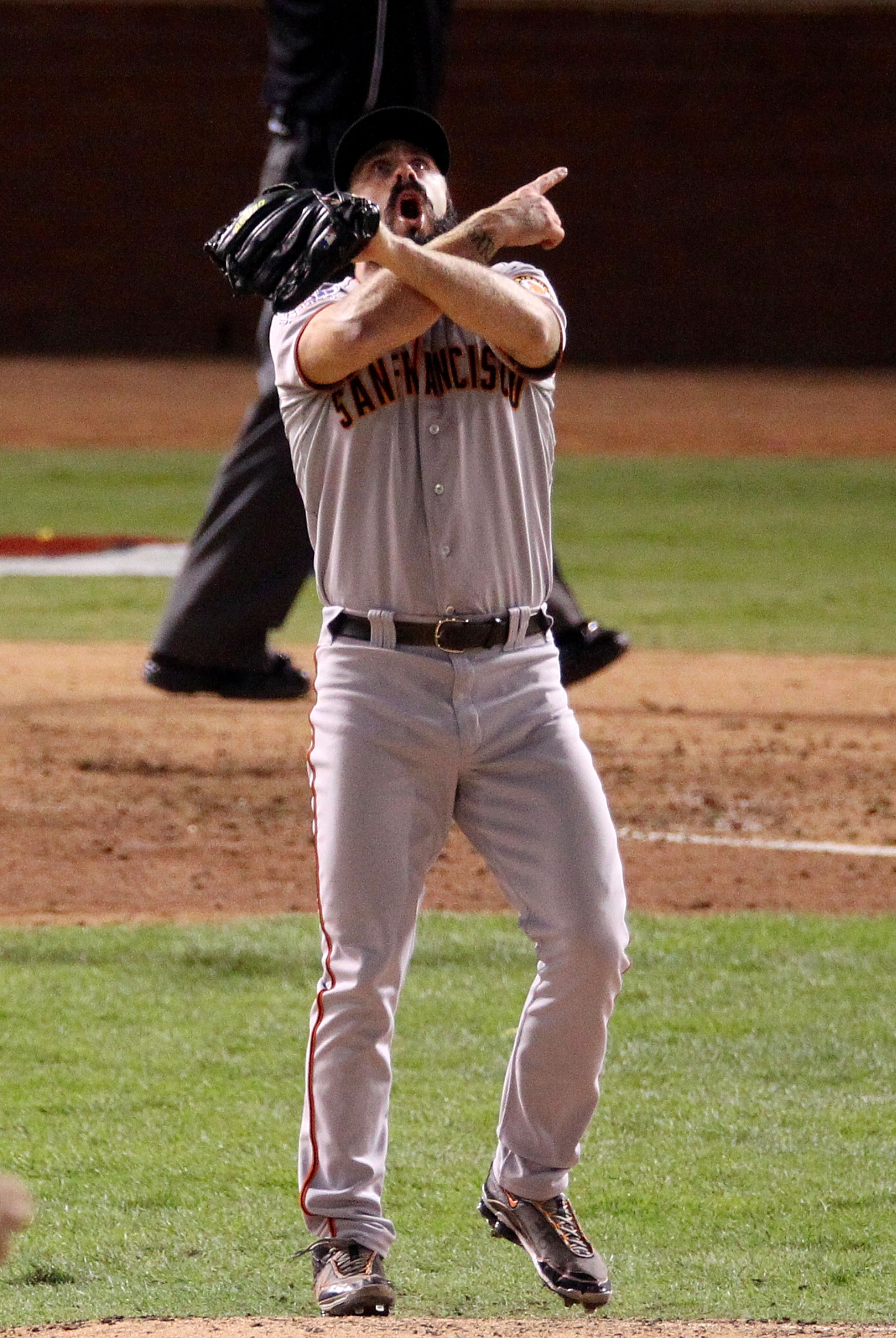 In an attempt to pull out all the stops, Ron Washington brought in a fresh Neftali Feliz in the 8th inning. Firing 98 MPH fastballs and mixing in his dirty 81 MPH sliders, there was little that the Giants offense could do in terms of insurance runs. And after another dominant 8th inning, there was little that the Rangers offense could do against Tim Lincecum in terms of a comeback.

At 101 pitches on the evening, there were many people who thought that Lincecum should have been sent back out for the ninth inning, at least to face Hamilton and Guerrero, who were a combined 0-6 with a strikeout a piece against the Freak.

However, when Bochy is in trouble, and the games are in need of saving, he calls one man, and one man only. WIIIIIIIILLLLLSSOOOOON!

And in he swooped, and closed it down with the grace, ease, and power of an All-Star closer, striking out Josh Hamilton looking, inducing a groundball to short from Vlad Guerrero, and striking out Nelson Cruz on a three two inside slider to end the World Series in thrilling fashion.

And the insuing charge from the dugout and pileup on the mound was something that the San Francisco Giants had been waiting for for 56 years. 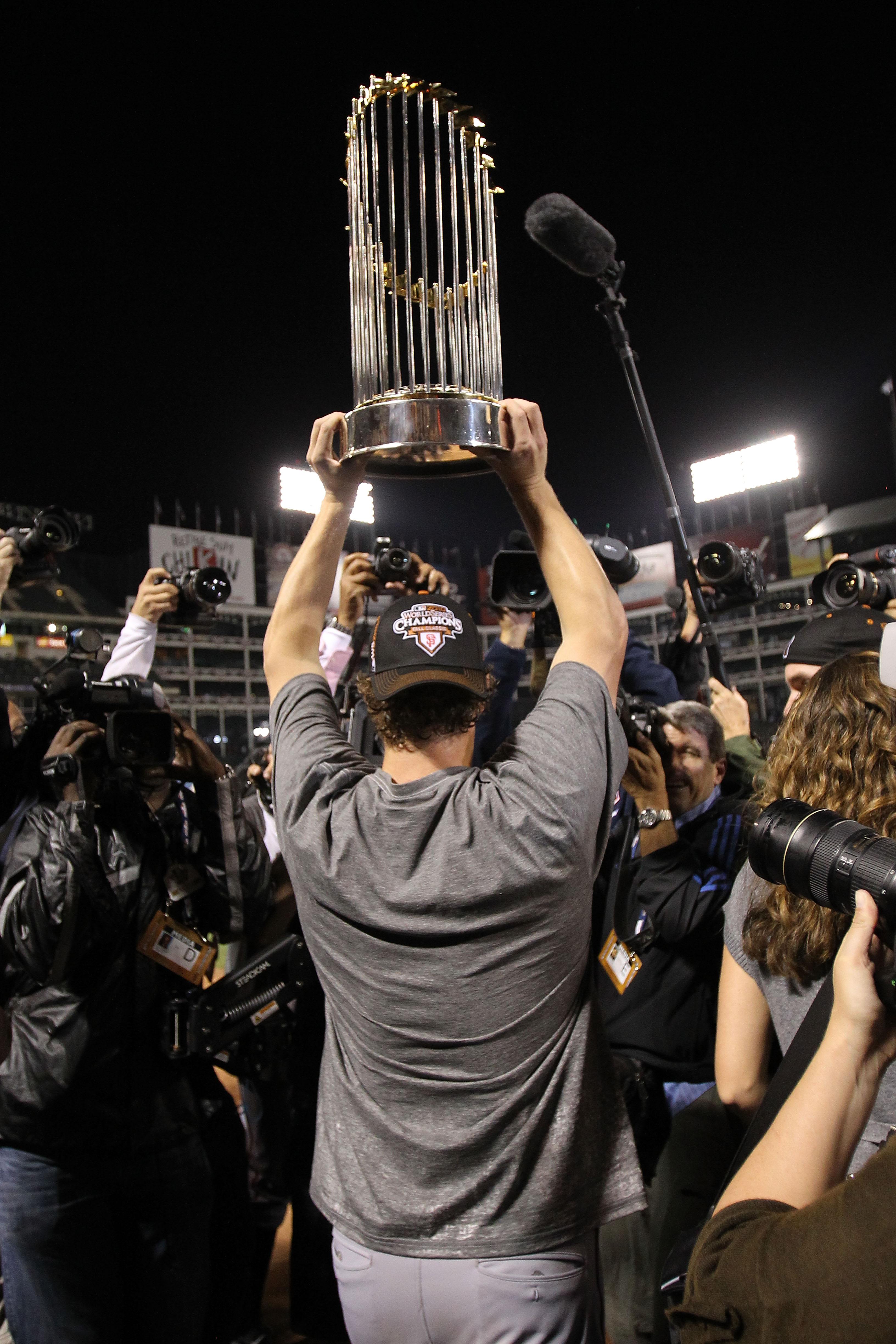 Lee was hitting his spots, mixing his pitches, commanding his cutter on the inside corner to righties. His curveball was a potent strikeout pitch, and nothing hit off of him through six innings was hit hard.

Tim Lincecum was using his fastball early in counts to gain count leverage and his offspeed late to record strikeouts and take the sting out of the Rangers' atbats. His fastball had good life and was cruising at 92-94, and it was impossible to look for any pitch in any count.

With one swing of the bat, Edgar Renteria put all the runs on the board that were needed for a dominant Lincecum and a steady Brian Wilson. And although Neftali Feliz was lights-out, he never had a lead to maintain.

Congratulations to everyone who is associated with the San Francisco Giants and all of their fans, bandwagon or not, for the Giants are on the top of the baseball world.