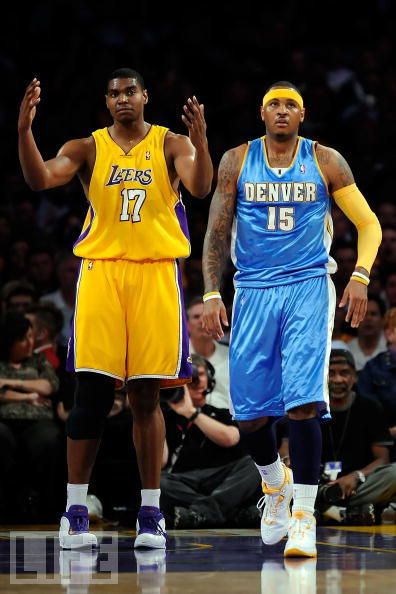 Andrew Bynum has been both a source of frustration and hope for the Lakers ever since his noticeable absence in the 2008 NBA Finals contributed to the Celtics' exploitation of the Lakers' interior.

The hope has stemmed from his potential. When healthy, Bynum has continually shown flashes of All-Star, even Hall of Fame potential.

The frustration has stemmed from his reality. Though few players in the NBA can match up to Bynum's strength, size and raw talent, Bynum is rarely able to capitalize on any of the above due to the multitude of knee injuries he's suffered over the last three seasons.

Is it time to part ways with the young center and add a proven heavyweight scorer?

Here are 8 reasons the Lakers should at least consider it.

1) They Have Bountiful Size 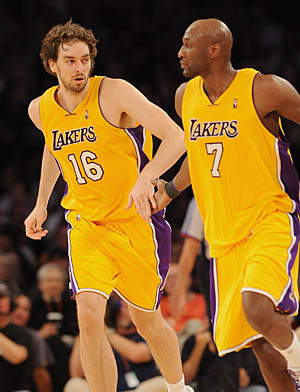 The Lakers are a team with no shortage of quality big men.

While Andrew Bynum is easily a top 5 center in basketball when healthy, the problem is that he’s almost never healthy.

The 2009 Lakers were able to weather the loss of a healthy Bynum due to break-out playoff performances by Pau Gasol and Lamar Odom and in part because they never faced a team with a offensively dominant frontcourt.

2) Bynum is Rarely There When The Lakers Need Him 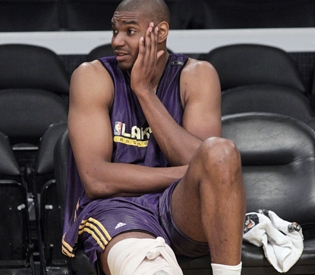 The 2010 Lakers weren’t quite as lucky as they had been in the previous season, having the Celtics present them with the dominant, smash-mouth frontcourt they hadn’t been exposed to since their original matchup with the Celtics in 2008.

Though the Lakers had the size to combat the Celtics, Phil Jackson wouldn’t allow 7-footer DJ Mbenga off the bench and quite frequently rested Gasol at the start of the fourth quarter.

With Bynum injured, the void left in the paint allowed the Celtics to take advantage quite often.

A prime example of this is when Glen Davis exploded on the Lakers in the fourth quarter of Game 4 of the Finals, totaling 9 points (18 overall) and 3 critical rebounds which helped cement the Celtics’ victory.

Though Bynum is certainly a difference maker when he’s able to contribute, he misses far too many critical games and his knees show no signs of improvement.

This certainly isn’t to fault the young center. Other than his questionable decision to put off surgery to attend a soccer event earlier in the summer, Bynum has said and done all of the right things in his effort to overcome the wear and tear the NBA has done to his body.

Still, at this point its questionable whether Bynum’s lingering injury concerns can ever be completely overcome.

3) Kobe Isn’t Getting Any Younger (Part I) 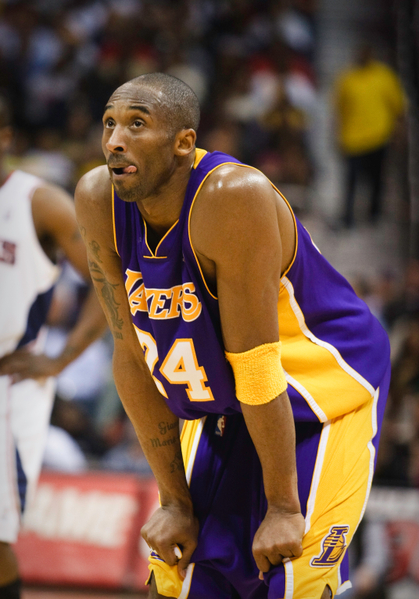 The Lakers have placed themselves in prime position to become the NBA’s next dynasty by adhering to a singular, indisputable philosophy in their front office: win now.

That said, it certainly wouldn’t hurt the Lakers to make an investment in the future, particularly if that investment also paid off in the present. Bryant is 32 years old and is entering his 14th NBA season.

It goes without saying that he isn’t the future of the Lakers’ franchise.

Through his unparalleled work ethic and conditioning, Bryant has managed to not only keep himself among the very top of league’s elite, but arguably above them.

Still, if the Lakers wish to see their success extend beyond the current semi-dynasty they have in place, now is the time to make the investments.

Bynum still has some trade value, the Nuggets desperately need to get something in return for Carmelo Anthony or risk losing him for nothing.

Although trading Anthony to a Western Conference superpower would be frowned upon by other Western Conference teams trying to contend, the Nuggets need to make peace with the fact that the loss of Anthony would remove them from that list of contenders for the foreseeable future. 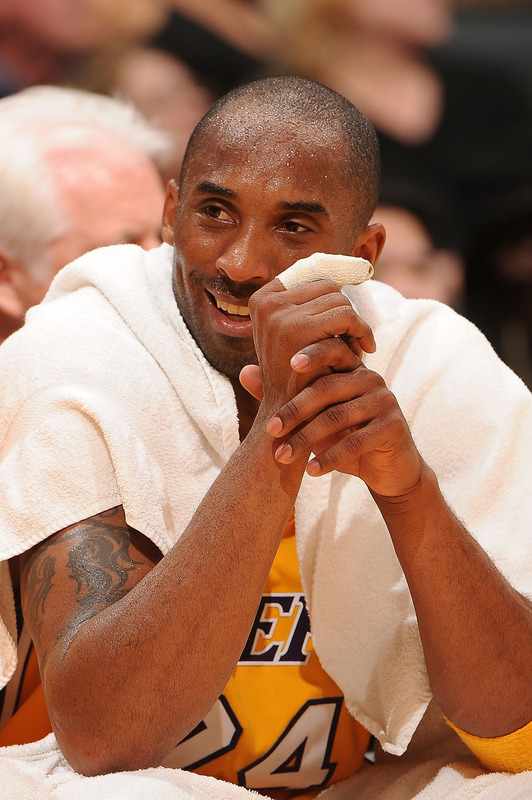 Bryant has, at most, three more seasons of MVP caliber play and is no longer equipped to deal with the demands of the regular season and remain fresh for the playoffs -- and let’s face it, how many 32 year olds are?

As things stand, the Lakers will eventually have to choose between keeping Bryant rested or pushing to earn homecourt advantage in the post-season.

Though Bryant’s health is a primary concern for the Lakers and their odds of securing the 6th string of three or more consecutive titles in NBA history, keep this in mind: the Lakers have had home court advantage in 11 of their previous 12 playoff series.

The singular time they didn’t? Their only series loss of the last three years.

But hey, why choose between Bryant’s health and homecourt advantage if you don’t have to?

If the Lakers were to trade Bynum for Anthony, Anthony would likely be able to mirror Bryant’s production closely enough for Bryant to take somewhat of a backseat in the regular season.

In the playoffs, where Bryant’s clutchness, defense, leadership and overall intangibles become more of a necessity, he takes back over the reigns more rested and healthier.

With Phil Jackson around to manage any potential locker room spats, the Lakers would hardly miss a beat.

5) The Best Defense Is Actually A Good Offense, Sometimes 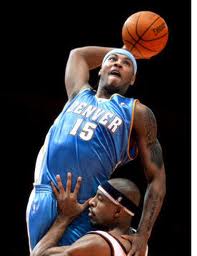 While it is also true that the Lakers’ average number of points allowed has declined, its no secret that the Lakers just don’t quite pack the same offensive punch they once did.

They often struggled to amount any offense against the Thunder and though their Finals rematch with the Celtics was a primarily defensive slugfest, the Lakers’ offense went through spurts of being completely unproductive and at times even overmatched when Bryant and Gasol needed rest.

Outside of Ron Artest’s career defining, breakout Game 7, (where he finished stifled Paul Pierce and finished with 20 points) the Lakers were wholly dependant on the offense of Kobe Bryant and Pau Gasol.

One could even argue that the disappearance of the rest of the Lakers’ supporting cast was the reason the series extended as long as it did. While the Celtics were capable of hurting the Lakers with several different weapons, the Lakers often seemed like a two-man act.

The next highest scoring average for a Laker after Bryant’s and Gasol‘s respective averages of 28 and 18 ppg was Ron Artest’s 10 ppg.

After contextualizing Artest’s average with the big boost he received with his Game 7 performance, you realize just how poorly the rest of the Lakers performed on the offensive end throughout most of the series.

Anthony’s presence would rectify the Lakers’ lack of consistent offensive threats in crunch time and prevent defenses from keying off on Bryant and Gasol.

6) The Lakers May Not Get Another Chance At Anthony 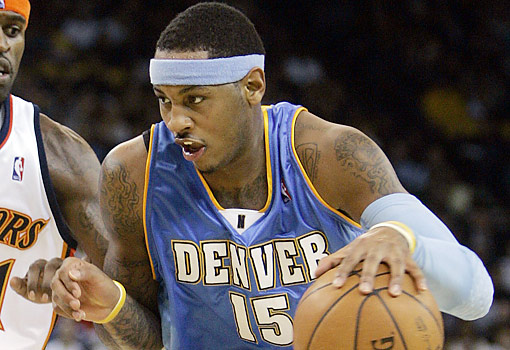 I’ll be the first to admit that Anthony isn’t a once in a lifetime player (he’s more like two or three times a generation).

But even by those standards, that means that only 2 or 3 teams are going to wind up with a player in Anthony’s league.

The Lakers, frankly, got lucky with Bryant. Though he was a high school phenom and once led the league in points off the bench, not even the biggest optimists predicted that Bryant would become what he is today.

Though the Lakers franchise has made a name for itself in garnering some of the biggest names and talents to have ever played the sport, one cannot assume that their success will continue in the years to come.

And let’s face it: the Lakers can get another physical, inside presence before they can get their hands on another Carmelo Anthony.

On one hand, you may have noticed that the number of players hitting the 25 ppg mark has increased. Guys like Danny Granger and Monta Ellis don’t exactly have household names, but they’ve proven to be capable of hitting that mark as well.

However, Granger and Ellis both play on sub.500 teams, neither has to share the ball much and their breakout scoring performances are just that -- breakouts. Very few players have the quality to average that type of production throughout their entire career.

Though a look at the NBA’s scoring leaders during the regular season can be deceptive, the truth is that there are very few pure, elite scorers in the league.

Anthony’s one of them.

Though Bynum’s considerable potential, talent and size may take years to fully replace, it may be longer than a decade before the Lakers have the opportunity to add another player of Anthony’s caliber to their roster.

7) The Opportunity To Scratch The Nuggets Off Their Threat List 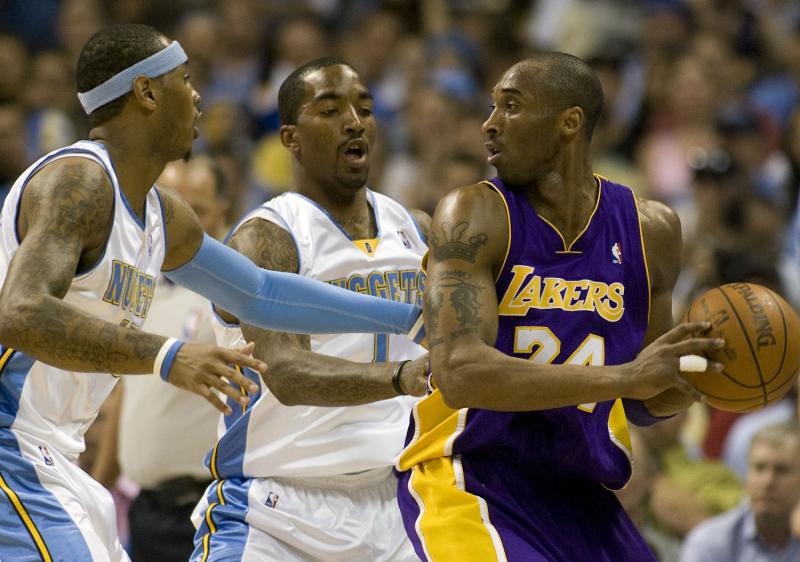 After being billed as one of the major threats to the Lakers’ championship bid, they fell in the first round to the Jazz, a team with far less potential, less size and less pure talent.

At first glance, it may seem as though the Nuggets have gone the way of the Hornets and have fallen out of contention for good.

However to believe that is to underestimate the gaping hole that George Karl left as he battled throat cancer and the Nuggets went on without him.

The Nuggets are a team of loose parts, they’re a scorer here, a shot blocker there, a defender somewhere in there.

When managed correctly, they’re a very effective, dangerous team. When they aren’t they’re a collapse waiting to happen.

Though the Nuggets certainly aren’t the biggest threat to the Lakers’ three-peat bid with Boston and Orlando hungering for revenge and the South Beach super-team adopting a “us vs. the world” mentality, they’re still big enough.

Taking away Anthony from the Nuggets would effectively take away one of the Lakers’ major Western Conference threats, leaving only the Kevin Durant-led Thunder and maybe the Rockets if Yao Ming can remain healthy.

Though a fourth consecutive trip to the Finals wouldn't be a cakewalk for the Lakers, I'm certain they would like their trip to be as turbulence-free as possible, particularly with either Boston, Orlando or Miami laying in wait. 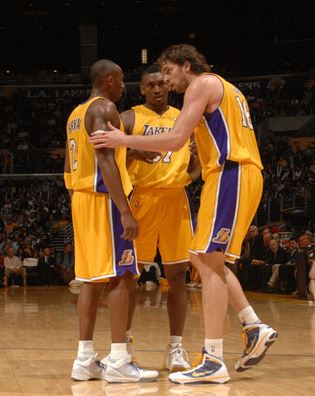 If the Lakers hadn’t traded for Pau Gasol, its doubtful that they would have won either their recent championships or Ron Artest from the Rockets.

If the Celtics hadn’t traded for Ray Allen and Kevin Garnett in 2008, its doubtful they would have won the title or attracted Stephon Marbury, Rasheed Wallace, Jermaine O’Neal or Shaquille O’Neal.

If the Heat hadn’t added Chris Bosh, its doubtful that they would have landed LeBron James.

You see where I’m going?

In a few years the Lakers will need to retool. Their current roster is built to win titles now, not meant to maintain shelf life into the future.

That’s fine because, well, as the Lakers and Celtics have shown over the last few years, the only way to win titles is to put everything into the here and now.

With that said, there’s no reason not to prepare for the future if you go about it in a way that also puts your team in a position to win now.

In adding Carmelo Anthony, the Lakers would have a major centerpiece to build around and attract future stars to their franchise.