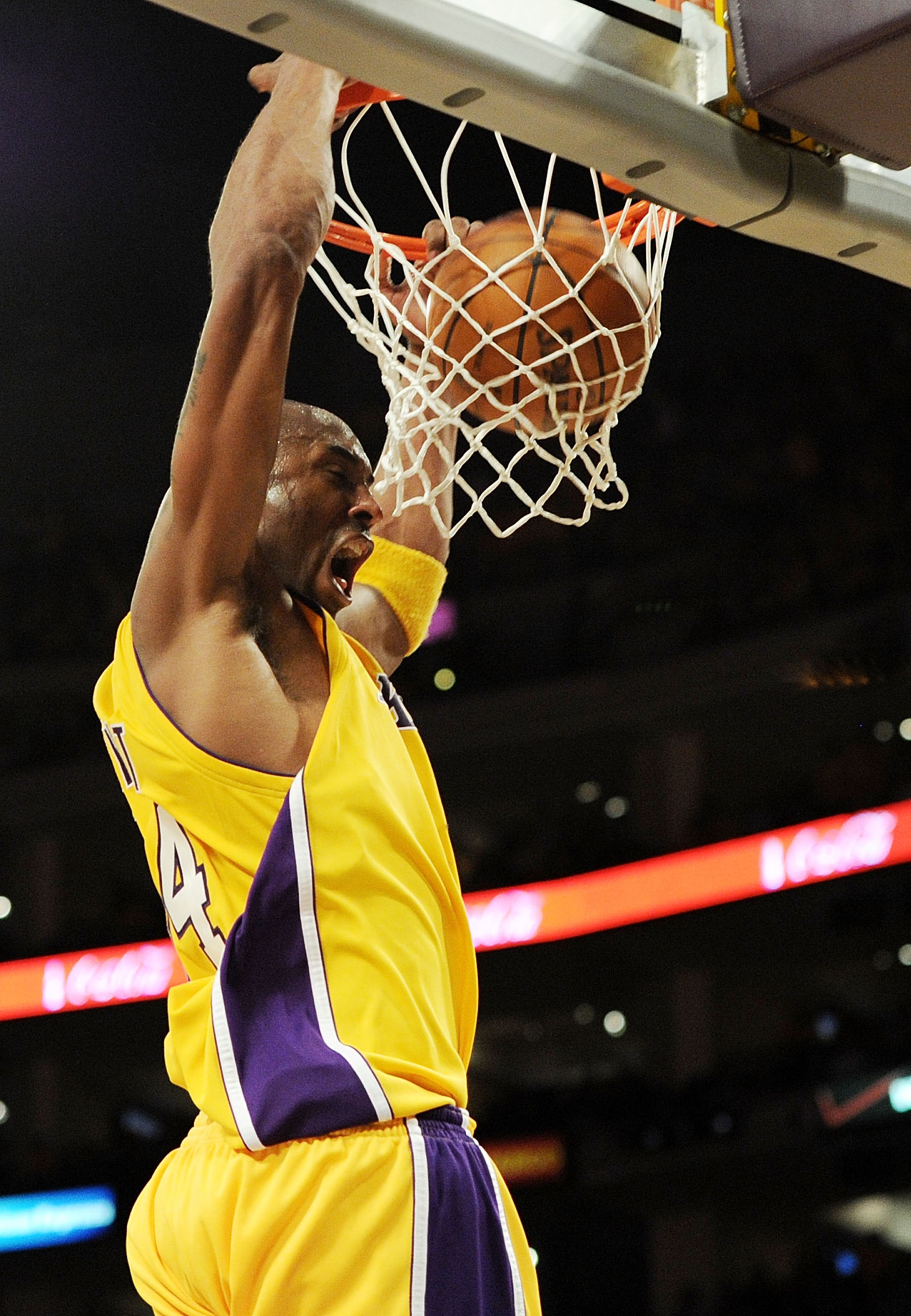 Regardless of what team you are on, everyone can agree that both teams are for two of the biggest superstars around.

No, not Team Edward and Team Jacob.

While there’s no losing in making your selection, it’s clear that James’ people have seen their idol in the news this summer way more than Bryant’s. But on August 23, The Black Mamba celebrates his 32nd trip around the sun.

So move over LeBron. Kobe gets one day in the spotlight this offseason.

There’s no doubt that Kobe is known for his clutch plays and leadership down the stretch. However, when his legs were a bit more spry and his hops hadn’t been limited by injuries, the man named after meat was renown for one thing.

His acrobatics. He made the Wallendas jealous.

In honor of the purple and gold legend’s birthday, here’s a look back at his face melting and eye-popping dunks. He’s had some remarkable plays in his time, but which is number one?

One note: The pictures chosen of Kobe are not all from the game with the dunk selected. 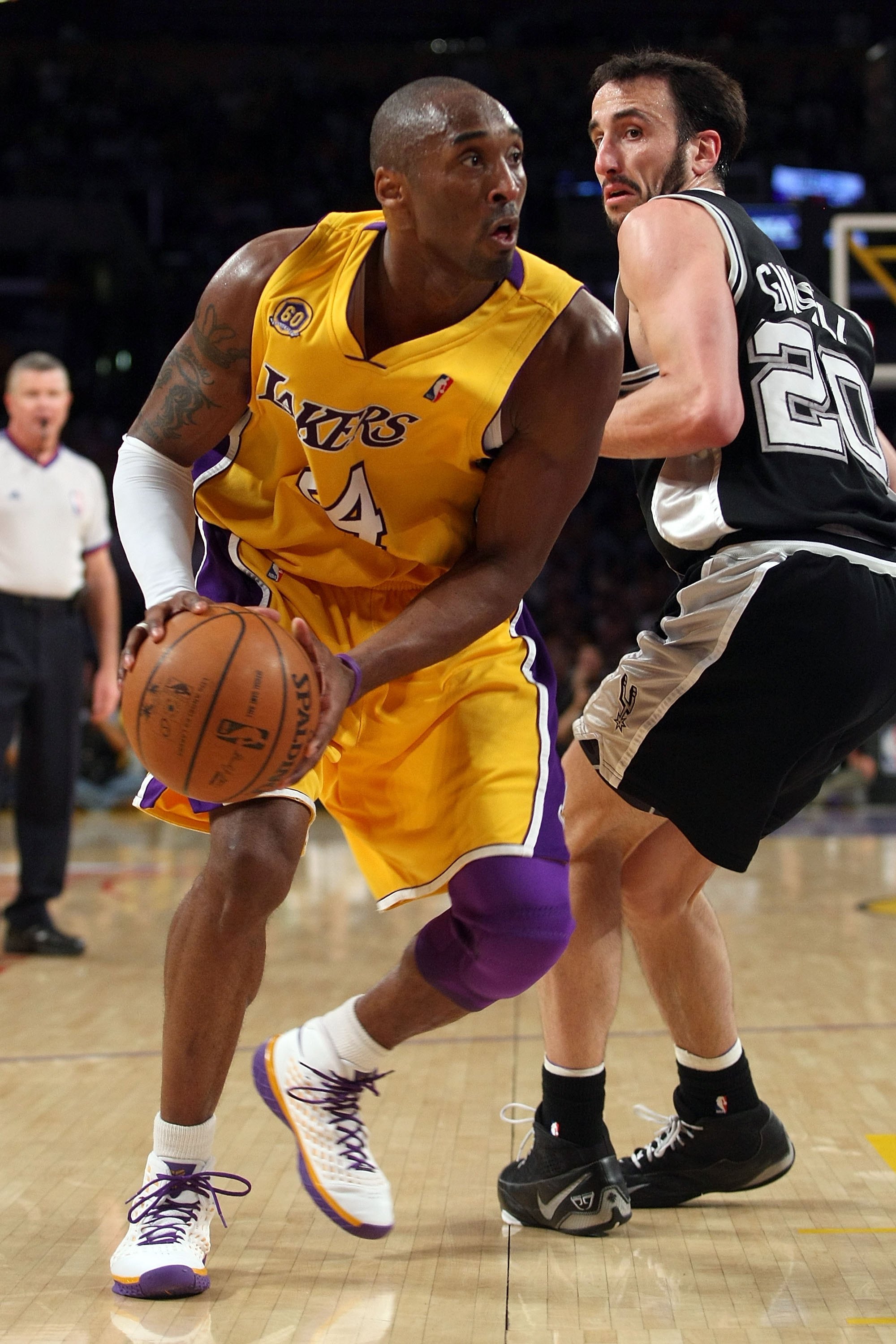 This Bryant gem may not be as well known as the others, which is sad because it may be one of his forceful ones ever.

Plus, he’s wearing a white Michael Jackson glove, which just makes the moment so special.

Apparently, the San Antonio Spurs didn’t send the memo around to the whole team that Bryant loves annihilating defenders. He gets his head up to rim level, draws the foul, and flattens his opponent with a rim-rocker.

When John Salley gets in your face, you know you’ve done it big. 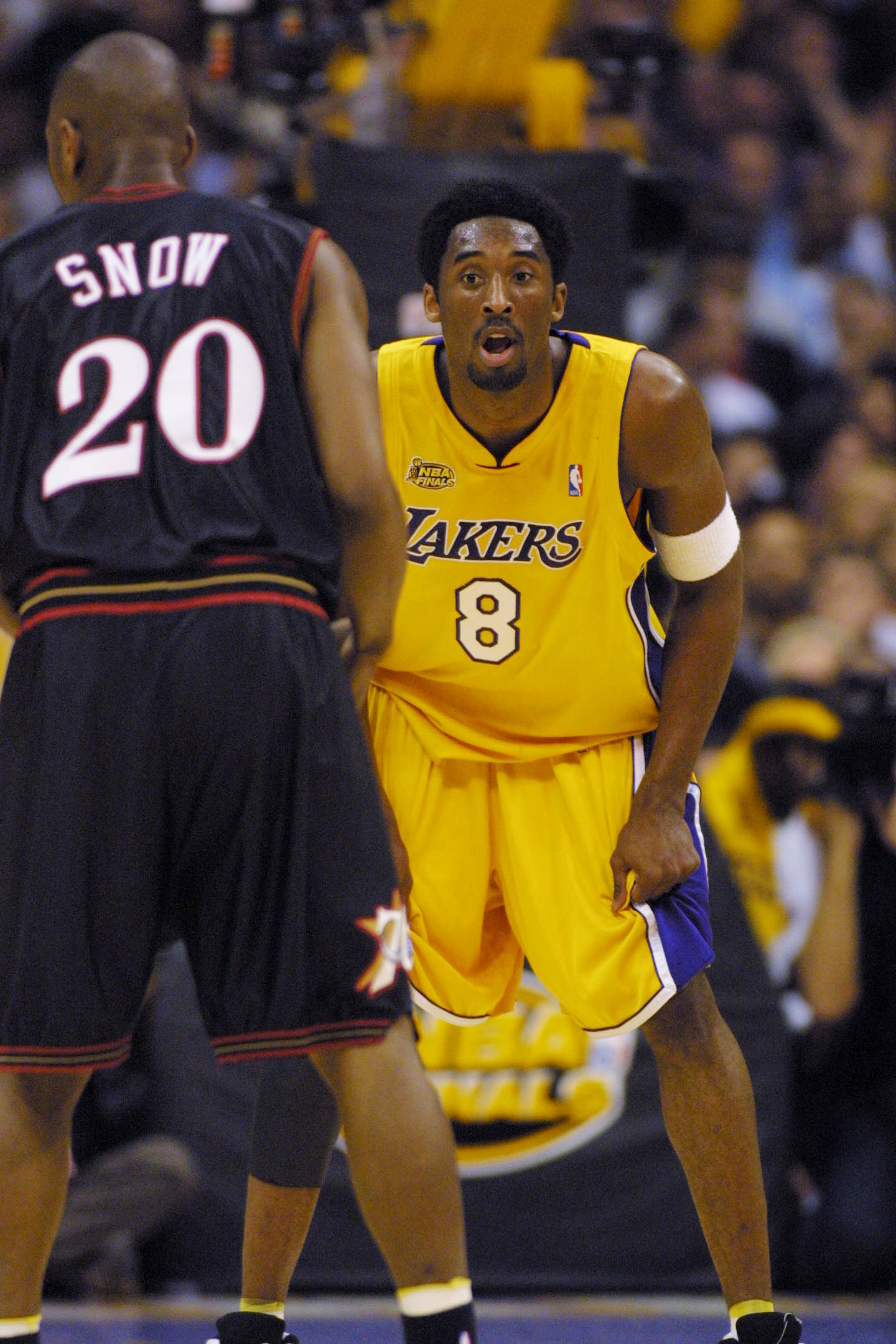 This may be the only alley-oop on this list, and for good reason. For anyone else, Brian Shaw’s pass would have just been a poor bank shot.

But for Bryant, it’s a perfect strike.

He jumps from one side of the hoop, elevates to the other, grabs the ball with one hand and puts it down with emphasis. Even a forearm in the back couldn’t stop this boss.

When Chick Hearn says, “You can go to a basketball game the rest of your life and you won’t see this play duplicated,” you know it must be special. 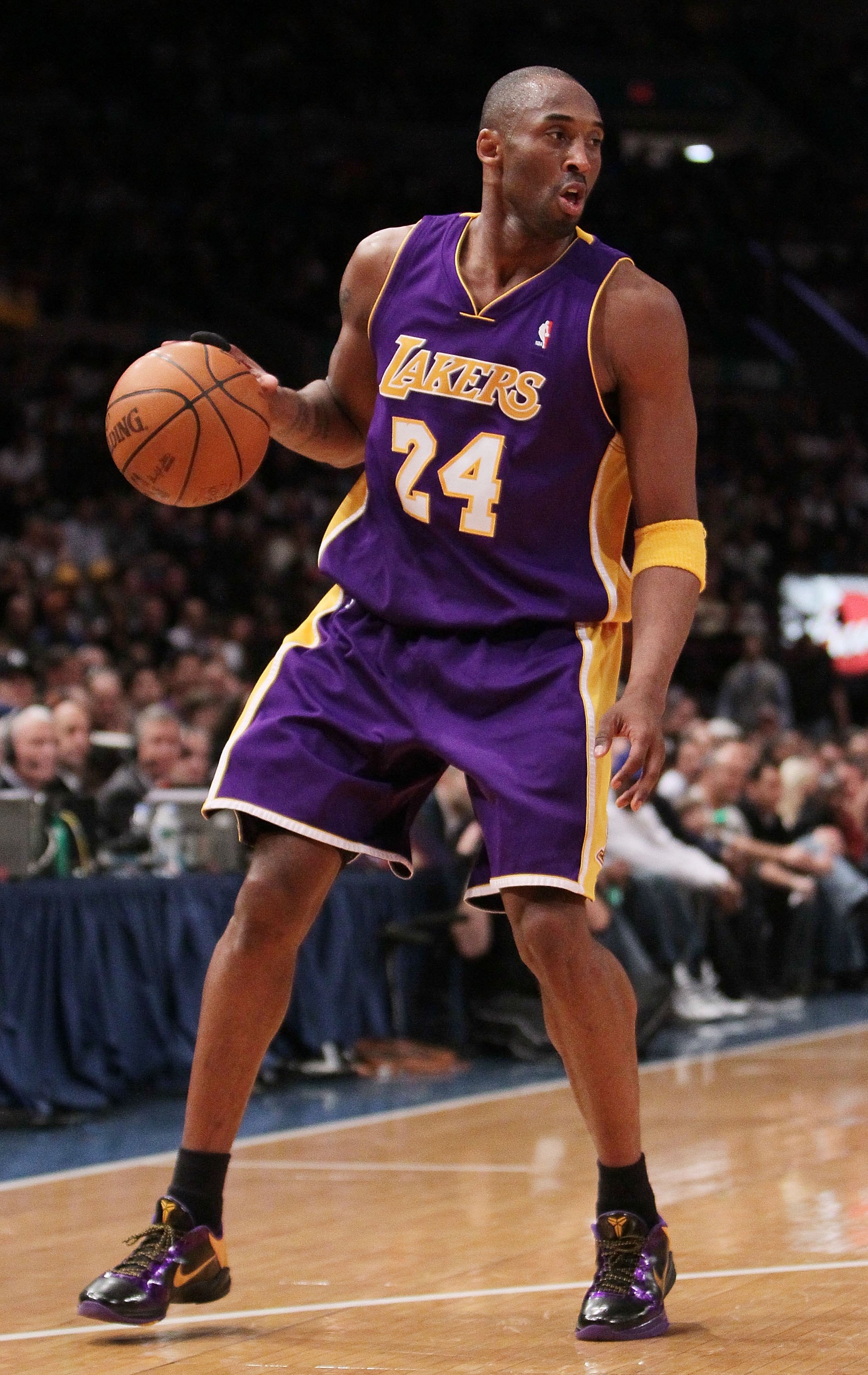 Say whatever you want about bad defense or Latrell Sprewell’s commitment to effort.

We know one thing for sure. Spree got abused like Rihanna.

Bryant takes him baseline, beats him with essential one dribble and takes off. At that moment, Spreewell wishes he stayed out of the league after his choking fiasco.

Kobe probably does too. This posterization is illegal in most states. 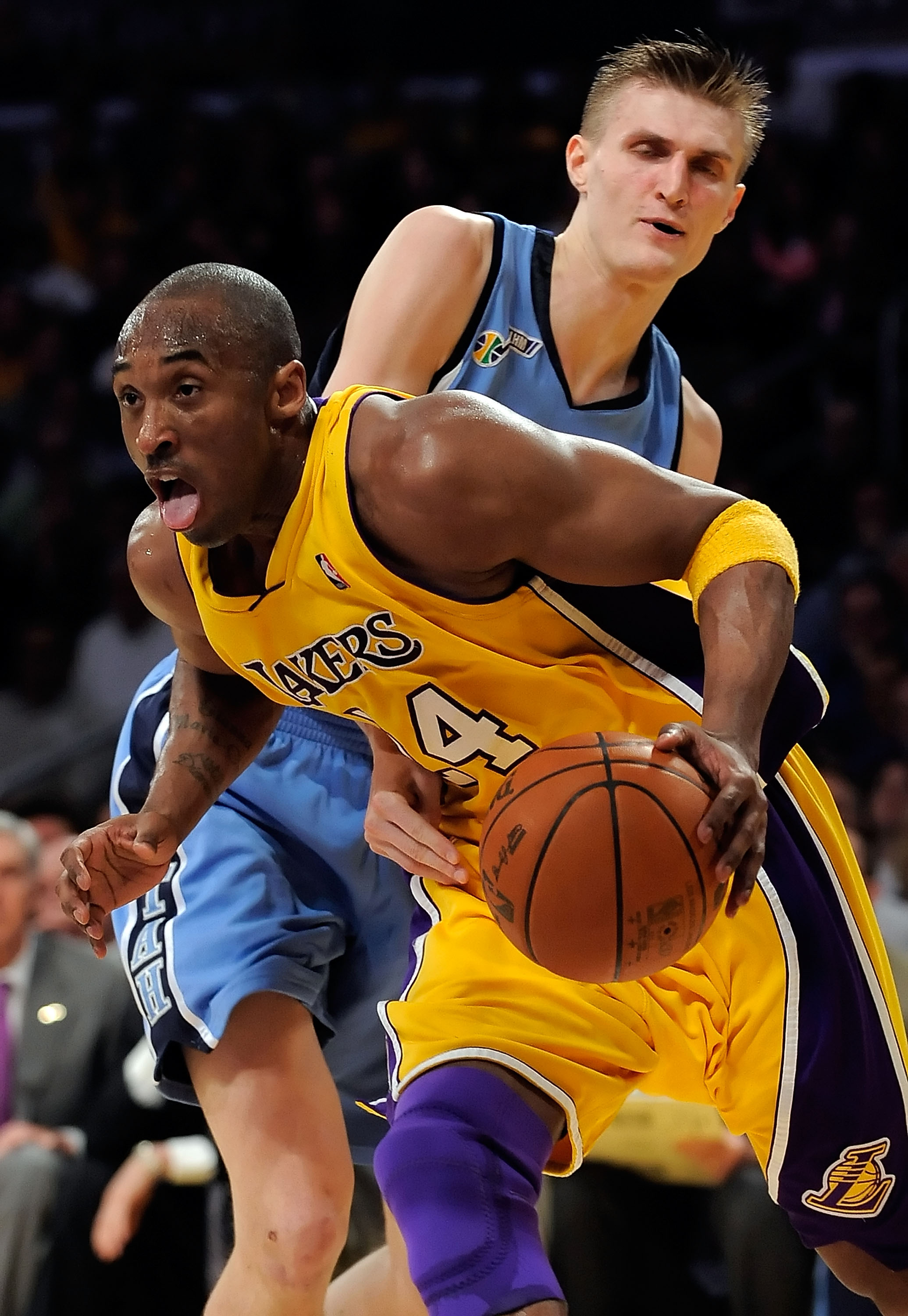 The Lakers got absolutely obliterated in this game against the Jazz, but no one cared about the score once Bryant pulled this one off.

As much as Jazz fans hate the Lakers, they still had to applaud.

The best thing about this dunk is that Kobe appears to change his mind in mid-air. He appears to be going for the double pump wrap-around, but instead switches to a 360 on the near side of the hoop.

Even the Egyptian judge gave him a 10. 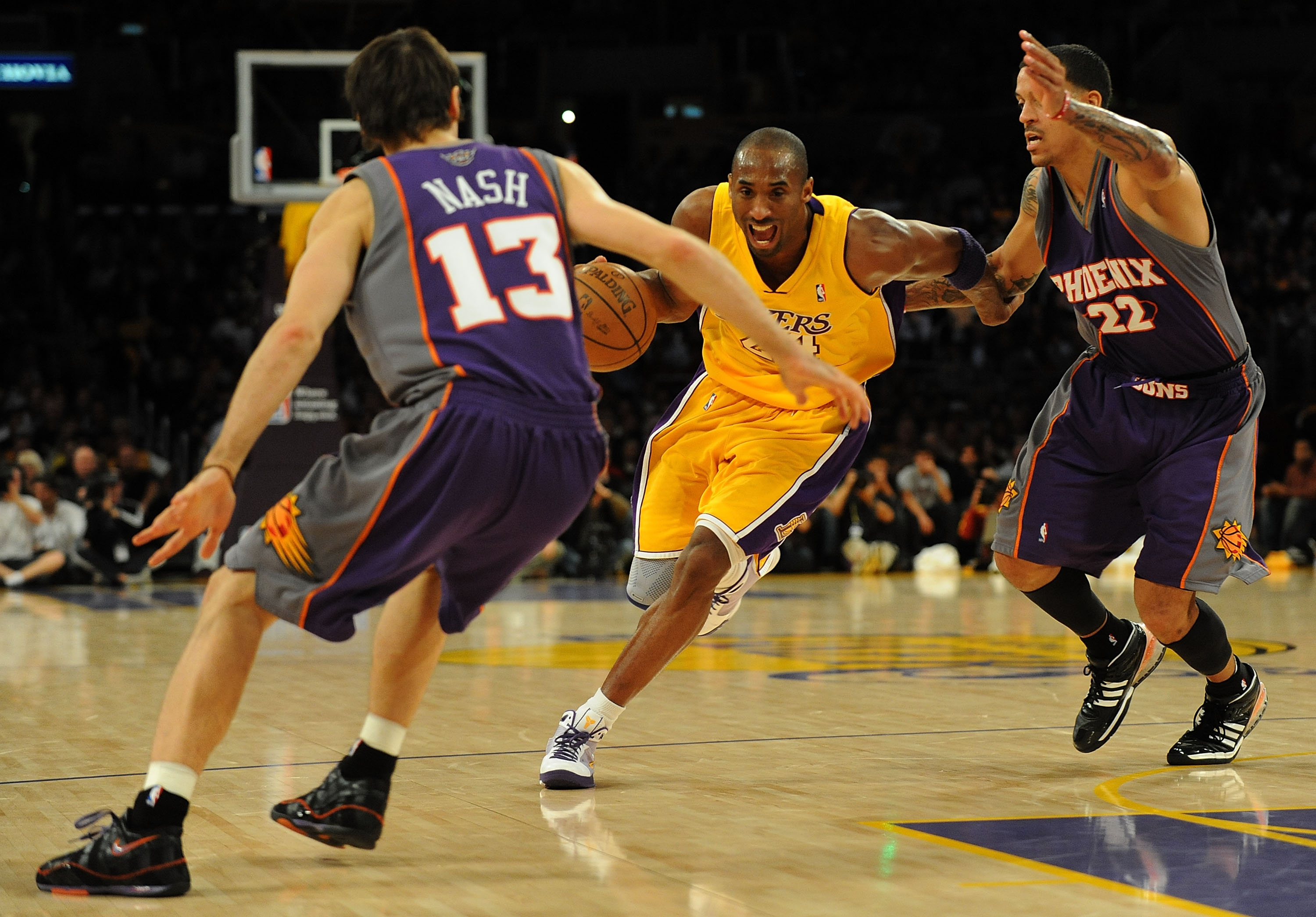 Sure, the Lakers didn’t win this series, and dunking on a relatively short white man is nothing to write home about.

First off, Lamar Odom actually hustled, so that’s a surprise. Odom slips the ball to Bryant, who uses Steve Nash’s face as a step-ladder on his way to a Superman pose.

Kobe hangs on the rim and draws the foul, and then just stares at his haters. What a man.

5. Bryant Puts the "CHRIST" in Christie 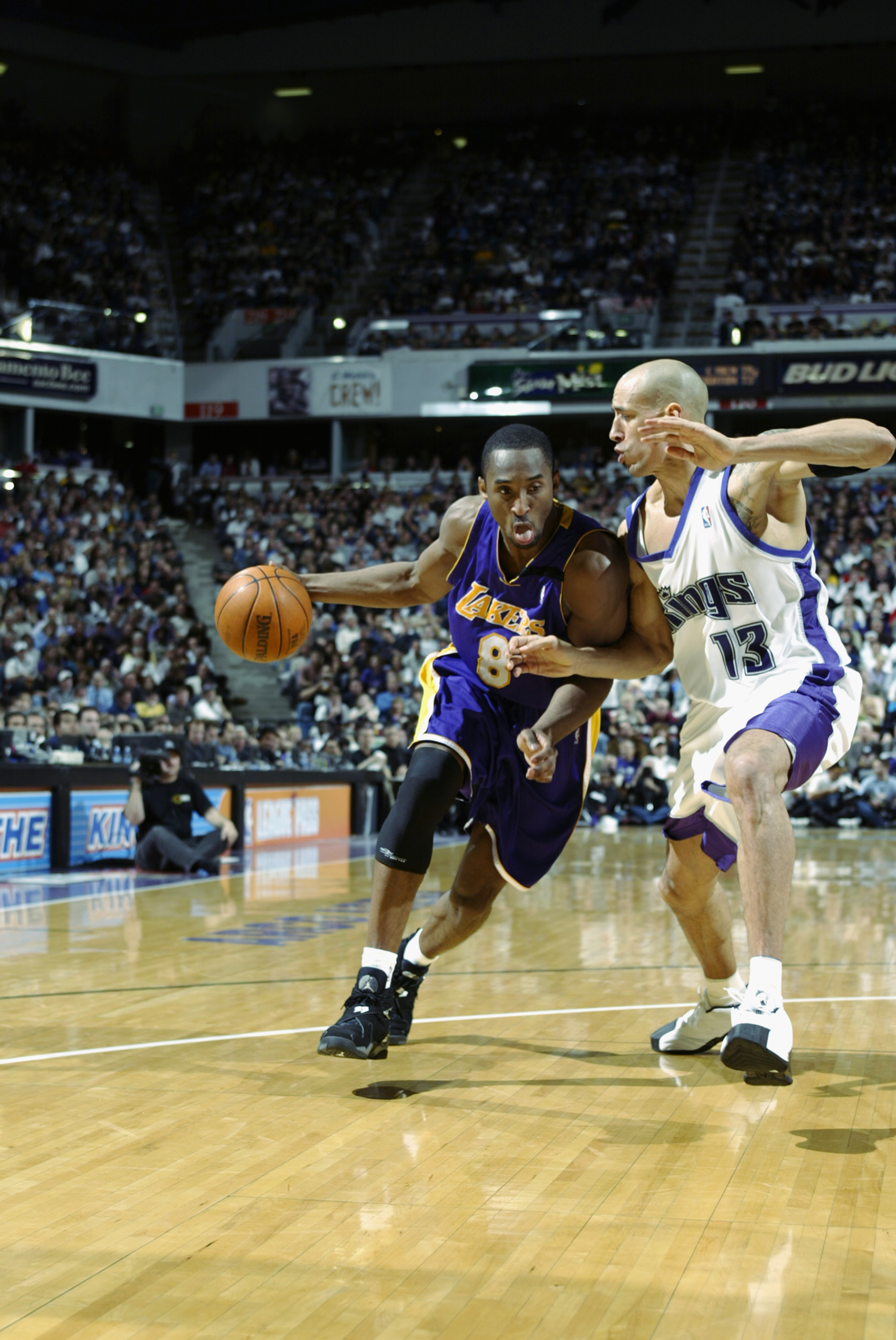 In the early and mid-2000s, the Kings and Lakers had one of the best rivalries in sports, despite how much the referees tried to deny its existence.

Bryant and Doug Christie were at the forefront of the battle every time.

This particular battle, however, was the Mamba’s. He gave wife-slave Christie the patented Kobe shimmy, took two dribbles from the three-point arc, jumped from one side of the key and landed on the other.

He then caps it with the businessman trot back down court. He doesn’t need to look back to see he took Christie’s soul. 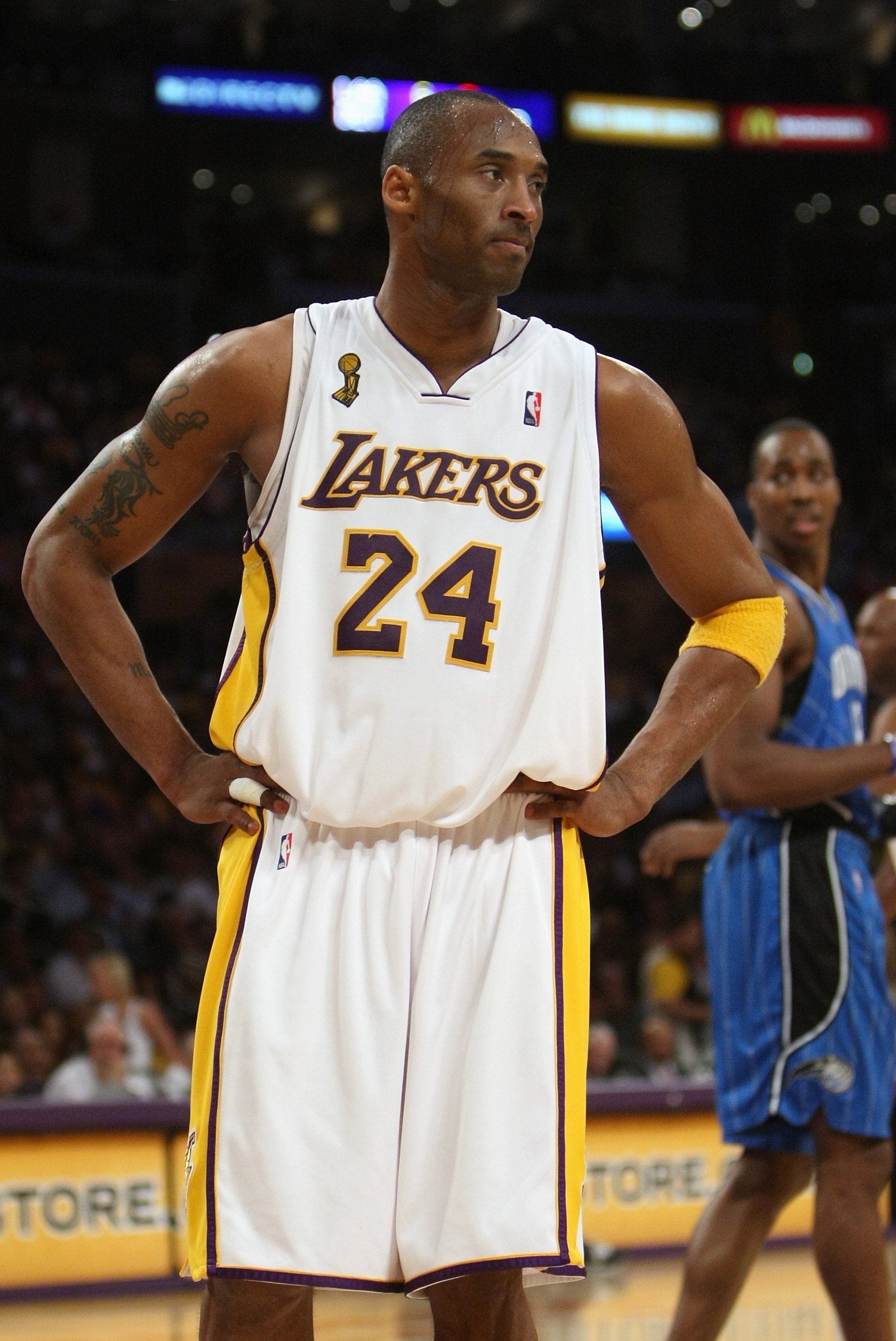 But c’mon. He can tell Kobe how his butt tastes.

Howard makes the right play, trying to take the charge on Bryant. He must not have realized that Kobe goes up with just as much force, because at 13 seconds in, he’s sitting on Howard’s face.

The best part of it all is that the announcer calls him “Josh Howard.” Which makes sense, because that is Josh Howard caliber defense. 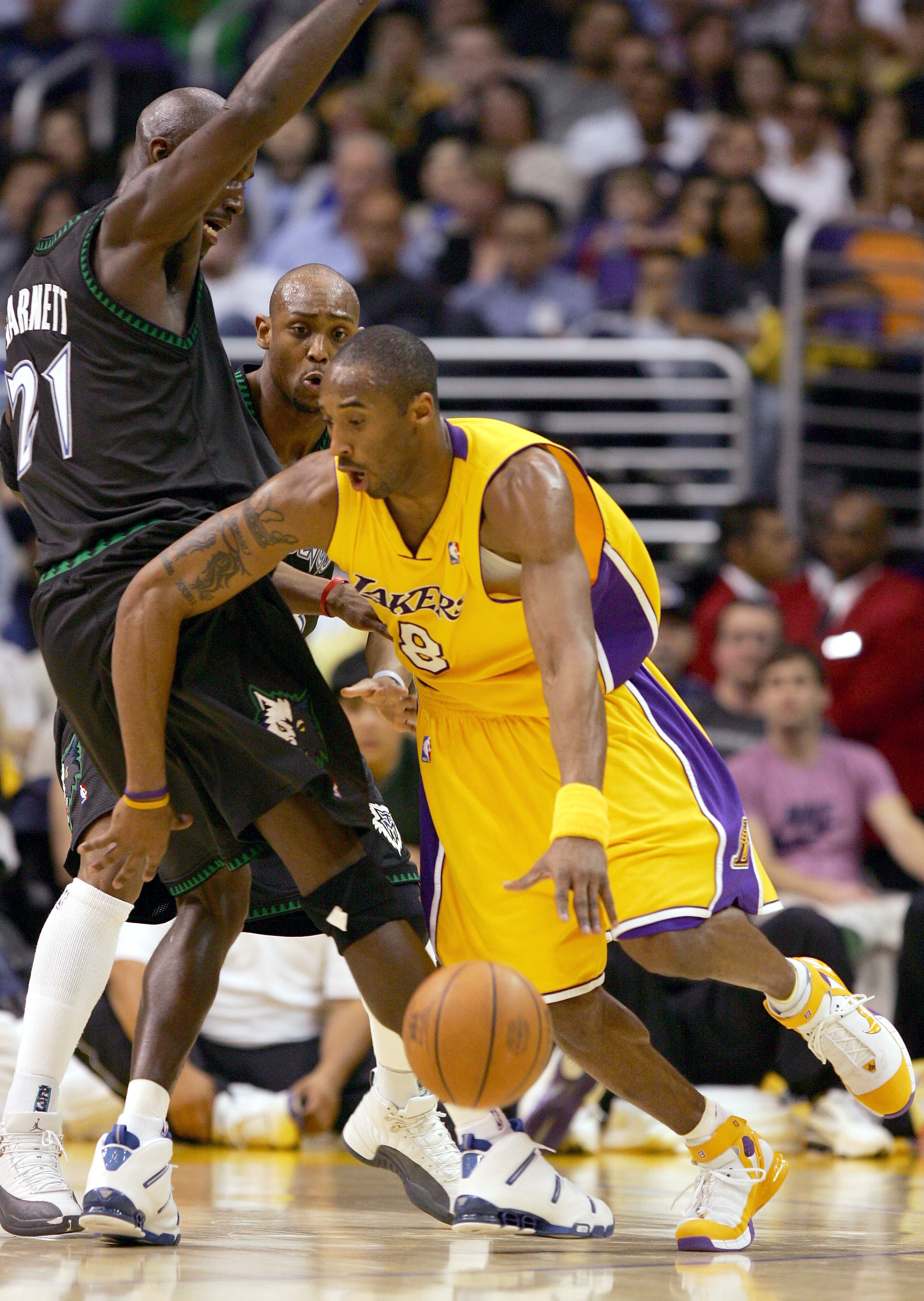 Marv Albert describes this slamma jamma with one of the best lines in announcing history:

“Kobe Bryant just sucked the gravity out of the Target Center!”

Kevin Garnett and Rasho Nesterovic tried to rotate back to Bryant. Apparently, not well enough, as Kobe took a couple dribbles, stayed behind the backboard the entire time, and threw down a windmill that made even him fall to floor.

But more importantly, why did the rotate away from him. Was Devean George really that scary? 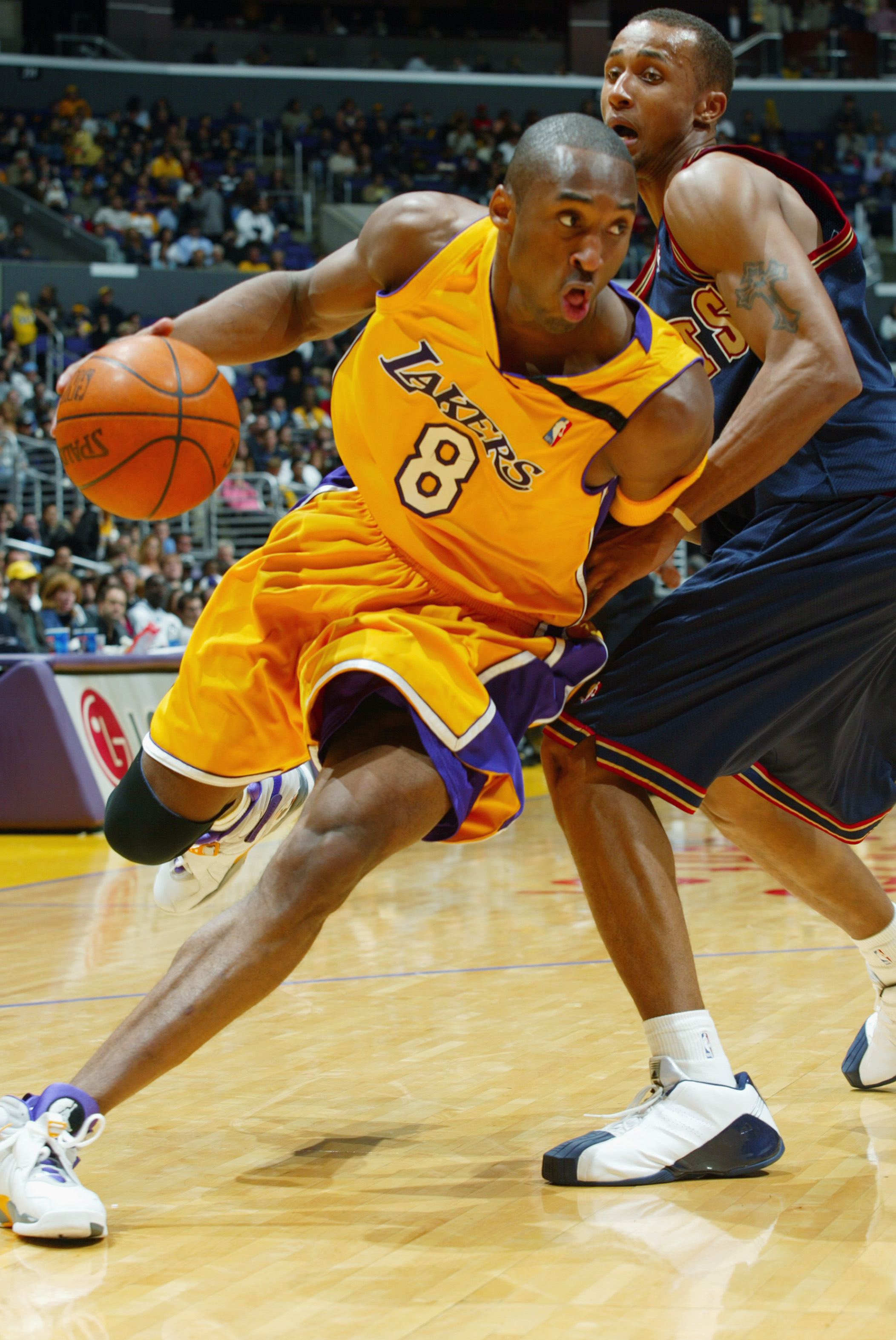 Vincent Yarbrough thought he was going to have a nice NBA career. Contribute off the bench, help his dreadful Nuggets, and pay his bills with his modest paycheck.

Too bad he will only be remembered for this.

KB24 leaks out after the free throw attempt, and Robert Horry hits him with Elway accuracy. Kobe then takes one dribble, goes around the back and goes all Thor on Yarbrough’s face.

Was it traveling? Probably. 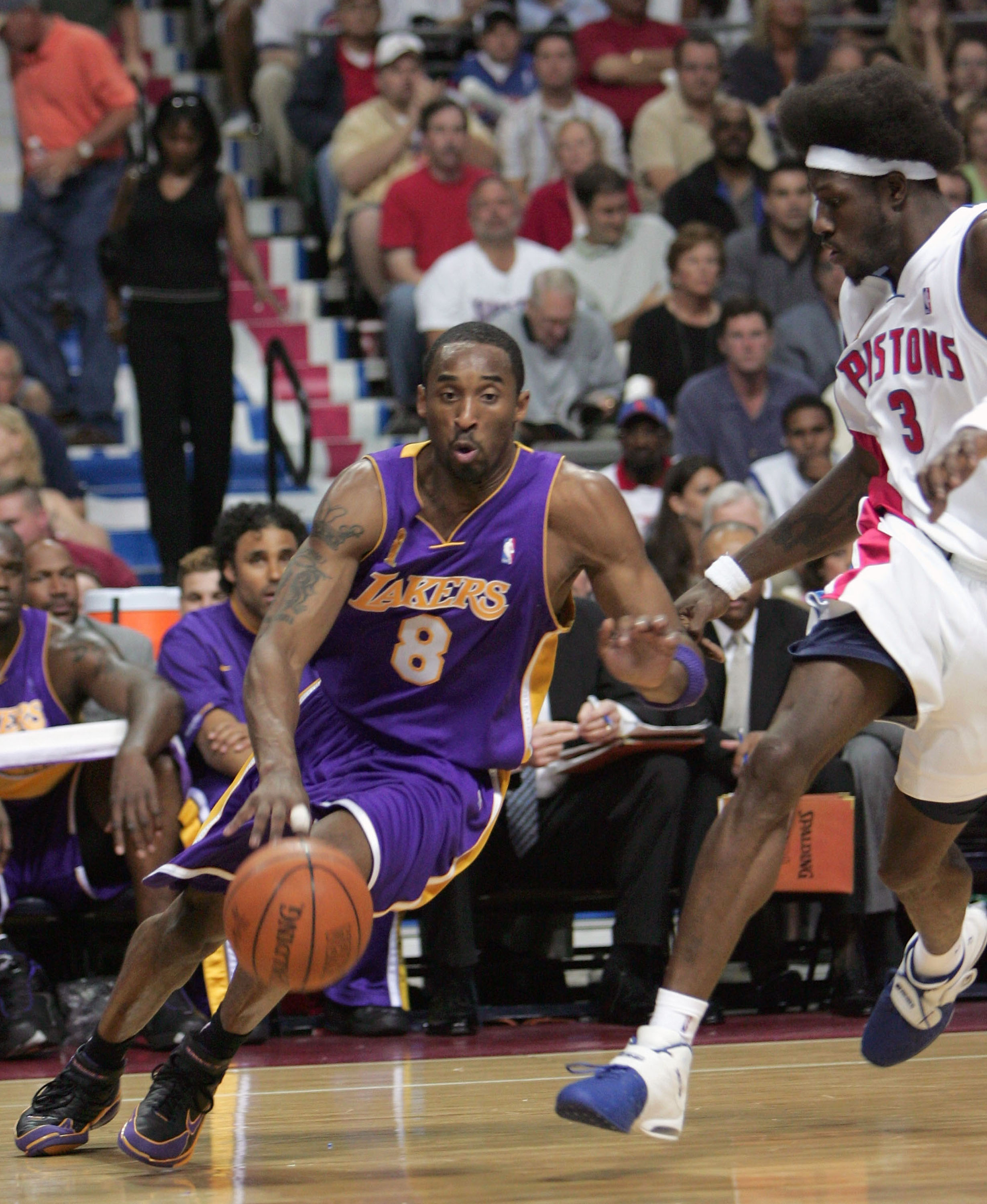 Honestly, having the legendary Chick Hearn on the call for this mammoth throw down makes it so much better.

But even if Helen Keller was commentating, this dunk will always be remembered.

Yes, it was an exhibition and Ben Wallace hadn’t become a defensive dynamo yet. Still doesn’t matter, because the entire sequence is just filthy.

The crossover, the quick drive and the lift off are magical and then he uses his left hand for the extra boost off Wallace’s shoulders.

He never did it bigger than this. But did he do it better?