It's Not Even Close! Lakers Will Top the Heat in 5 Games! 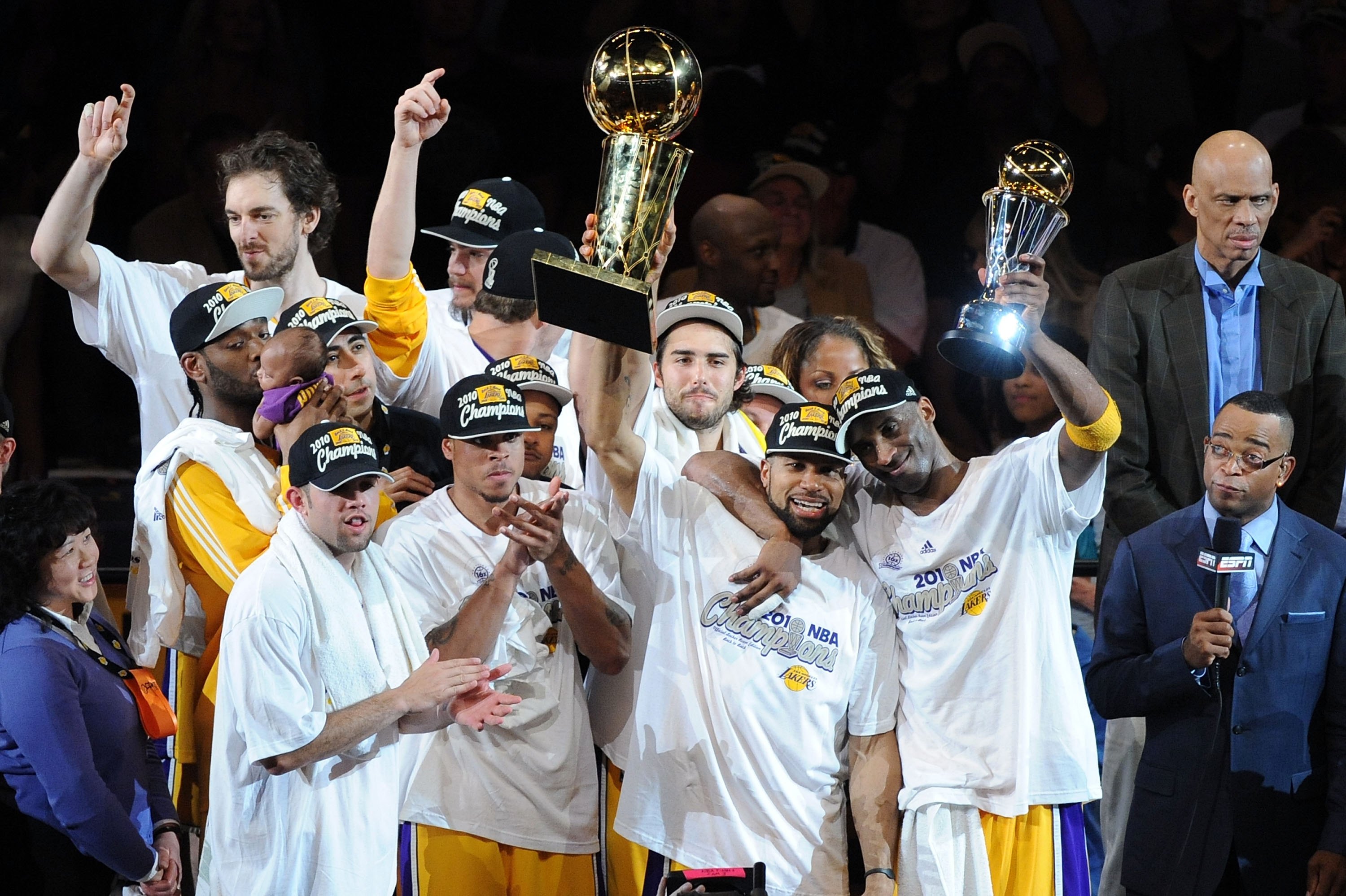 I caught a little heat (pardon the pun) for a series where I examined three teams in each conference that are capable of beating both the Los Angeles Lakers and the Miami Heat. What I endeavor to do with this piece is to examine what would happen if those two teams were to meet in the NBA Finals next season.

I hate to spoil the burgeoning bandwagon of the Miami Heat (I've been down with the Heat since 1988, what about you guys? July 8, 2010?), but they are NOT ready to take on and successfully take out, the two-time champions. It would not be a contest, despite the LeBron James and Chris Bosh additions.

As the headline suggests, the Lakers would punish the Heat in five games. Simply put, the Heat will not be ready to defeat a team that has more OVERALL talent than they have. Also, they would be facing a team that is bigger, has better quality depth, better coaching and a player that has a stronger will than anyone on the Heat roster.

Let's examine why I say this, shall we... 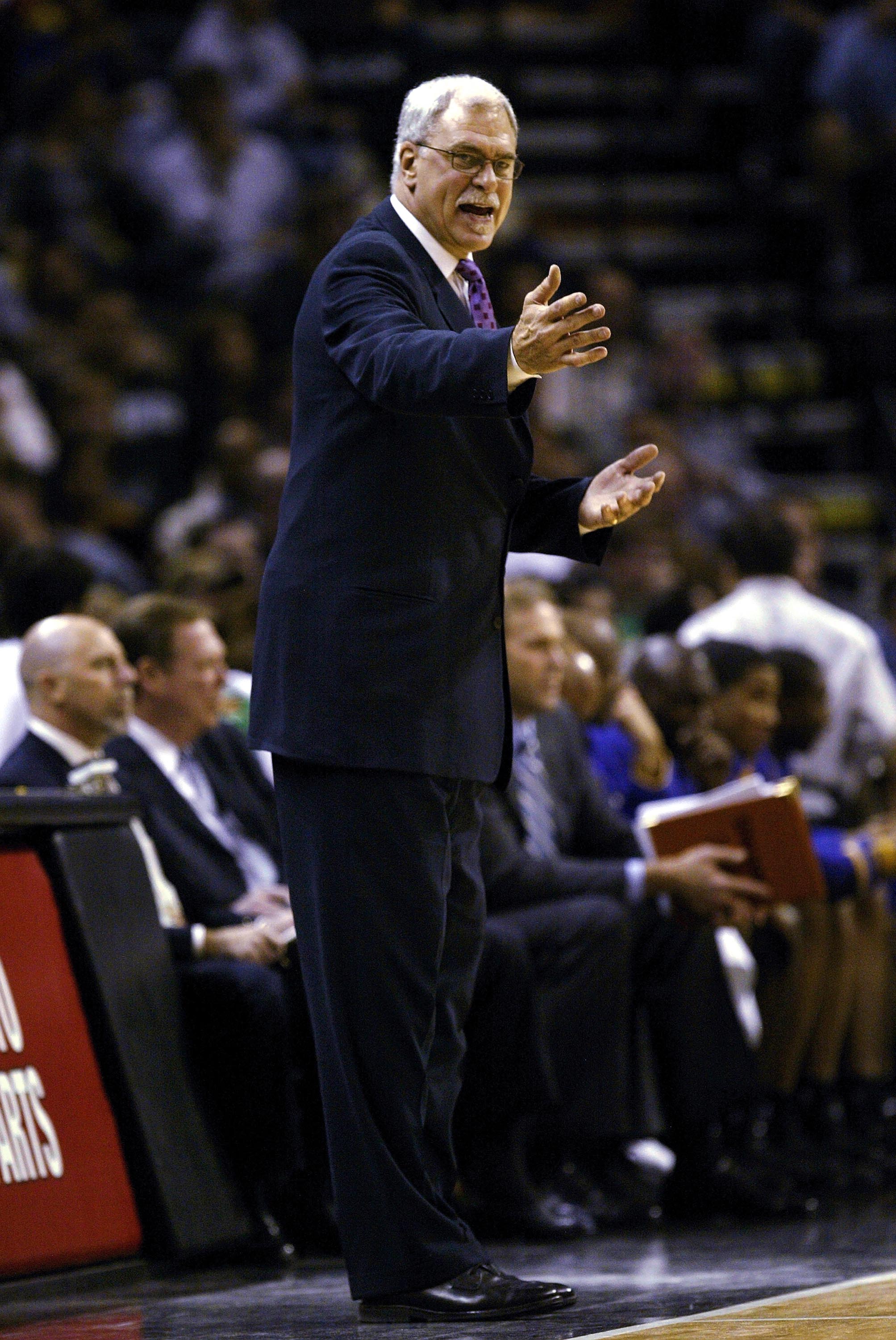 I am no fan of his, but one cannot really expect Erik Spoelstra to match coaching acumen with Phil Jacskon, can you? His 11 rings make him a coaching giant in the same conversation as Auerbach, Wooden and Lombardi.

Spoelstra may be a good coach, but come on, he is CLEARLY overmatched here!  Unless he is a budding genius in the making (perhaps), Spoelstra loses the first matchup of this series.

Please keep in mind, that Jackson has not only won 11 rings, but he has lost twice in the Finals, which means he has coached in 13 Finals total! Mindboggling, when one stops to think about it. 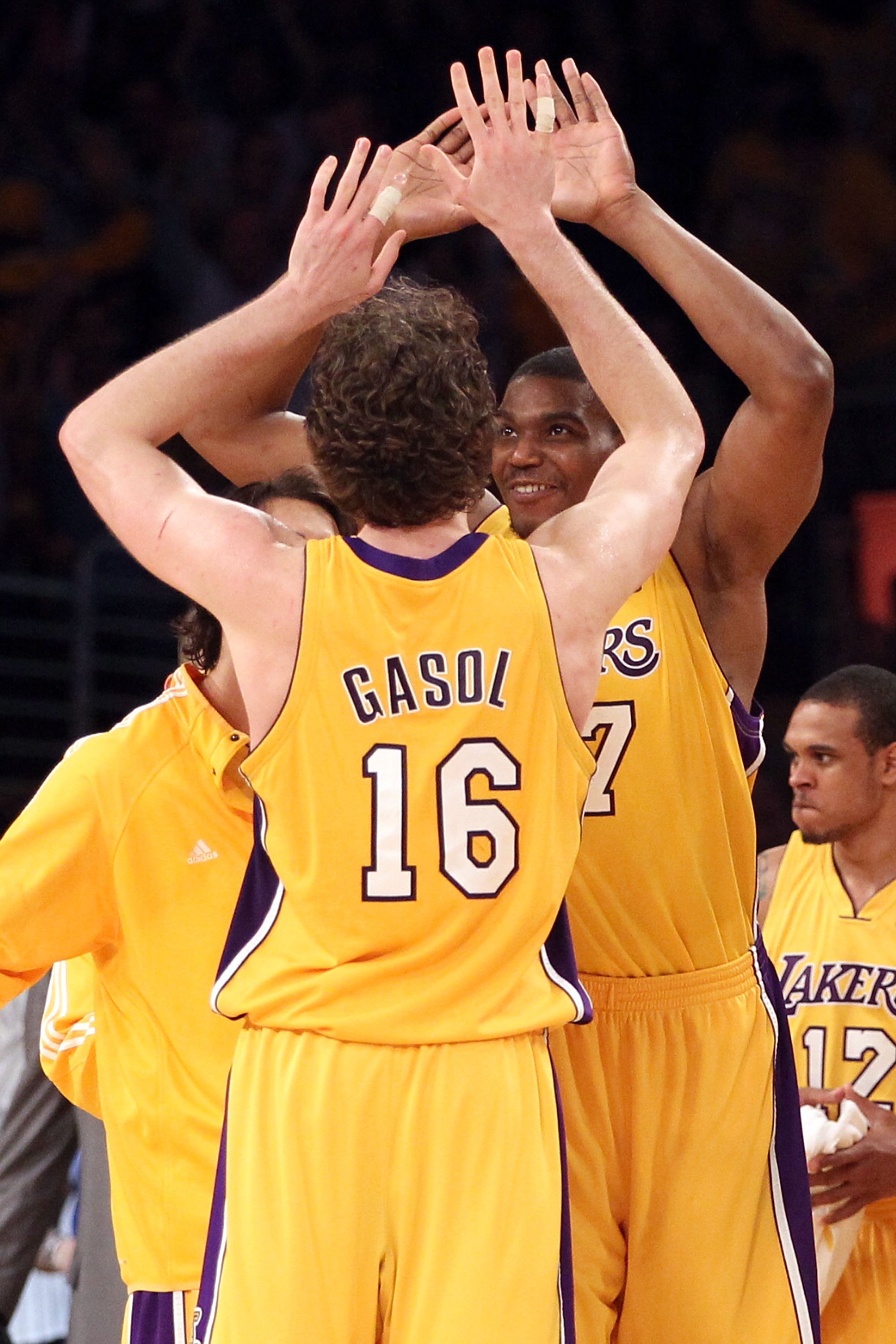 I am NOT a fan of Pau Gasol. He is still soft to me, as KG showed when he took the game to him (on his still bad knee). But that is not the point.

Between Gasol and Andrew Bynum, along with Lamar Odom, there is more size, more skilled size (and when you slide Ron Artest to the PF slot), tougher size.

This matchup should not be allowed, as it is a one-sided affair. Bosh has already stated he does not intend to bang inside, Big Z was old and slow three years ago, Anthony is not ready at all, Haslem needs 2-3 more inches against this group, and Juwan is OLDER than Big Z.

There is no comparison here. Lakers advantage, hands down. 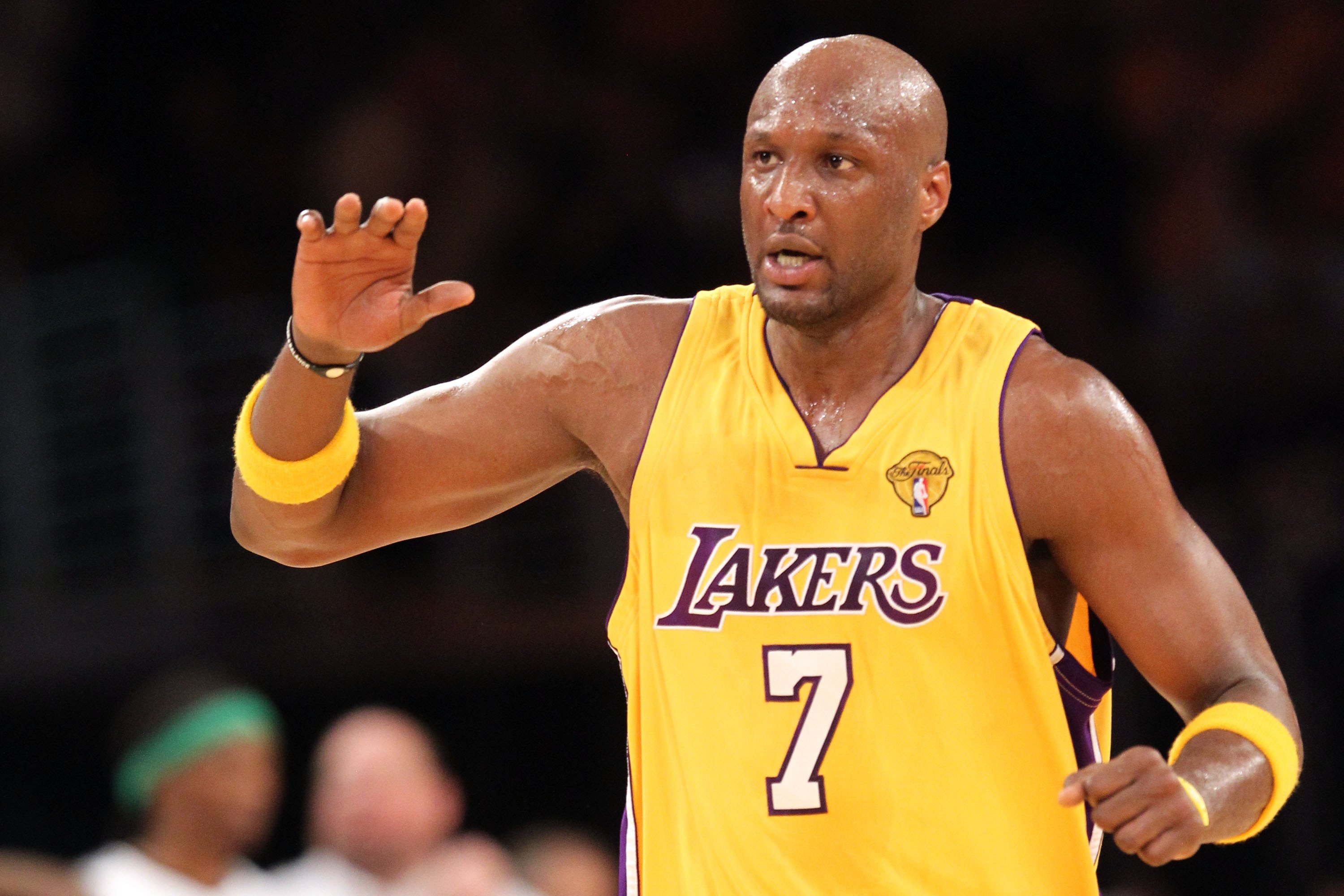 Lamar Odom, Steve Blake, Matt Barnes, Theo Ratliff vs. Mike Miller, Eddie House and co. I specifically chose not to list the others, because they are not difference makers. Any one of the Lakers players have the ability to change the game. That is what a superior bench is designed to do.

Say what you will about Mitch Kupchak when Kobe was complaining about a lack of help, but this man has turned the corner on being a good GM by making the bench even stronger AFTER winning two straight championships.

This bench can contribute to a championship this season, Miami's cannot. Just look and do an honest comparison.

Kobe is Better Than Wade... At What They Do 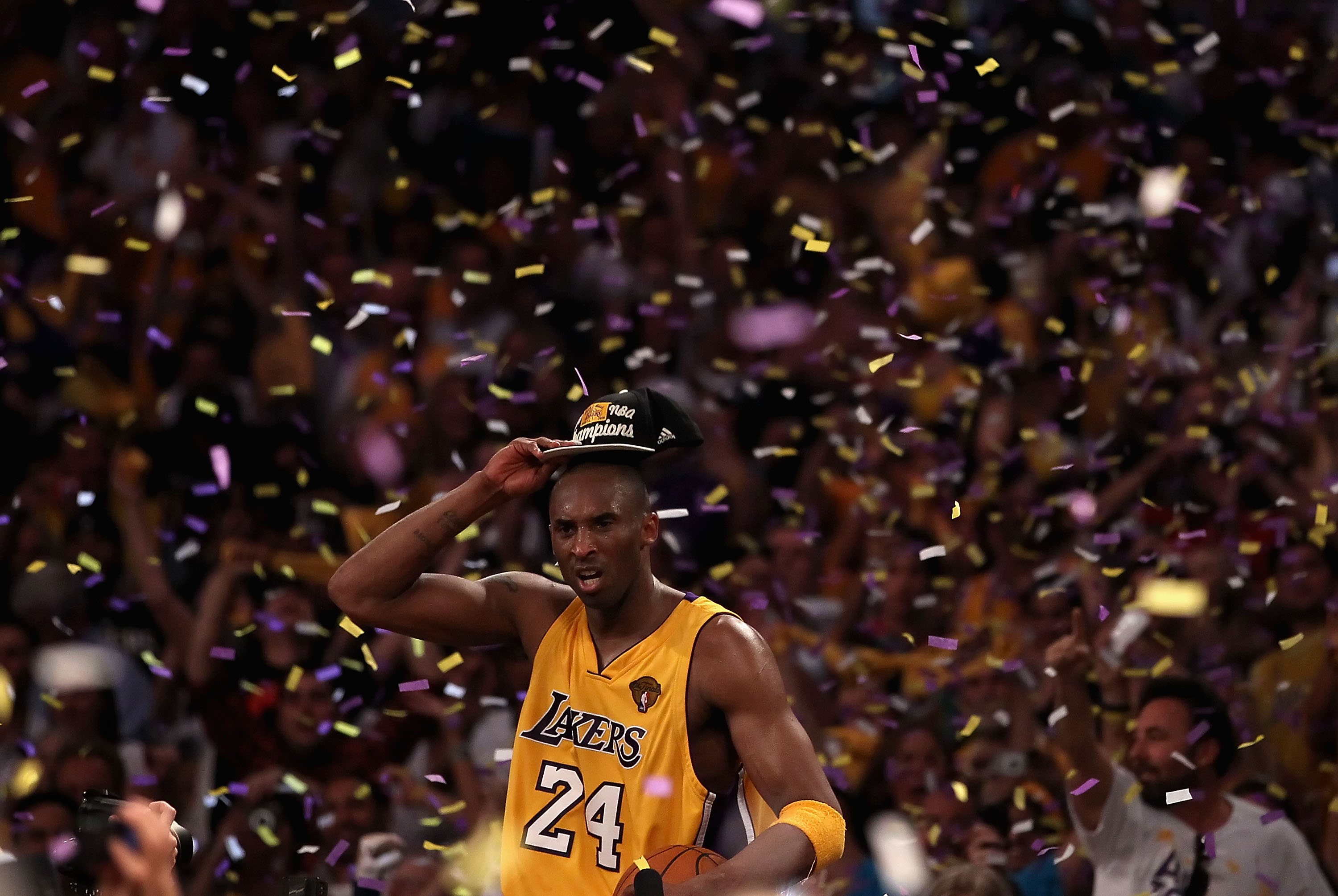 This point will be the most controversial, I'm sure.

What I mean by this is not to disparage D. Wade (MY FAVORITE PLAYER in the NBA), but as far as continually making the plays that his team needs, more often than not, Kobe does it. And let's say for the record, I am NO FAN of Kobe Bean Bryant.

Let's not go through the numerous shots he makes. He grabbed, like 15 rebounds in Game 7 (to offset his John Starks-like choking, er, shooting night). He steals the inbound pass and hits a three at the end of the half of Game 2 (when Ray Allen was killing the Lakers) to bring them within single digits. He hits Fisher for a big three in Game Seven, etc.

Wade had to do much more for the Heat the last two years as the talent was down. That being said, he has more steals and blocks than Bryant. what I am talking about are plays that define games, seasons, and championships. With the last two rings, Kobe has done it, while Wade hasn't.

When the Heat won the championship in 2006, Wade led them there by scoring 40+ a night, not doing the dirty work. I loved it. I also have to admit that right now, Kobe makes the plays that catapults his team to the ring. Wade can, Kobe does.

Miami Will Need 30 Points a Game from LeBron, But Will Not Get It! 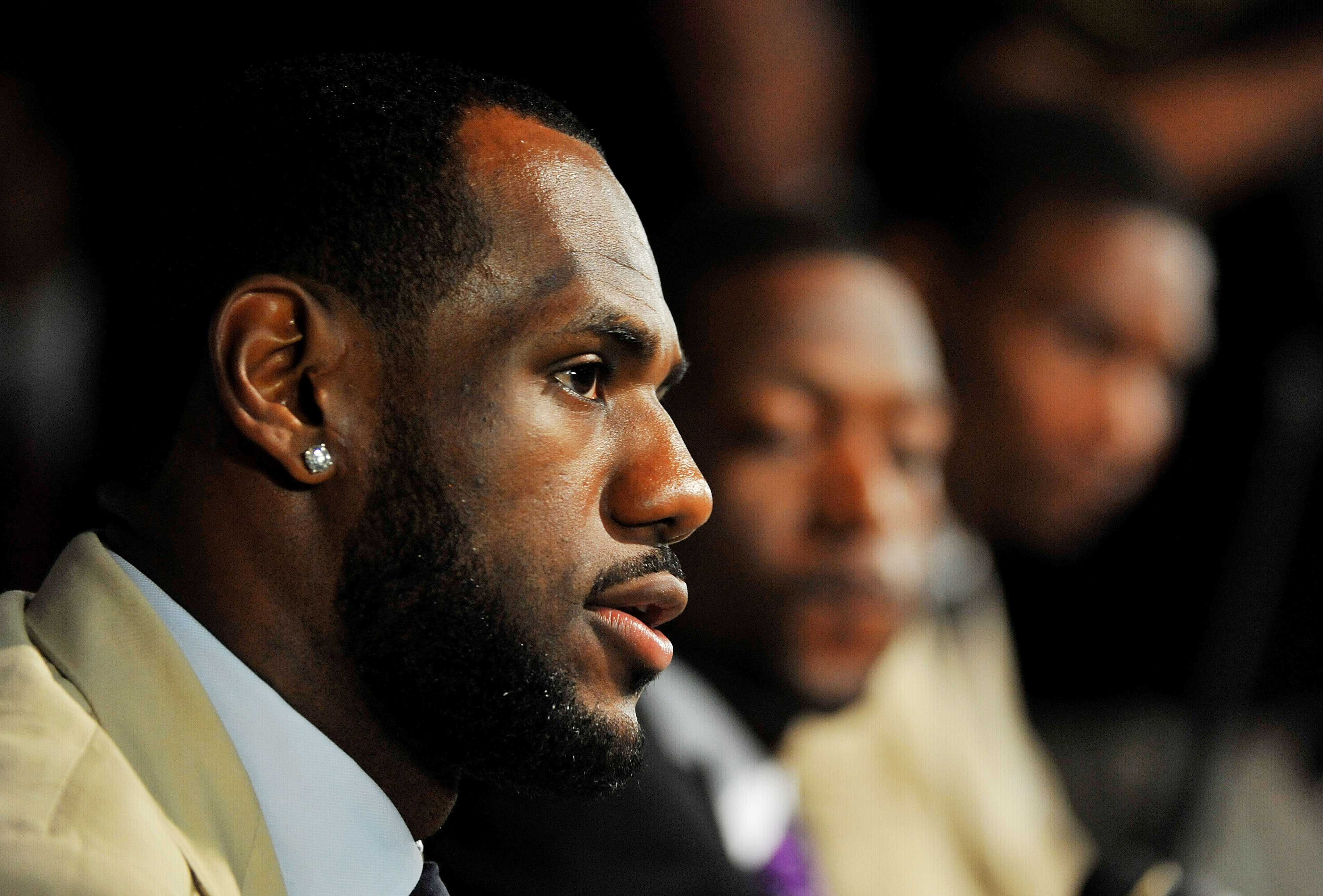 It's not that he cannot. It's that he does not.

He feels that he does not have to score in Miami like he did in Cleveland. And he won't have to, not during the regular season, maybe not in the Eastern Conference playoffs, but he will have to in the Finals.

It is not easy to do something for 100 games, then change it in the last seven games of the season. It goes against what an athlete has trained himself to do. It also goes against his nature. LeBron likes to facilitate the game as a point forward who can go off for 30 points. It is not the way he  prefers to play.

With Artest, Odom, Bynum and Gasol down low and irritants like Barnes and Ratliff, I can't see James taking it up to that level of 30 ppg. Unless he's got yet another gear.

Championship Guile - LA Has it, Miami Does Not! 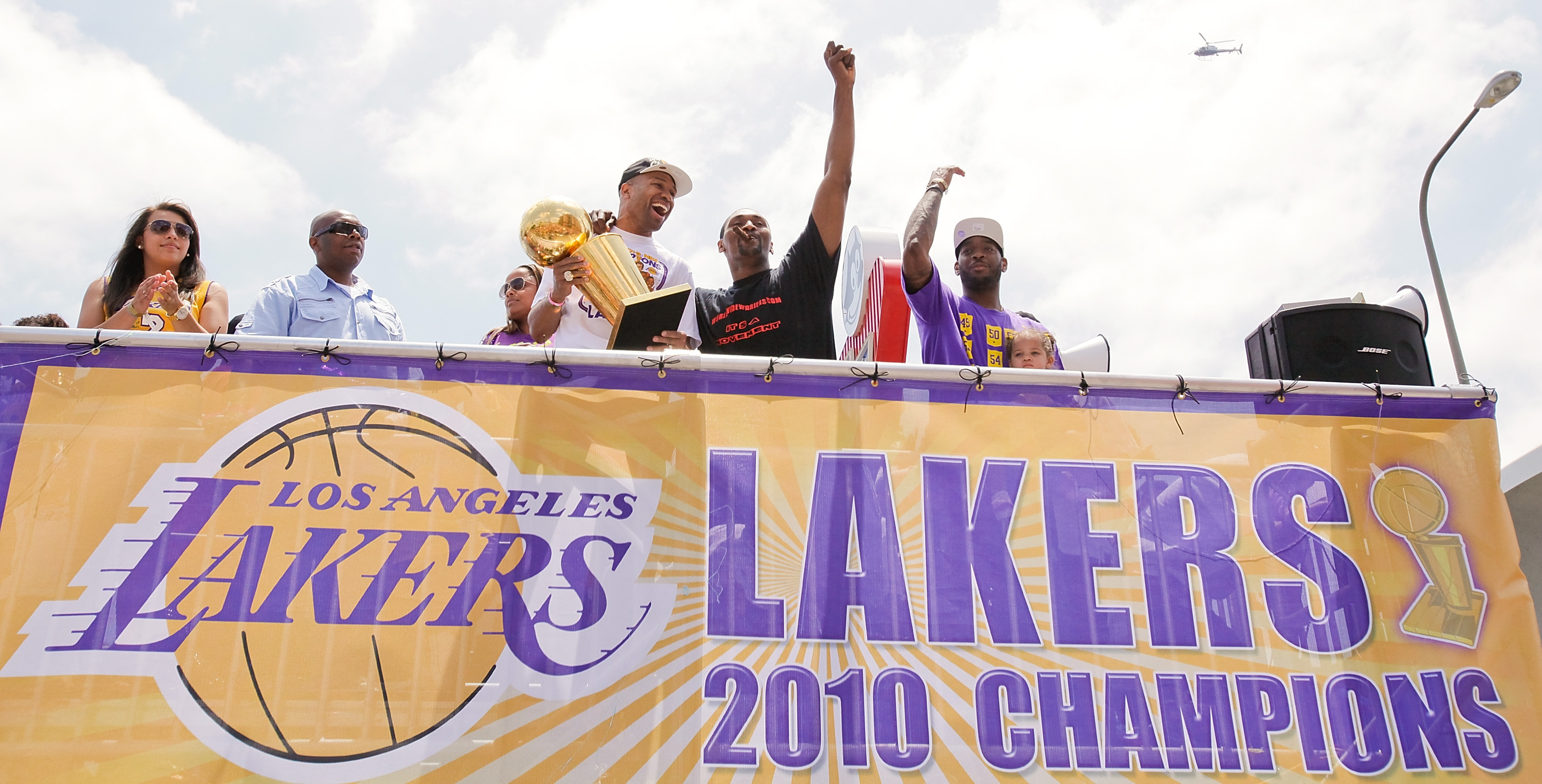 The Lakers have played in the last three Finals, winning the last two. Their entire focus is on getting to the Finals and winning it. The Heat have tried to construct a team to get there, but only Riley, Wade and Haslem have been there and won it. There is something to be said about being there, and successfully doing that.

Miami may eventually reach that mountaintop, but we have not seen it yet. This is why I put them below the levels of the Celtics and Magic, who have repped the East for the last three years between them.

The experience of the championships cannot be compared to winning the Olympics, All-Star games or pep rallies.

Kinder Whistles from the Zebras 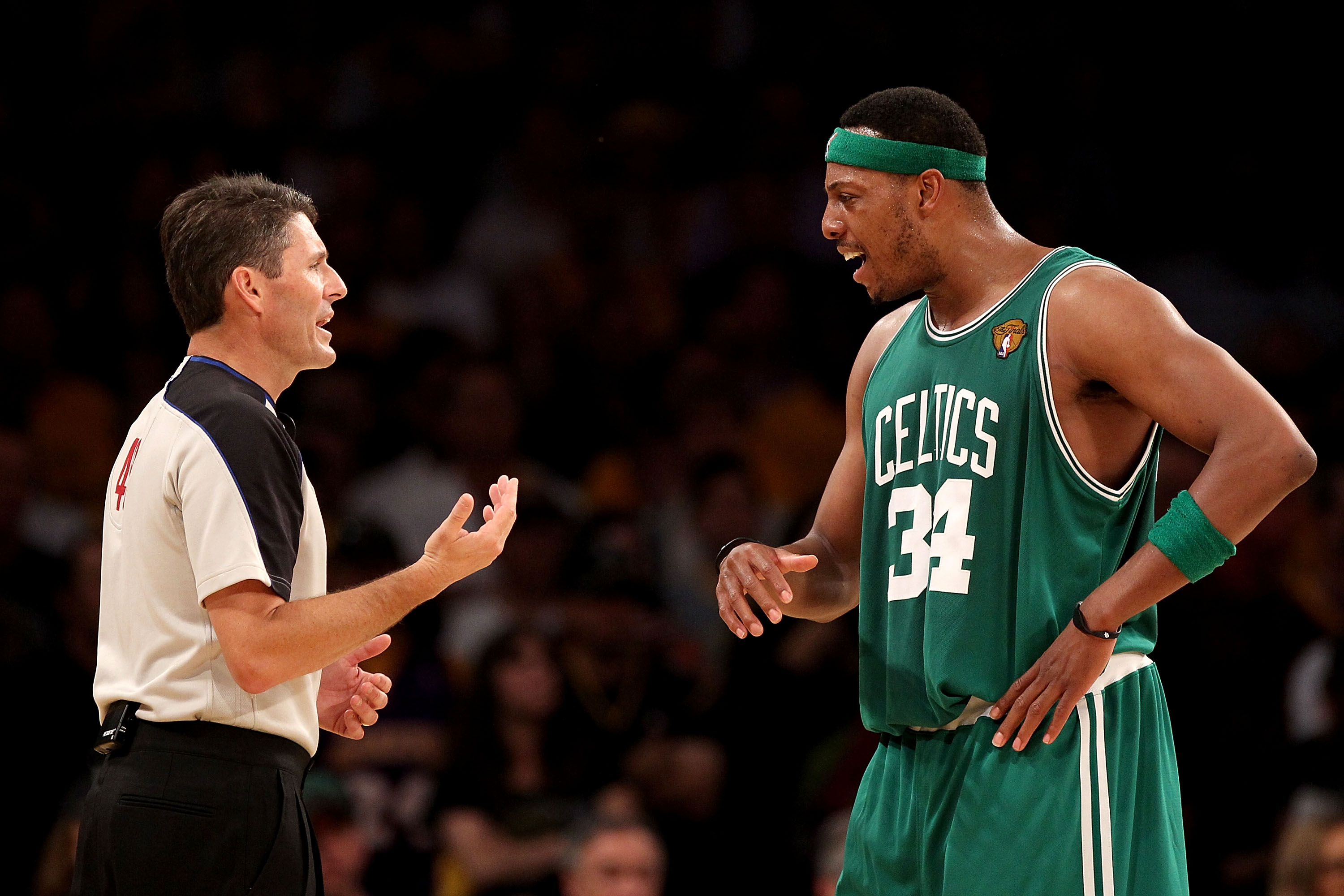 Let's face facts. Referees not only give superstars preferential treatment, they also give certain teams more or less latitude than others.  If your team gets a reputation for complaining gets a quicker whistle. Those known for a more stoic approach do not.

The Lakers are the two-time champions, and a cash cow for the NBA. I am not insinuating that plays into the way the calls go, but... 20 free throws in the fourth quarter of Game Seven? Ok.

The glamor team of the league is not done yet as far as contending for championships, and the referees will not just let Miami up and beat them without thoroughly beating them, as 50-50 calls tends to favor the champions. That's why it was such a perceived upset that the Pistons beat the Lakers in 2004, because the perception was that close games would favor the Lakers (with whistles) and so, the Pistons had to make sure games were not close.

If not, why do you think that it is easiest to repeat in the NBA than in any other major-league sport? Coincidence? I think not.

LA Can Control Tempo Better Than the Heat 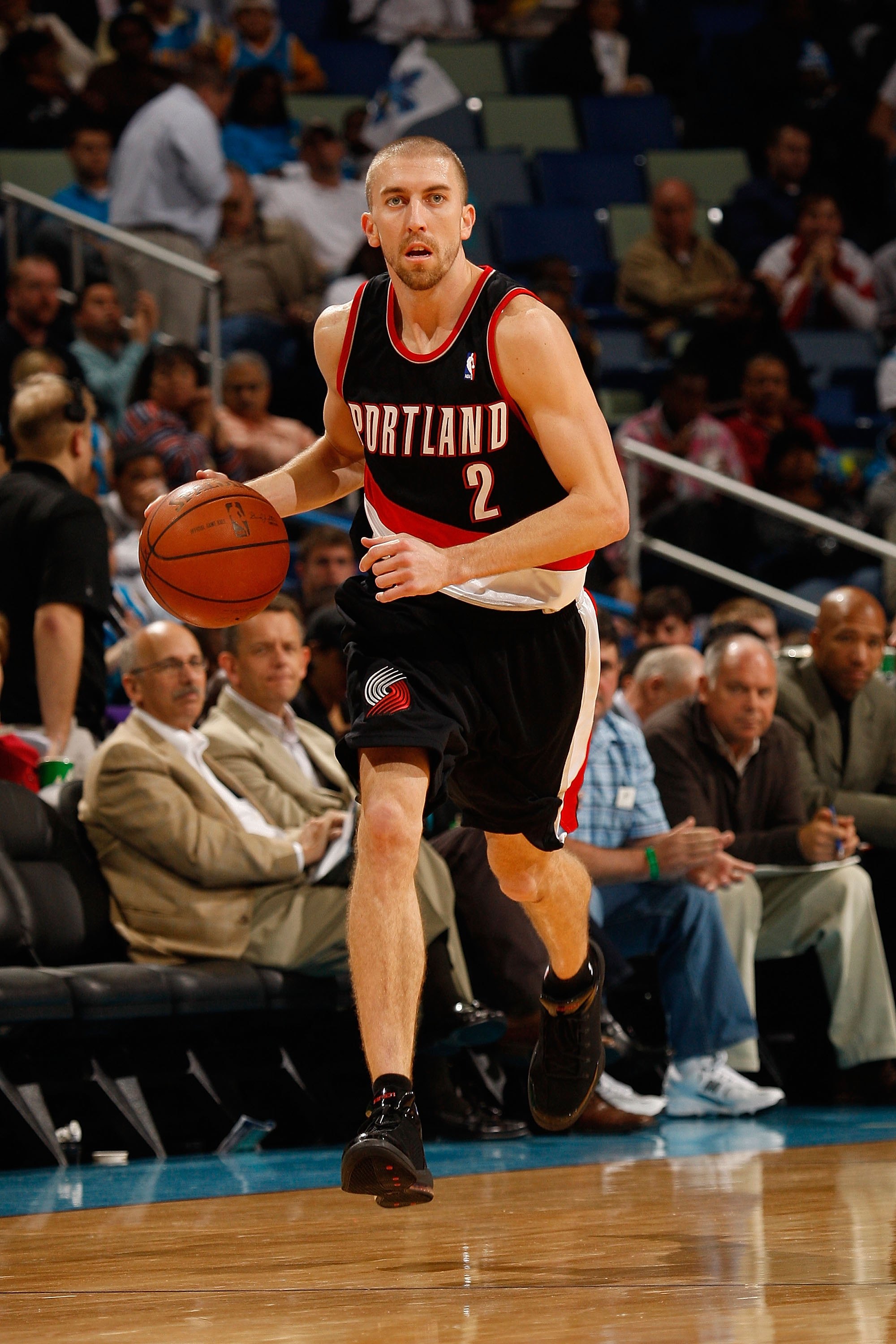 Derek Fisher (I can't stand him) and Steve Blake are better than any PGs on the Heat.

More so than just being better, they have the ability to control the game in terms of tempo. Fisher has five rings to show that he knows how to control tempo in the Finals, while Blake may be the best pure PG on either team.

Miami has LBJ and Wade controlling the tempo for them, I understand. But it is not so easy to do that, when they will also be responsible for the bulk of the scoring, defending Kobe and Artest, picking up the slack on the boards, etc. They have enough on their hands to also be asked to run the team as the coach on the floor as well.

There is something to be said about having roles clearly defined. I do not want to see LA win another ring, but if they face the Heat, they will, and this point will play no small part in that. 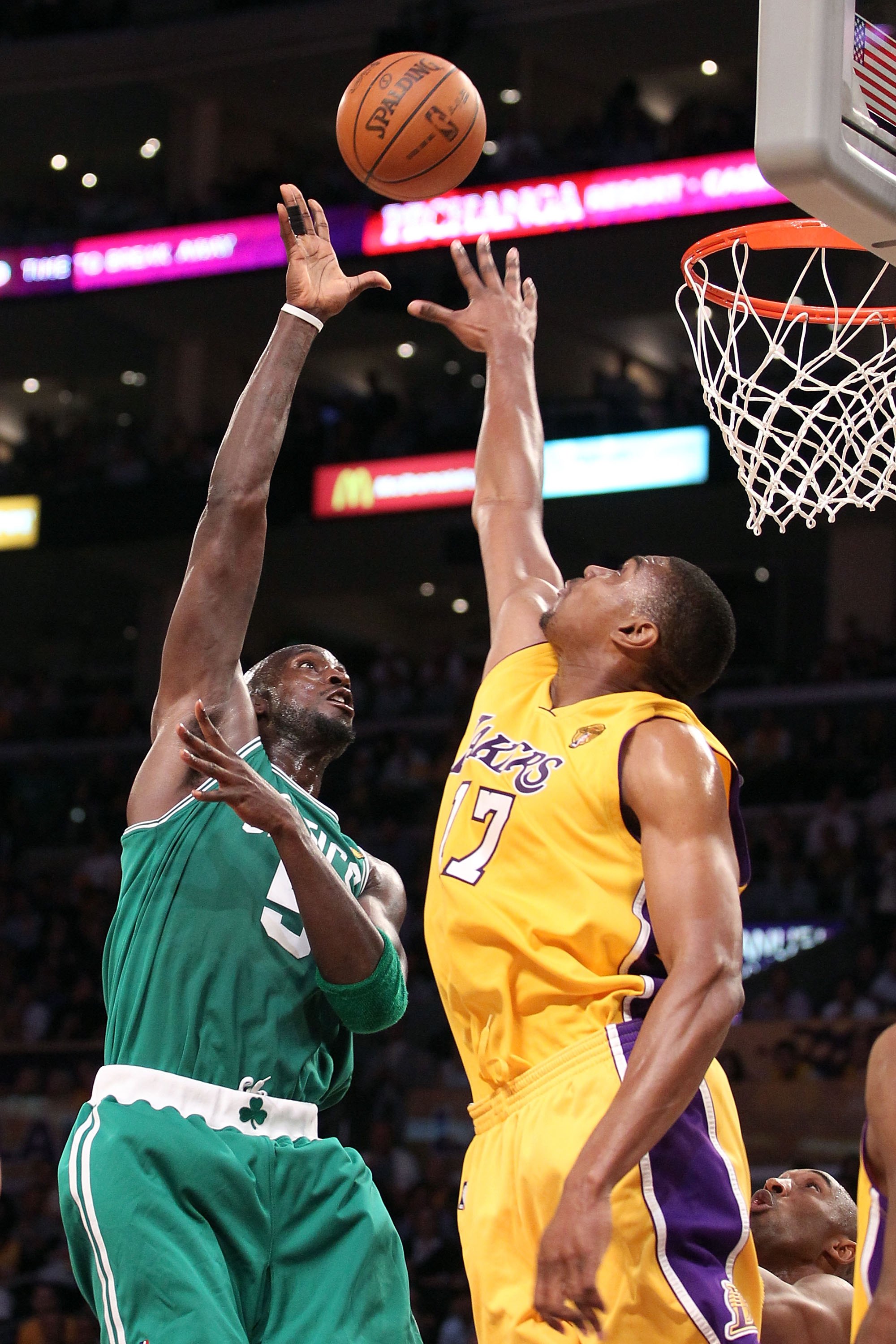 Defensively, this should not even have to be discussed. Fisher will guard tight on the Heat PG, flop when he gets driven on, and complain until the refs call it his way. Kobe and Ron-Ron will guard tight, grab and clutch and if driven on, foul or funnel into Gasol or Bynum for the block or charge.

Phil Jackson cannot be dismissed in terms of his defensive coaching ability. The triangle is "his" (Tex WInter's) best known tactic, but he really is a masterful defensive coach.

The defense the Bulls played was similar to the Lakers, but obviously Jordan and Pippen could pressure the perimeter better. But in any regards, we have no idea what kind of defense the Heat can or will play. With that in mind, the edge has to go to the Lakers, as we have seen their style win two championships, and defense is what truly wins championships.

It's not how many points a team scores, it's how many that team keeps the other team from scoring. 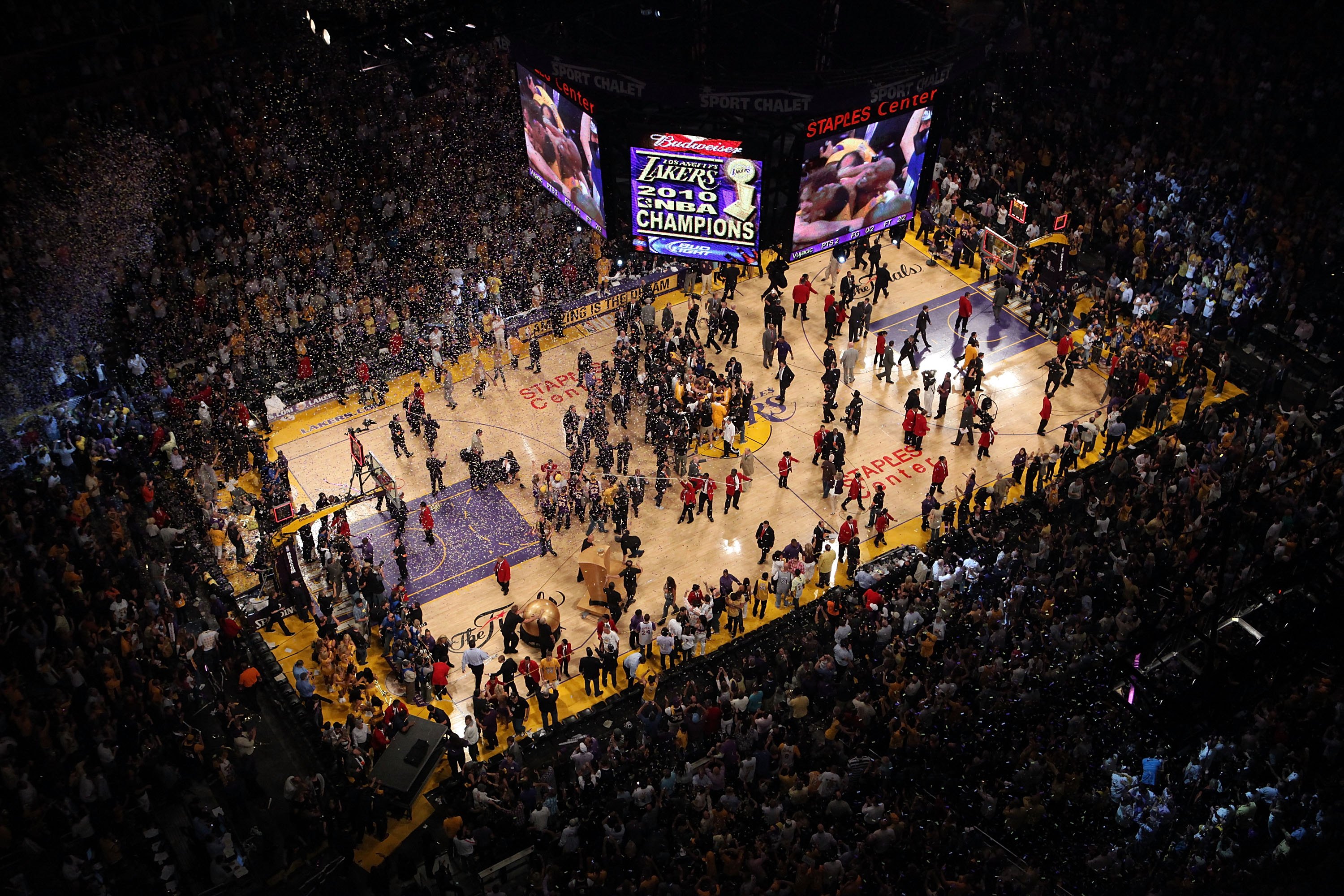 The bottom line is, the Heat are just not ready to win the NBA title. I know the millions (and millions) of newly minted Heat fans will disagree, but they are not writing this, are they?

Surely, even the most ardent Heat supporter (not any fan, post July 8th) will honestly and objectively see that their team is not ready to play the Lakers, and that the Celtics or Magic provide the best chance to beat the Lakers. Maybe after a trade or two, or a free agent signing in 2011, then so. But as far as June 2011, the Heat do not want to see the Lakers.

The Heat would win one game, because Dwyane Wade would go off for like 45 points in Game Four to prevent the sweep, and then lose out in Game Five, back in the comforts of the Staples Center. LBJ and Bosh will have mailed that game in after the first half, when the Lakers would have taken over.